Passengers waited to board the Ashmont-Mattapan trolley at Mattapan Square on Monday. Yukun Zhang photo

On board, riders offer opinions on the revamp

After they heard on Monday about the ten-year preliminary plan to phase out the 70-year-old trolleys on the Ashmont-Mattapan Line in favor of new vehicles, riders showed mixed feelings about the proposal in speaking with the Reporter.

“Those should go,” said Anne Raphael, a retired Dorchester school teacher who uses the trolleys three times a day. “Those cars are so old, and they should be replaced, not repaired.”

Other riders backed her up forcefully, noting that the rides are bumpy, heating is lacking, and the cars are not ADA compliant.

“The old trolleys are not handicap accessible, not just for people who are handicapped, but for mothers,” said Diamond Johnson, 25, who takes the line every day. “We have to carry our stroller all the way up the stairs to get on the trolley. It’s a lot of work and it holds up time… It feels unsafe and a lot of people don’t want to use it,” she said, pointing to the platform in Ashmont station. 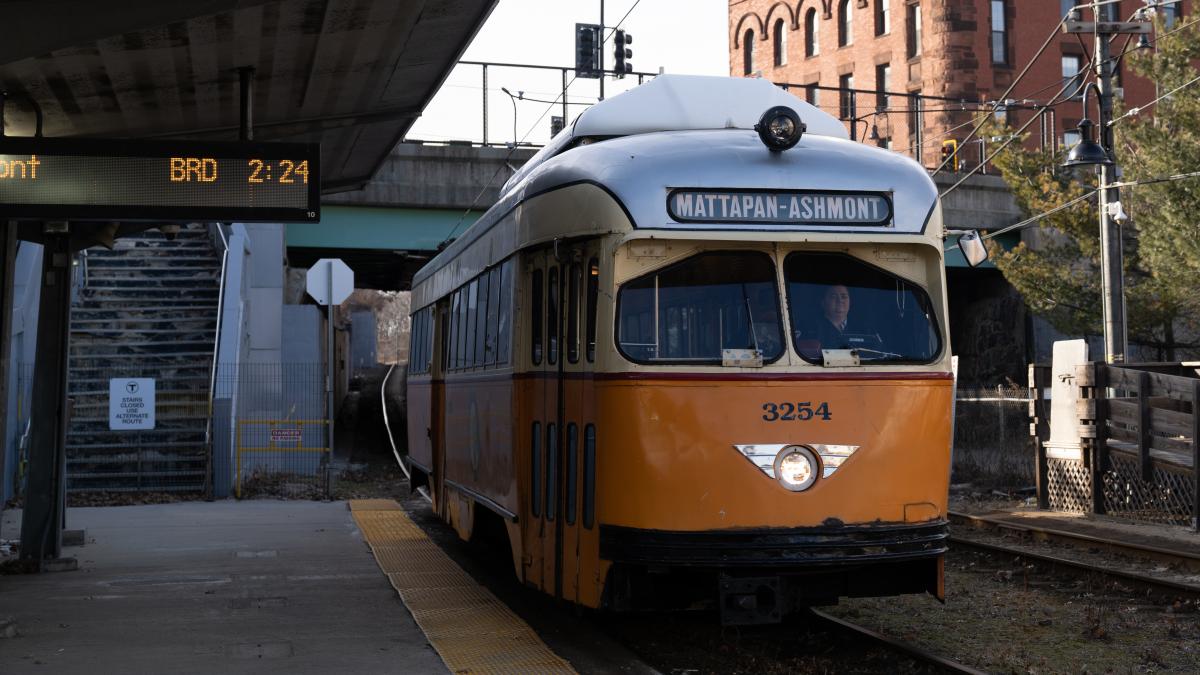 But some riders, both old and new, don’t see the need to update just yet.

Chaurice Jones, a homemaker from Mattapan, said she never had a problem with the trolleys. She said the rides are not crowded and the drivers are courteous and friendly.

Cedny Vargas, who is from Colombia and is learning English in Boston, said she has been taking the trolley twice a day for two months, and has no complaints. “I don’t see why they need to change it. It’s cozy, and I don’t feel cold inside. The drivers are really nice. They say the stops because the trolley doesn’t show stops.”

Weighing in, Coleman, a dishwasher from Hyde Park, said, “There was that year when we’ve got all the snow that they weren’t running, but most parts I think they are reliable.” Je added that he loves the history of the trolley and noted that new cars would be expensive.
Coleman is not the only one who’s concerned that using new vehicles might cost riders more.

Crystal Dias, an executive assistant from Milton who had just taken her first ride on the Mattapan line, said the trolley seems even better than some of the other trains. She noted that the MBTA is raising fares even though “the service doesn’t get any better,” and said she hopes trolley riders will not charged more to pay for the new car.

Fans of the Mattapan trolley understand the need for new vehicles, and are relieved that MBTA’s study showed that paving the railway for buses not a viable option due to cost.

State Rep. Dan Cullinane— who has been the leading political advocate for the trolley line— sees the gradual move from PCC to type 9 light-rail vehicles as "common sense" and as a "win-win.”

"What we saw in MBTA’s report is what we felt from the beginning, which is that the line is in need of significant public investment," added Cullinane. "At same time, what we saw in report is that preserving trolley vehicles would be most cost-effective way to do that."

“It’s not every day in a public policy discussion that doing the right thing is also the cost-effective thing,” he said.

In other rider reaction: Nora Manley, a Mattapan resident who has been using the trolley for over 20 years, said she’s a fan of the old cars but they won’t last forever; Joseph Scolastico, a Weymouth railfan, said it’s good that the old PCC cars will still be on the rail for the next eight to ten years, and that the line will not become a busway; Bob Shoring, a San Francisco retiree who used to live in Boston and take the trolley, shares the distaste for buses.

“Streetcars or light rail vehicles are normally smoother and more comfortable to ride than buses. Also, being electric, they don’t pollute and can accelerate faster. If they replaced them with buses it is likely that fewer people would ride,” he said.

Rep. Cullinane agrees. "Buses are going to mean the line is down for the longest period of time, and given that it's also the most costly, I think it's something that's a non-starter for the community, and the report by the MBTA bears that out," Cullinane said. "I've heard it loud and clear that the community wants to keep trolleys on the track. I don’t think that there is any doubt where the community stands."