Suffolk County voters made a series of paradigm-shifting choices at the polls last week, among them electing the first woman of color as the Democratic nominee for the Suffolk County District Attorney's post.

“Boston is changing,” said Rachael Rollins in an interview with the Reporter in her Jamaica Plain campaign office on Tuesday, “it really is. I know we have a history. I know there are people that aren't from here that only remember the Charles Stuarts and the busing and the other things. But we're changing, and we are progressive, and we are thinking creatively about big issues and I'm excited to be a part of that.”

Rollins, 47, the former head of the legal departments for major state transportation agencies and a biracial black woman, came out on top of a competitive five-person Democratic field with 40.47 percent of the vote. She ran on a progressive platform in a field with several progressive choices, pledging to eliminate cash bail and mandatory minimums and lead an office that will more closely reflect the communities it serves.

She will likely be the next district attorney although she has a challenger in the Nov. 6 election, independent candidate Mike Maloney. Her win would usher in an unprecedented moment when the top law enforcement officials in the county – Boston Police Commissioner William Gross, Sheriff Steve Tompkins, and herself – will be people of color.

Greg Henning, former head of the district attorney’s gang unit, was seen as the more traditional pick (he was endorsed by outgoing DA Dan Conley and had the support of much of the existing office and law enforcement agencies). He ultimately pulled in 22 percent of the vote, followed by state Rep. Evandro Carvalho, Shannon McAuliffe, and Linda Champion.

Rollins was complimentary of Conley in the interview. She said that he had talked to her after her win for the first of what she hopes will be many conversations leading up to and following November. Another DA, Essex County’s Jonathan Blodgett, president of the National Association of District Attorneys, reached out to her early on and has been in touch with her post-election.

“I was not the predicted winner, right,” Rollins said, “I think, by anybody aside from me and hopefully my team, but I think there are a lot of people that are worried and scared about their jobs. They backed the candidate that was in the office and they backed him strong.”

So she expects some turnover -- “people that are not interested in working under my administration” – and plans to bring in people for a few positions personally before being “deliberate” about who comes into the office going forward.

The DA’s office is in good shape, Rollins added emphatically, with “exceptional people there” serving as lawyers and general staff alike.

She hopes to operate in the mold of Philadelphia’s new district attorney, Larry Krasner, and Chicago district attorney Kim Foxx, both of whom are progressive departures from prior administrations. 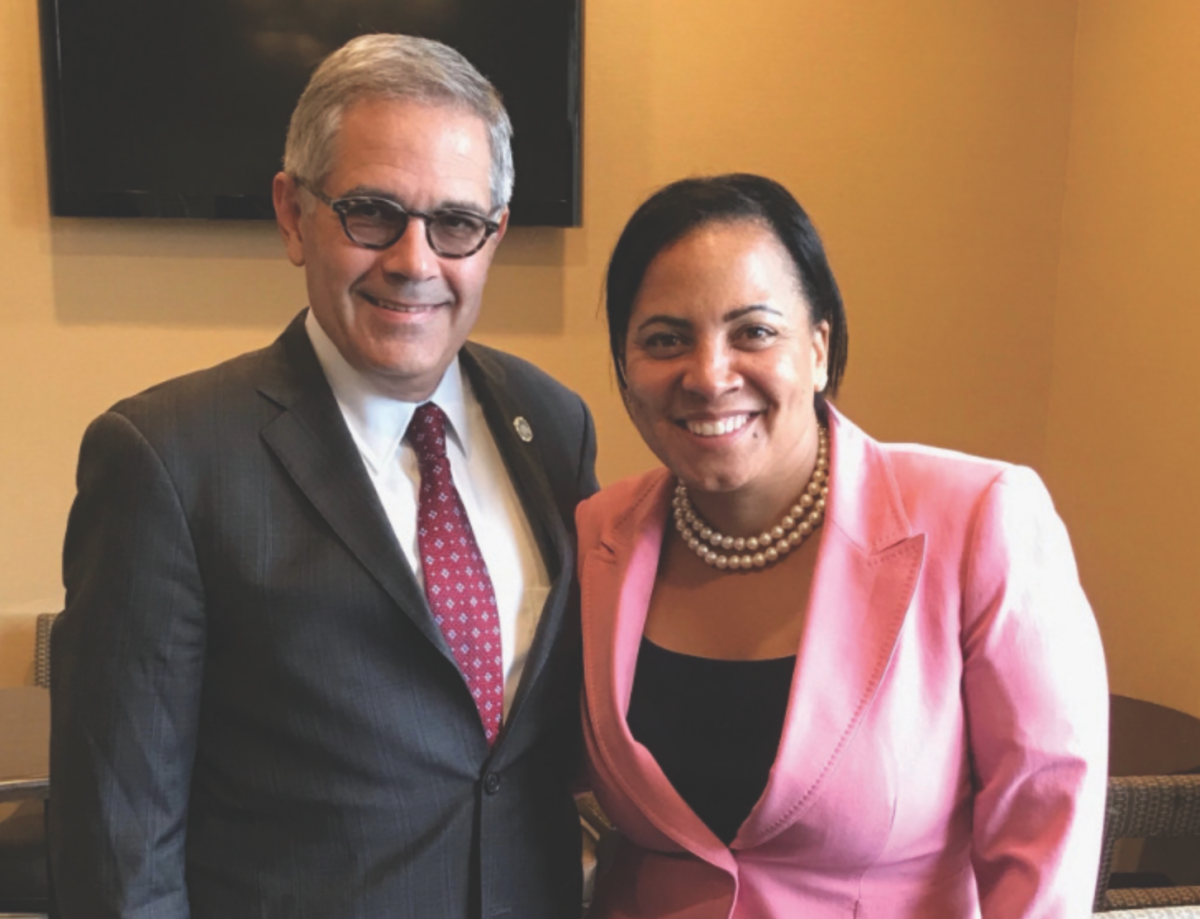 Noting that the re-elected Middlesex DA, Marian Ryan, is the only other woman to hold a district attorney position in the state, Rollins said, “law enforcement is an incredibly male-dominated field, and so I think it's going to be exciting if I'm successful in November to have another voice there, another perspective as a woman. And then I will be not only the first female DA in the history of Suffolk County, but the first woman of color [DA] in the history of the Commonwealth.”

The campaign was a rollercoaster ride, she said.

“The high point was surely winning with 40 percent of the vote when everyone said that the progressives would split and the people of color would split,” she said. “And I just said to our team, ‘Let's prove them wrong and we're gonna win soundly.’ The low point was... I think it got personal for some of the candidates. And when people call to question your character, it hurts.”

Rollins recalled walking into her offices at the conclusion of a long election day of campaigning, starting with an early morning vote and ending at the polling location at English High School – “a nice circular end because that's where our first forum was” – and being met with a disquieting sight.

“I looked into the situation room and my campaign manager was crying, and not just crying but like Alice Cooper.” She gestured at her face, miming a flood of tears. “I thought, ‘Oh my God, we got four votes, right?’”

It was quite the opposite. The early returns were looking good, and as Rollins worked on her victory and concession speeches, the office was punctuated by delighted shrieks as more and more poll results came in. It didn’t feel real when Henning called to concede just after 9 p.m.

That initial doubt stemmed from a sense that the odds had been stacked against her. Yes, her campaign was working hard and she was strategically locking down endorsements and alliances on the national and local level. But she knew she had a hard lift.

“We didn't have enough money for polling,” she said. “We were outraised two to one by the presumed next district attorney, and that individual had the backing of the incumbent and all of the, I will say, politicals in Boston, many of whom are Irish.”

Rollins likes to say that she is the “new Irish,” the daughter of an second-generation Irish-American man who served in the Vietnam War, later became a corrections officer, and then worked for the Boston Public Schools for 40 years. 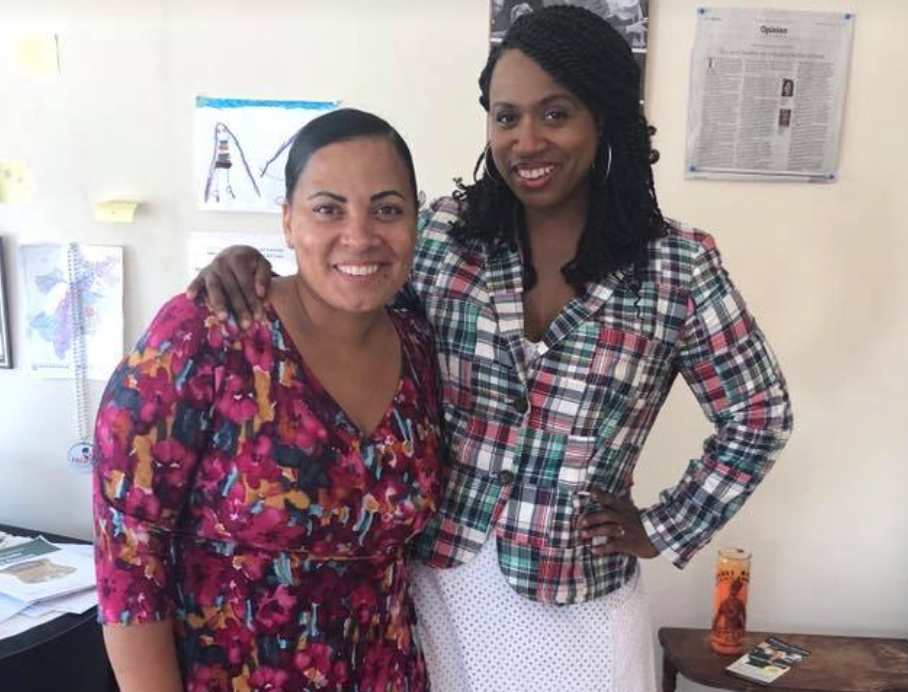 Rollins and City Councillor Ayanna Pressley, right, talked after their respective primary wins. She spoke admiringly of Pressley and the two other women of color who came out on top, Liz Miranda and Nika Elugardo, in the interview. "The grace {Pressley} showed, the perseverance she showed every day moving forward, I learned from that. She's much more graceful than I am, you know, my elbows are a little bit sharper and I hope people want, in a DA, a fighter."

Further reading: Ayanna Pressley: says her election is ‘A mandate for hope’

Throughout the campaign, she bristled at the thought of being pre-judged, and made the effort not to do so with her district. “I would be very offended if somebody made assumptions about me,” she said. “I cannot do the same to certain neighborhoods and we won in places no one would have thought we would win in because we treated them with the respect of earning their vote and not assuming anything about them. So we worked really hard.”

Shortly after her win, critics including police and business owners jumped, alarmed about a policy proposal outlined on her campaign website: a list of charges that her office would decline to prosecute by default, among them trespassing, shoplifting, larceny under $250, breaking and entering into vacant properties for the purpose of shelter, drug possession with intent to distribute, and resisting arrest.

These charges could ultimately end up in criminal court if her assistant district attorneys made a compelling case to her that action was warranted, she noted, but they would not be the primary focus of her office.

“I met with assistant district attorneys, CPCS lawyers, judges, to say, look, my goal as the DA is to keep Suffolk communities safe and to get justice for victims,” she said. Rollins pointed to the Washington Post analysis that found lower clearance rates for homicides of black individuals than white ones. The region sees between a 4 and 15 percent clearance rate of nonfatal shootings.

“I want to focus my brilliant assistant district attorneys’ attention – not all of it, but more of it – on the violent crimes so we can stay safe,” she said. “When I proposed, as a candidate, a list of cases that I would consider making a civil infraction or deferring outright, it was after many, many hours and much deliberation with the input of experts to say what are the cases that we believe are clogging up the system, and possibly first or second offenses or maybe even a third would be better handled as a civil infraction, or make them do community service or get them shelter.”

Rollins said she hears the small business owners who see the list and think of the lost inventory and the need for penalties, but in her understanding, she said, the majority of shoplifters get caught reasonably soon in the store or just outside, and the inventory can be recovered.

“My number one priority is getting the merchandise back to the owner and then hopefully getting the person some services or stay away [order], but also not staining or branding them with a conviction that will then result in them potentially not being able to get housing, an education, or other things like that.”

Similarly, breaking and entering into vacant buildings are crimes of desperation, she said, and should be handled as such. She added that she has spoken to Conley about the proposal, and she will speak to Michael Leary, president of the Boston Police Patrolmen's Association, this week, with plans to also talk with Commissioner Gross.

The post-election blowback was “a learning experience” about campaign commitments, Rollins said. DAs often do not prosecute all petty crimes, she said, but it can be jarring to see that habit written down as policy.

“I think one of the greatest parts about what I'm doing that I don't think happens often is I'm speaking about them and putting them in writing,” she said, later adding, “So all of this outrage and alarm is only because I said it out loud, but it was already happening in many circumstances.”

And what has been written down may not be the policy’s final form, Rollins said, although she feels strongly about the spirit of the proposal. 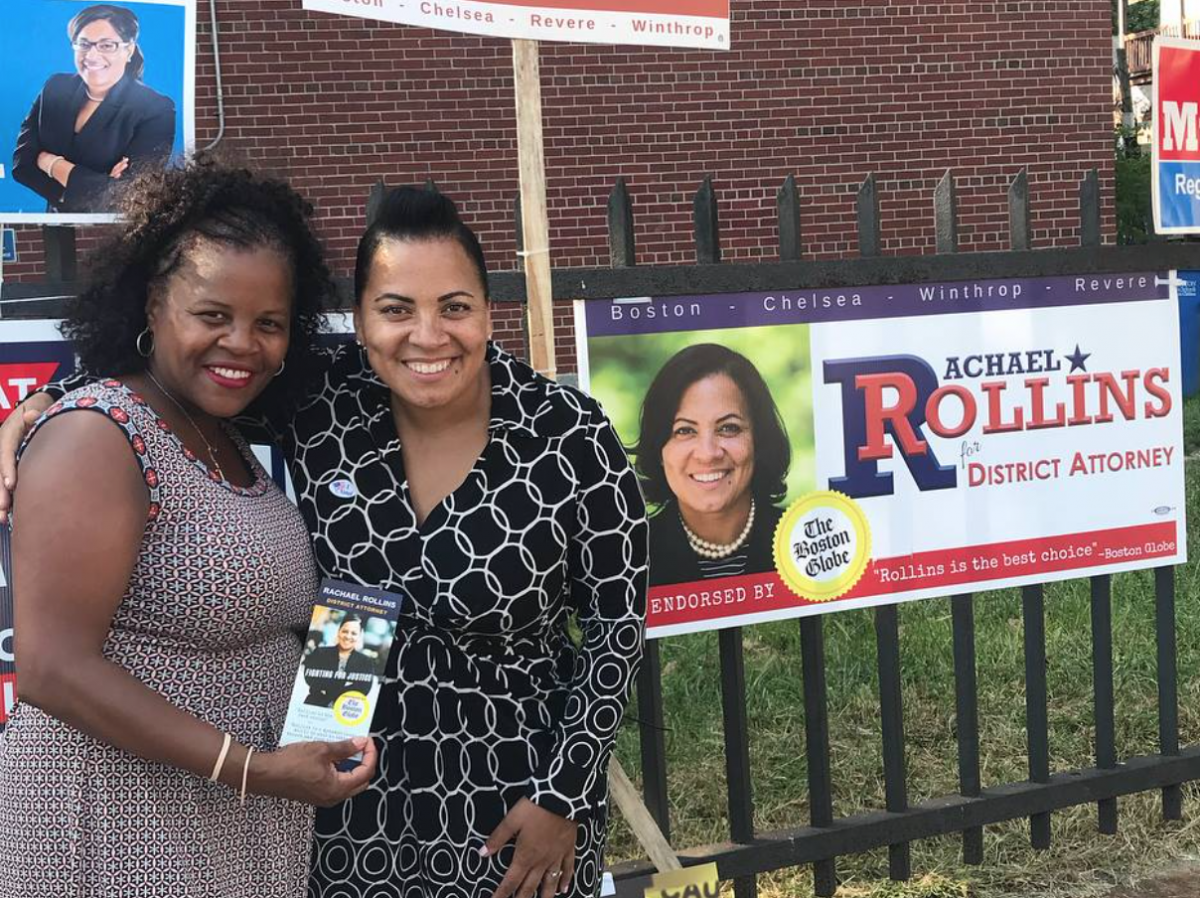 Kim Janey, at left, supported Rollins in the race, as did City Council president Andrea Campbell and councillor Lydia Edwards. Looking ahead, Rollins said, "my only number one on my to-do list is win November 6," she said. "Look, what I will say is that we do have an eye, with the hope as the Democratic nominee, that I'm going to start lining up support from my other Democrats on the ticket."

Her collaborative approach would extend outside of the law enforcement sphere, Rollins said. She plans to go out into Boston, Chelsea, Winthrop, and Revere and solicit feedback on her campaign policies before fine-tuning them for the office.

“One of the things I work really hard at doing is not being combative,” she said, “is making sure that I have data to support what it is I'm saying, and I'm shutting up and listening to what it is other people are saying to me, because their opinion is just as important as mine.”