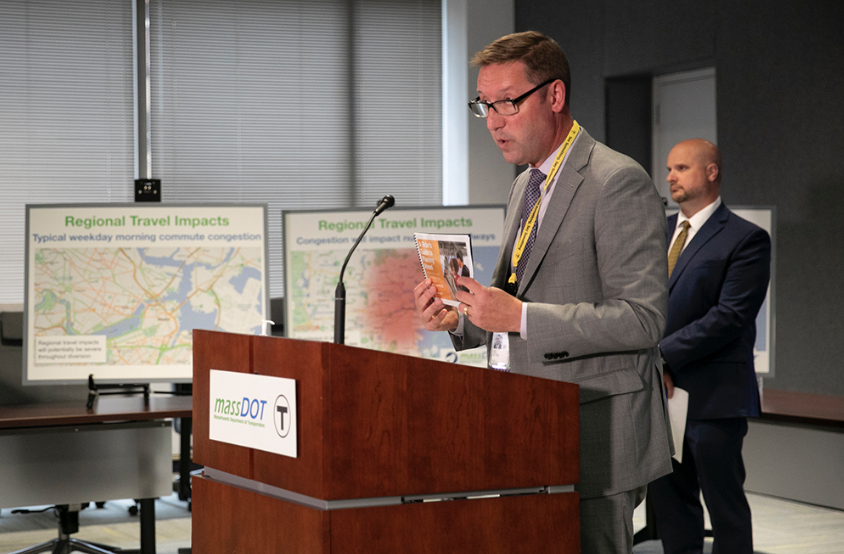 MBTA General Manager Steve Poftak flashes a printed version of a 16-page "Rider's Guide to Planning Ahead" as the T prepares for a 30-day Orange Line shutdown to begin Friday. Chris Lisinski/SHNS photo

You’ll be hard pressed to find anyone with a pulse who’s thrilled about the prospect of moving around the neighborhoods of Boston over the next month. It’s going to be a hardship, particularly for folks accustomed to commuting on the Orange Line. That number includes thousands of Dorchester and Mattapan residents who make their way around from Forest Hills or Roxbury Crossing or Ruggles, often via the bus system.

And it’s certainly not going to be a pleasant experience for motorists and cyclists who will share the roads with a conscripted crew of coach buses starting this Friday.

It’s very much in vogue right now to flog the MBTA system and its leadership. It’s a sort of rite of passage for Bostonians old and new to bemoan the state of the subway and belittle those who run it. If there’s one common denominator for this famously balkanized city and its streetcar suburbs, it’s hatin’ on the T.

But what if— in this moment of gravity and collective misery— we try a different tack. Can we dig a bit deeper, “chin-up” as the Brits might say, and find a well of goodwill and esprit de corps to support what could be— if successful— a fine feat of engineering and civic resolve?

Let’s start by hitting pause on the unhelpful suggestion from some political quarters in the last week that the top brass at the MBTA should be replaced. It would be folly to change leadership on the brink of what everyone agrees is an unprecedented attempt to squeeze five years of repair work into a pair of fortnights. Let’s instead embrace the bold thinking behind tearing off the Band-aid and expediting fixes that are clearly long overdue. Can we put aside the blame-game— albeit temporarily— and just try to get the problem resolved?

In a matter of five months, give or take, we’ll have a new governor in place. Short of some cataclysmic, extinction-level event transpiring between now and Nov. 8, what is now Mr. Baker’s Transit Authority will be Maura’s Big Transportation Agency come the ides of January. On Tuesday, the current attorney general and presumptive Democratic nominee laid out her transportation platform, with a heavy dose of prescriptive measures for “the failings at the MBTA.”

There’s plenty of promise in Healey’s 3,000-word plan, including a commitment to turn the Fairmount commuter rail line that runs through our neighborhood into a viable rapid-transit line. (The Fairmount, by the way, should be an alternative of first resort for many Orange Line cast-offs this month.)

Healey’s plan also includes appointing a new general manager— which presumably means brooming the current GM, Steve Poftak. Our next governor certainly has that authority. And Poftak—well-liked and respected on transit matters long before he answered the public service call to lead the troubled T— might actually be well-served not having to worry about job security as he oversees this mammoth Orange Line project.

But here’s a wild proposition: Why don’t we see how this next month goes and do our part to help it go as smoothly as possible? Maybe this radical shut-it-down to shape-it-up approach will be the right medicine. It’s worth a shot.