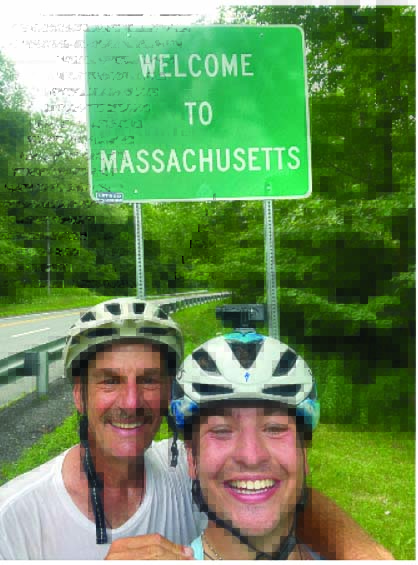 After eight weeks of trekking across the United States (and parts of Canada) on bicycles, a father-and-son team from Carruth Street are due to dip their tires into the waters of Southie’s Pleasure Bay on Wednesday afternoon, marking the end of a remarkable adventure through eight US states and Ontario that’s been more than just a fantastic bonding experience for Josh Nagy and his dad, Carl Nagy-Koechlin.

They are cycling to raise money and awareness to combat homelessness. So far, their Riding for Home effort has brought in $16,000 for the Pine Street Inn and the National Alliance to End Homelessness.

The duo began their 3,600-mile journey on Memorial Day from the edge of the Pacific Ocean in Washington state. Josh had just graduated from the O’Bryant School in Roxbury and his 61-year-old father runs a Cambridge-based nonprofit.

If you are looking for a great summer read, consider stowing your beach paperback for an hour or two and taking a deep dive into Carl and Josh’s excellent online blog that has been detailing their trip in installments at their website. You can make a donation to their effort there as well.

“Josh eats slowly and rides quickly. I ride slowly and eat quickly. Take the best of both of us and we’d be home by now,” Carl wrote in a recent post. “But what’s the hurry, right?”

The travelogue is well-written and beautifully illustrated with their snapshots from the shores of Lake Michigan, Glacier National Park, and, yes, a drive-up window at a Dairy Queen in rural Minnesota.

At its root, theirs is a charming story of a father-son bond that is candid, funny, and motivated by a compassionate spirit that will ring true to so many of our readers who know Carl and Josh and their family. It’s also a fascinating window into what both of them acknowledged going into the trip is a deeply divided and troubled country— most of it through “deep red territory.” Their entries offer anecdotes about their unease with— as Carl writes— the “assault of angry and often vulgar right-wing political signs, flags, etc.” along the way.

And yet, the optimism and positive energy that keeps them pedaling is undefeated. They see the good in people— even the two older gents in Michigan, one wearing a hat that read: “You’re damn right I’m mad.”

Carl again: “And yet the two of them were as nice as could be. They were impressed with our undertaking – both the cycling and that we were raising money to address homelessness…It was nice to connect, but I assume we then went back into our divergent worlds, with completely different understandings about what’s wrong with the world.”

On Wednesday, when they spin their last lap on the beaches of Castle Island, there’ll be nothing but good vibes showering Carl and Josh.

Do yourself a favor: Go read their account. And hit that donate button. It’s a hometown effort that deserves our full-on support.