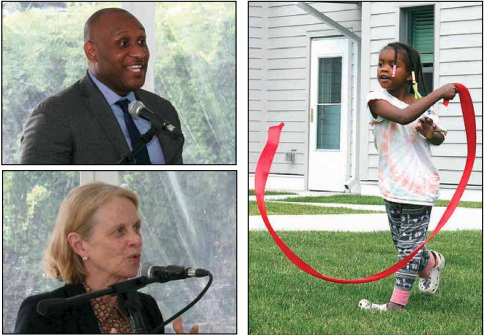 Below left, Caribbean Integration Development Corporation (CICD) President Donald Alexis notes that a blighted property that was an embarrassment to the community has now become a community asset. Bottom left, Mayor’s Office of Housing Director Sheila Dillon congratulates the community for pushing the city to release the property for development. Bottom right, new Cote Village resident Nala Castro dances on her new lawn with a piece of the red ribbon that was cut to formally open the development. Seth Daniel photos

The addition of 76 new affordable units of housing in any Boston neighborhood is an achievement worth celebrating these days. But last month’s ribbon-cutting at the Cote Village development in Mattapan was more than just a one-off victory for the impacted residents and immediate stakeholders. It marked a notable triumph in an ongoing struggle over the forces of disinvestment, blight, and pessimism that still cast a long shadow over large parts of our city. 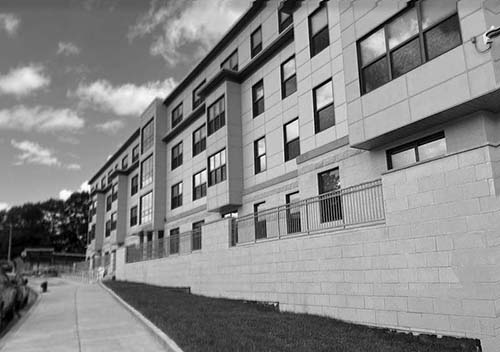 Above, a look at Cote Village from Cummins Highway (this photo was altered to eliminate graffiti that marred the exterior wall).

This once-forlorn corner of Cummins Highway and Regis Road, once home to a thriving Ford auto dealership, was not singular in its decrepitude. The neighborhoods we cover are pock-marked by other shuttered businesses and industries that gave up their ghosts long ago while leaving their carcasses to rot along main thoroughfares, side streets, and riverbanks. Over the decades, our neighbors and allies in government and business have fought hard to clear the remains and make room for new assets — parks, community gardens, mom-and-pop businesses, restaurants and, yes, homes.

It can be hard enough navigating the path to renewal in neighborhoods already beset by ritualized disinvestment, environmental damage, and general neglect. But in some cases, the road to resurrection is made more arduous by homegrown obstacles. Such was the case with the Cote Village project, which took a decade-and-a-half to evolve from its origins within the Menino administration to occupancy under Mayor Wu.

One reason: a toxic stew of ignorance and mischief, sourced by abutters with selfish motives who petitioned to block the new building. Thankfully, they failed, in part because their objections were without merit. They failed, too, because political leaders rallied the good people of Mattapan to support the site’s redevelopment. It helped that a succession of state leaders— including my spouse, former state Sen. Linda Dorcena Forry and her colleague, state Rep. Russell Holmes— pushed hard to bring a new MBTA commuter rail platform to completion next door.

It took political capital and courage to make the costly but necessary investments in infrastructure to help seed housing starts like Cote Village and the mixed-use project now rising from the old parking lot next to the trolley station in Mattapan Square.

Thankfully, there are partners in the development community whose mission and purpose align to make difficult projects like Cote Village possible. The Caribbean Integration Development Corporation, led by Donald Alexis, and the Archdiocese of Boston’s Planning Office of Urban Affairs, which teamed up on the Cote development, are two standouts in this regard. Thanks to their unswerving focus through sometimes contentious community meetings and a challenging building project punctuated by a pandemic, there are 70-plus people and families now living in new homes in a beautiful setting.

And their partnership is now at work to transform another longtime blight on Morton Street— the long abandoned, now bulldozed police station next to the train tracks— into new homes as well.

Cote Village and other projects like it do more than just nudge our city closer to policy goals for housing people. There are intangible benefits, like reversing the daily toll taken by decay and dereliction long inflicted on neighborhoods like Dorchester and Mattapan. Turning a blind eye to blight reinforces the message that our communities matter less and that our kids should settle for less.
Kudos to all of those who’ve joined together to reject that backwards premise and to bring affordable, safe, and dignified living choices to our neighborhoods.