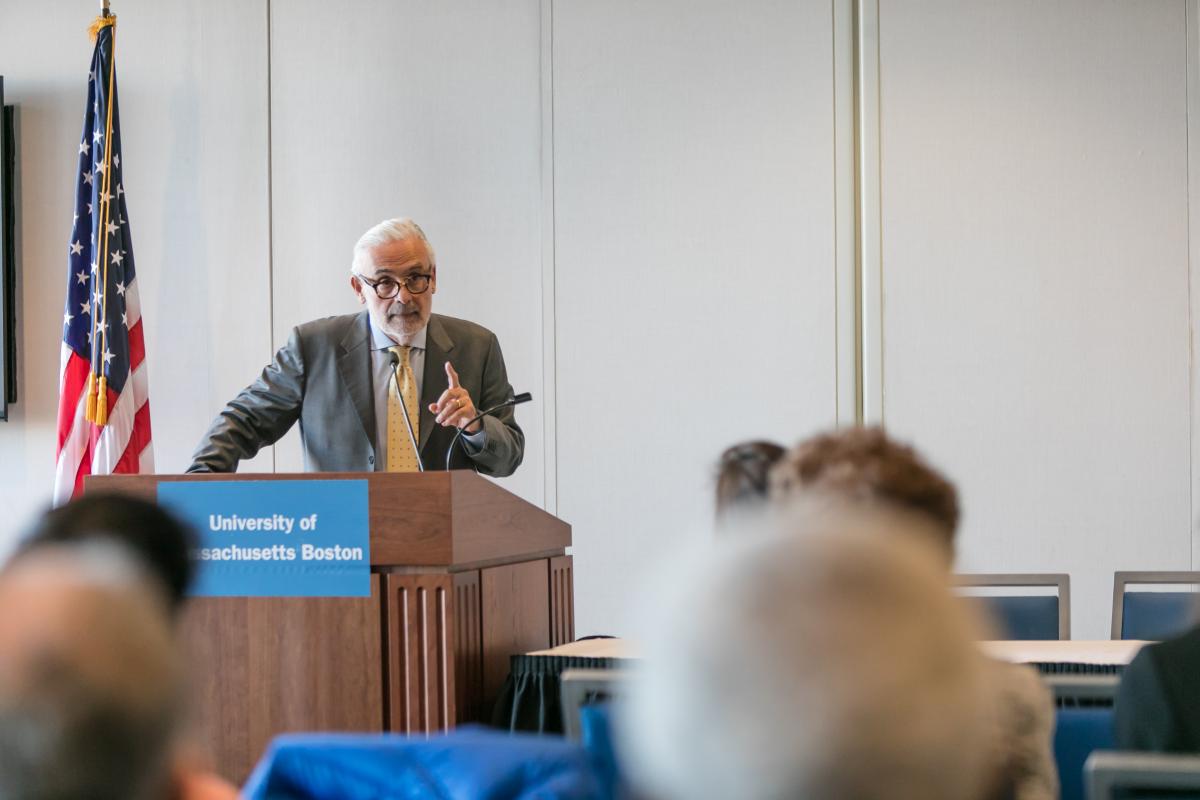 Marcelo Suarez-Orozco is the consensus choice to lead UMass Boston’s Dorchester campus into the new decade. A committee of 21 men and women (including my wife, former state Sen. Linda Dorcena Forry) considered 374 prospective candidates for the position over the last five months. In the end, instead of passing along the names of a few finalists, the committee landed on just one name: Suarez-Orozco, a 63-year-old with roots in Argentina who is currently the dean of UCLA’s Graduate School of Education & Information Services.

So far, Suarez-Orozco’s selection has not unleashed the harsh critique (quite the opposite, in fact) that greeted three finalists during the last UMass attempt to find a permanent successor to Keith Motley, who was forced to leave the chancellor’s post in 2017 amid a financial crisis that the university system blamed — unfairly, in the view of this space— too squarely on Motley and his leadership team at the Dorchester campus.

In the three years that have passed, two interim leaders have taken turns leading the campus: Barry Mills and Katherine Newman. Each was installed by UMass President Marty Meehan in hopes of giving the campus a steady hand until a permanent chancellor could be found.

Newman, in fact, was herself a candidate for the permanent post until early last week when she removed herself from contention.

What else has changed in the interim on the Dorchester campus? Plenty.

For starters, several of the major projects initiated under Motley have sprung from their construction cocoons to reveal a modern waterfront campus, including the first-ever student dorm rooms— another Motley-era breakthrough that proved elusive for earlier leaders. Most notably, another maneuver engineered on Motley’s watch— the 2010 acquisition of the Bayside Expo Center land at Columbia Point’s jugular for $18.7 million— has since been “flipped” into what could amount to $220 million-plus for the campus through a 99-year lease to Accordia.

Motley wasn’t the only person at the controls on that deal; but it’s hard to square the negative portrayal of Motley’s financial acumen with the Midas-like return on that investment. Suarez-Orozco— if installed as expected— will be fortunate to have come along at a time in which UMass is poised for an infusion of Bayside dollars that his predecessors could barely dream of.

What will he do with it? Early signs are promising, according to those who were there for his first visit to campus last Friday. He is described as a “forceful speaker” with a sharp wit and a backstory that suggests an affinity for the UMass Boston student that has long formed the identity of the Dorchester campus: young men and women many from immigrant backgrounds with limited means who are willing to work hard to advance their prospects.

Suarez-Orozco came to Los Angeles at age 17 to live with family friends, part of his mother’s plan to protect him from a menacing military junta. Such a profile — and an empathetic streak for young men and women who understand the hustle it takes to advance in a competitive city like ours— is a promising one.

Suarez-Orozco will no doubt find himself with a learning curve and nagging town-gown matters to navigate, as any new leader in this town will invariably encounter. But he should know that good will does exist here. UMass Boston and the communities that surround it have long been bonded by shared interest and common stories. We wish him well as he begins his efforts.