Boston’s population is growing and, by most estimates, is well on track to surpass 700,000 by 2025. But, even as Boston booms, our population of kids is on the decline as families either are having fewer of them or leaving the city as they grow older. What that means for the mix of students in our public school system— and for the city’s culture and identity for years to come— is profound.

A report released today by the Boston Foundation illustrates just how much the city has changed in recent years and offers new insights into the challenges this presents for policy-makers, parents, students, and educators.

Here are some of the findings that the report lays out:

• Dorchester has seen the sharpest decline in school-aged kids living here between 2000 and 2017— a 25 percent drop, or about 6,600 fewer children. Mattapan is also now home to about 1,200 fewer kids in that time span, representing a 21 percent decline. Overall, the city’s school-aged population dropped 12 percent in that period. 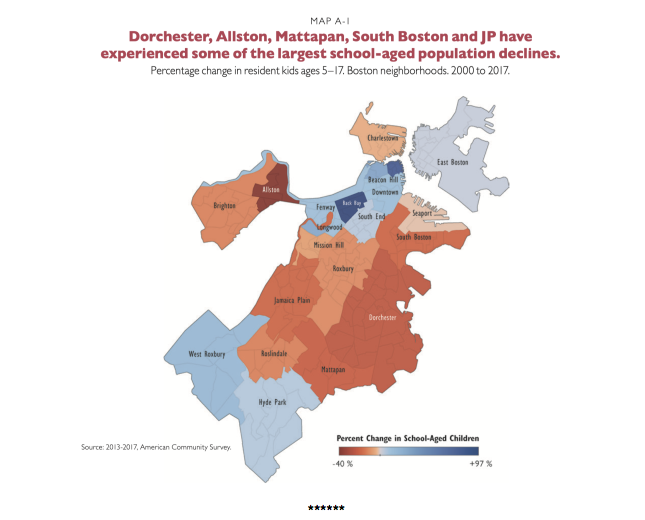 • Boston has lost roughly 8,400 black school-aged kids and 4,700 white school-aged kids since 2000; the Asian population has remained level, and there has been growth in the Latino share by about 3,700.

• Roughly half of the city’s middle and high-income children leave Boston when they reach school age. Among high-income households, there are more than twice as many high-income 0-4 year olds in the city compared to 5-9 year olds (roughly 6,300 compared to 2,700.)

• The largest decline in BPS population since 1995 has been among black students, who represented 48 percent of the BPS in 1995 and are at roughly 35 percent today. The report’s authors attribute much of that change to the fact that “Boston’s charter schools have been especially popular among [b]lack families in Boston,” making up about half of charter school enrollment in the city. Another 2,000 black students are in METCO, the report notes.

• One result of these demographic changes is that Boston’s public schools are becoming less integrated by race and income. The vast majority of all students of color— 66 percent—attended intensely segregated schools” in 2019.

• Students of color are becoming more segregated by ethnicity, too. In 2019, the report finds, Latino students made up 70 percent or more of students in 14 schools. “Overall, 42 percent of Latino students attend schools in which students of their own race form the majority— up from 11 percent in 1980.”

The report does not offer any prescription for reversing these trends. Boston is not alone, of course, in seeing declines in its school-aged population. Cities like Baltimore, New York, Philadelphia, and Washington D.C. are experiencing similar changes in their population share of 5-17 year olds. By and large, people are having fewer children.

We’ve long been a city with big disparities between the “haves and the have-nots.” This report, however, offers new evidence that the gap is growing wider. That should get the attention of everyone who cares about where we’re heading.