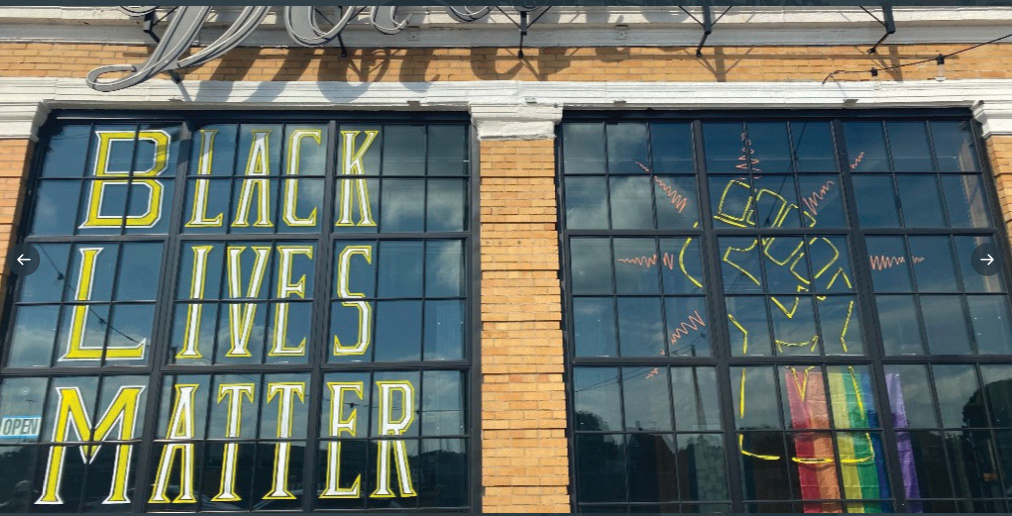 Above, the windows of Dorchester Brewing Company on Mass Ave. this week. Daniel Sheehan photo

Last week, I turned over this column space to Emerson College president Lee Pelton, a black man who has endured decades of racist behavior— both blatant and subtle in nature— from white people.

He sees himself and his family members and his friends in the dying eyes of George Floyd.

“I have no words of comfort today because they would be inauthentic,” Pelton wrote to his school community. “They would absolve so many from coming to terms with their own silent complicity in the world in which we live.”

Comfort is what we all seek in times of strife and chaos— and, yes, in the weariness of pandemic. But comfort, at this moment, is a cop-out. It must not be our collective goal, not yet. Especially in a neighborhood like ours— a mixed, multicultural one that we share.

Generations of people who climbed the stairs of your three-decker or mowed the lawn outside your Victorian likely grappled with the same issue. Many of them resolved it with their feet and moving trucks.

Whether black or white or Asian or Cape Verdean or whatever, you’ve thought the same, too, at times: What keeps us here?

Answering that question honestly might need to start with another question: What do you see in the dying eyes of George Floyd? Do you see yourself? Do you see a human being?

I see my kids and their uncles and their friends— and my own friends— in the dying eyes of George Floyd.

I am a white guy. I am also the father of black children— including two black teenage boys— and the husband of a black woman. We have raised our kids to know that they are both black and white, Irish and Haitian. American. And Dorchester, for sure.

Their blackness, though, is an essential part of their identity, and it’s a beautiful gift. But it comes with an insidious caveat: This is a nation in which black people are targeted for disparate treatment. And not just from some police officers, but from white people who are filled with fear of black people and maliciously call the police on them. Those white people weaponize law enforcement and, as we saw with the pathetic Amy Cooper incident in Central Park, lie to imperil their fellow Americans. White folks like me may not see themselves in the steely, brutal eyes of the murdering Derek Chauvin; but how about Amy Cooper?

We can emerge from this crisis, but can we be better, more together somehow? There are policy fixes that will be made — and you get a sense of that from the headlines in this week’s edition. New and different ways to recruit and hire police, to diversify, to deploy will be adopted. There will certainly be a focus on disparities in health outcomes and generational wealth for black Bostonians.

But, what are you and I going to do?

Boston’s poor reputation on race was well-earned and, yes, some of that is because of cops who’ve brutalized and even killed black citizens. But to stuff the problems that confront us now into a blue uniform and then ignore how all elements of this city have treated black Bostonians would be an injustice of another kind.

Police didn’t invent racism or the brutality that accompanies it. They are — at times— instruments of it, an extension of a society whose default position is that black people are a threat, the other, an element of society to be controlled, corralled, red-lined and, when the price is right, sent packing to the outskirts in the name of progress.

In the meantime, we’ve allowed our own Boston narrative to get narrowed into a hackneyed, stale caricature that defines us to the nation, to newcomers, and even to ourselves— if we choose to buy into it. It’s deliberately white dominated and it must be challenged at its roots.

To me, Dorchester’s great promise has always been that this is the kind of multicultural neighborhood that could be tapped to challenge that hackneyed script. This stew of people and circumstances has been on the burner here now for generations. If there’s hope for this city, and for the country, it’s got to be that the dynamic will hold strong, that authentic bonds of affection forged over decades will endure in the most trying of times. We shall see.

Bill Forry is the editor and publisher of the Dorchester Reporter.