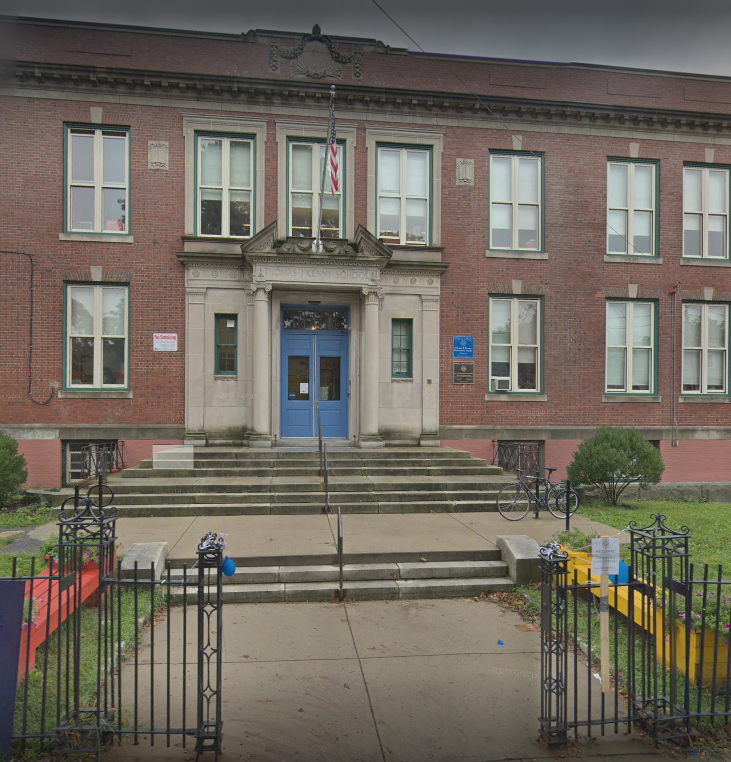 By Eve Goldberg
Special to the Reporter

Three years ago, my family took the leap many Boston families do once their children turn four –entering the Boston Public Schools (BPS) lottery for a K1 space. Although I work in education, the process was daunting with many schools to visit and websites to review—not to mention every school having a different start time, grade configuration, and program area.

During the selection process, I fell in love with the Kenny Elementary School from Adams Village after meeting the two amazing K1 teachers, the passionate principal, and warm and welcoming families. However, despite my feeling that we had found a home, I was concerned that the Kenny only went through grade five, leaving an awkward one year gap before my daughter could enter one of the middle/high schools in the city and an extra transition to hurdle. Our worries about the lack of a sixth grade meant that we ranked other area schools higher because they could offer more stability.

We ended up not getting a seat at our top choices and instead had a high number for the waiting list at the Kenny. We decided to take a risk on the Kenny. I am so glad that we did. My daughter has thrived since walking through those doors two years ago.

The school has just under 300 students, so teachers and students across the school know my daughter on a personal level. The teachers are universally dedicated, caring, and supportive. She has loved having a farmer regularly visit her science class; taekwondo lessons during afterschool; and learning words in Haitian Creole and Vietnamese from her classmates.

Despite our knowledge that chance provided us with a fabulous school where our daughter can thrive, we also know that we have tough decisions in our future. As we have gotten to know other families, we’ve seen countless families struggle with the decision of moving their sons and daughters to other schools once they enter the upper elementary school grades to avoid the need to enroll their children in another school for just one year. Watching these parents go through the wrenching decision to uproot their students to a new school, from a place which they love and where they have cultivated long term friendships, is tremendously unsettling. We regularly wonder what we will do when we are in their shoes and if we should send our younger daughter to a different school to avoid this issue. Additionally, it’s less than ideal for the teachers and students who continue at the Kenny and face the churn of new classmates.

Over the last two years, Kenny families have held out hope that eventually the district would allow the school to grow and add a sixth grade. We weighed in through the Build BPS community engagement process and held out hope that the school would be recognized. However, on May 21, when BPS Interim Superintendent Laura Perille announced the fortunate elementary schools that would be allowed to add a sixth grade, the Kenny was not one of them. We, like other Kenny families, were baffled and crushed to not be included. In a system losing students, struggling to provide high quality seats to all students, and resegregating, the Kenny is a beacon of hope.

Over the last three years, the Kenny has gone from a Tier Three to a Tier One school. In April of 2019, Mayor Marty Walsh referred to the Kenny’s improvement in an interview with the Boston Herald, mentioning the “outstanding principal” and “outstanding teachers” at the school. In an era of increasing school segregation, 35.8 percent of the students at the Kenny are African American, 14.9 percent are Asian, 21.3 percent are Hispanic, and 22.3 percent are White. These statistics are some measures of success that are visible to those outside the community; but as a Kenny parent, I see evidence of the school’s success every day. I believe that the Kenny is just the kind of school the district would want to support and help thrive.

We are asking that the district and Build BPS reconsider their decision – the Kenny is exactly the school that should be allowed to add a sixth grade. Supporting the school to reach its full potential is not only a good decision for my daughter, but it’s also the case for all Kenny students, and ultimately the entire community. We hope the Dorchester community can come together and help us make the Kenny whole.

Eve Goldberg is a member of the Kenny Elementary School Parent Council and submitted this commentary on behalf of the council.