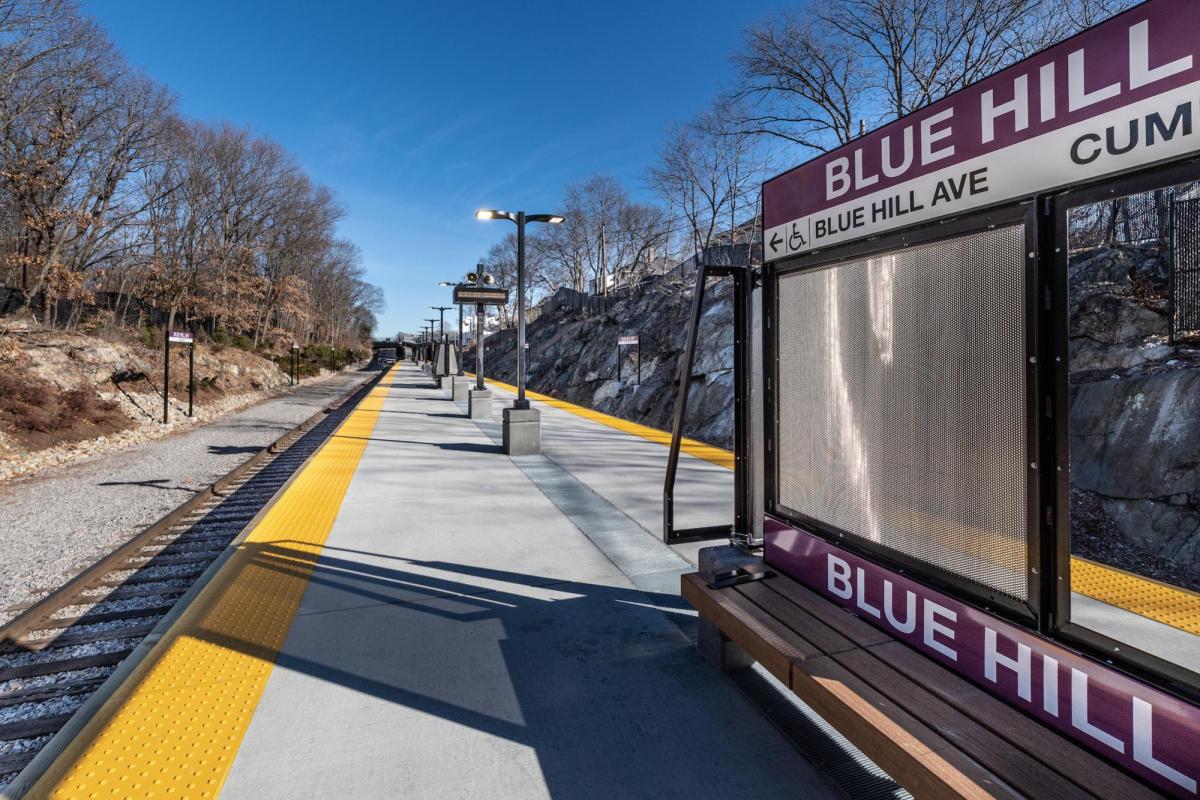 Editor's note: MBTA officials confirm that the new Blue Hill Avenue station on the Fairmount Line will open for service on Mon., Feb. 25.

Between likely fare hikes, the usual wintertime delays and Tuesday’s extra stressful experience of Patriots fans from across the region clogging up the system, the MBTA is once again dominating headlines in the Reporter and elsewhere. It’s typically not the happiest of sentiments motivating the coverage.

There’s a bright spot on the horizon, however, and this time it’s in Mattapan. The MBTA has set Feb. 25 as the date of the official opening of Blue Hill Avenue station the newest and, likely, the last new stop on the Fairmount Line. (An official dedication ceremony is tentatively set for March 6.)

The Blue Hill Avenue station is ready for its close-up. The 800-foot-long platform is outfitted with messaging signage, benches, and shelters for those who want a refuge from the elements. It has been handsomely landscaped.

The station will open up an attractive new commuting option for people who live near Mattapan Square along the Blue Hill and Cummins Highway corridors. This is a corner of the city that has been clamoring for better mass transit options. New data just released by the Boston Planning & Development Agency underscore the need. According to the agency’s analysis of the new census data, Mattapan’s workforce (which numbers just over 12,000 people over the age of 16) is heavily reliant on personal vehicles.

For decades, a much faster way into the city at South Station has hurtled through this heavily populated section of Mattapan. But neighborhood people could only watch as their neighbors from Readville, Hyde Park, and points south zoomed through. That was — and is— an injustice. The current trip from Mattapan to South Station via bus is 40 to 45 minutes, according to an MBTA calculation made in 2015. That’s a generous estimate. The estimated ride into town from the new station will be 20 minutes.

The battle to build this station was arduous. The Conservation Law Foundation had to bring a lawsuit against the state for failing to comply with an agreement to build new stations in Dorchester and Mattapan— a result of mitigation negotiated for the Big Dig. The CLF won that fight. Even then, however, there was resistance from some Mattapan residents who didn’t want it in their neighborhood, fearing the impacts of a new station so close to their homes.

In the end, the greater good won out. Political will was important here. (Full disclosure: My wife, a former state rep and then a state senator, Linda Dorcena Forry, was a key player in pushing for the station to be built.)

Governor Deval Patrick and his appointees were instrumental, too, in allocating the $17 million needed to get it built. The current Baker administration has seen it through to completion.

The station has also unlocked new economic development activity. The long-abandoned Ford car dealership that hulks near the station will soon be transformed into Cote Village, a mixed-income residential complex that will be a $28 million investment, the largest of its kind to date in Mattapan.

The push for equity along the Fairmount corridor is one that has been literally decades in the making. There’s much more to do, but the opening of Blue Hill Avenue station is a milestone moment for the MBTA and the community.