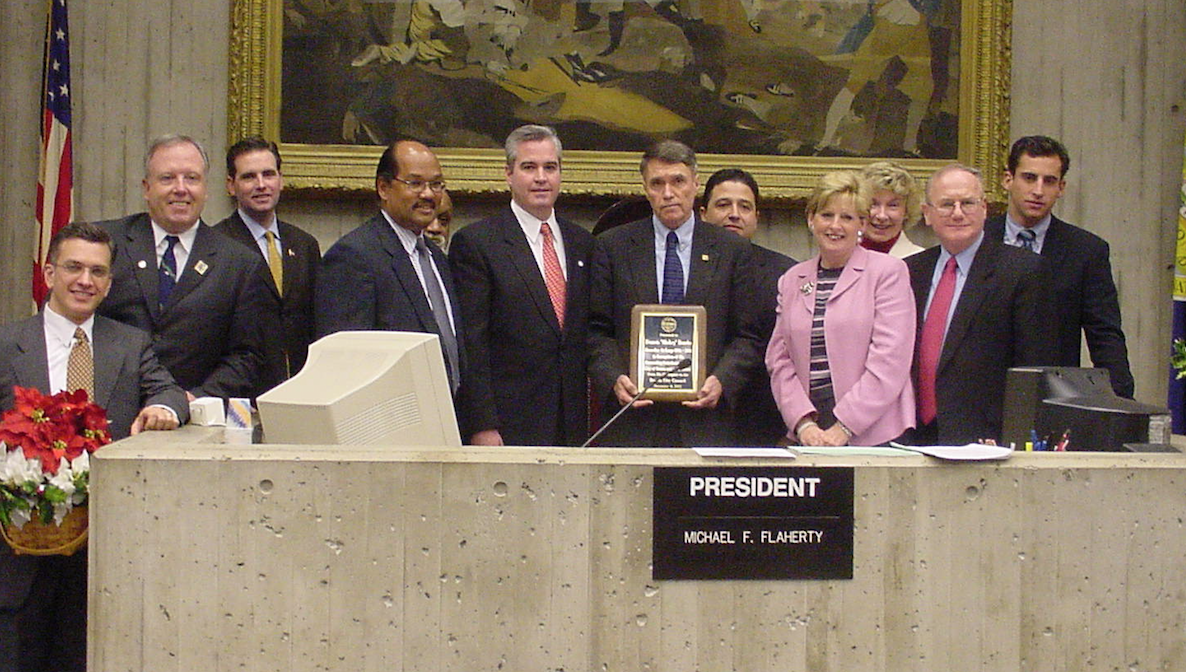 City Councillor Francis "Mickey" Roache was presented with an award from his colleagues on the council in 1999. Reporter file photo

Francis “Mickey” Roache, a longtime Boston police officer who was commissioner of the department in the late 1980s and early 1990s and later sat on the City Council and served as the Suffolk County Registrar of Deeds, died early this week at age 82. The remembrance that follows was written by his longtime aide, Charles Burke.

As we approach Christmas week and look forward to spending time with our families, please keep the family of Francis “Mickey” Roache in your prayers. This son of Boston, who passed away on Monday had a profound impact on the city of Boston.

A graduate of South Boston High School, Class of 1964, he served in the Marines before joining the Boston Police Department in 1968.

In 1978, he was designated to head up the newly formed Community Disorders Unit. He was promoted to acting lieutenant in 1983, and named police commissioner by Mayor Raymond L. Flynn in 1985. He served in that role until 1993 when he made an unsuccessful run for mayor.

The people of Boston showed their appreciation for Roache’s service by electing him to the Boston City Council two years later, as he earned more votes than all others seeking the council.  He repeated that feat three more times before he was elected Suffolk County Registrar of Deeds, a post he held until 2015.

I had the honor of working with Mickey. First, at the Boston Police Department as the deputy director of Administrative Services, and later as his chief of staff at the Boston City Council.

Mickey and I were close for a few years.  He once told me that he considered himself “a late bloomer.” I will always appreciate his work ethic and his smile.

He was not someone who wanted the spotlight, attention, or even the credit. He just wanted to serve. As commissioner, he served our city during some difficult years.  He told me,” I never imagined being police commissioner or running for office, but I was honored to have done both.”

Being the commissioner is a difficult job. Only those who have actually sat in that chair can truly understand the toll it takes on them and their families.  Running for citywide public office is grueling in its own right, but Mickey did it with ease because he knew the city and its people so well.
I admired Roache in the way he was a visible and approachable public figure.  He had a great heart and was a good listener. When tragedy struck and news had to be delivered to a family that their child would not be coming home, he was a compassionate messenger who seemed at that point to have lost a piece of himself as well with the death of a young one happening on his watch.

As time moves on, we sometimes overlook the truth of our history. The 1970s were a tough period for the city of Boston, and the images that portrayed us around the world created scars for Boston that remain in place today.

Mickey Roache and Mayor Ray Flynn dedicated themselves to healing those wounds throughout the 1980’s.  They were approachable and extended helping hands to all who needed it.   They changed the direction of the city by bringing government to the people through the inception of community policing.

While the 1980’s were not all that long ago, the work of devoted public servants like Commissioner Roache, Mayor Flynn and so many others is either unknown or forgotten by many Bostonians. They played a significant role in improving race relations across the city and we still feel the impacts of their work today.

When Mickey sought a seat on the City Council, his slogan was from the TV show “Friends” – “I’ll be there for you.”

Well, Mickey, you were there for us.  A leader, a listener, and a friend.  You made Boston a better place, and we thank you.