There’s one thing everyone can expect during the Tet celebrations this weekend in Dorchester and beyond, and that’s a lion sighting – specifically the traditional Vietnamese lion dancers who have become the centerpiece of annual festivities saluting the Lunar New Year within the Chinese custom, but with the Vietnamese version known as Tet that highlights the culture at large – its food, music, arts, dance, and religious life.

But if you think that lion dancers just don their costumes and prance around randomly, think again. The traditional performances are carefully choreographed, with every move carrying meaningful symbolism.

On any given Friday night, that choreography is planned and played out in the old St. Gregory’s gym in Lower Mills, where Johnny Ho and other volunteers at the Vovinam Quang Trung Boston martial arts center hold an extra one-hour class to teach the traditional art to students of all ages who wish to learn the lion dances.

Last Friday, the entire class was preparing for Tet, which occurs this Sunday. There are many celebrations planned locally – within religious communities, the Boston Little Saigon network, and the numerous private parties hosted by many of the neighborhood’s Vietnamese families. Most every gathering features lion dances, and Ho’s group is usually front and center.

“Right now, the lion dance is something you just have to have at the new year,” said Ho. “It kicks off the whole event and people enjoy it, and they want it. They believe it brings good luck and prosperity and kicks off the celebration and the new year in a positive way.”

The classes are an offshoot of the martial arts training center, which practices the Vovinam style founded by a grandmaster named Nguyen Loc in 1938, a time of social upheaval in French-controlled Vietnam. The practice was formed to strengthen the mind and the body for fighting the European colonizers. 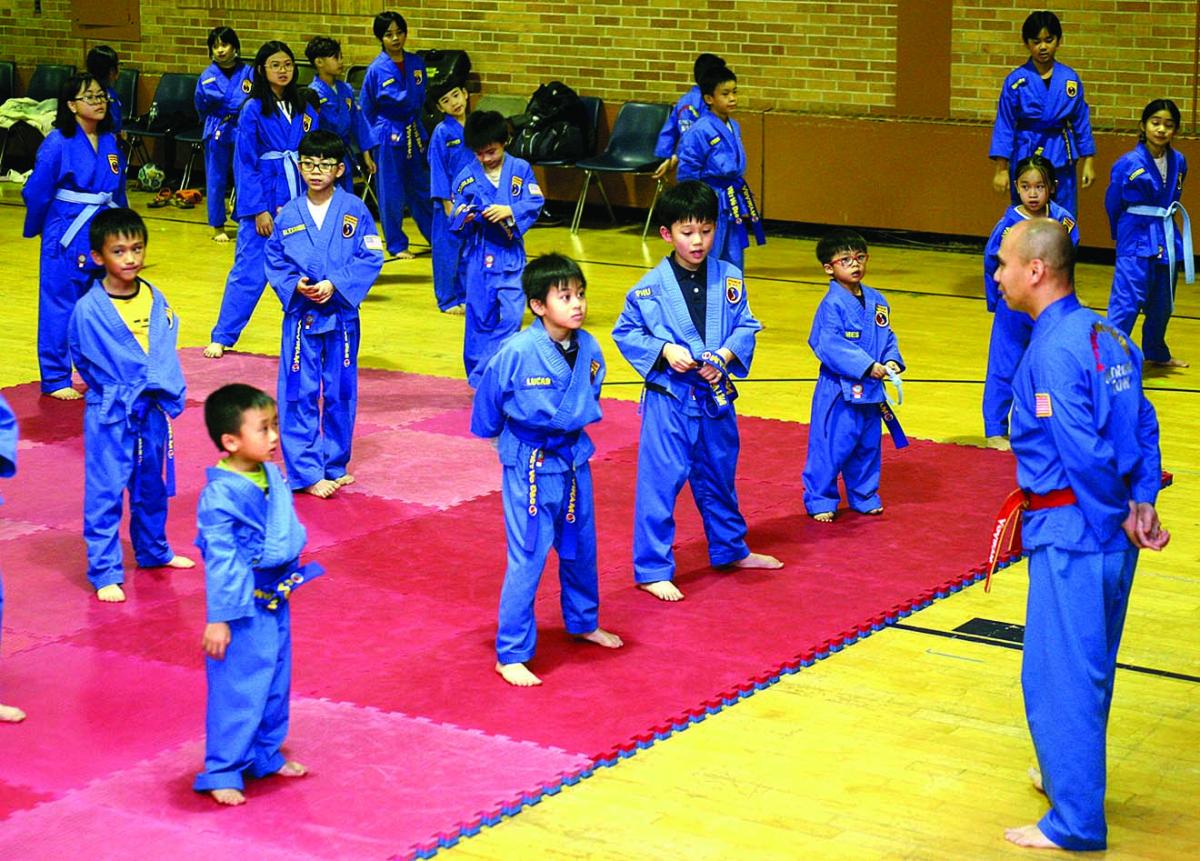 Master Johnny Ho leads the Vovinam Quang Trung Boston training academy in St. Gregory’s Gym, where about 100 students and families gather twice a week. The center is also where students take up the traditional lion dances.

Since then, Vovinam has been adopted in hundreds of countries around the globe and is a strong component of Vietnamese life in Dorchester – particularly in the Quang Trung schools.

Ho took up Vovinam and lion dancing in 1993 under the tutelage of his math teacher at Brighton High School, Nguyen Dang, a grandmaster himself. Dang and his students first started meeting at the-then Dorchester House in 1995, and, in 2001, they moved to their current home at St. Gregory’s gym. They also had a location starting in 2009 at VietAid in Fields Corner, but 11 years later, the pandemic intervened. When the plague abated, they re-opened the St. Gregory’s location and closed the one in Fields Corner.

While maintaining other schools in Randolph, Worcester, and Somerville, they enroll about 100 students mostly ages 5 to 15, with three masters and 10 instructors who volunteer their time in Lower Mills.

All tuition payments are invested in equipment, and any proceeds left over are donated to the church, Ho said. This year, they plan to donate about $4,500 to St. Gregory’s.

The martial arts demonstrations from Quang Trung are very popular at the Dorchester Day Parade and other Dorchester events, where the style’s well-known “scissor kick” delights onlookers. But it’s the offshoot lion dance movements – which are closely aligned to martial arts training – that have become their calling card.

“It’s really cool, and the lions are really nice costumes, and you can get money if you’re good at it,” said teenager Ryan Nguyen, who was practicing last Friday with a partner on how to make the lion stand up to full height. “I also like the movement and the fact that it all goes together with the music. It is completely tiring, though. It’s not easy.”

The movements are as old as the culture, Ho said, and in addition to Tet celebrations, they also frequently perform for new businesses or organizations – again for good luck and prosperity. 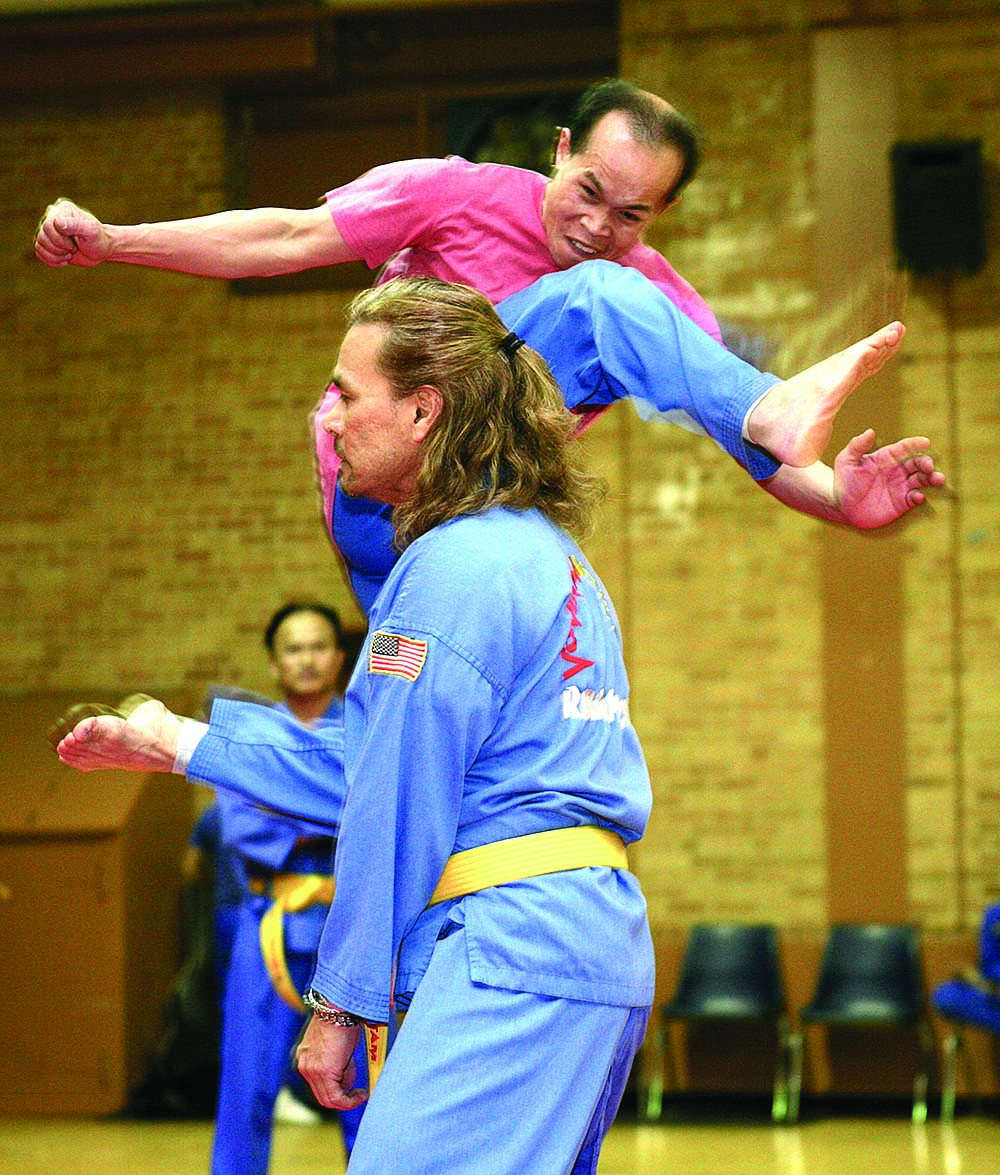 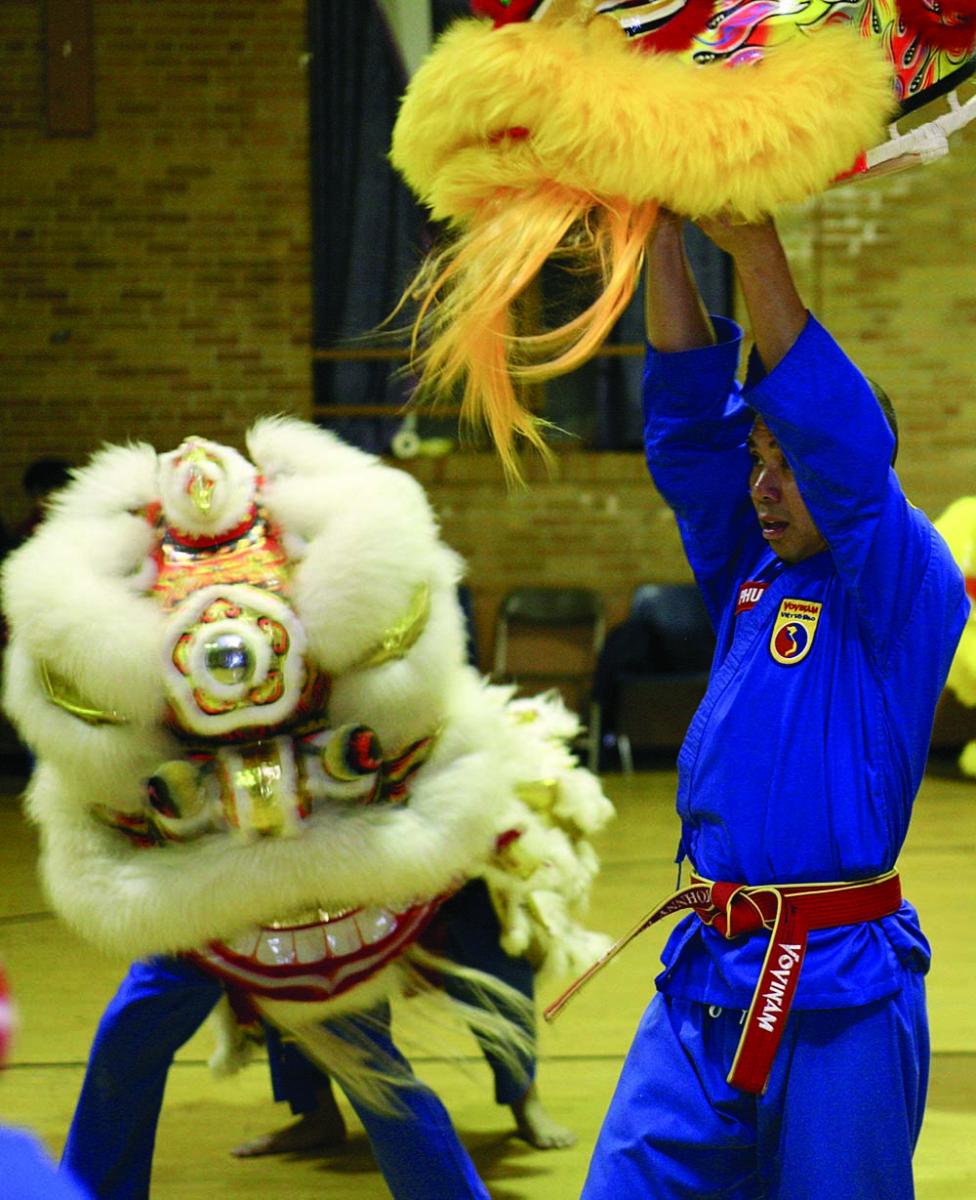 The lion dance is based on the “bows,” which are the amounts of times the lions go forward and backward. In Vietnam, the key number is nine, it’s considered lucky. In China, they will ask for seven bows, as that is the lucky number there. Meanwhile, in Boston, Ho said, they mostly just do three bows, except on the new year when they will do the full nine-bow dance. Each dance is also done using the symbolic green leaf lettuce and a cornucopia of fruits that are “fed” to the lions.

“A lot of businesses will ask us to do the lion dance when they open because they believe it scares away the devil or the bad spirits,” said Ho. “Other people may not care, and they just want good luck. We don’t use the black lion, which maybe is okay in China, but Vietnamese, we don’t use the black lion. For the Vietnamese, black represents funerals and sadness. That’s why we use the yellow and red colors. They are colors that are lucky. The green leaf will represent money and prosperity. The fruit symbolizes love; when you have love that means you will also have prosperity.”

This week, the martial arts school and the lion dancers are practicing for the school’s Tet celebration welcoming in the Year of the Cat on Saturday – and for being the centerpiece in celebrations all over Fields Corner and Dorchester – all bent on welcoming in a healthy and happy new year.
“It’s all superstition, but it’s been there a long time,” said Ho.