An image from marketing materials promoting the potential sale of 777 Morrissey Blvd. shows the site in question. Image courtesy Newmark

Lambert’s Rainbow Market — and the adjacent Puritan Plaza shopping center on Morrissey Boulevard— is on the market.

The 3.63 acre property at 777 Morrissey Blvd. is being offered for sale along with another Lambert’s location in Westwood, MA, according to a listing from the commercial real estate company Newmark, which says it has been retained two sell the two properties. The property is currently owned by a trust controlled by the Lambert family.

“The properties are being offered without a formal asking price. The seller will consider offers on wither property individually or the two properties combined,” according to the listing.

Lambert’s — which has been doing business at the high-profile Morrissey location for 65 years— is a family-owned store that specializes in freshly-made to-go meals, deli meats, produce and specialty items and does a brisk daily trade, especially during lunchtime. Also included in the offering are buildings that house 12 tenants, including a pizzeria, ice cream shop, fitness center, a clothing store, a gas station and a Citizens Bank branch.

The listing notes that the shopping center is “fully-leased,” including Lambert’s, which “recently signed [a] 10-year triple-net anchor” lease at both the Dorchester and Westwood locations. The Westwood shopping center is located on Providence Highway.

On Thursday, Lambert's co-owner Danny Lambert said that the sale was necessitated by "legal matters" that he could not elaborate on.

However, he said that both grocery stores in Dorchester and Westwood will stay open for the next decade whether or not the properties change hands.

"Before we even put this up for sale, we have a ten year lease. So, we're here for ten more years at least. If it sells, whoever buys it- they have to stick with those leases."

When asked if the Dorchester store would remain open beyond that ten-year time frame, Lambert said he hoped it would.

"That would be the goal, absolutely," Lambert said. 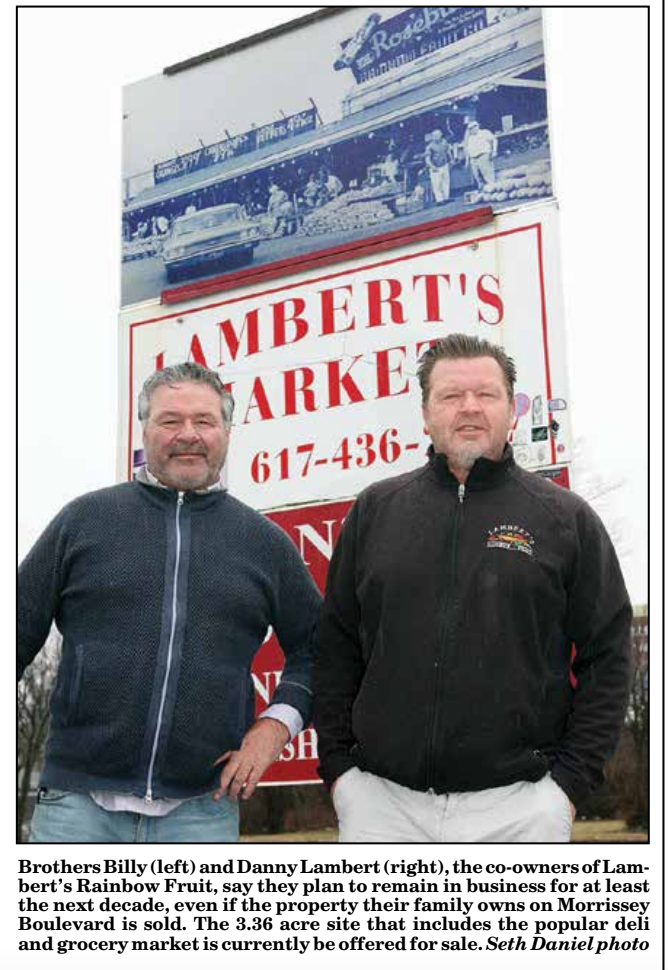 The move to sell the land comes as a flurry of other development projects unfold in close proximity.

The “fast-growing development district” along the Morrissey corridor is emphasized in Newmark’s marketing materials.

Dorchester Bay City has not yet been permitted, but is far along in the Boston Planning and Development Agency’s large project review process. Other nearby projects— including the former Boston Globe headquarters, which has been transformed into a life science office center— are also highlighted in the offering.