While everyone else is bringing in the new for 2023, it’s the old that leaders in Codman Square hope might bring revival to the area this year. Fueled by funds from the Community Preservation Act (CPA), the Henderson Foundation, and the Amelia Peabody Charitable Fund, significant revamps are set this year for The Second Church, the Great Hall, and the Codman Burial Ground.

“You have these gems in this area and nobody knows about them,” said Rev. Dr. Victor Price of Second Church. “Sometimes we undervalue ourselves and de-value ourselves because we don’t know. It is a de-valuing of the community if you don’t know the significance of what you have. Dorchester is known for its violence, but not for its gems.”

Second Church was formed in 1804 and is the oldest wooden church structure in Boston that still hosts an active congregation. Rev. Price leads that Nazarene church community, but he also uses the space as a church incubator for three other smaller churches and a number of non-profit organizations.

The church has seen significant interior work done over the last 25 years, according to historic preservation consultant Jeff Gonyeau, a Dorchester resident. This year, the focus will be on restoring the most visible part of the church – its steeple, down to the clock faces. Scaffolding has been assembled and steeplejacks will be working through the winter, with a completion date in the summer for the nearly $1 million project.

Gonyeau said one notable achievement for the steeple work was addressing the cell phone equipment protruding from the historic church’s tower. “Over time the numbers of antennae proliferated to the point it became a real eyesore up there,” he said. “Part of that was when they upgraded, old equipment wasn’t removed…The groundbreaking thing about this project is we built a great relationship with T-Mobile and AT&T and got them to remove all the old equipment from the steeple.”

When the new steeple is unveiled, new equipment will have been installed, but it won’t be visible from the street. “It was CPA funds that really came to the rescue here,” Gonyeau said. “There’s a lot of pent-up demand for historic preservation work like this because there was no source of funding ever before.”

Key elements that will need work in the future are the four clock faces, which cannot be addressed in the current phase. The clock facing Washington Street is important because it is made of glass and was given to the church as a gift from Walter Baker & Company, which was for more than two centuries headquartered in Lower Mills. Lumped in with the restoration of the clock faces is a desire by Price and Gonyeau to get the historic (circa 1816) Paul Revere & Sons bell back in working order. While the bell works, the structure around it isn’t stable.

“The bell ringing is something we are hoping to get to the point where more technology will be available to have the antique bell ring on certain occasions,” said Price. “It hasn’t been done for a long time and we are hoping to make it functional again…Having it ring on occasions will help the community realize its value and that it is there.”

Second Church is also set to embark on a major rehabilitation of the Codman Burial Ground on Norfolk Street and the addition of a new community space at the front of the property. The Church received $350,000 for the long-planned project early last year and expects to begin construction this spring.

“It’s fascinating because there is a demand in the neighborhood to learn more about the Burial Ground with all the history that’s buried there and that we’ve unearthed,” said the reverend. “The social space up front is going to be very incredible to have for musical services and presentations that enrich the space. It’s also going to make it educational and make it a stop in Dorchester that preserves the history of the community.” 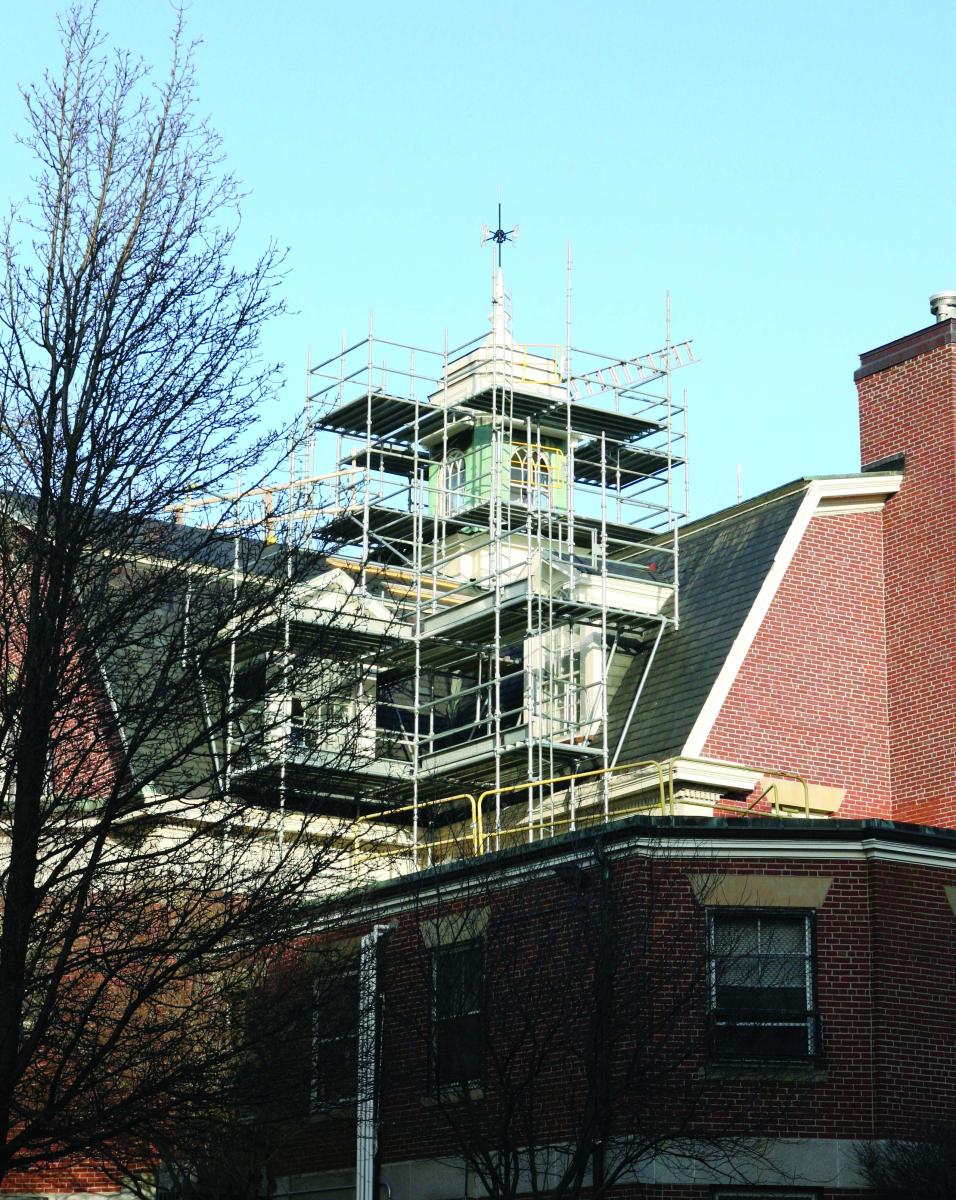 Scaffolding around the cupola on the Great Hall still conceals the work that will result in fine architectural details being restored to the building.
Seth Daniel photo

In addition to the restoring the historic graveyard, the plan by Goode Landscape Design includes a new playground, amphitheatre, and contemplative space for those lost to community violence.

Another piece to the three-part restoration project is nearly $1 million in work that is now being done to the outside of the Great Hall. Owned by the Codman Square Health Center (CSHC), the landmark building needed significant roof repairs. When the team, which includes Gonyeau, began planning for the work, they found the original 1904 blueprints and were shocked to find much more architectural detail than anyone around today knew about.

The building was originally the Codman Square branch of the Boston Public Library but became vacant in 1978 when the library moved to its current location at the corner of Welles Avenue and Washington Street. The CSHC took over the space and used it as its first location. In recent years, it has been in demand as a venue for community events.

While the new slate roof has been installed, it will be the work on the cupola that is expected to turn heads. “We are excited that some long-gone architectural features are being restored, especially on the cupola, which everyone who passes through Codman Square will be able to see and enjoy,” said Tony Stankiewicz, CSHC’s chief of staff. “The cupola is literally the ‘icing on the cake’ on this building, and we think that people will be surprised and delighted when they see how much of its features were previously missing, and to see them restored.”

Gonyeau estimates that all the original architecture hasn’t been in place for at least 40 years, including the weathervane, eight decorative columns and urns, and an iconic balustrade over the entry.

Said Stankiewicz: “We love the fact that these two projects are happening at the same time and are completing critical preservation work on two of the most prominent and historic buildings in the Square. It demonstrates the value that CPA funds can bring to a neighborhood…. Along with other CPA projects, including Global Ministries just a few blocks to the south…and Greenwood Memorial Church several blocks to the north, these projects are making a significant investment in preserving Dorchester’s historic resources.”

Other works in the square include a $200,000 project for roofing and drainage repairs, and the construction of a new accessibility entrance to the Global Ministries Christian Church, an 1889 shingle-style building on the corner of Welles Avenue and Washington Street, and ongoing restoration at the Greenwood Memorial United Methodist Church near Mother’s Rest Park on Washington Street.