Artist Melissa Mandel has been working since April at the Franklin Field Development to create a youth-led mural art project. Seth Daniel photos

More than three stories of an empty brick wall in the Franklin Field Development have taken on the look of a colorful tree this summer as artist Melissa Mandel wraps up a long-awaited mural that speaks to the desire of young people to build community in the area.

The artwork features an African Baobab tree – known as the “Tree of Life” – in a multi-colored array of encouraging language on the side of one of the buildings along Stratton Street – with a straight on view of the large mural from Harambee Park.

While the work is formally part of the Joy Agenda championed last summer by former acting mayor Kim Janey, it has been discussed by people in Franklin Field as far back as 2014 when the Youth Lead the Change program started up.

Mandel was one of 10 artists commissioned over the past year to create murals costing more than $1 million as part of Mayor Michelle Wu’s Transformative Public Art Program, which was part of the Joy Agenda. 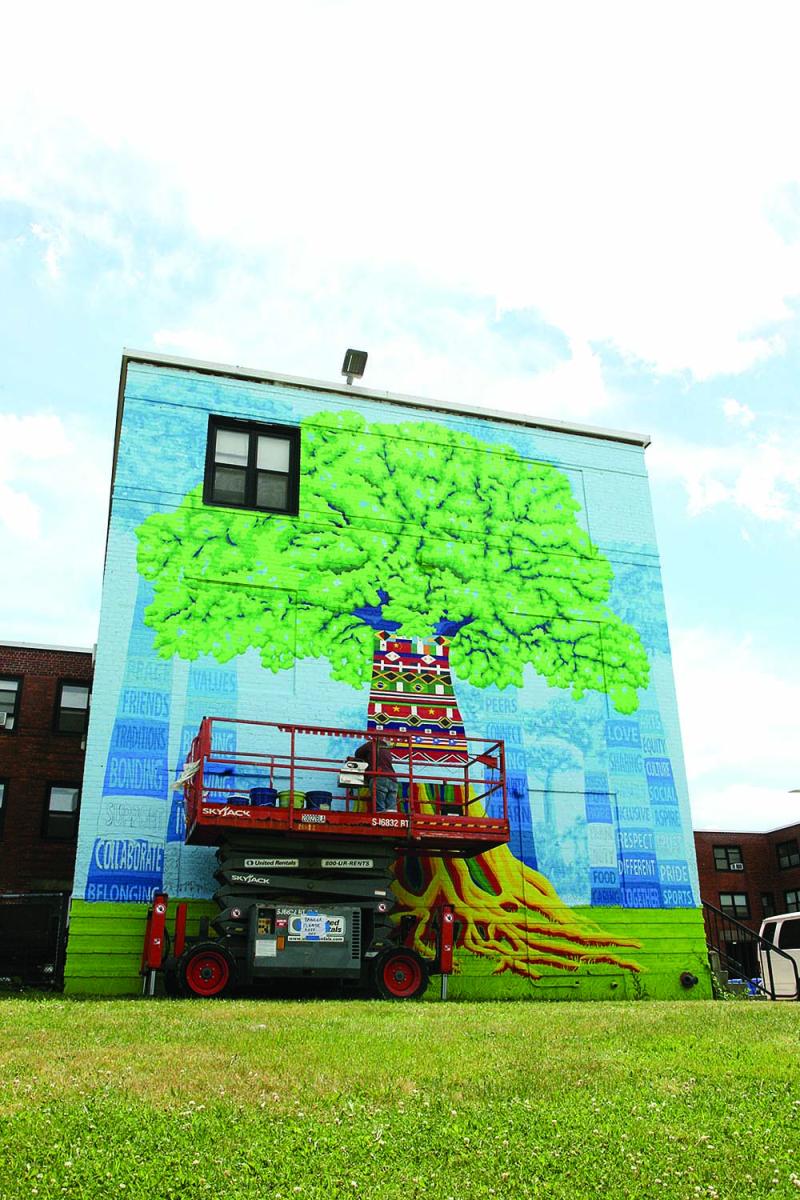 The full mural stands three-stories tall and depicts an African Baobab tree with numerous flags of where people in Franklin Field come from, and words to reinforce the unity the young people living there desire.

“The process was entirely youth-centered and community-driven and included fruitful discussions around what community means to them and what they would like to see and feel when experiencing a mural at that site,” said Karin Goodfellow, the city’s director of public art.

“We’re thrilled to be able to bring this mural to the Dorchester neighborhood and look forward to seeing the response it gets from community members.”

Mandel said she met with young people before embarking on her work, and even though few knew about the original idea from 2014, they were interested in sending a similar message about breaking up the divisions that exist.

“They wanted something hopeful, inspiring and beautiful,” she said. “There is a sense of division in the community, they said, and so they wanted the mural to express what a great and beautiful community could be at its greatest and when functioning as a unit.

“They wanted it to express what it’s like to be in a community where so many people are coming together from so many backgrounds – living together and supporting one another.”

Mandel started work in April, cleaning the side of the building by hand, and then priming it with paint later that month and in early May. To get the form correct, she worked at night and projected the image of the Baobab tree and the other aspects on the side of the wall.

Then, tracing the rough image in Sharpie, she started painting the mural the second week in May. She is on track to be done by next Tuesday.

Working through the spring has really brought her additional inspiration, Mandel said. While painting, she has enjoyed seeing the diverse community from so many backgrounds come together, to share food and play music. Beyond that, she has experienced parades and festivals happening around her while she paints.

“Being out here creating while the parades and festivals are going on has been so energizing,” she said. “I’m painting and creating the mood around me…The community there in the background is really the feeling that the young people here told me they wanted expressed.”

Mandel started her art career studio painting with oils, mostly still life and nature scenes. She gave mural painting a try while living in Philadelphia, and soon was working for a mural company there.

Following a bout with cancer, she moved to Massachusetts during the pandemic to be protected from crowds due to her immunocompromised status.

Soon enough, she saw a call to artists from Boston for the Transformative Public Art Program. After being accepted into the program, the young people who requested the mural picked her to complete their vision.

“The kids that come by are so excited and want to know how I do this and where I learned to paint like this,” she said. “It’s been a pretty beautiful experience. I’ve been so welcomed here, and it’s been touching.”

The mural is expected to last at least 10 years, and she said she hopes for the next decade it can send the message of unity in the Franklin Field community that young people told her they wanted expressed.