Skip to main content
Samuele Petruccelli, Special to the Reporter

A plaque warns of the potential harm caused by dumping into storm drains. Image via Samuele Petruccelli.

If you’re thinking of pouring cooking grease or car oil down a storm drain on your street, you might find a warning that should give you pause.

On the sidewalk adjacent to many storm drains across Boston lies a metal alloy plaque that carries the notice “Don’t Dump,” along with names of the specific bodies of water that the drainpipes lead to. The design, and its designer, are both distinctly Dorchester.

Some 30 years ago, Elisa Speranza, who then lived in Dorchester and was a project manager at the Boston Water and Sewer Commission (BWSC), saw that other cities had installed cautionary notices telling residents not to drain their hazardous waste into the street. Wanting to do the same for Boston, she spearheaded designing the signs that still mark the city’s storm drains today.

“We decided to make it a community involvement type of activity to help raise awareness to where the drainage went,” Speranza said. “And also, we just wanted to raise the general level of awareness of people and their connection to the rivers and to the harbor.”

Beginning in the summer of 1991, Speranza coordinated her community in a volunteer activity to stencil “No Dumping” signage, advertising in community newspapers, and calling on neighborhood associations.

“It was a very grassroots effort,” said Speranza, who has spent 35 years in water-related businesses. “We provided the stencils, and we provided the paint and the instructions of how to do it, and then we just sent them on their way.” 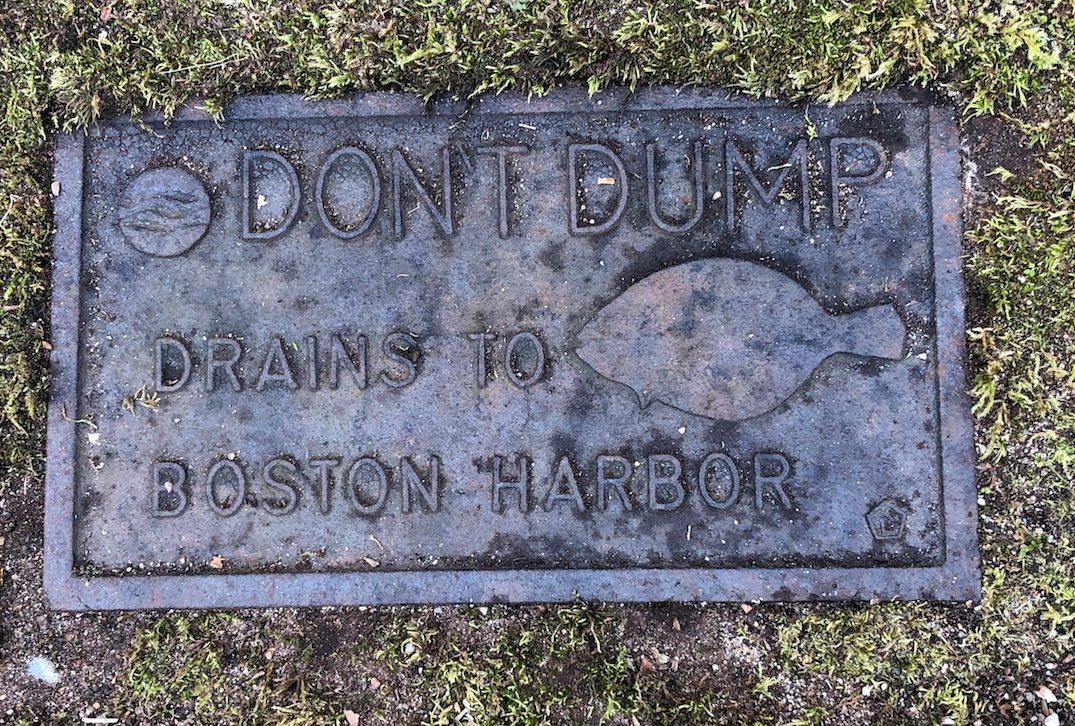 Those with an attention to detail and some knowledge of Boston’s marine wildlife will notice the choice of the fish species in the design is no accident.

“We had seen the design in other cities and usually it was a generic fish,” Speranza said. “But we wanted it to be a little bit more local, and the flounder was the most well-known and charismatic fish in Boston Harbor.”

Flounders had been crucial to tracking the city’s water quality, Speranza said. The fish could be found with deformities and tumors in their livers, indicative of the polluted water that infected the waterways around Boston. Other plaques feature an Alewife, a fish common to Massachusetts waters.

The clarity of the painted signs last but a few years, mainly due to snowfall and street sweeping, she said. It was after she left the agency that BWSC began installing metal alloy plaques with her design. New ones are installed whenever the sidewalk is torn up from construction.

Originally from Lynn, Speranza lived in Dorchester for eight years and now resides in New Orleans, where she has a consulting practice and plans to publish a book, “The Italian Prisoner,” in April.

“You go through your career, and you’re involved in all kinds of projects, and to have something like that with such staying power and to be so universally recognized is really gratifying,” the 61-year-old Speranza said. “Especially to know that they’re still doing it.”

In addition to routine new installations of the plaque, BWSC engages the city’s youth in storm drain-marking activities.

“A lot of people don’t realize that the water that goes into those catch basins goes to our waterways,” said Adriana Cillo, educational programs coordinator at BWSC. “They think it goes someplace to be cleaned and then it’s let go. Well, that’s not the case.”

Cillo works with groups of children aged eight and up to teach them about the negative impacts of improperly disposed household waste. She said the kids often pass along what they learn to their parents.

“You know, you created a general here,” Cillo said a mother told her. “She looks at me when I cook to see where I throw the oil and the grease.”

Speranza said labeling storm drains is a practice that both educates kids and rallies the community. “Generations have come and gone since we first did that project,” she said. “To me, it’s a small effort that has a lot of ripple effects and it’s very gratifying to see people recognizing that.”

The plaques can serve other purposes, too. Cheryl Breen, of West Yarmouth, was attending an annual Boston Harbor Association auction fundraiser when she saw three of them going up for bids. She made winning offers, and gave the plaques new lives as stepping stones in her garden.

“I love it because it’s gonna last forever,” Breen said. “I like the fact that it says where the waste is going and then the little fish design.”

“What I see in the story is how a middle manager starting her career, makes a decision like this, and how much it impacts the greater public,” said Jeannie Doherty, a friend of Speranza and a Dorchester native.

“So much about what she did as a public employee while she was here in Boston has had so much effect on peoples’ day-to-day life. But her legacy is this plaque, which is everywhere,” she said, adding, “So, when you talk about plaques and things that are embedded in our sidewalks and our streets, ‘Don’t Dump in the Harbor’ signs are one of a few. They are absolutely part of the fabric of the city and its neighborhoods.”