As temperatures soared on Thursday, Josiah King and Noah Francois cooled off in the sprinkler set up at the Gallivan Community Center in Mattapan. Seth Daniel photo

The temperature gauge was at nearly 100 degrees today in Dorchester and Mattapan, but the mood at three neighborhood cooling centers was cool, calm and collected.

Whether it was sitting calmly and doing word searches in the air conditioning, playing Japanese drums at the Grove Hall Senior Center, engaging with other teens in a water balloon fight at the Holland Community Center, or best of all, blasting down a water slide set up for the heat emergency at Gallivan Community Center, residents of all ages were looking to cool off and have fun.

There are 16 official cooling centers citywide, but in Dorchester and Mattapan there are three designated locations open to the public during a heat emergency. They are the Grove Hall Senior Center, the Holland Community Center and the Gallivan Community Center.

Mayor Wu on Wednesday declared the second heat emergency of the summer, stretching from Aug. 4 to 7. That triggered the cooling centers – which are all connected to BCYF Community Centers - to open extra hours during the weekday and also on Saturday and Sunday.

“We’re working quickly to make sure all of our Boston residents and families are protected during this week’s extremely hot weather,” said Mayor Wu. “I urge everyone to stay cool and safe, and check on your neighbors during the week. I’m thankful for the many City employees who are preparing for this emergency and will be responding to calls for service throughout our neighborhoods.”

Thursday was likely the hottest day of the heat wave, and all ages could be found at the cooling centers trying to beat the heat.

Pomales said they are typically closed on Saturday and Sundays, but this weekend they will be able to stay open to serve the seniors and any member of the public that needs to come in and cool off.

“When [the mayor] declares a heat emergency and opens the cooling center, that really helps us because it allows our seniors to be able to come out on the weekend and cool off too,” she said.

Janetha Busby said she loves the senior center in any weather, but appreciated being able to come cool down and play Japanese drums. 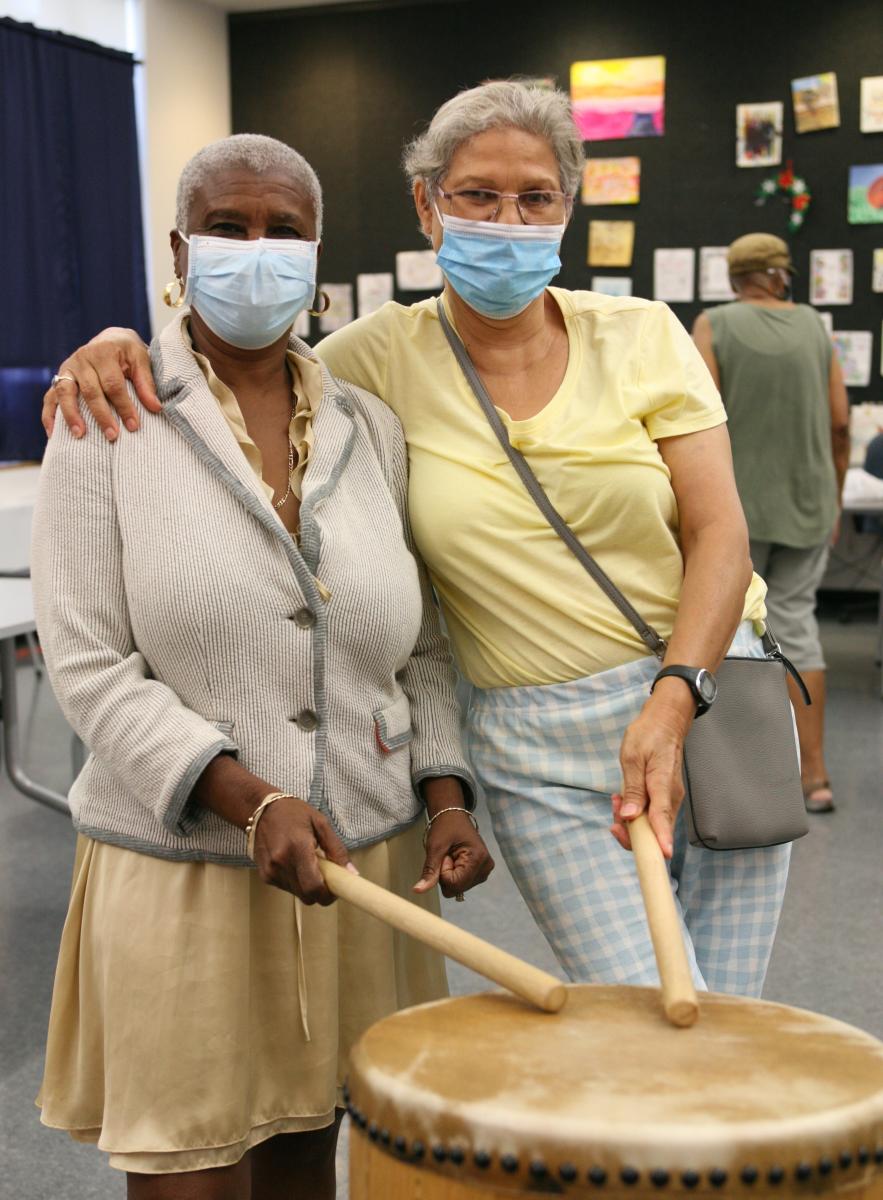 “This place has literally saved my life,” Busby said, noting several losses recently in her family. “I wake up every morning and come here Monday to Friday and it’s the happiest I’ve been in years. Today, I’d just be home moping and sweating.”

Pomales said one of the senior citizen members doesn’t have an air conditioner, but a recent donation through connections at the center allowed them to be able to get an air conditioner into the 90-year-old woman’s home. 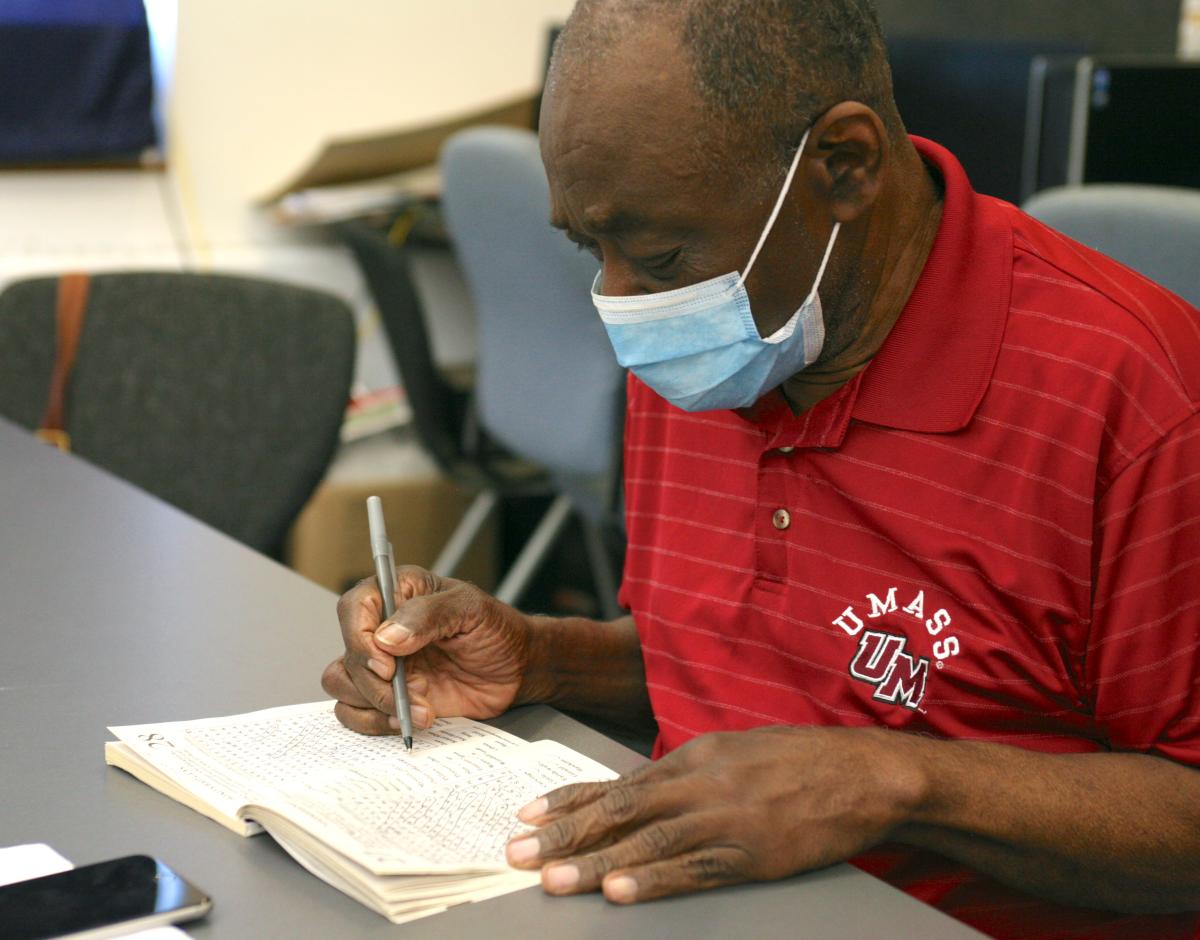 At the Holland Community Center on Geneva Avenue near Bowdoin-Geneva, program director Chenault Terry said they will be keeping the cooling center open for anyone that needs it this weekend.

“When people want to come by and cool off, it can help them,” he said. “A lot of people don’t want to come out of the house, but they know we’re here.”

On Tuesday, the cooling center was open, but all the cooling off was being done outside by the SuperTeen program – whose members engaged in a water balloon fight to beat the heat. In a boys vs. girls matchup, it was hard to tell the winner as everyone was pretty thoroughly soaked. 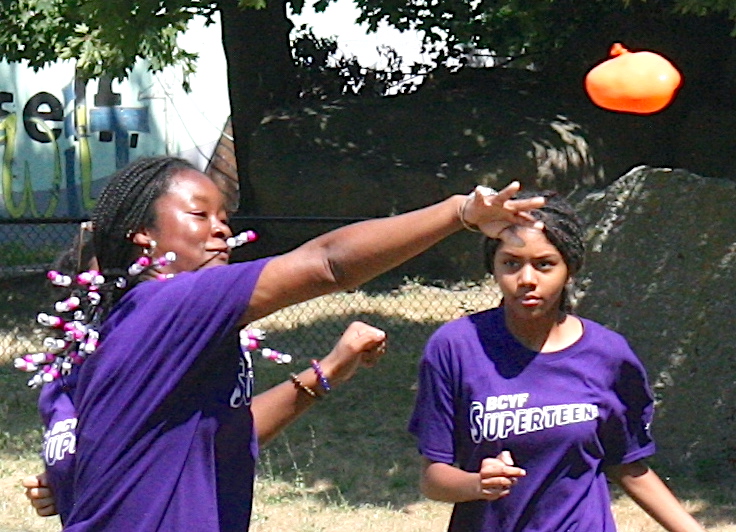 Above: Renee Johnson tosses a water balloon at the other team during a “keeping cool” activity at the Holland Community Center near Bowdoin-Geneva. Seth Daniel photo

“Usually, they just want to go to the gym, but you know it’s hot because they just want to hang out in the cooling center,” laughed Terry as about a dozen teens relaxed in the lounge after the water balloon fight.

In Mattapan, at the Gallivan Community Center, director Jose Rodriguez said they mostly get young people from the neighborhood looking to cool off, but they also get seniors – especially on the weekends if the cooling center is open.

“The seniors definitely call and they will come,” he said. “They make appointments and when they say they’ll be here at 9 a.m., we usually find them waiting outside at 8:55 a.m.”

For the teens and children on Thursday, as the thermometer hit the top of the gauge, kids enjoyed peaceful meditation in the cool gym, hanging out in the computer room, or blasting down an inflatable water slide especially set up for the heat emergency.

And if laughter and smiles were any indication of beating the heat, then the three cooling center sites in Dorchester and Mattapan on Thursday had prevailed over the summer swelter.

The city’s cooling centers across the city, including those in Dorchester and Mattapan, will be open to the public 9 a.m. to 5 p.m. until Sunday, Aug. 7 when the heat emergency is to expire. 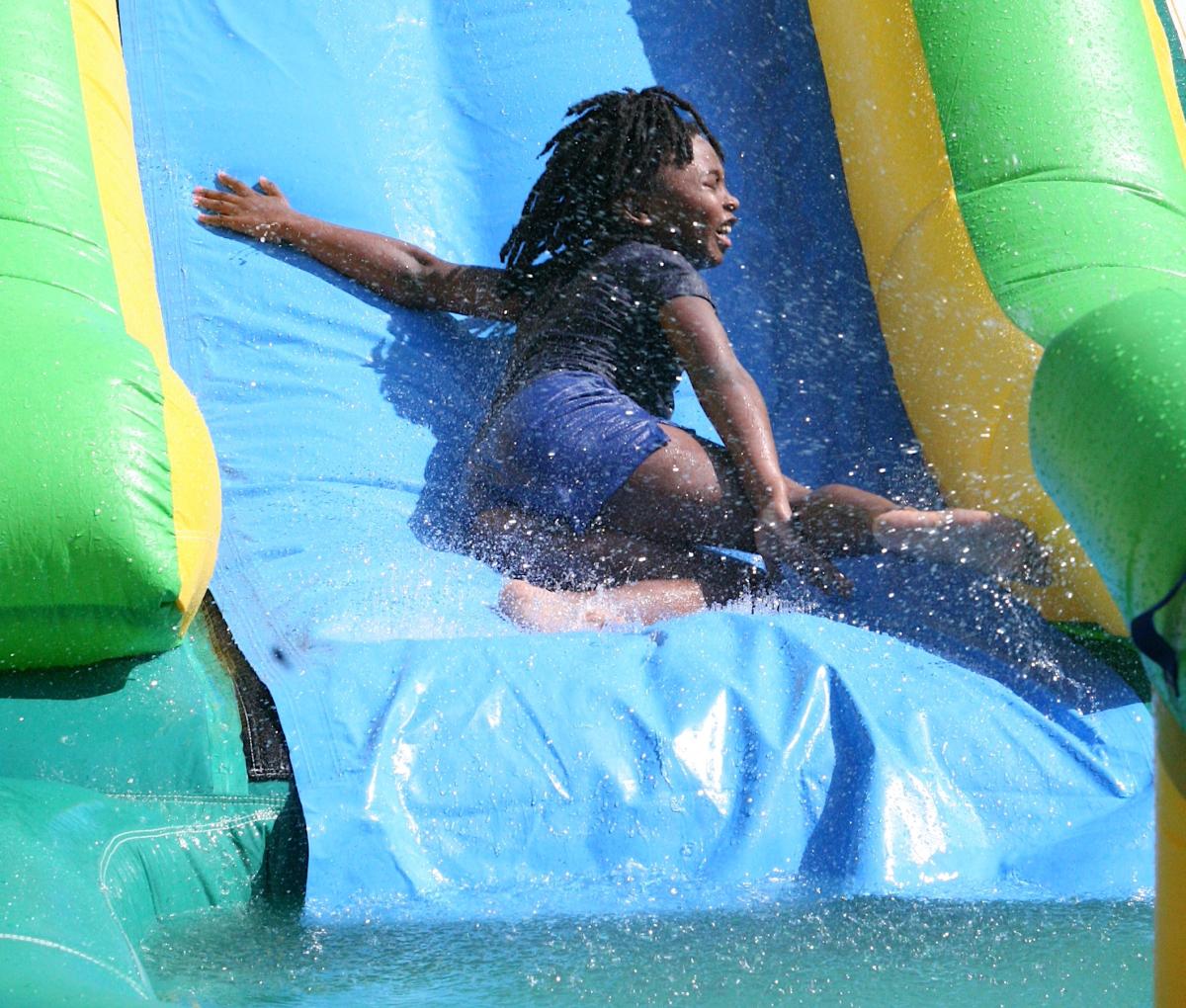 Above: Storm Condre couldn’t get enough of the water slide set up as a cooling center resource at the Gallivan Community Center in Mattapan. Seth Daniel photo