Brooke Charter School Mattapan 7th grader Emily Ramirez lives for sports and craves competition, but far too often urban middle and high school students like her often don’t have the same opportunities to get on a playing field that their suburban and private school counterparts do.

It was in that spirit last Thursday ( May 12), that New England Patriots owner Robert Kraft, wide receiver Kendrick Bourne and a host of non-profit leaders visited the Brooke Mattapan to officially open a brand-new playing field behind the school (which is the former Hecht House) so that students like Ramirez can play, practice, and elevate the Brooke Hawks to trophies and titles.

“Sports are my life,” said Ramirez during the ceremony on Thursday. “I love being on a team and playing all sports. Brooke Mattapan will now have a place to practice and play a game. I love this field. It will give me and my classmates at Brooke Mattapan the opportunity to get better and play sports in high school and beyond. I can’t wait to play soccer in the fall.”

Her classmate, John Gomes, appreciated that he and his fellow flag football teammates will finally have a home field to play on. With the season just about to start, he said they have their sights set on another championship. The team has won flag football titles before, but never have they had a chance to play a home game or be able to consistently practice on their own field.

“Having the opportunity to play on this field and know it’s my team and my field is special,” he said. “My brother helped Brooke Mattapan win its first flag football championship. This year I want to do the same thing, and I want to thank Brooke Mattapan for giving me all these sports opportunities.” 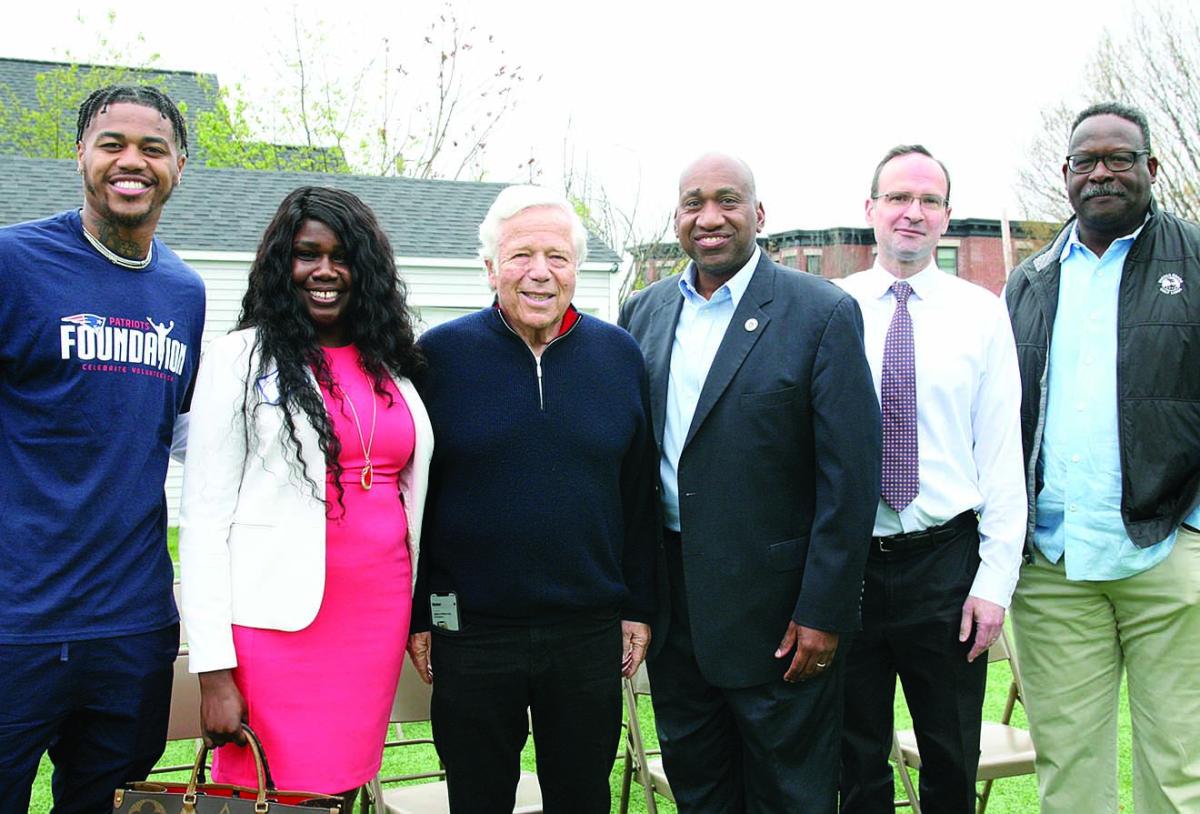 The brand-new turf field and two renovated basketball courts come from a partnership between the New England Patriots, the Local Initiatives Support Corporation (LISC), and the Brooke Charter School network. Constructed in part with a $250,000 grant from the Patriots through the NFL-LISC Grassroots Foundation, the field will serve students from across Brooke’s charter school network and community athletic groups in Lena Park. The field is the largest component of an overall recreation facilities redesign at the Brooke Mattapan campus.

With students chanting “Thank You” in unison and holding up handwritten signs expressing their excitement, Kraft took to the podium and said it was an amazing way to start the day.

“I’m very encouraged you all will be able to use this field for athletics, especially for youth football,” he said. “I expect and hope at least one of you to join the New England Patriots in 15 or 20 years.”

“This field is a great classroom,” said Tippett. “We used to call what we did on our practice field in high school 8th period. If you fail on the field, you learn to get up and try again for success the next day.”

Brooke Mattapan Athletic Director Sean McKenna said the field was previously land that couldn’t be used by the school. Now, he said, they have games and practices booked every day.

“Three years ago, this spot was a bumpy, rocky patch of grass,” he said. “It couldn’t even be used for exercise, let alone practices and games…This field speaks to the fact that people believe in you.”

Said state Rep. Russell Holmes: “This is another $1.75 million investment not just for Brooke Mattapan, but also for the community at large. Our kids don’t just need strong teaching in the classroom, they also need experiences to make them well-rounded students. That is accomplished by having the chance to be on teams like the soccer and flag football.”

The Brooke Mattapan, which serves about 500 children in grades K-7, will begin hosting flag football games this month. It also has a high school next door, and other school buildings in Roslindale and East Boston.