Interim District Attorney Kevin Hayden and his opponent Ricardo Arroyo on Wednesday night faced off over allegations of misconduct at a forum hosted by the Communities of Color (COC) coalition at Mattapan’s Morningstar Baptist Church.

The debate between DA candidates was the second event of three on the coalition’s docket. The moderator, Channel 4’s Jon Keller, kicked it off by addressing the “elephant in the room” and allowed the candidates nearly five minutes of sparring.

Hayden has been accused of squashing a police misconduct case involving the Transit Police, while Arroyo has more recently been accused of sexual assault allegations in his past. Both stories were reported by the Boston Globe in August.

“I have called on (Hayden) to resign and one of the reasons I did that was because there was a Transit Police cover-up where my opponent accepted dollars from a police officer under investigation – his second in command had made guarantees that case would be closed,” Arroyo started.

Arroyo added, regarding the Globe obtaining documentation of the police investigation of his alleged sexual misconduct when he was a teenager, “The only other place (aside from the Boston Police) is the Suffolk County District Attorney’s Office. I’ve called for an independent investigation and District Attorney Hayden has not followed up with that.”

Hayden said he felt like Arroyo should be disqualified based on the allegations the Globe published this week, including one where an alleged victim of Arroyo came forward this week to confirm her allegations from 2005 were true.

“I believe the recent allegations regarding Councillor Arroyo are both horrifying and disqualifying,” said Hayden. “Ultimately the voters are going to have to make a determination if he is qualified for the position. I would submit they will have to decide whether or not he has the moral character to do the job as district attorney based on these allegations – based on the fact that he has repeatedly lied when questioned about the allegations on top of the actual allegations themselves.”

Hayden also noted Arroyo cannot adequately explain why he contacted one of the alleged sexual assault victims only five hours after supposedly first hearing about them from the Globe. The Globe in their interview did not inform Arroyo who the victims were.

“That is a truth that simply can’t be gotten around,” Hayden said.

Arroyo countered by saying he has never lied about anything in his life.

“I’ve never once lied about anything that has happened in my life,” he said. “These allegations were news to me two weeks ago when the Boston Globe brought them to my attention. They are special files that are sealed, which means when I’ve done my own background checks they don’t even appear. So, the leaking of those files comes with a one-year incarceration.”

He also alleged that Hayden had sent a private detective named Brian Gill – a former Boston Police detective – to poke around and investigate one of the alleged victims. Hayden said that was not the case. “I’m not sure who that is,” he said. “I don’t know him. I actually heard his name for the first time a couple of days ago. I don’t know what he did or didn’t do, but I can assure you he is not affiliated with my campaign.”

He then turned the attention back to the allegations against Arroyo. “There is no way he did not know about these allegations,” he said. “It’s simply indisputable at this point. I think the voters are going to have to make that decision for themselves, but I think the facts do speak for themselves.”

Arroyo responded that the allegations were declared unfounded “in real time,” and he shouldn’t have to defend them.

“For me to stand here and have to explain to a sitting district attorney what the presumption of innocence rather than a presumption of guilt means for our community is incredibly disappointing,” he said.

The debate also touched on experience. Hayden has touted his time as an attorney and as a prosecutor as a key reason to vote for him, but Arroyo, in his closing statement, pushed back on the experience card.

Hayden, in his closing statement, said Arroyo simply isn’t qualified for the office. “I’ve tried more cases in six months than he’s tried in his entire life,” said Hayden. “Three and a half years as a criminal defense attorney and three years as a city councillor do not qualify you to run a state agency.” 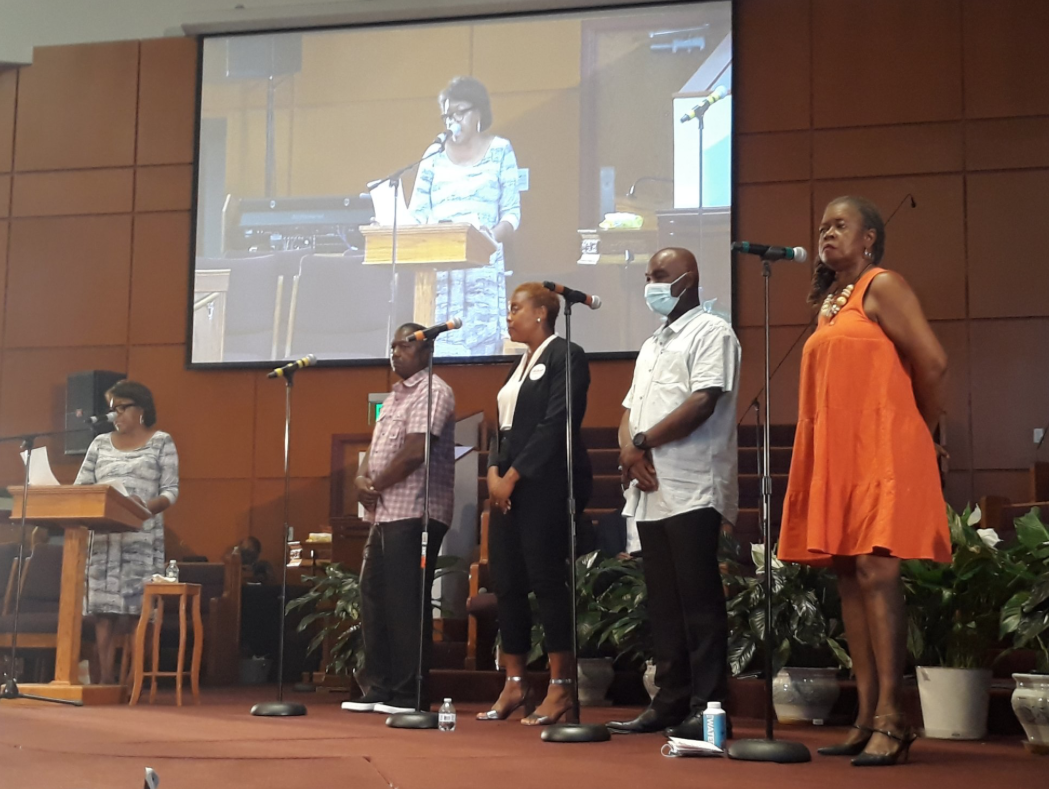 Darryl Smith, a Communities of Color co-founder, said the organization was happy to have been able to convene an important political discussion right in the community, right on Blue Hill Avenue. “What a great night for the political process in Boston and especially in Mattapan,” said Smith. “The event had over 700 attendees and almost 1,000 live stream viewers,” he said.

“There was great energy at the debate and the candidates didn't disappoint the audience. The DA candidates came out swinging from the start, the Senate candidates made the mark on the Blue Hill Avenue MBTA center-lane bus and the representatives square off on issues ranging Franklin Park, American Legion Highway and beyond. COC provided the community with a window into the Black and Brown political landscape of Boston. There was no better front row seat in politics than the COC debate.”

The center-lane bus plan for Blue Hill Avenue was front and center in the Second Suffolk portion of the forum. Candidates Miniard Culpepper, Nika Elugardo, James Grant and Dianne Wilkerson were in attendance.

Candidate Liz Miranda was not able to attend due to contracting COVID-19. The venue was not prepared for an online option, so Miranda did not participate.

The center-lane bus plan has drawn controversy, and most Senate candidates are opposed to it, though Elugardo did make it clear on Wednesday night she was the only candidate that supports the center lane.

After making an initial statement about bringing the community together to make decisions, moderator Holmes Ward thought all four candidates opposed the proposal, but Elugardo said she didn’t.

Elugardo said they needed to look at the data and reduce exhaust and other negative impacts of cars on the community. “That may include a center-lane bus,” she said. “I know I stand alone on that.”

She added that she would make sure businesses and residents would be mitigated for any negative effects that a center-lane bus could bring. She suggested tax credits and even an easing of liquor license restrictions for the corridor.

Meanwhile, Wilkerson again voiced her opposition. “Here’s the rundown,” she said. “The idea of running a center-lane bus down Blue Hill Avenue may be the worst transportation idea ever presented to the community.”

Culpepper also still opposed the idea. “I cannot support a bus lane down the center of Blue Hill Avenue, especially when they tell you it will be similar to the one on Seaver Street,” he said.

“I cannot support it now, but I’m waiting for the data (from the study), and we’ll make decisions at that time.”

Miranda in the previous COC debate said she didn’t think the community had been invited to participate in the decision on the center-lane bus proposal and pointed to the idea of “Green Racism.” She did not say she outright opposed the idea.