Life didn’t seem worth living for Beth Fournier after a devastating illness that left her paralyzed, blind, and using a wheelchair before the age of 30. Candidly, she said, she wanted to die.

Then, after she settled in at the Boston Home on Dorchester Avenue, she picked up a paint brush and found a piece of freedom and hope through watercolor painting.

Now 33, Fournier will have two watercolor pieces on display at the Boston Home’s annual art show in the Mary Jo Montani Gallery on the campus this week (Thurs., Sept. 15, from 6 p.m. to 8 p.m). The event represents a life-turning experience on a journey that Fournier told the Reporter in an interview was about keeping at living after she was struck seven years ago by a disease that attacked her central nervous system and quickly put her in a lengthy coma. And that was just the beginning of her travails.

“I really didn’t want to be alive,” said Fournier about the lowest times during her illness. “I didn’t know anything, and I couldn’t even see anything. It was very hard for me at first because I was very angry about being at the Boston Home. I was not pleased with it because I was paralyzed and didn’t know what was going on. I was really sad and depressed. I just wanted to know why I didn’t die. I wanted to die, but I didn’t. So, I said, ‘Okay, I’m alive then. Fine.’”

That new attitude led her to a poetry group and eventually to a specialized watercolor class that greatly lifted her spirits. After completing her first painting, “Rhapsody in Blue” – which is one of the works on display this week – she said she was ready to face life again. “I did it and I was proud of it,” she said. “I was proud of myself for making noise that I wanted to paint, and I wanted to do things everyone else can do. I wanted to live. It was the first time I had wanted to live, honestly, since I had gotten sick.”

Fournier said she was married and at age 26 working as a guidance counselor at a Greater Boston area high school. She had friends from high school and college and had her life planned out in a very specific way – similar to how she was helping her students plan out their lives. Then one morning when she was getting ready for work, she was troubled by a cough and cold.

She tried to swallow a pill for the cough, but she couldn’t. Then she couldn’t swallow water, and her arms went numb. Her husband took her to the hospital and that same day she received a diagnosis of Guillain-Barre Syndrome – a disease where the body attacks its own nervous structure. It was so pronounced that day that she slipped into the coma while at the hospital. 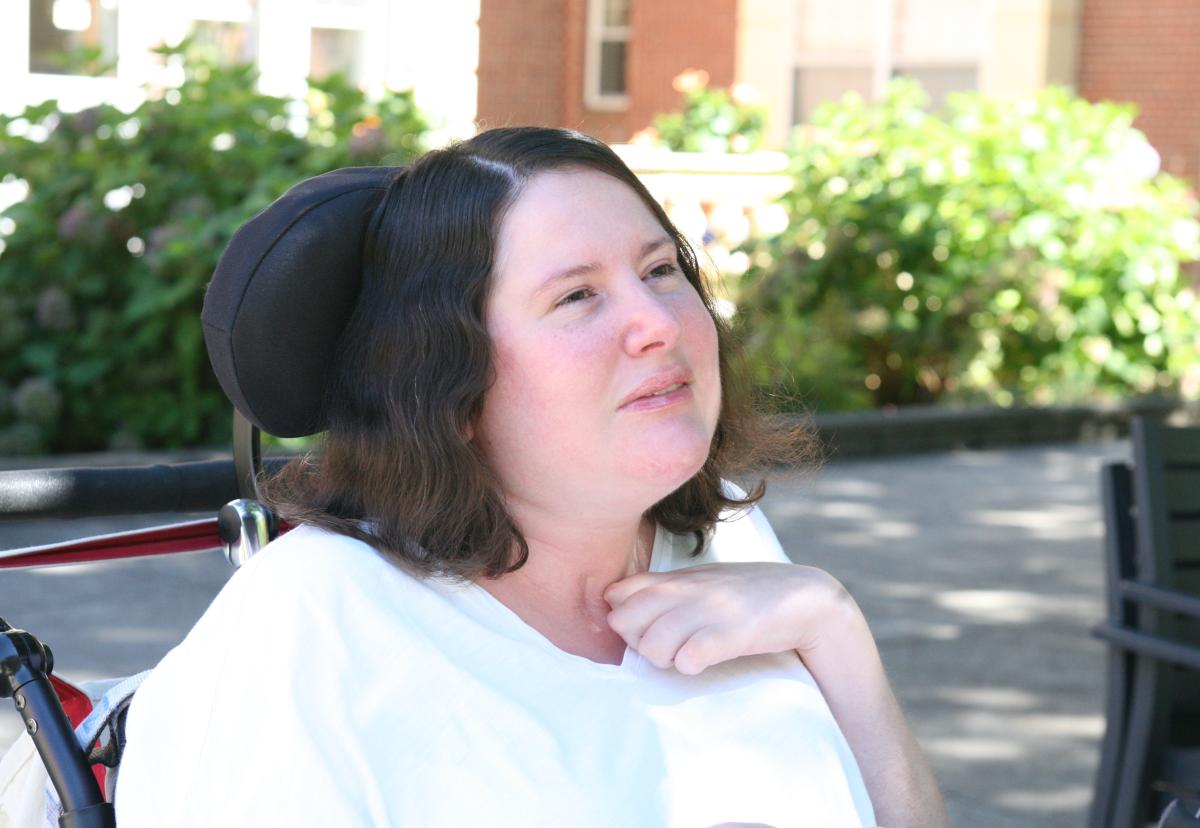 “The next thing I remember is I woke up one day and couldn’t think,” she said. “My nurse was reading Harry Potter to me. I had been in a coma for about three months, but I didn’t know that. I felt like I didn’t want to be there anymore, and the nurse saw me wake up and asked if I could hear her. I shook my head [yes].”

What doctors believed would be a one-year recovery period ended up being a life-changing event when the disease attacked her optic nerve, rendering her blind, and then left her paralyzed in a wheelchair. She had nowhere to go but to her parents’ home, where she went through a divorce. Then came 2020 and the pandemic and she contracted Covid-19, which put her back in the hospital for a month. It was hard to find anywhere that would admit her on her discharge, given the needs she had.

“I was married and had my life all mapped out and then life happened,” she said. I didn’t know how unfair life could be until I got sick.”

After a brief stay at a facility in Natick that she “hated,” Fournier moved to the Boston Home. The change in venue to the Boston Home marked a significant turn in the road for her. Slowly, she began to hear comforting sounds. People would say, “Hi Beth,” as they passed by her room, and she got a good feeling from the other residents. She began to feel at ease and joined the poetry and writing group. That’s when she started asking Activities Director Kerry Donahue and Watercolor Teacher Lisa Spacco-Pearlstein if she could paint. They weren’t sure if it would work, given her blindness and paralysis, but they set their minds to trying.

“She expressed an interest after the art show the first year she was here,” said Donahue. “We never made any promises, but said we’d see what happens and things just fell into place. It was a great blessing…The show is the highlight of the year. Residents work hard on the show, but they also come down each week because it’s so empowering to paint and find a sense of identity.”

An intern at the Boston Home, Maddy Hoy, agreed to work with Fournier on her painting dream, and they were able to work out a system whereby Beth describes the colors she wants and the shape and movement, and Hoy assists in executing the painting.

“She conjures in her mind exactly what colors she wants, describing them as ‘luna moth green’ or ‘wisteria purple’ and then she expresses the shape or movement these distinct colors take on,” said Hoy. “While Beth is always the one holding the brush, it’s an honor to work alongside her to bring her artistic visions to life and let others see what she sees.”

Nowadays, Fournier takes her morning coffee with friends as they talk about the news of the day. She paints and writes poetry, and even enjoys a cocktail on occasion. She said she wanted everyone outside of the Boston Home to know that residents there are happy, having fun, and enjoying life.

“People see you in a wheelchair and don’t think you can have fun or live life,” she said. “I thought that way, too, before I got sick…I don’t want anyone feeling sorry for me. I don’t want pity. I’m a person and I’m happy and I can be happy. All of us here are happy.”

The Boston Home Art Show event on Thurs., Sept. 15 is free and open to the public, but please RSVP. For more info, go here.