The destroyer USS Plunkett: Always ready for the next assignment. US Navy photo

On Sept. 2, 1945, Gen. Douglas MacArthur, presiding over the Japanese surrender on the battleship USS Missouri in Tokyo Bay, formally closed the books on World War II with the words, “These proceedings are closed.” They were hardly the last words to be said about what continues to be seen as the worst catastrophe precipitated by humans in the history of the world – as many as 85 million deaths among military and civilian populations during a conflict that many historians suggest started with the signing of the treaty at Versailles by the defeated Germans in 1919 that formally ended World War I, the so-called “war to end all wars.”

Official military and diplomatic reports in the immediate aftermath detailed the who, what, where, and how of the sprawl of war centered on the months between September 1, 1939 and Aug. 15, 1945, when Japanese Emperor Hirohito called on his subjects to lay down their arms, an outlay that was followed by the second-guessing of historians, memoirs, novels, biographies, movies, television series, and other dispatches that have continued to attract substantial interest worldwide ever since.

Among those trillions of words and photographs and films is a book titled “Unsinkable,” an account of the wartime service of the destroyer USS Plunkett, named for a World War I naval commander, and its hardy crew that takes deep dives into the private lives and service on shore and at sea of five of its sailors as their ship engaged with the Axis forces in every invasion of Europe from Casablanca in November 1942 to Gela in Sicily, then to Salerno and Anzio in Italy in January 1944, then on, after substantial repair, to Omaha Beach in Normandy in June 1944, and finally in the Allied invasion of Southern France two months later.

The author, James Sullivan, a Maine resident with strong roots in Dorchester, South Boston, and Quincy, is a gifted storyteller whose devotion to detail in every aspect of the story he is telling demands a reader’s consideration. He also has, as they say, skin in the game: a great-uncle who, firing away from his gun tub, gave his life in service to his country off Anzio Beach in January 1944 as he was fending off German airplanes and submarines that brought the war specifically to the Plunkett with devastating consequences – and as his brother Frank was engaged in the fight as a medic with the US Fifth Army on the nearby shoreline.

Along with John “Johnny” Gallagher, of an Oakton Avenue, Dorchester, family that saw four of its men serve during the war, the author uses the reporter’s tools to high effect – official papers, letters between home and sea, witness accounts from the heat of battle, phone calls, and, in three cases, nonagenarian memories stretching back 70 years to when the men reminiscing were young and everything was ahead of them. They were:

• Edward J. Burke, out of a small town near Wilkes-Barre, Pennsylvania, the captain of “Plunkett,” as its crew called their home on the high seas. An Annapolis man, Burke generally played things by the book, earning widespread acclaim for how he handled his ship in combat. He liked to box, and occasionally welcomed sparring partners on the ship’s crew to swap punches with him on the fantail.

• Lieutenant Kenneth R. Brown, from Chicago, another Annapolis grad. He with some regularity gave the captain grief – at risk to his career at times – but attracted only superlatives for the job he did as the “gun boss” while perched atop the ship guiding the firing of the batteries below
• James D. Feltz, from Overland, Missouri, a water tender and a fire room operative at general quarters to whose life and marriage the author brings the zeal and insight of a society page reporter.

• John P. Simpson, a farm boy from near Atlanta who was the Plunkett’s damage control officer. His main goal, he told the captain early on, was to get transferred to the Pacific, where the Navy was in charge. He got his wish, after a while.

From late 1942 on, the narrative moves along to a rhythm set to the tune of constant calls to battle stations as the ship took on assignment after assignment, crisscrossing waters rife with German ships and the armored sharks of the U-Boat service. The author occasionally administers a taste of the tedium that can beset a warship between assignments and during back-and-forth trips to ports of call 1,500 miles and more apart, but he never allows his readers to lose the sense that everyone on the ship is always on high alert for the deadly patches ever in the offing.

The long keystone chapter on the battle at Anzio is a masterly chronicle of chaos, courage under fire, pathos, and unremitting death at sea. In the late afternoon of Jan. 24, 1944, the Luftwaffe launched a dozen or more bombers against the Plunkett. As the continual strafing for 25 minutes against the defensive fire of the ship’s crew, one bomb, a 550-pounder, cratered through the main deck and into the guts of the ship, setting off a horrendous fire that left bodies and body parts strewn about the vessel and survivors trying to help the wounded while taking stock of the catastrophe. 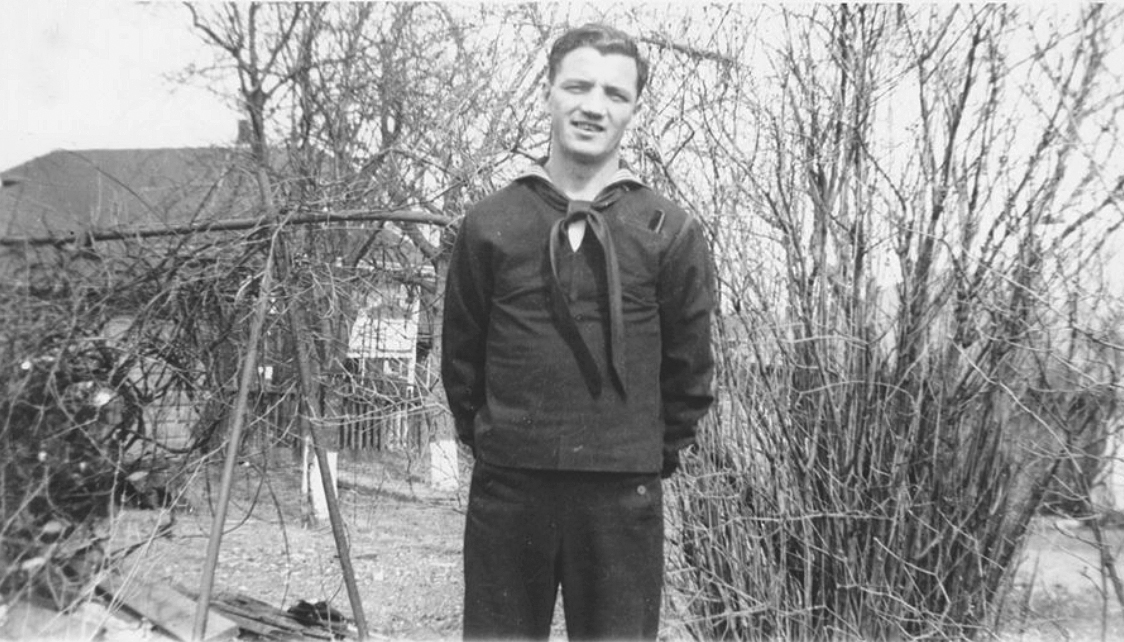 John Gallagher in the backyard on Oakton Avenue in early 1942. At midnight on Dec. 7, 1941, after the Japanese attack on Pearl Harbor, he showed up at the federal building in Boston’s Post Office Square, ready to enlist.

The early tally over the next days out of the 285 men listed as serving on the Plunkett that month was 24 identified as dead, among them Johnny Gallagher of Oakton Avenue, Dorchester, his back fatally bloodied by shrapnel. There were 29 sailors called missing, meaning presumed dead.

Amidst all this, the USS Plunkett, the US Navy’s “fightingest” ship, afire and a mangled wreck, escaped the depths of the Tyrrhenian Sea and as soon as the surviving crew members made things ready, she began to move slowly toward safe harbor at Palermo. More battle station calls lay ahead. 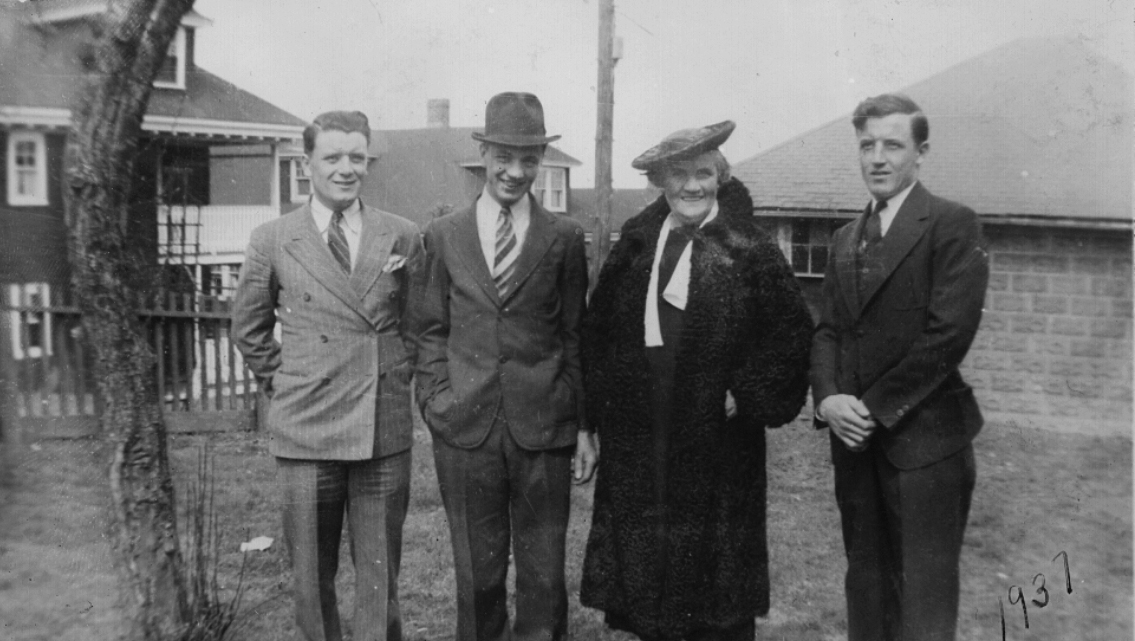 •••
The Dorchester element in the story – what the Gallaghers, especially Johnny, were up to during the war – flows in and out of the narrative. Four of the five boys – Tom and Johnny and Frank and Joey – were in the service. The fifth, Charlie, married to Bernice Meehan, was selected by the local draft board as the Gallagher man who would stay back and take care of things at home along with his widowed mother Martha and his sisters Helen and Gertrude. 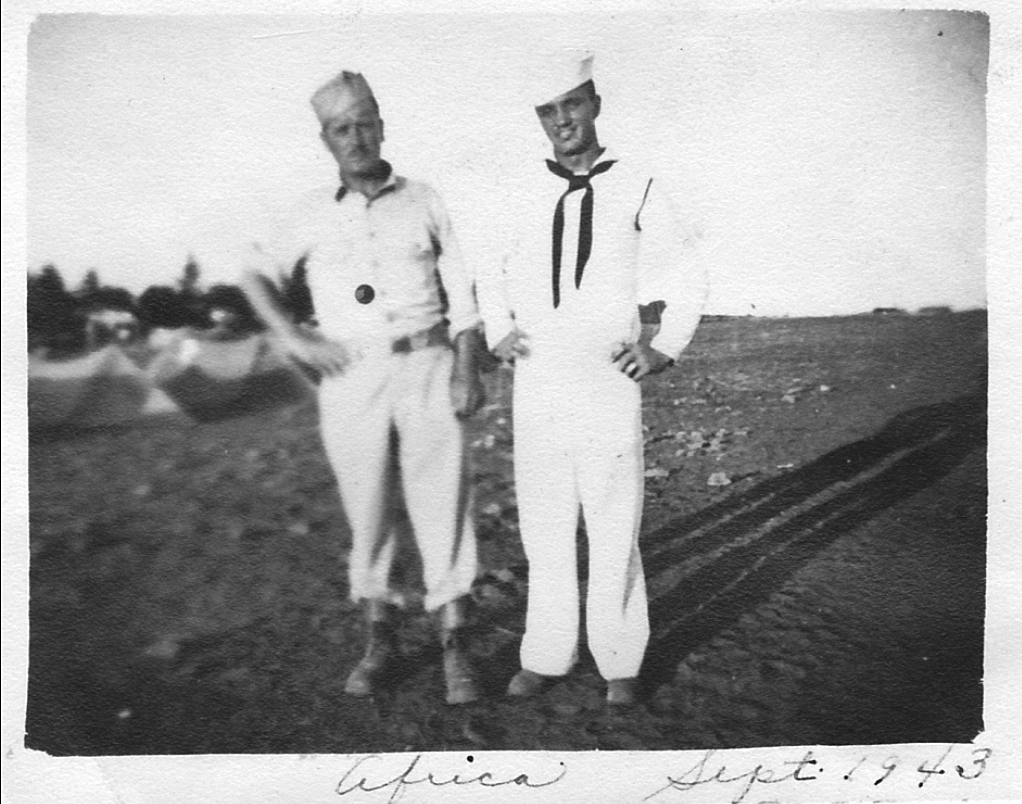 After the Plunkett docked in Mers el Kebir, Algeria, in September 1943, John, at right, found his brother in a staging area at Arzew, outside Oran in North Africa just before the first invasion of the European mainland at Salerno.

For years after the war, Frank would regale family gatherings by sharing the story of how he managed while on the ground with the Army at Anzio in January 1944 to make his way on the eve of battle onto the Plunkett, harbored nearby, and greet his brother Johnny – but only after he was given a public chewing out on deck by Captain Burke that was loud enough to alert Johnny to the soldier standing in front of his captain who was asking for him. The commander let Frank stay until the last minute, where the brothers embraced for their final time together.

About the Author
James Sullivan was born and raised in Quincy, MA. A graduate of Colby College, he received a master’s in Fine Arts from the Iowa Writers’ Workshop, where he was a teaching-writing fellow. The author of “Over the Moat,” an account of his travels by bike from Saigon to Hanoi in Vietnam in the early 1990s that turned into a love story. He lives with his family outside Portland, Maine.
•••
The author will talk about “Unsinkable” at the BPL’s Adams Street branch on Wed., May 18, from 6:30 p.m. to 7:45 p.m.

Whatever became of John’s gal Ruth?

One of John Gallagher’s more faithful correspondents during the war was a woman from his corner in Dorchester named Ruth. In the six letters the family has from John during the war, it’s clear a romance was brewing between them.

While John was away, Ruth would occasionally visit John’s mother on Oakton Avenue with her friend, Sophie Tabayka (who would later marry Frank Gallagher).

There were some mail calls, John wrote in one letter, when he’d get three letters from Ruthie per week. By December 1943, the back and forth between John and Ruthie, whose surname we don’t know, had sparked talk of marriage, but it wouldn’t happen as long as John was away in the war.

“This is no outfit to be in for a married man. I know I am lucky having such a nice girl waiting for my return,” he wrote home to Dorchester on Christmas Day in 1943. John’s death, one month later, put an end to that fledgling romance.

Whatever became of Ruthie, the family doesn’t know.
– JAMES SULLIVAN