Two finalists for the District 4 seat on the Boston City Council — Brian Worrell and former state Rep. Evandro Carvalho — are busy on the campaign trail this month as they seek to replace Andrea Campbell, who opted to leave the Mattapan-Dorchester seat behind to mount a mayoral candidacy.

Worrell, a first-time candidate, posted an impressive first-place victory in the Sept. 14 election, winning a 25 percent share— 2,498 votes in a nine-person field. Carvalho was next up with 1,835 votes or 19 percent, enough to earn a spot on the Nov. 2 ballot.

After the Sept. 14 election, Carvalho won an endorsement from the Ward 15 Democratic Committee, a group that knows him well from his tenure as a state representative in the Fifth Suffolk district. But, to date, none of their former rivals for the council seat have offered public support for either candidate. 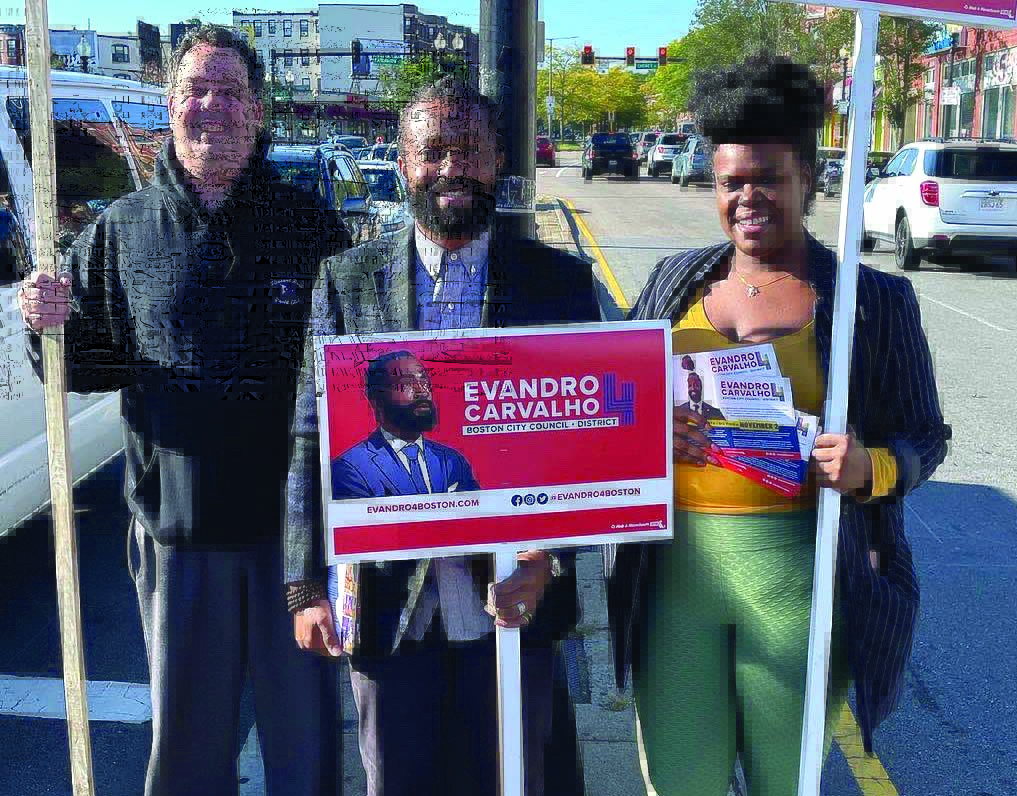 Josette Williams, who finished fourth with about 12 percent, said she instead plans to push more people to come out and remedy the low turnout from Sept. 14.

“I have chosen not to endorse in this race,” said Williams. “What’s important to me is to endorse the vote, as I had 1,174 people that trusted me enough to give me their vote and it’s important to me to honor that – to honor the grass roots effort we put together…I will be doing my homework and making my own decision on Election Day for the District 4 race, and I would just ask all those that voted me to do their homework, come to their own conclusions, and definitely get out and vote again.”

The same is true for Will Dickerson III, who won about 10 percent of the vote, but said he is focusing his support now for mayoral candidate Michelle Wu and At-large Council candidate David Halbert.

“I am not going to be endorsing in District 4,” he said. “I like and am friends with both candidates left in the race and I wish them both well… I will be out on Election Day and working to get the vote out in this and other races.”

Former District 4 candidate Deeqo Jibril indicated through a spokesperson that she would not be formally endorsing anyone, although a photo of Jibril and Worrell was posted on social media. Former candidates Joel Richards and Leonard Lee didn’t return e-mails about their intentions.

Both finalists are unfazed by the absence of formal endorsements from the rest of the field. Both Carvalho and Worrell have been very active on the trail since Sept. 14, carving out their own messaging in the race. 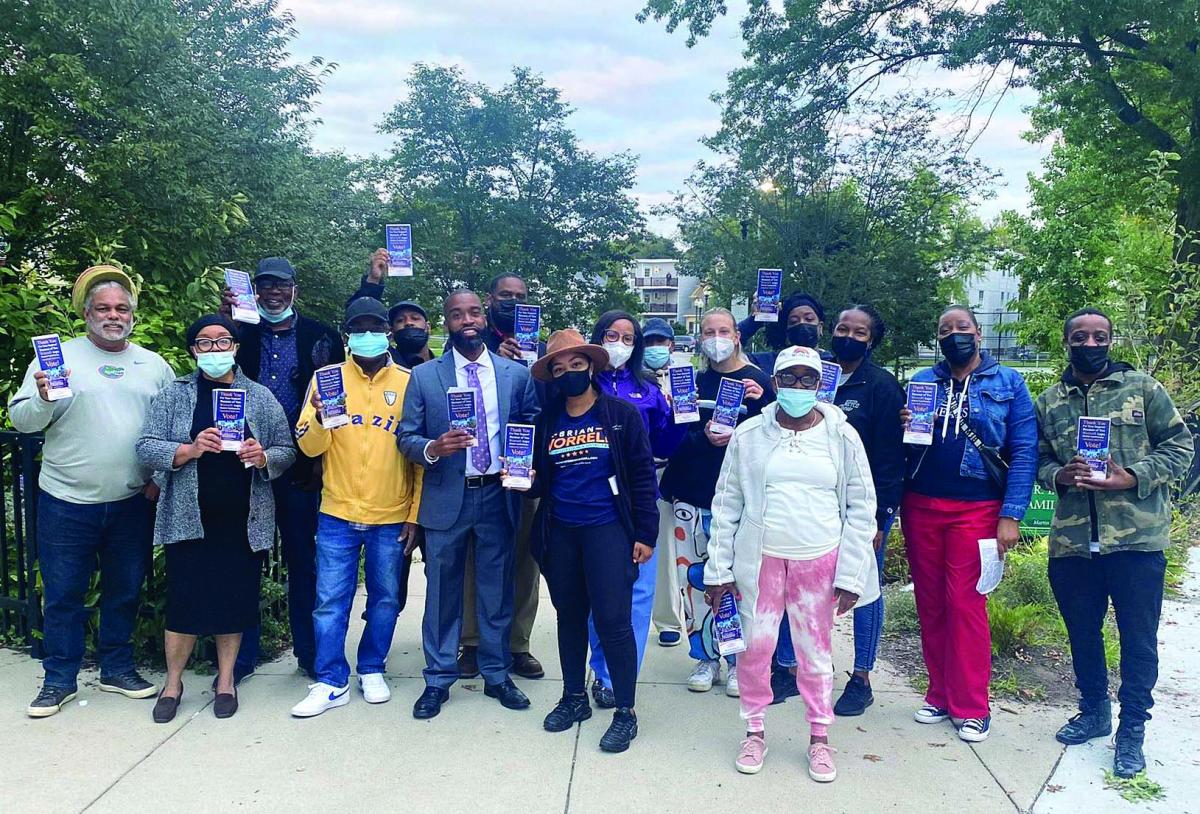 Brian Worrell, who topped the ticket in the District 4 preliminary, is shown last week with campaign volunteers as they go door to door canvassing voters. Seth Daniel photo

“No one person can do this alone,” said Worrell. “I’ve been meeting with the candidates that were in the race to continue conversations about the issues they talked about and the energy and campaigns they ran. I don’t need to be the person in the spotlight all the time…Others may want to take on leadership roles, too. I’ve been having those conversations with the candidates…It’s going to take all of us and that’s what I want to push forward. It’s going to take everyone in this district.

He added: “I’m not going to take the usual political route. I’m taking the community coalition path. I’m coming with a new approach, a new set of directives, and a new set of actions.”

Carvalho said he expects to gain more vocal support from leaders in the weeks to come.

“I have lost a campaign and I know how hard it is to know what is next, but…in the final stages of the campaign, hopefully we’ll get some of them on board with us,” he said.

Both Worrell and Carvalho are not unknown in the district, even though both are first-time candidates for City Council. As a former state representative for the area, Carvalho said he rarely runs into someone who doesn’t know him already or doesn’t know of the work he has done in the State House or leading the city’s Human Rights Commission.

“I’m day-one-ready and people know I’m day-one-ready,” he said. “They remember I served them for five years on Beacon Hill. My brand is out there – people don’t have to guess what they’ll get from me… We need fresh ideas but we also need someone with stability and someone like me ready to hit the ground running.”

Meanwhile, Worrell and his family are deeply rooted in District 4. His grandparents moved to Dorchester in the 1960s and he has lived there all his life. When knocking on doors, he said, there rarely is a time when those who answer don’t know someone in the Worrell family. But his strategy in the election has been to get in the race early, and then to simply do the job of a city councillor – sort of an on-the-job test run while conducting a campaign.

“Like Maya Angelou said, ‘When someone shows you who they are, you believe them,’” he said. “I’m trying to show our community what I’ll be doing if elected. It’s not that I’ll start doing something then. If you truly care about the community, you’ll do the work now and there’ll be a sense of urgency. It’s not that on Day 1 I’ll start. It’s what are you doing now. In this campaign we have been in close contact with our city councillor to help fix constituent issues, to fix street lights, stop signs, and crosswalks. If you do care, you’re not going to wait. You’ll do it all now as a candidate…”

As the only candidate who has served as an elected official, Carvalho is focusing on issues he worked on as a state representative, such as police reform.

“I was Black Lives Matter before it existed,” he said. “I just turned 40 and I was elected at 32 and have the experience to know the issues in the community. I’ve been there to unapologetically – as everyone says now - push the issues that matter…I can come in and be a major influence in that space right away.”

Worrell, on the flip side, said he brings a new way of doing things to the seat, if elected. He said his idea of collaborative leadership will change the way residents are represented.

“We have this window where everyone is talking about equality and inclusion and I don’t know any neighborhoods in Boston that need that more than Dorchester and Mattapan,” he said. “The old ways of doing things have not worked. I’m not a career politician and I’m not looking to use our community as a steppingstone to get to the next level. It’s about doing the work and doing it now.”