FIRST of TWO – Stanley Wojtas, an Emergency Medical Technician with Brewster Ambulance Service, received his first dose of the Covid-19 vaccine from Susan Hagenty, RN, at Dorchester’s Carney Hospital on Tuesday morning. Carney — which has already vaccinated all employees who asked for the shots—expects to vaccinate at least 25 first responders this week while registering more. Said Wojtas: “I believe everyone should get it. This is the only way we can get over this pandemic.” Carney Hospital photo

With the Covid-19 vaccine in the early stages of the rollout in Massachusetts, a new polling report indicates that major disparities exist among different populations within the city of Boston as to whether or not to get vaccinated.

In the summer of 2020, the Boston Area Research Initiative (BARI) at Northeastern University, the Center for Survey Research (CSR) at University of Massachusetts Boston, and the Boston Public Health Commission (BPHC) conducted a survey among 1,626 Bostonians about their experiences during the first months of the COVID-19 pandemic.

In a mail and web-based follow-up survey conducted in September 2020, respondents were asked about their plans with respect to taking the vaccine – definitely, probably, probably not, or definitely not.

Extending the percentage of respondents’ negative answers in the report about vaccination preferences to the city’s overall population of close to 700,000 suggests the following in rounded-off numbers: 140,000 residents in all are not planning to take the vaccine; 85,000 Black residents say they have little to no interest in getting the medication; 33,000 Hispanic residents are saying no to the program; and 80,000 women say they won’t participate, either.

These numbers stand in stark contrast to statistics reported from other demographics: over 90 percent of white and Asian/Pacific Islanders surveyed said they would probably or definitely plan to get vaccinated, according to the report. That gap, said UMass Boston Chancellor Marcelo Suárez-Orozco, stems from a relationship between Black and brown communities and the US government that has long been characterized by mistrust.

“The reasons for the disparities identified by this research are complex and deep-seated – from cultural differences to the assault on science to the horrific history of medical experimentation and abuse that was especially acute in US racialized populations,” he said. “It’s understandable why some folks might be skeptical.”

“Because of health inequities throughout our past, it came as no surprise that Covid-19 has disproportionately impacted low-income communities and people of color,” she said. “If we are going to minimize racial health disparities in the future, we need to prioritize vaccinating and testing those who have not only been hit the hardest by the pandemic, but also who our system has historically placed at the back of the line.” 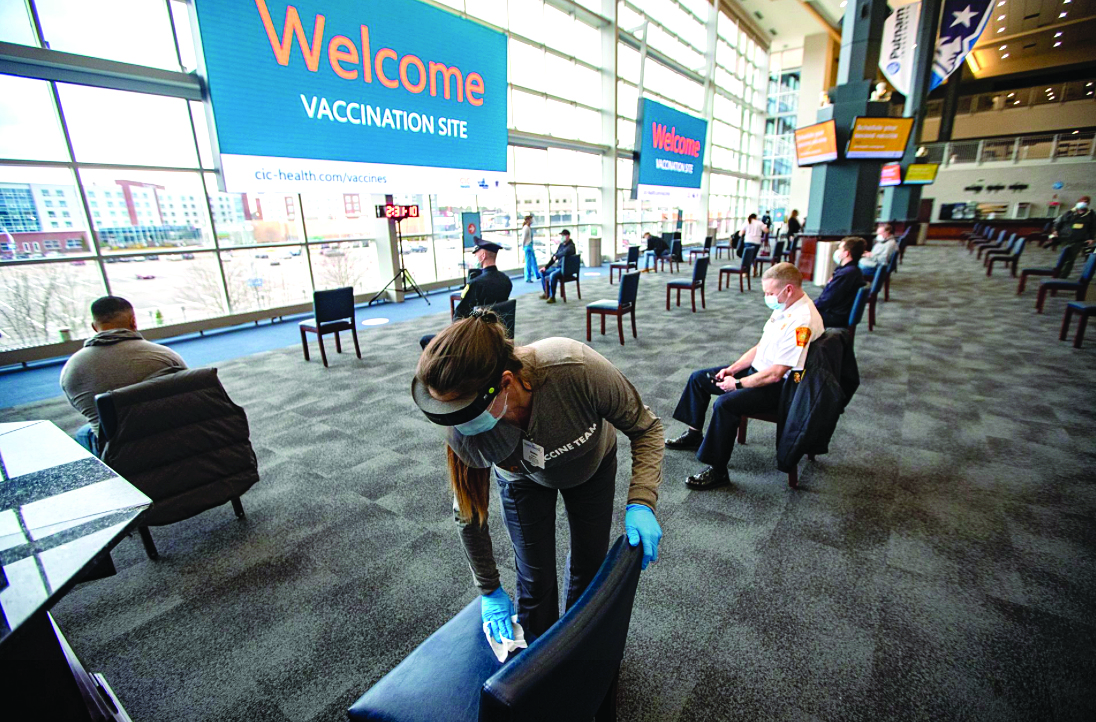 First responders were shown in a waiting area at Gillette Stadium on Jan. 15 after receiving a dose of the Moderna COVID-19 vaccine. Patients who receive the vaccine must sit in a waiting area for 15 minutes before leaving to ensure they do not have any adverse reactions to the medication. Jesse Costa/WBUR photo

Dr. Cassandra Pierre, an epidemiologist at Boston Medical Center and a Hyde Park resident, described the gap between those eager to get the vaccine and those who remain skeptical as a “trust deficit. These are understandable, reasonable reactions to centuries of discrimination and bias in society in general but also within the health care system,” she said. “Education is only part of the answer because many people are uneasy because of that history of discrimination. I think some people are rightly thinking, ‘Why as a Black person are you suddenly so concerned about me getting vaccinated when just six months ago you couldn’t care less whether or not this virus was decimating my community?’”

A sense of urgency is needed to address people’s fears and concerns before the virus can continue to spread and claim more lives, Pierre said. Explaining to patients what exactly is in the vaccine and how it works – introducing mRNA to the body that creates proteins and develops an immune response – sometimes helps.

Other times, statistics do the trick: Severe allergic reactions are “very, very rare,” she said, and occur in 1 in 90,000 patients, a tiny ratio considering the 42 million people worldwide who have already been vaccinated.

Pierre described her own experience receiving the vaccine as going smoothly aside from some slight soreness at the injection site, which is normal for most vaccines.

“I really want people to take from the system what they need. We may not trust the government, we may not always trust the health care system, and with good reason, but this is something that has been shown and demonstrated to be safe and effective,” she said.

Pierre, who is Haitian-American, acknowledged that Boston’s Haitian immigrant communities have been hit hard by the pandemic and urged vaccination as a vital step to recovery.

“The Haitian-American community is not a monolith,” she said. “There are a lot of young people and older people that have different views. Some people are very much willing and excited to take the vaccine and some people are skeptical. We are a very family-based society and culture. There are many milestones that are celebrated with food and family, and this pandemic has frayed the bonds of our community. We can’t sustain like this, and for that reason, we need to take advantage of what’s being offered.”

Most Covid-facing healthcare workers and first responders have already been vaccinated. On Monday, vulnerable communities in Massachusetts congregate care facilities — group homes, shelters, and correctional facilities —became eligible to receive the vaccine. Vaccinating the rest of the general public will begin in February, according to the Department of Public Health’s distribution timeline, as mass vaccination sites continue to pop up across the commonwealth.

A report from the state’s Department of Public Health shows that, as of Jan. 12, a total of 347,450 doses had been shipped to Massachusetts, and 239,147 of those doses — a little more than two-thirds — have been administered.

Gov. Baker said he anticipates there will be four or five such mass vaccination sites set up around the state by the end of the month. The combination of those locations, pharmacies, health care providers, and community health centers “starts to look like the type of infrastructure that we’ll need to start doing thousands and thousands and thousands of these every day,” the governor said.

“But, again, we need to know that the vaccine is actually going to be coming in volumes that are great enough to actually make sure that we can take advantage of that,” he said.