Massachusetts must increase entrepreneurship among people of color to help counteract a years-long decline in the number of new startups launching annually, and achieving that goal will require expanding support for minority-owned businesses, a new report concluded.

Between 2005 and 2018, fueled by industry consolidation, the number of new Bay State companies with employees formed every year dropped by 47 percent, MassINC and the Coalition for an Equitable Economy wrote in a report published Tuesday.

Minority-owned business numbers are growing, which MassINC research director Ben Forman said is a "promising sign" for the entrepreneurship outlook, but white residents remain about 2.5 times more likely to own a business than Black residents.

"The growth in business ownership among people of color was very strong over the last decade in Massachusetts, but we're building from a very small base, so even though we saw this very significant growth, it didn't close the gaps," Forman said while presenting the report during a virtual panel discussion. 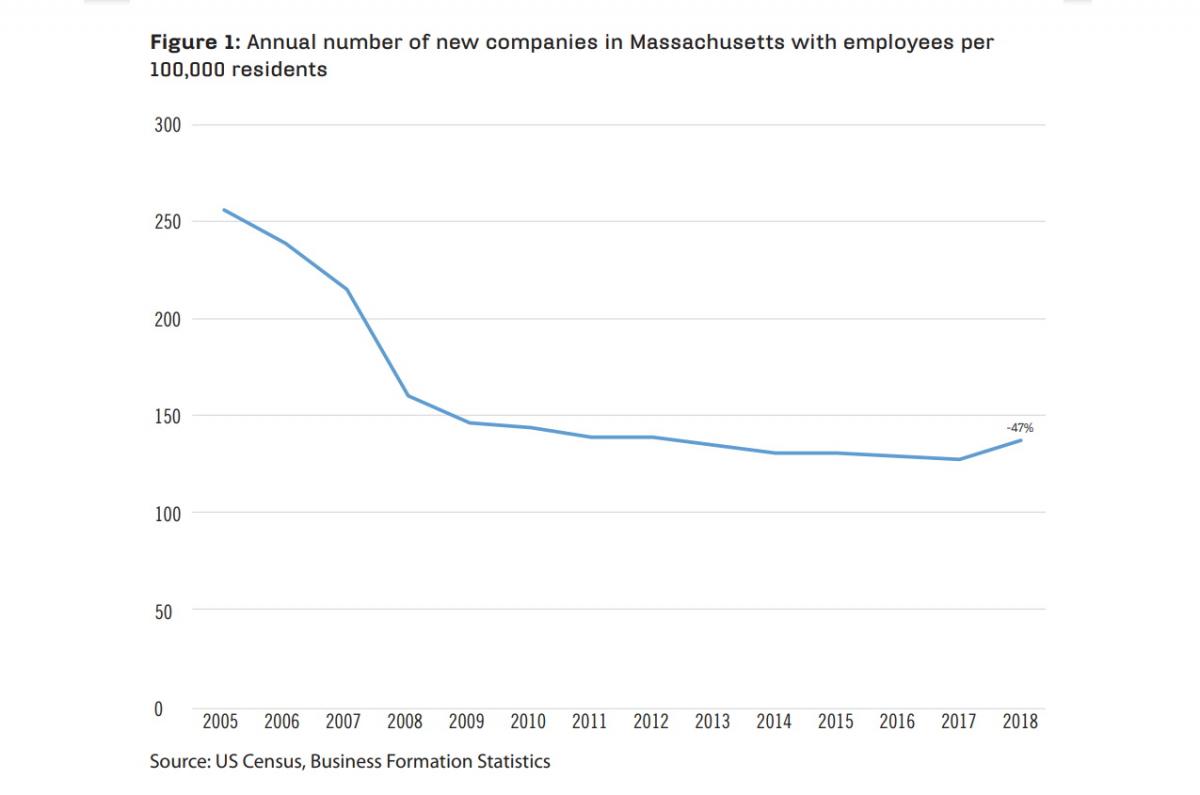 The report laid out strategies for closing those gaps and helping generate more equitable economic growth.

Another major issue raised by both authors and small business owners who participated in Tuesday's discussion is access to capital. Entrepreneurs of color, they said, face greater obstacles getting bank loans or knowing about other funding opportunities.

"In our communities, when we think about what the diverse capital resources are, we're talking about banking institutions, where we sometimes lack relationships or even a history of building credit," said Nia Grace, owner and operator of Darryl's Corner Bar & Kitchen in Boston and co-founder of the Boston Black Hospitality Coalition. "Then we think about venture capitalists. That could be a way to get some investor dollars, but if you're not in the same educational or social circles, you may not have access to the people that are the venture capitalists, so that becomes another hindrance or blockade."

The third pillar MassINC and the Coalition for an Equitable Economy noted is access to markets and customers, writing in the report that public procurement programs aimed at directing state or municipal dollars to minority-owned businesses are often flawed and ineffective.

Housing and Economic Development Secretary Mike Kennealy said the Baker administration has shaped its pandemic response in part to mitigate the disproportionate economic impact that entrepreneurs of color have felt.

The administration has delivered more than $650 million so far in small business support, about $213 million of which has gone to minority-owned businesses through the end of March, Kennealy said.

"We've done a lot over the past year, but there's more to do," Kennealy said.

Two months after that report, Baker proposed a reorganization plan elevating the Supplier Diversity Office to be a separate agency under the Executive Office of Administration and Finance. The change, which took effect in January, granted the office new tools such as a state spending audit function and gave it a more active role engaging minority-owned businesses in public procurements.

Sen. Eric Lesser, who co-chairs the Legislature's Economic Development Committee, and Rep. Antonio Cabral said a bill they filed (SD 2387 / HD 4004) addresses some of the issues raised in the MassINC report.

Their legislation would require more robust data reporting on state funding for and procurement efforts involving minority-owned businesses, establish a new grant program aimed at creating or strengthening business districts in communities of color, and analyze lending data for minority borrowers, according to a summary from Lesser's office.

"The report that's been presented today and the findings of that report give us a blueprint for moving forward," Lesser said. "We can close these gaps if we make intentional and ambitious policy and commitments to actually closing them."