Earlier this month, a heartwarming moment between a resident and her caretaker at Standish Village Assisted Living home in Lower Mills went viral, hopping the pond and making the rounds in a community in England.

A video posted to social media shows Dorothy Stein, an 89-year-old resident at Standish Village who has dementia, joyfully singing along to “The Blaydon Races,” a song she sang in her youth while growing up in Newcastle upon Tyne.

The moment was made possible by Dorothy’s caretaker, Maisie Miller, who had on a whim appealed to a Newcastle-based Facebook group for suggestions for songs Dorothy might know.

The 24-year-old Miller said she felt an immediate connection to Dorothy after joining the staff at Standish Village’s COMPASS Memory Support Neighborhood eight months ago, finding common ground in their mutual love of music.

“She loves music the same as I do, so deeply, and she responds in such an animated way,” said Miller, a Brighton resident.

“I was familiar with most of the music she loved — Broadway, Julie Andrews— but I also knew Dorothy is from Newcastle and was looking for ways to connect with that part of her. I went to Facebook and found this group in Newcastle and put out a request not knowing if I would get a response.

“The feedback I got was amazing,” Miller said, “and the song most recommended was “Blaydon Races,” a well-known tune sung in the stands as a sort of fight song at Newcastle United matches.”

As Dorothy heard the song being sung, Miller said, her reaction was incredibly strong and passionate.

“She immediately lit up and became emotional, her eyes welled up, she looked so moved...I knew she was connecting deeply, she was exclaiming that she hadn’t heard it in a long time, and it was a response I hadn’t really seen in someone.”

Dorothy’s daughter, Anne, said it was “wonderful” to see her mother react so joyfully and be reminded of a different time.

“She has been in the states since 1967, and has gone back to visit a couple times. … but it’s something we haven’t tapped into in many, many years. To see her singing and being just so elated, I was like, ‘Wow, that’s been buried under there for so many years.’ It brought me so much pleasure to see her so happy.” 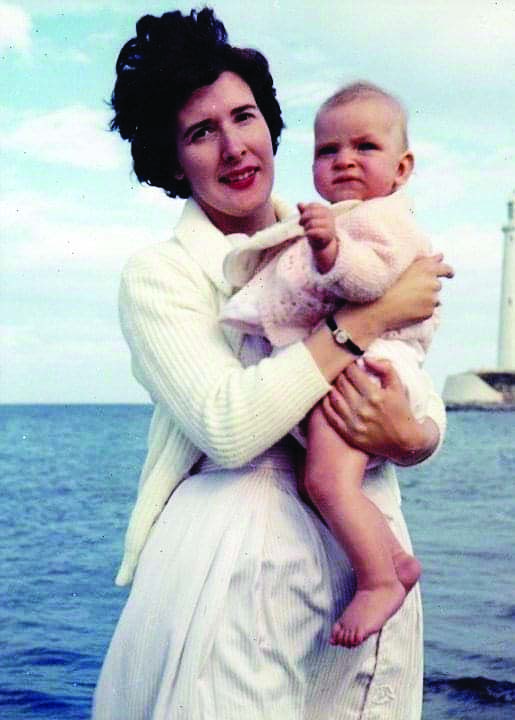 Dorothy holding her daughter Louise back in the day.

In her memory-care training, Miller noted how all people, including dementia patients, benefit from music therapy treatment.

“As we age, we lose a lot on the left side of the brain — like language comprehension. For the most part, recollections are still there, they’re just hard to find...Music is the key, and not just for people with dementia. In 95 percent of cases, people with dementia retain music, poetry, and prayer, the things centered on the right side of our brain.

“It’s a blessing; music in particular is the language of the soul, it’s a language everybody speaks, and we have it forever...We all can feel the power of music and getting to witness Dorothy have that sense of herself and home reminds us all of the power of music.

“For me, it’s one of the most important elements of life, it’s honestly something spiritual.”

Since surfacing on Facebook and Twitter, the video has inspired stories by several English news outlets, including the BBC, that interviewed Miller and Anne Stein last week. Initially, Stein said, she was wary about exposing her mother in her current mental state.

“My sister and I had talked because we loved the video, but we were getting a little nervous if we wanted to show Mom like this. But this is real life, we’re living in the real world, and this is what happens. Even though my mom has dementia, there are some beautiful moments that come out of that...now her joy has gone out into the world and affected so many other people...it’s the gift that just keeps on giving.

“Who would have thought that my mother in this point in her life would have been a catalyst for all this good will? It’s a really magnificent thing to come out of a particularly terrible year and a devastating and heart-wrenching condition.”

Stein, a Dorchester resident, praised the staff at Standish Village for going above and beyond in their efforts to make Dorothy and other residents feel welcome and at home.

“When my parents moved they were living together, but my father couldn’t care for my mother...She was moved into memory care; it was a grueling, difficult decision but it had to be done.

“I had a lot of fear about the kind of care she was going to be getting, but the people in the COMPASS Memory Care program acknowledge every person who lives there, and the things they are interested in...My greatest fears about caring for my mom have been put aside because I know she is with people who respect her and take good care of her. I couldn’t speak more highly of the place.”

For Miller’s part, she said experiences like the one she shared with Dorothy are her favorite time of her daily routine at work, where she tries to emulate the example set by the staff around her.

“It’s a great place to work,” she said. “Everyone I’ve met there are my role models, I have so much to learn from them. The staff they attract, everyone is so amazing, and they’re frontline workers, many are immigrant single mothers, so they’ve witnessed the worst of Covid.

“This community has been suffering, but we still have so much joy and so many awesome moments throughout the day. It’s been hard... but focusing on the good is what they’re good at.”