The cover of a special supplement to the Dorchester Reporter, which will circulate with the weekly edition this week. The banner of the supplement is an update to Walsh's original bumper sticker used in his first campaign for state representative in 1996/97.

What should Americans expect from their new Secretary of Labor? Funny you should ask.

The Dorchester Reporter has been writing about, observing, and scrutinizing Mayor Martin Walsh— now US Secretary of Labor Martin Walsh— since 1996, when the 29-year-old union laborer, Little League coach, and civic activist launched his first campaign for state representative.

No other news organization has devoted more hours, ink, and keystrokes to chronicling his career in public life. Many of the highlights from those years of coverage are included in a special supplement in this week's Reporter, which is presented in the main as a look-back, not as a look-ahead. But this deep dive into our archives reveals much about the man and the politician who will now — upon swearing an oath in Washington, D.C.— be 11th in the line of succession to the US presidency.

In 2014, when he was inaugurated for his first term as Boston’s mayor, we shared some of our thoughts about the “kid” from Dorchester who we’d been keeping tabs on since he was a baby-faced civic president in Columbia-Savin Hill in the mid-1990s. Much of what we published then is true today, so it bears repeating and expanding upon.

We wrote back then: “For folks from Dorchester, he is now the vessel of their own aspirations: the kid from the three-decker on Taft Street who has beaten cancer, a drive-by bullet blast, and ‘the disease’ to grasp his city’s ultimate brass ring. Marty has become living, breathing proof that we can tame our own demons and even harness them for the purposes of a greater good— like ministering to an emerging generation of Bostonians whose futures are similarly imperiled by bullets and booze.”

Walsh’s mayoral record is imperfect and incomplete— and one that will be more fully plumbed in the coming weeks in our pages— but as he lets loose his grip on City Hall, Marty leaves behind a weary Boston that has been battered by pandemic and bruised by the related economic fallout. And yet, his has been a sure and steady hand during a time of unprecedented crisis. And until Covid hit, his seven years in office were marked by remarkable growth and relative peace and prosperity.

In an era marred by the most depraved and degrading presidency in US history, he has led this city with compassion, empathy, and the good nature that made him a compelling candidate in the first place. He has acquitted himself well.

So, what else does Joe Biden see in the mayor of Boston? What makes him tick? There’s no better person to ask then Marty’s mentor and his earliest political conscience, Danny Ryan— known around the ‘hood as “Budso from 13-10.”

“Marty chose people over power, and by empowering other people, he empowered himself,” Ryan once told me. “He’s addicted to helping people.”

That virtue is at once his best quality and, potentially, his biggest liability, one that his opponents have tried, but largely failed, to exploit. He aims to please, to leave everyone smiling, to defuse confrontation and focus on the things people have in common. But that doesn’t make him a pushover, either. He can, and does, say no every day — and not just to drink, a vice he dropped in his mid-twenties but battles against relentlessly to this day.

Marty’s roots are in a hard-scrabble corner of rural Ireland called Connemara, a rocky and unforgiving landscape that has flung more than its share of migrants to Boston’s neighborhoods. That deep sense of the immigrant experience (Gaelic was the language of choice in Mary and John Walsh’s home) was formative for the man who would one day proclaim that immigrants facing threats of deportation could find shelter in his City Hall offices. 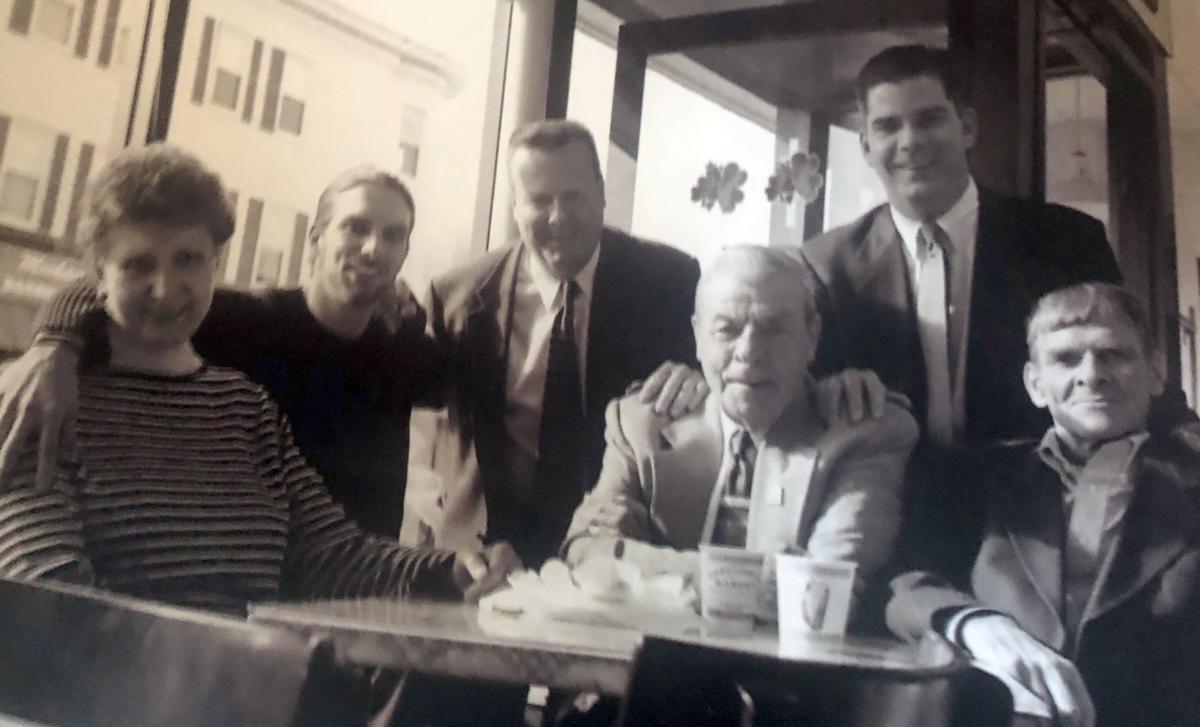 In 2000, when Rep. Martin J. Walsh was still a back-bencher in the state Legislature, he and his family were featured in World of Hibernia, a now-defunct magazine that focused on the Irish diaspora. The story, titled “A Legacy of Labor: The Walsh Family of Dorchester,” was written by former Dorchester Reporter editor Eoin Cannon, who would go on to become a speechwriter for Mayor Walsh. It was accompanied by this photo of the clan gathered around a table at Greenhills Irish Bakery in Adams Village. Shown, from left: The mayor’s mom Mary (O’Malley) Walsh, his brother, John Walsh, his cousin, Marty Walsh, his uncle Pat Walsh, then-Rep. Walsh, and his father, John Walsh.

His dad John was obsessed with two Boston blood sports: ice hockey and politics. His son Martin caught the electoral bug early and became a volunteer for the city’s most powerful political force of his generation, Bill Bulger, whose wife Mary also has Connemara roots. He pitched in to help Jim Brett’s campaign for mayor in 1993 and he butted heads frequently after with the ultimate winner that year, Tom Menino.

What he didn’t learn from his dad, Marty gleaned from his uncle, Pat Walsh, who ran the Laborer’s Local 223— known in most circles as the “Irish local.” Generations of mainly Irish workingmen were card-carrying members within days or even hours of stepping off the Aer Lingus flight from Shannon or Dublin. The nation’s new Labor Secretary has been a dues-paying member of 223 since June 30, 1988. A few months after his 21st birthday, he put on a hard hat and started working at a construction job at Commonwealth Pier on the city’s waterfront.

The union and its affiliates have been his natural base throughout his career— even, and particularly, when his political judgments failed him. As disciplined as he is in his personal life, Marty did, at times, seem to flail about politically. In the Legislature, he backed the wrong horse in two House leadership fights, and his influence waned inside the building as a result. In 2002, he came this-close to leaving the House to take a low-profile appointment as Suffolk County Registrar Register of Deeds, hardly a job to be coveted by a politician with higher aspirations.

But within days of making that news public, he hit the brakes and ran for re-election.

"I've sat in the House chamber looking around, and this job is the best job I've ever had and for as long as the people of Dorchester will have me, or until I decide to move on, this will be the best job for me," he told the Reporter at the time.

More often than not, this paper tracked Marty’s career with routine reports about bills filed, bridges built, and campaigns won. He showed guts on many occasions and defied expectations on others. He crossed an unhappy civic association crowd that wanted to block the Pine Street Inn from converting a dilapidated six-family house on Pleasant Street into transitional housing for the homeless. In the fight over building dorms on the UMass Boston campus, he defied his fellow union chieftains and stood alongside his Savin Hill neighbors in opposing dorms. And well before the Supreme Judicial Court’s Goodridge decision, he would tell anyone who cared to listen that he’d happily vote to give gay men and women the right to marry.

"If you want to label me a liberal because I'm supportive of people who are trying to get sober and trying to recover, and trying to stop infectious diseases, they can label me as a liberal all day if they want," Marty told former Reporter news editor Jim O’Sullivan in a 2004 profile.

In 2008, another profile by O’Sullivan for the State House News Service portrayed Walsh as the “go-to” man for the state’s labor interests, but also for people across Boston and beyond struggling with substance abuse. He recounted a speech that Marty gave that year to persuade his colleagues to fund more beds for detox.

“The chamber hushed for his emotional account of the one time in his House career when he'd missed a phone call from a constituent looking for a detox bed. ‘I missed that phone call and I called the person back who called me, and I left a message for them,’ Walsh told his silent colleagues. ‘On the Monday morning, a call came to my office to let me know that they no longer needed my services because the young man that they were calling for had passed away of a heroin overdose. This is real-life stuff,’ he said.”

As he worked to advance his agenda on Beacon Hill, Marty’s dual-track career as a union leader became more prominent in 2010 when he took the top position at the Boston Building Trades Council; it was a move that further cemented his influence on the region’s labor movement and positioned him well for the next step: a run for mayor, the job he always wanted.

This week, he leaves all that behind for a new job, one that a young Marty Walsh and his parents could scarcely have imagined possible. But, as Marty himself said back in 2010: “One thing you learn in politics is you just don't know what's going to happen. Politics is funny. It's like recovery: a day at a time."

Bill Forry is the editor and publisher of the Reporter.