The Indigo Block, a linchpin re-development project along the Fairmount Line in Uphams Corner, will be completed this summer, according to the Dorchester Bay Economic Development Corporation, which has been leading the effort to revitalize the site for much of the last decade.
Construction on the estimated $50 million project along East Cottage Street began in earnest in December 2019, but was interrupted by the Covid-19 construction moratorium. Work resumed last May and it’s estimated it will be completed this August.

The project includes a mix of 80 residential units – 44 of them designated affordable – along with roughly 20,000 square feet of industrial commercial space. The main building features a connection to the Uphams Corner MBTA train platform to promote the use of public transportation and an accessible playground for wider community use. The Block plans to limit the environmental impact of traffic at its commercial area by catering to local businesses.

The project is a collaboration between Boston Capital, Escazù Development, and Dorchester Bay EDC, which was awarded the right to re-develop the old Maxwell Box Company warehouse site following a competitive bid process in 2015.

Escazù Development is focused on building out the project’s nine condominiums, all market-rate units housed in a single building. The condo complex offers split-level units as well as two-bedroom flats. While the pandemic interrupted supply chains, Escazù founder My Lam told the Reporter on Monday that the end is finally in sight.

“Throughout the process, the community wanted a balance in income accessibility, and the market rate homeownership component was important to reflect that interest,” Lam said. “When the pandemic came, the construction team here reached out to all the suppliers and luckily we’re now at a stage where we don’t deal with the reverberations of that major disruption any longer.”

North East Interiors (NEI) is the project’s general contractor at the site, which draws anywhere from 30 to 40 workers each day. As work has drawn to a close, said Ken Calder, a supervisor at NEI, the number of men on site has begun to dwindle.

But, he cautioned, a lot of work to be done. As NEI is finishing installing kitchen countertops and flooring, National Grid and Eversource have begun work on gas lines and electrical power lines. The Boston Water and Sewer Commission is responsible for bringing plumbing to the Block.
Said Beth O’Donnell, Dorchester Bay EDC’s real estate director, who has been helping to guide the project for the last seven years, “If you spend time strengthening the relationships that are involved in this project, when you encounter difficulties along the way, everyone knows and trusts each other and works together to get through it.”

She added: “It’s the partnerships that engender the trust. That’s why we’ve been successful.” 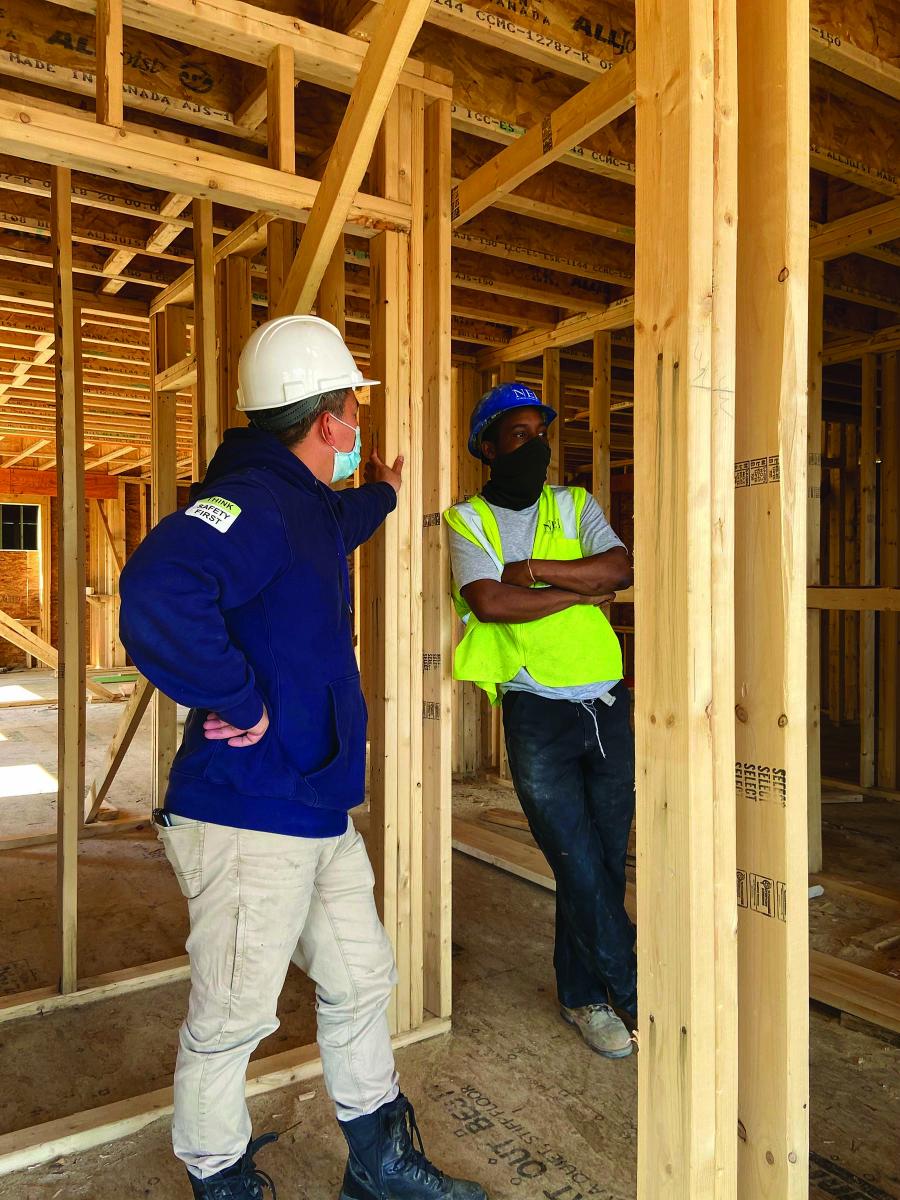 Also critical to Indigo Block’s progress: funding from the state and from the federal Low-Income Housing Tax Credit program, or LIHTC, which enables developers to focus on optimizing transit and climate-oriented priorities.

“You have to be opportunistic, because they aren’t making any more land,” said O’Donnell. “There are thousands and thousands of people along this corridor connected by this rail line that’s been slow to achieve its potential. The history of the Fairmount Line is one of lack of service, but the MBTA has been working very hard to increase frequency of service and open new stops, and we’re making our site more accessible to the community as well.”

Boston’s Inclusionary Development Policy (IDP) required that Indigo Block designate 13 percent of its units as “affordable.” The developers have exceeded that threshold substantively: More than 50 percent of the units are targeted at Dorchester residents making 60 percent or less of area median income. The building also houses 36 workforce units, designated as “affordable” for residents making between 60-90 percent of the area median income.

The affordable units feature the same fixtures as workforce and luxury units, including granite countertops, tiled bathrooms, and appliance packages, and are scattered throughout the building to avoid external indicators of each unit’s affordability level.

Perry Newman, the CEO at Dorchester Bay EDC, told the Reporter that input from neighborhood meetings helped drive the mission for more affordability. “Time and again, developers find that what is defined as affordable isn’t necessarily real-life affordable for the community in which we reside,” he said.

He added that the Indigo Block will seek a third-party rating recognizing the development as a highly sustainable design. Elements like the building’s white roof-tops, air-tight vapor barrier, energy-efficient insulation, and rain gardens, which aid in storm-water filtration, will help advance that designation.

The development has been helped along by a $100,000 grant from the Kresge Foundation meant to advance sustainable policy solutions in low-income communities. Dorchester Bay EDC and its partners in the Fairmount Indigo CDC Collaborative won the award in September 2019.

Areas along Dorchester Avenue and Columbia Road rank among some of the hottest spots in the city, according to a 2019 Museum of Science/Northeastern University heat map, and the occurrence rate of asthma in children under five has historically been higher in Dorchester than the average for the city of Boston.

“We want to improve the air quality, improve conservation and improve health outcomes in our area to the extent that our buildings can contribute to healthier environments,” Newman said.

Applications for leases at the Indigo Block site are expected to be available to the public sometime in August.