Artists worked their magic last Saturday afternoon at a “Graffiti in Grove Hall” event across the street from the Grove Hall library. Daniel Sheehan photo

Several dozen people gathered in Grove Hall last Saturday afternoon to watch as a team of local graffiti writers showcased their skills, transforming a concrete wall into an explosion of color.

The event, dubbed Graffiti in Grove Hall, was organized by Jeremy Harrison — a local artist known as “Sobek”— as part of his “Back Against the Wall” initiative aimed at promoting more legal graffiti and street art in Boston’s neighborhoods. Over the blare of music and the hiss of spray paint cans, Harrison spoke to the importance of preserving the artform and recognizing its place as the literary forebearer of street art.

“The goal is to promote the writing culture of graffiti,” said Harrison of the event. “Graffiti is the federal term bestowed upon us when it became illegal, but we’re known as writers, so this was like the first event to kind of start that conversation. I wanted to make it as hands-on and community-involved as possible, and the community showed up and they’re doing it.”

At a lot on Geneva Avenue just across from the Grove Hall BPL branch, attendees were invited to test their own graffiti skills on plywood and concrete barriers while experienced artists with years in the Boston scene gradually brought their designs to life on a wall donated by Moses Auto Body shop to be a canvas for the event. Within the group of artists, which stretched across an age range of some 40 years, one could see the history of graffiti in the city and how the tradition has been organically passed down through the generations, said Harrison, gesturing at each artist working along the wall.

“A lot of these older guys have been my mentors at Artists for Humanity— Rob Gibbs, Richard Gomez— they’ve been my mentors since ‘97. And Barrington, he was their mentor, the guys who taught me. That was my main goal, to have multiple generations up there, let the young kids know that the old schoolers are still here and they’re still strong.”

Highlighting that line between the old and the new could inspire younger generations to keep the artform alive and bring it more clearly into the public eye, Harrison reasoned. His calls for graffiti to be spotlighted come at a time when city-sanctioned street art is popping up on surfaces across Boston: in recent years, murals have surfaced on Blue Hill Avenue, Quincy Street, Dorchester Avenue, and elsewhere in the neighborhood and others. But Harrison is worried the “writers” could be left behind.

“It’s growing, but we’re being left out of the movement,” he explained. “Right now, Massachusetts and specifically Boston is absolutely booming with the street art movement. There’s crazy amounts of money going around, and I think it’s absolutely amazing but it’s important for the graffiti writers specifically born and raised in these neighborhoods to have a say in what art goes up and also have first dibs for these proposals. That’s the long-term mission, but this is the start of a larger conversation. It’s time to shake it up.” 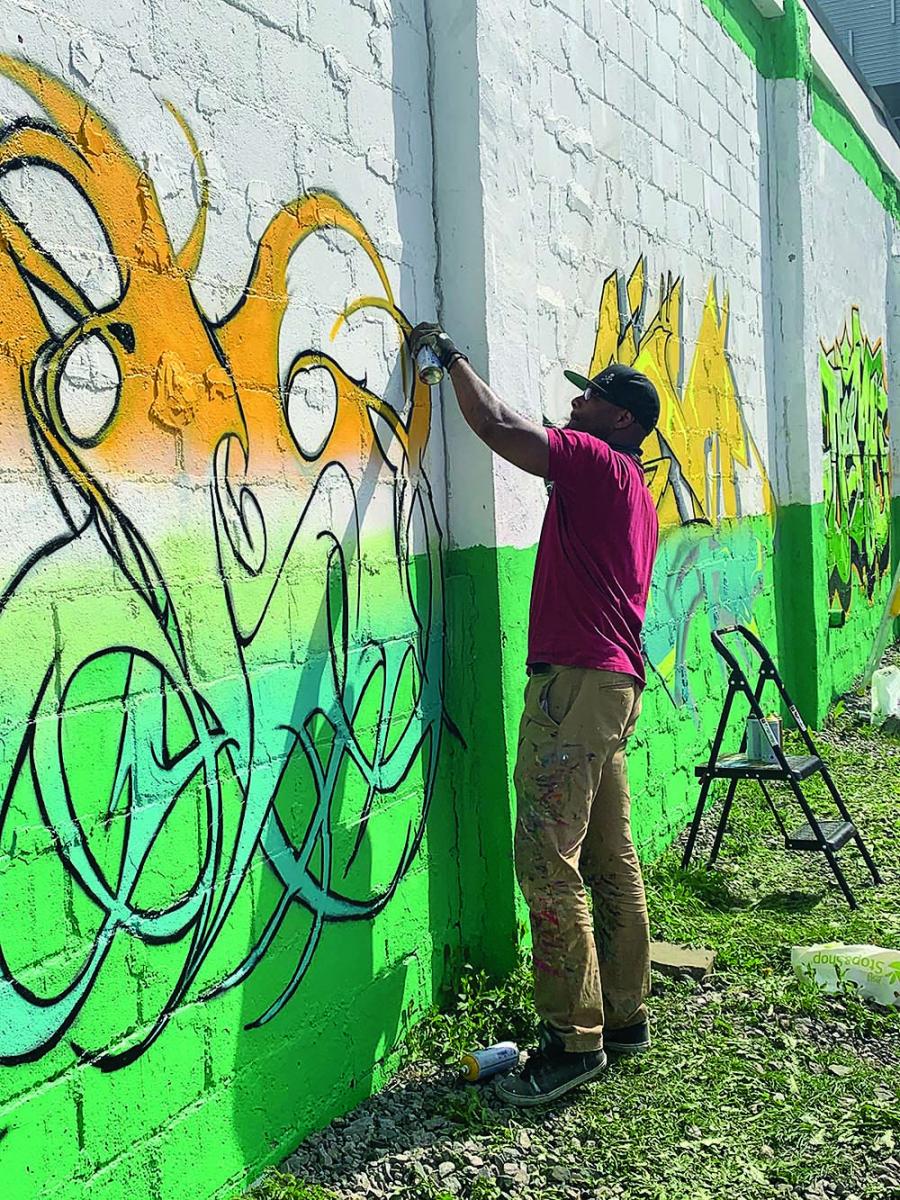 Apeks, a Roxbury-based graffiti writer, was among the featured artists allotted a section of the auto body shop wall for the event. Daniel Sheehan photo

Sharing in Harrison’s hopes for a more colorful future Boston painted by local artists is Ekua Holmes, a Roxbury native and director of MassArt’s sparc! The ArtMobile initiative that brings art-making workshops to locations around the city, fostering creation at the “grassroots level.” The ArtMobile helped make Saturday’s event possible by donating hundreds of cans of spray paint, placing tools of creation in the hands of the next generation of artists. Events like this are key to building pathways for kids from Dorchester to find their way to MassArt, she explained.

“We wanted to support this event because we have the same vision that Jeremy has had for several years,” said Holmes. “That this could be a park that welcomes community artists and young folks, and we’re hoping to inspire people to come out and self-express in the space. It’s right in the heart of the neighborhood, there’s lots of room for everyone, lots of wonderful creative and collaborative things can happen here...this is the generation that’s got the vision for the next 50 years, so supporting, shining a light on, and listening to what they have to say and looking at their work is the way forward.”

Rob “ProBlak” Gibbs, one of the foremost graffiti and street artists to emerge from Boston in the last 40 years, was on hand at the event, armed with a spray paint bottle. In between taking breaks to chat with friends and family, Gibbs underscored how the event to him was equal parts preservation and celebration--and called for more like it to follow.

“It’s beyond important, and it needs to continue,” said Gibbs. “It’s our tradition, our legacy. It’s the culture’s alphabet.”