Known for his signature heart designs, the Dorchester-based artist Franklin Marval is showing a collection of his work centered around themes of community and diversity at Boston City Hall through October 15.

“I get inspired by people a lot, people who are doing things not just for themselves, but that are working for others,” said Marval, who works out of the Humphreys Street Studios at Uphams Corner.

The collection, called “Street Heart,” features 10 pieces that Marval has worked on since he first started making his heart designs. Located in City Hall’s eighth floor gallery, the artworks’ vibrant colors and graphic designs reflect one message in particular that Marval is focused on channeling: “More love is okay.”

Since 2018, he has incorporated colorful and graphic hearts into his pieces, imbuing that message, which, Marval said, he reminds himself of every day.

“I see it everywhere, even when I go to a retail store or a convenience store around the neighborhood; you see a lot of people doing good things,” Marval said. “I’m not sure if it’s because I decided to focus on the good that I see it everywhere.” 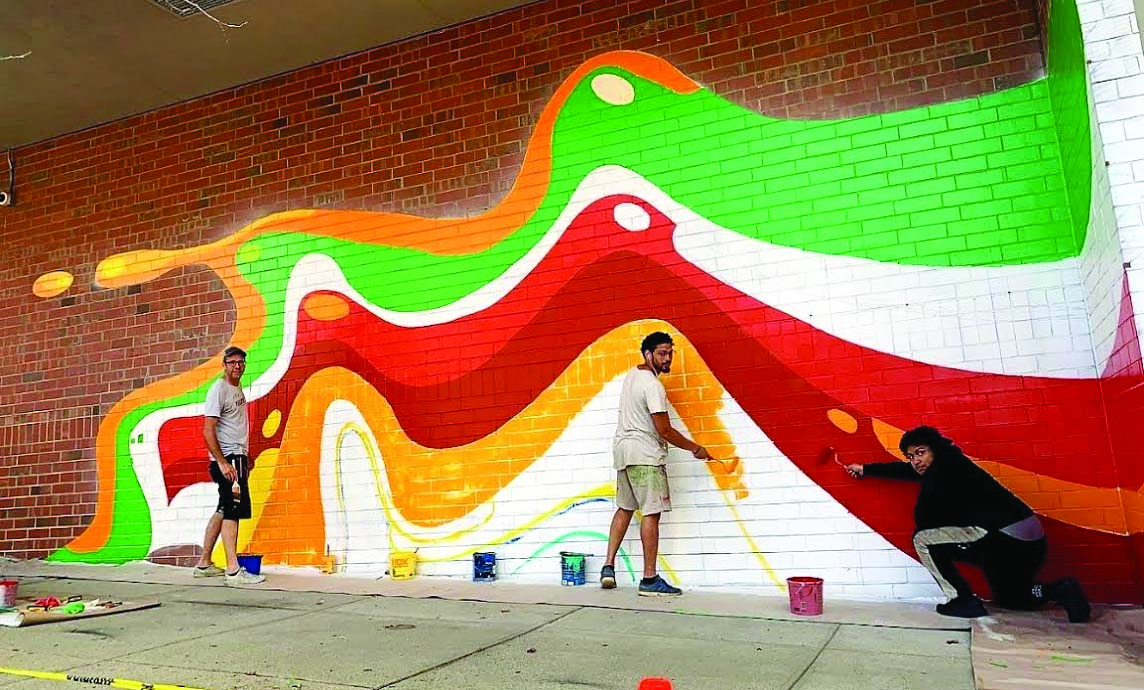 Marval even sees good in the street signs stationed across Boston, the inspiration for one of his latest pieces called “In the color blind mode” that is part of the exhibit. Inspired by a crossing sign for pedestrians, he created his own and topped it with multicolored strings trailing behind it, representing movement.

The piece is meant to inspire individuals to walk through life as “a person moving forward with love, without seeing labels or the colors of skin,” he said.

The exhibit will also display an acrylic and wood art piece that reimagines the Kenmore Square Citgo sign. Instead of the big red triangle that towers above the city, Marval swapped the triangle out for a large red heart.

He first proposed this idea in 2018, when the city of Boston proposed designating the sign as an official landmark. Marval was against the idea because of what the sign represents to him: a profitable gas company with ties to Venezuela, Marval’s home country where, he said, the people don’t experience the financial prosperity that the sign may imply to many.

“It’s not that I want to change the sign, it’s that I want something better,” he said. “Every time we create something, let’s make sure it is something that is better for the people and the world.”

Marval said his focus on spreading positive messages through his artwork can be traced back to the 2013 Boston Marathon.

“When something that bad happens, you can get lost really easily, and I decided that that was not okay, and at that moment, I decided to focus on the things that are okay.”

He started out by creating small stickers with the message and heart symbols, and little by little, the hearts started to grow.

Marval said everything he creates now includes a heart meant to be symbolic of community. Many of his projects are designed with communities in mind.

At Charlestown High School recently, he was asked to paint a mural for the entrance as the school transitions to opening its doors to middle schoolers.

Layered beneath the mural’s rainbow waves, the artists’ signature hearts can be found, representative of the hearts of the school’s teachers, staff, and students. As the wave designs make their way from the walls of the school’s building to the pavement, the mural morphs into a colorful game of hopscotch.

“This was the first time these kids were going to the building, just by having that good impression of the building, they’re going to feel good,” Marval said. He later heard from the school’s principal that students have dubbed the mural “the bubble entrance.”

Johan Quintero, 28 and one of Marval’s students, was a part of the six-person team that painted the mural. He said that while he was working on the art piece, he could see how it had already impacted the surrounding community.

“People think it’s just the wall, but then you see the hopscotch,” he said. “The kids love that, and you see that on their faces.”