Ed “Edzo” Kelly, a son of Dorchester with deep roots in both the local and national firefighting community, ascended to the highest fire union position in North America earlier this month when he was elected general president of the International Association of Fire Fighters. He had previously served as general secretary-treasurer of the group.

In an interview with the Reporter, Kelly, who will officially assume office on April 9, said he is excited about his new responsibilities while feeling some wariness about the obligations that come with the new title.

“It’s an honor to be elected to represent such brave men and women who do such a special, noble calling for the citizens we swore to protect,” he said. “Certainly, I was honored by the trust bestowed upon me by the membership; but there’s also an awesome responsibility that comes with the position, and I certainly felt the weight of that immediately.”

Kelly explained that his work as general president will expand in scope beyond what his previous position entailed, and shift him more into the public eye.

“In my role as general secretary-treasurer, it was more inward-facing, if you will, and my responsibility revolved more along the lines of ensuring that the day-to-day operations of the IFF were being met. The role that I’ll be assuming April 9 as general president is more about service delivery. It’s about being more directly involved in the daily lives of the 325,000 firefighters and paramedics throughout North America, and their safety, their working conditions.

“So, I’m very excited about that,” he said, “and it’s something I take great pride in and something that motivates me immensely given the risk and sacrifice that comes with the profession.”

While Kelly’s office will be located in Washington, he said he’ll be on the move quite a bit: “We represent all of the United States and Canada, so it puts us in a spot where we do a significant amount of traveling.”

But he plans to still maintain a close connection with his home neighborhood, as he has in recent years by doing such things as chief marshal in the Dorchester Day Parade in 2019. Reflecting on his time growing up in Dot, Kelly credited the community with molding him for life in the larger world.

“Being from Dorchester shaped who I am today, taught me to be loyal to my friends, muster courage in the face of adversity, and do the right thing,” he said. 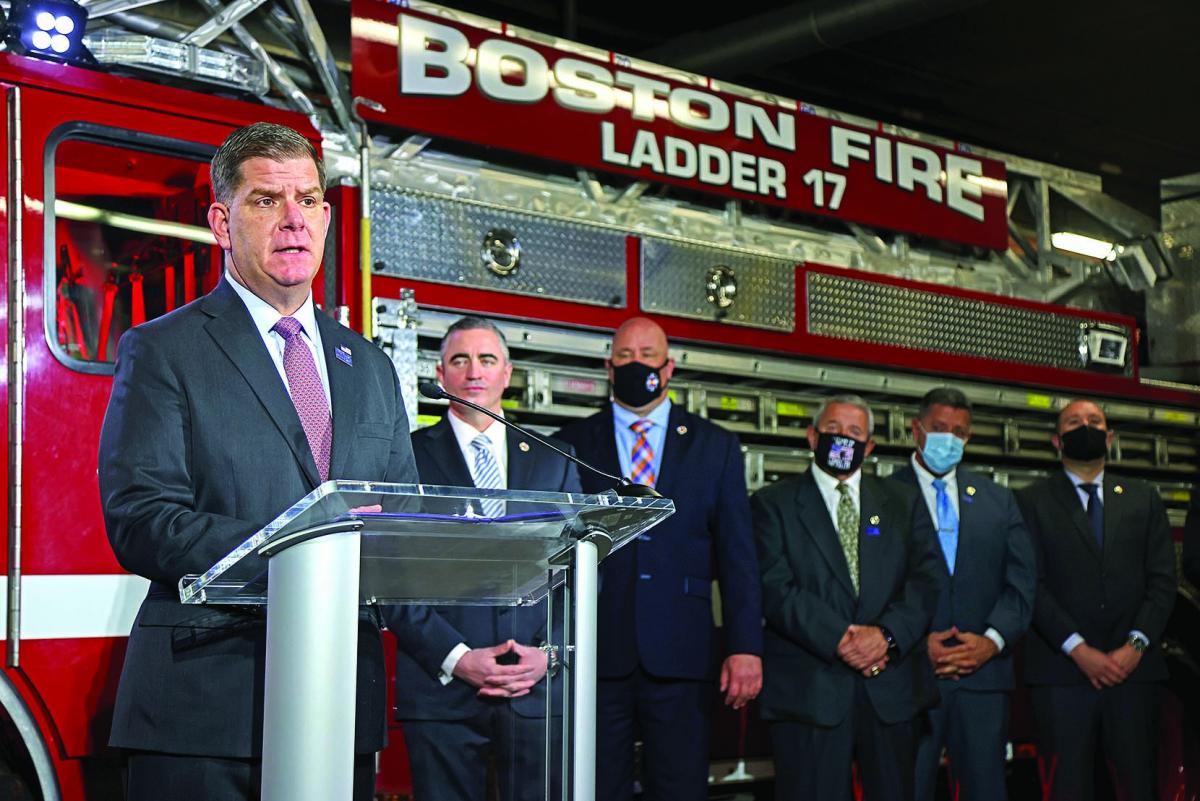 Ed “Edzo” Kelly, shown to the right of Mayor Walsh during a press conference in 2019, has been elected general president of the International Association of Fire Fighters, which represents 325,000 firefighters and paramedics throughout North America. Photo courtesy Firefighters Union Local 718

Noting how the neighborhood seems to breed leaders – ”A lot of leadership comes out of Dorchester, I think, because of how we grew up” – he pointed to outgoing Mayor Martin Walsh and others who have continually moved into prominent positions.

“I couldn’t be prouder of Marty Walsh, who I’ve known going back decades and how his leadership has propelled him to the highest levels of government. In no small measure do I attribute his ability to lead from growing up on the streets of Dorchester,” said Kelly. “He’s done great things as a state rep from Dorchester, a labor leader, and as our mayor for working families like those living in Dorchester.”

He added that he would likely be interacting with Walsh’s office and others in the Department of Labor, and that he expects Walsh to work hard for the country’s firefighters.

“In his role as Secretary of Labor, he will take his Dorchester roots to Washington DC, and help rebuild our middle class in this country...he’s a staunch supporter of collective bargaining, which is something firefighters and paramedics throughout the US do not have the protection of, so I’m glad it’s something he will be a champion of.”

During his time in Boston, Kelly, who was born into a family of firefighters, served with Ladder 17 and eventually as president of Boston Fire Fighters Local 718 IAFF, representing 1,600 uniformed members and 1,000 active retirees of the Boston Fire Department. As general president of the IAFF, he’ll be in charge of three hundred times as many people.

He sees his firefighting heritage and connection to the lower ranks as advantages in his new leadership role. “I take great pride in the fact that I’m a rank-and-file firefighter. Having a rank-and-file firefighter serving as president, who still has his boots on the ground, will always ensure that the best interests of our membership that puts its life on the line every single day is always at the forefront of the mission of the IAFF.”

Kelly thanked his family and acknowledged the values that his community has instilled in him.

“I’m very lucky to have a family that supports me, including my wife Katie, my daughter Maggie, and my son Tommy. I’m blessed that my parents, Jack and Noreen, taught me how to be a good person. I’m lucky to have my executive assistant, and proud Dorchester girl, Corrine Griffin coming with me to D.C...I just ask everybody to pray for the firefighters.”