In a season disrupted by Covid-19, Dorchester Youth Hockey’s Under-12 Girls team has cause for celebration this week: They didn’t just play against all-boys and co-ed teams in the Boston Mayor’s Cup Youth Hockey Tournament last week; they won the whole thing.

The girls skated to a 3-1 victory over Hyde Park in the final game of the tournament last Friday night at Neponset’s Devine Rink. According to assistant coach Ed Gracia, it was the first time an all-girls team had ever won the Mayor’s Cup A Division in play against boys’ and co-ed squads.

The girls also defeated teams from South Boston and Parkway — both shutout victories— on the road to the final.

Three other teams from the Dorchester league also emerged as champions in the annual tournament for the Pee Wee, Bantam, and Midget levels.

Head coach and Dorchester Youth Hockey board member Peter O’Sullivan is thrilled with the result. “The girls hadn’t won the championship in the past, so it was a big deal for them, especially this year,” said O’Sullivan. “We had to cancel the Districts. We had to cancel the State Tournament. The Mayor’s Cup kind of became the tournament for us. They really put in a 100 percent effort.”

He added: “I’ve seen huge jumps in each girl over the course of the year. They’ve improved unbelievably, and it just culminated this week. It was a lot of fun.” 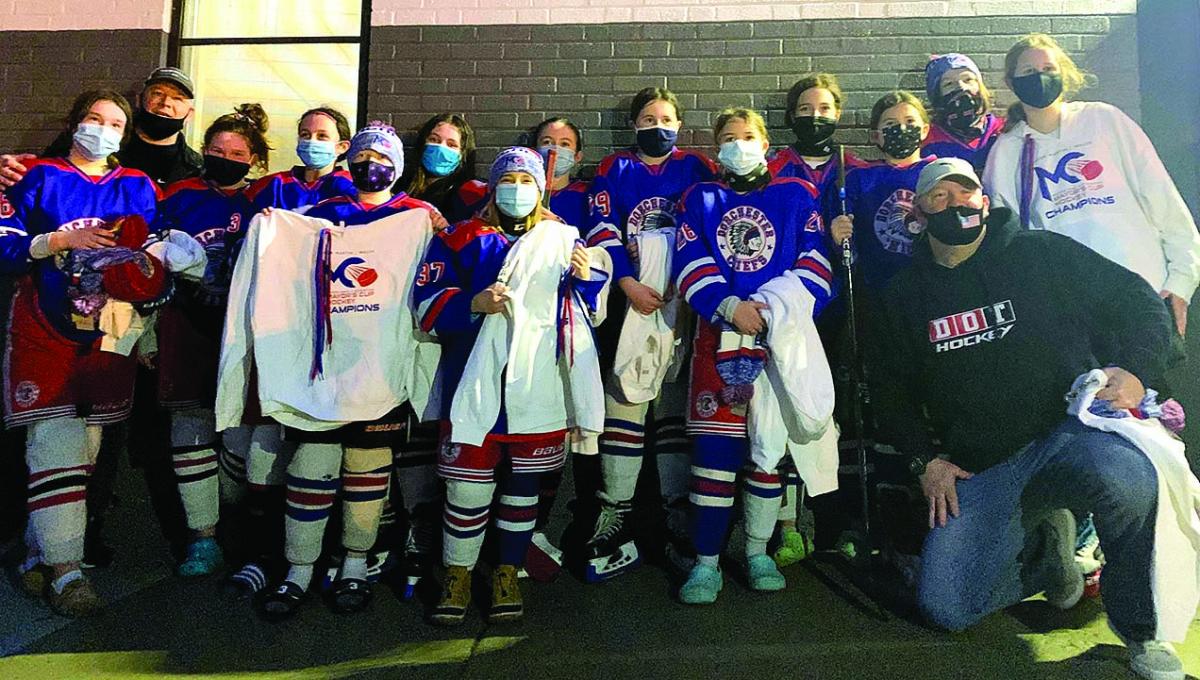 The Dorchester Youth Hockey Under-12 Girls team celebrated with their coaches outside the Devine Rink in Neponset last Friday night after they won the Mayor’s Cup tournament in their age bracket, defeating Hyde Park, 3-1. Photo by Noreen Kelley

In a year marked by disappointment, O’Sullivan and Gracia worked hard to create a positive environment.

“It has been a crazy year, especially for the kids ‘cause they’re not even in school,” said O’Sullivan. “Their lives have been sort of turned upside down. I know that they’re home a lot. They’re on the computer a lot. So my focus for them in coming to the rink was just to have fun. And I knew that if they were having fun, they’d mesh together as a group.”

According to O’Sullivan and Gracia, great team chemistry played a major role in their team’s victories.

“Obviously there’s a first line, a second line, and a third line, but there’s no finger pointing, it’s all unified,” O’Sullivan said. The team also benefitted from the stellar performance of goalie Maeve Pugsley, who let in only one goal during the three-game tournament.

“A lot of these girls started out in the Dorchester Youth Hockey ‘Learn to Play Hockey Program’ and now are winning the Mayor’s Cup together,” said Gracia. “Pretty extraordinary, if you ask me.”

“It’s a big deal to get that hoodie,” O’Sullivan said, laughing. “I’ve seen kids wearing them all week in the neighborhood. It’s hilarious.”

While his championship team blazed new trails last week, O’Sullivan, who coaches two boys’ teams in addition to the U-12 girls, insists that his female players are no different from their male competitors.

“I’ve heard coaches say, ‘You just lost to a girls’ team.’ And it’s kind of weird to me because I have a sister who plays. She played in the National League and at Providence College and was Rhode Island Player of the Year. She has done everything in hockey you can possibly do,” he said. “And she played with the boys growing up.

“I don’t look at girls and boys differently competing. The drive is the same. They’re kids. They want to go out, and they want to win, and they want to hear the coach say, ‘You did a good job.’ The kids don’t really say ‘Oh, we beat a boys’ team.’ It’s more like ‘We won.’ They’re just excited to win as a team.”

O’Sullivan and Gracia are passionate about continuing the neighborhood tradition. “These are all neighborhood kids that I coach, which is very special to me. I grew up here,” said O’Sullivan. “They’re the same as me. We all grew up in Dorchester and went through the same program and I love to give back. It’s something I look forward to doing every year. I don’t have kids, so it’s cool for me to have these 15 girls and their parents. You see the improvement in each of them, and it’s why we do this.”

As Dorchester Youth Hockey looks to expand its girls’ program next year, Gracia extends a welcome to all potential players.

For families interested in learning more about Dorchester Youth Hockey, the organization’s website, dorchesteryouthhockey.com, has all the information.