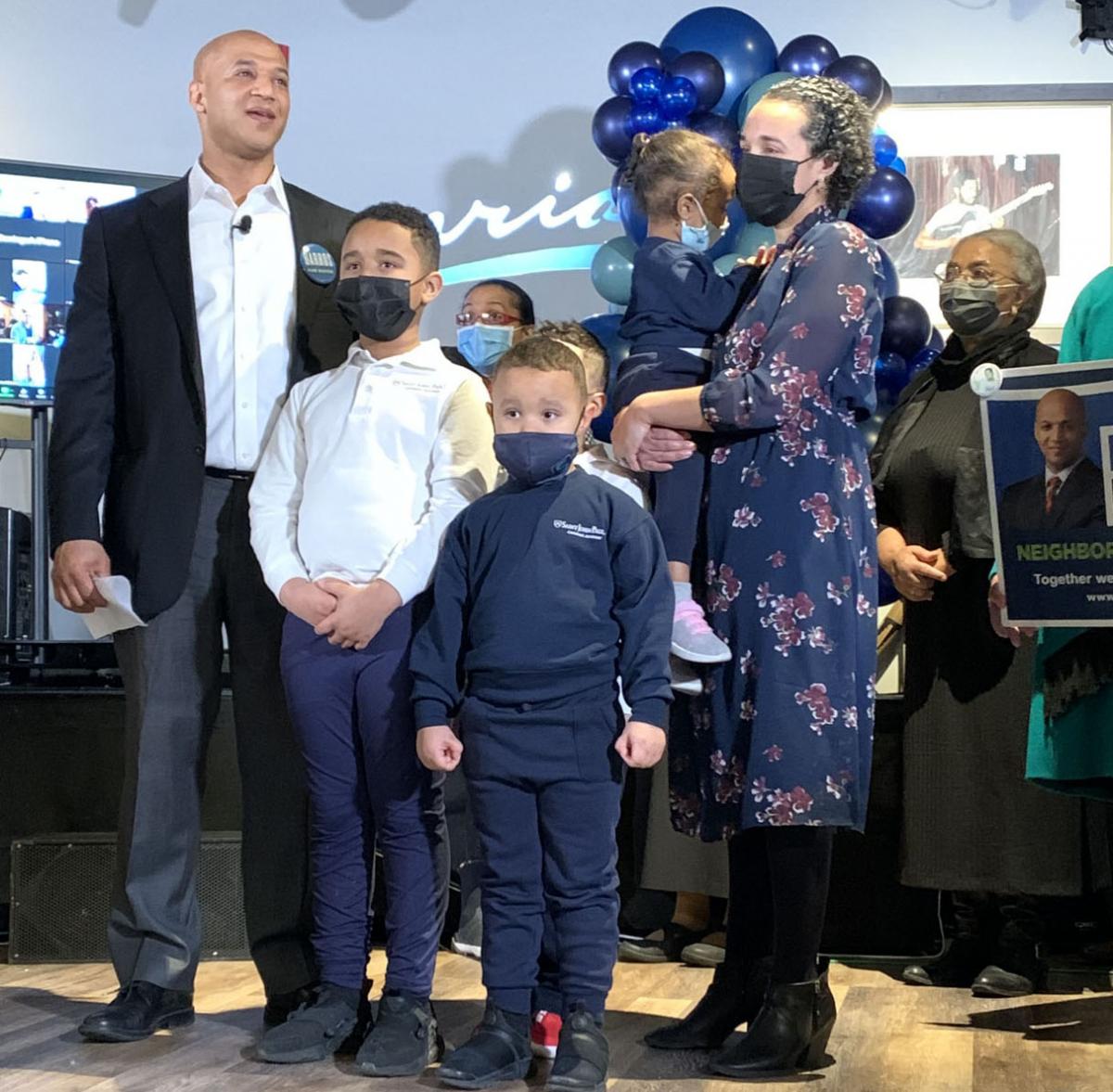 John Barros announced his candidacy for Mayor of Boston this morning inside Restaurant Cesaria on Bowdoin Street. He was joined by his wife Tchintcia and their four children, along with a handful of other relatives. Daniel Sheehan photo

Boston’s newest candidate for Mayor of Boston, John Barros, has a skill set and connections that make him a real contender to win the seat— much like the four candidates already in the still-evolving field. But there’s one element of John Barros’ resume that no other candidate now in the race can point to: He’s done this before.

Barros finished sixth in field of a dozen candidates in the city’s preliminary mayoral election in Sept. 2013. At the time, Barros was a well-respected leader in the city’s non-profit world, having run the Dudley Street Neighborhood Initiative (DSNI), a community-led organization that he’s been affiliated with since he was a young teen. He served as DSNI’s executive director for 13 years. He is also the co-owner of Restaurante Cesaria, the Bowdoin Street eatery that Barros used as the backdrop to announce his candidacy today.

Since 2014, Barros has been a member of Mayor Walsh’s cabinet, charged with managing Boston’s economic development work day-to-day and planning out a vision for the city’s future.

That experience, he says, coupled with his long-standing profile as a grassroots organizer in Roxbury and Dorchester, makes him a far stronger candidate this time around.

“I know a lot more about government today than I did in 2013,” Barros told the Reporter in his first sit-down interview as a candidate for Mayor in 2021. “I have helped lead the city for seven years. I understand budgeting and policymaking. I understand the relationship between the local government and the state government. I understand the relationship between the city government and the federal government. And I'm in position, in fact, to be, to a partner with the Biden administration to make sure that Boston is seen as a city that is ready to go on federal programs. And we have a friend there in hopefully Secretary Walsh in Washington and I will stay very close to make sure Boston is on the list of preferred cities.”

And, whereas Barros—a native Bostonian born to Cape Verdean immigrant parents— was less of a known quantity outside the Dudley Triangle in 2013, this time he has developed extensive contacts in the city’s boardrooms and Main Streets in other neighborhoods.

“I've also sort of walked streets in Boston that I hadn't walked before,” Barros said. “I've been to neighborhoods and parts of those neighborhoods that I haven't been before. I've had conversations, not only with the residents of, my neighborhood in Dorchester and Roxbury, but
I've had conversations in with business owners all across the city. So, I understand the nuances of Charlestown. I understand what's going on in East Boston. I understand some of the challenges in West Roxbury and some of their vision and what they'd like to see happen.

Barros has been mulling an entry into the race since Walsh was nominated to be Labor Secretary on Jan. 7. Why wait until now to officially jump in? Barros says he’s been doing his due diligence, assembling a team of advisors, and making sure that his family— Barros and his wife Tchintcia
have four children— are fully on-board with the decision. (They are.) Next came “a series of calls to people who supported me 2013” along with new contacts he’s made since that time. The feedback, Barros says, has been “supportive.”

“All of those have been favorable conversations and we're ready to launch," he said. "I believe I can step in and continue to help our city to respond to the risks of COVID and continue to keep us safe. When the new mayor takes over in the fall, my guess is we'll be at a different place, but they'll still going to be a lot of risks. We're not going back to pre-pandemic days. There'll still be some calls to be made on how people are participating in different spaces in the public.”

Barros enters what is already a formidable field of candidates, two of whom— Councillors Michelle Wu and Andrea Campbell— have been actively campaigning since last September. Annissa Essaibi George, also a city councillor, joined the race in January, while Rep. Jon Santiago announced his bid on Feb. 23. Still looming as a potential candidate is the woman who will definitely be the next mayor— at least in acting fashion: Kim Janey, the council president, who will take the reins from Walsh when he is finally confirmed by a slow-as-molasses US Senate.

Another reason Barros is just now jumping in, he says: He’s been helping prepare for the Walsh-to-Janey hand-off. He resigned from his cabinet post last Friday, six weeks after Walsh was first offered the post in Washington, D.C.

“The reason why I am announcing now, and I didn't announce immediately after I decided that I was interested in running was because I was committed to a transition and committed to the work,” Barros said.

Conversations with Mayor Walsh and Council President Janey, he says, “were clear.”

“I was going to help with the transition and make sure that she had what she needed,” said Barros, later adding: “I think we've done a great job of working with President Janey’s transition team.”

How does Barros fit into the current mix of candidates? Look for him to seek to marry his deep roots in multi-cultural, neighborhood-rooted organizing efforts to his more recent portfolio as Walsh’s liaison to bigger business interests. Pre-Covid, the Walsh cabinet could rightly point to significant job gains, a crane-filled skyline and a top-ranked credit rating that has gone unblemished in the Corona-crisis.

It’s a tantalizing union of street and boardroom that gave his ’13 candidacy some outsized juice — and a Globe endorsement. Serving as a bridge between the C-suites and Dudley Streets is a sweet-spot for Barros. He sees himself as a “facilitator to help align the agendas” of the two distinct Bostons that he insists are not “far off.”

“And that will continue to be how I govern,” Barros said, noting that he co-chaired the Walsh team’s Imagine 2030 initiative, which outlines goals for the city’s growth through that year.

“That kind of planning allows for certainty. Then you can say to a developer, this is what people are going to support here…. When we did that in Upham's Corner, people were shocked at how much density that residents wanted to see. And that's because they understood that density means that there are people locally to support those small businesses. It meant that we can be more transit-oriented and really create some demands around the Fairmount Line. It meant a lot as we were looking at the vision for an arts and innovation district in something that we could support the Strand Theater. And they also said though, if they want to make sure that there's a high level of affordability.”

But Barros’ profile as a Walsh loyalist comes, too, with some downside. The administration’s record on contracting with women-owned and minority businesses has come under new, unfavorable scrutiny after a report— commissioned by Walsh and Barros— found that their leadership has brought little movement in equity spending.

The report and the fallout is an annoyance to the outgoing mayor. It could be more than that to a candidate running— in part— on the Walsh record.

The challenge for Barros, then, will be to sell the upside the Walsh years while deflecting the worst parts.

One place to start is the Walsh administration’s widely lauded management of the Covid crisis— still very much a work in progress.

“We were managing the city in a way that allowed us to not have layoffs during the pandemic. Other cities across the country got hit hard and they were laying off laying off staff. They were cutting programs. We didn't have to do any of that in Boston, because we were prepared. We did a great job of uh, being ready,” he told the Reporter this week.

“I've got the experience and can help the city open back safely in a more just and equitable way. There are some things we can change in our economy, moving forward. We don't have to do, as we used to do it, there could be greater participation in our economy. We have unfinished business to do to continue to push the agenda for growing our economy and doing it in adjust in equitable way.”