Here's Fields Corner viewed in Atlascope: the map inside the circle is from 1918; outside it is present day.

Atlascope, a new, interactive map tool created by staff at the Leventhal Map and Education Center at the Boston Public Library, offers historians and history buffs an easy way to examine historic Boston through a lens that allows for detailed scrutiny.

The digital program, which creators designed to be similar to modern resources like Google Maps, was compiled from a collection of dozens of atlas volumes dating from a period between the Civil War and the first World War. These “super detailed” atlases offer a reference for what Boston looked like in those times, said Garrett Nelson, Curator of Maps and Director of Geographic Scholarship at the Leventhal Center.

“These urban atlases had two purposes: The main one was for the real estate industry; they didn’t have Zillow or anything like that back then. The other was for rating fire insurance. Companies needed to know what different buildings were made out of, how close they were to each other, and how great a risk there was of them burning...so the level of detail on here is pretty incredible. It shows the material, the number of floors, where they had windows and skylights. That’s what makes them so complicated and interesting to explore.” 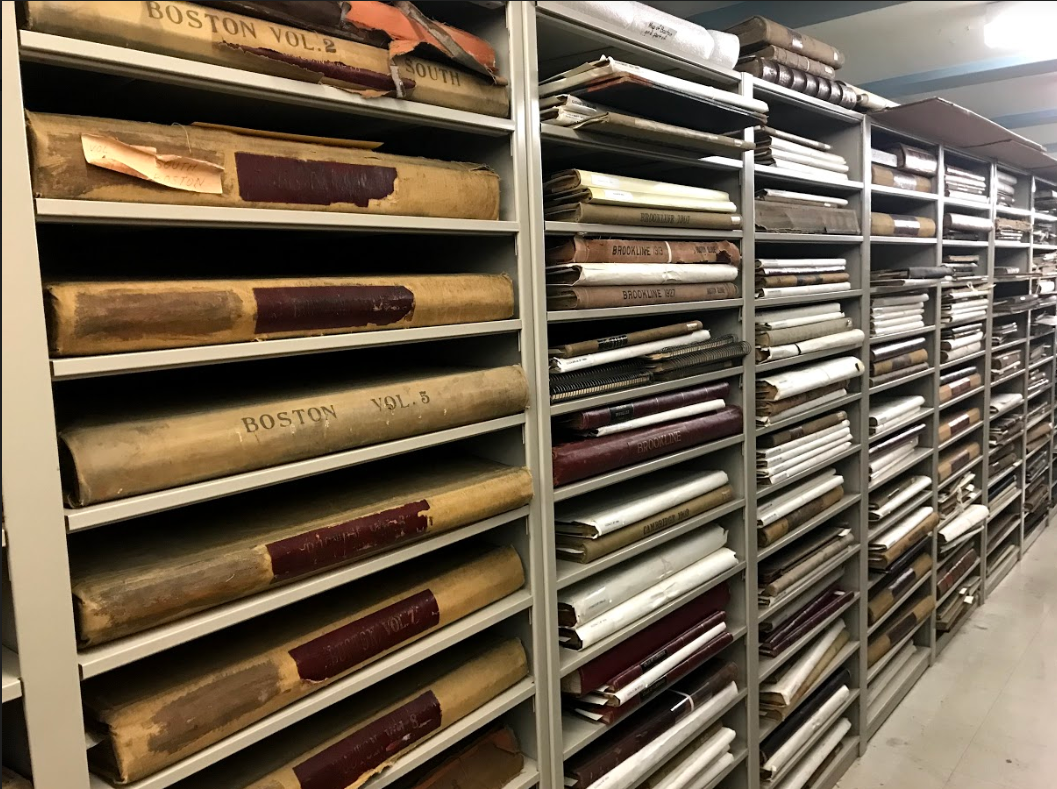 The collection of historic atlases on file at the Copley Public Library.

The daunting process of digitizing the physical atlases involved photographing each page, virtually stitching them together, and using geo-referencing – matching points on historic maps to points that still exist in real life – to warp the map into reality.
The result is an immersive, user-friendly resource that allows people to take any address or property in the city and delve through its history, comparing scenes from multiple atlases dating from the late 19th century, early 20th century, and present day.

“Our main goals were to make it really simple and easy to browse through, and also make it so that you could use it on a cell phone, and use the phone’s GPS to find where you are,” explained Nelson.

In a neighborhood rich in history like Dorchester, the Atlascope tool allows the curious to trace the evolution of certain blocks and see where and when historical events took place.

Often, snapshots simultaneously show us scenes that have changed and remained the same. In the map accompanying this story of Columbia Point in 1889, we can see the calf pasture pumping station, which was the city’s first sewerage system, and also as it still stands today. Just below it, gas tanks owned by the Bay State Gas Co. appear where UMass Boston campus buildings stand today.

In other cases, we can see instances of history repeating itself. In 1898, the current site of Carney Hospital on Dorchester Ave. was the site of a Convalescent Home for City Hospital, which housed a sizable tuberculosis ward, according to Garrett. Fast forward a century to the ongoing pandemic, and Carney is now the city’s designated COVID-19 hospital, being used to isolate those suffering from a new viral outbreak.

History repeating itself: what is now Carney Hospital, currently home to a COVID-19 care unit, once housed TB patients.

Compared to the old method of leafing through disorganized physical atlases, Atlascope’s one-stop online database is a breeze. It’s already being used in K-12 and university education and being promoted for walking tours and neighborhood explorations of historic sites. In self-isolation, it presents an opportunity to explore your neighborhood as it was 100 years ago, and its mobility allows residents to step outside for a breath of fresh air and compare their block to that of atlases past.

“This has made it so much easier to get at it, compare it; you don’t have to come and browse at a library,” said Garrett. “It opens up whole new way of seeing city and thinking about historic maps...and shows us that the places we live in today have this really striking historic legacy.”