A rendering of the five-story building shown during the virtual meeting. Courtesy of Choo & Company, Inc.

The proponents of a five-story mixed-use development originally proposed last year for a vacant lot in Uphams Corner told about 40 people last Tuesday that they have “hit the reset button” on their review process during a virtual meeting hosted by the Boston Planning and Development Agency (BPDA.)

Property owner Greg McCarthy’s proposal for 706 Dudley St. calls for 26 two-bedroom condominium units – 3 on the first floor, 6 on the next three floors, and 5 on the fifth floor— and 17 parking spaces tucked underneath 2,747 square feet of commercial space at ground level.

The project would include three affordable housing units per the city’s Inclusionary Development Policy.

Arthur Choo, project architect and associate at Choo & Company, Inc., said that design elements would “fit into the neighborhood” in terms of height, scale, and brick masonry. Choo also pointed to existing buildings in the surrounding area with similar heights to McCarthy’s proposal and zero lot lines.

Some attendees voiced concerns over affordability, a lack of community outreach, and the process of the BPDA-led Zoom meetings. Joanne Tuller, a nearby resident, said the project “represents gentrification in the neighborhood.”

John Pulgini, an attorney representing McCarthy, said that the condos would likely be priced in the $380,000-$400,000 range.

“A $380,000 price point I think is on the lower end. I think you’d be hard pressed to find anything in that price range on a condominium in construction,” he said. “But your point is well taken. Our intent here is not to gentrify the neighborhood and force people out.”

Added McCarthy: “If you look at what it costs even for a condo in a [three-decker] in this neighborhood, it’s pretty much in line with that. It’s not a more expensive project, there are just more units. The entire cost of the project comes out to be in the mid- $300,000s per unit. So we’re essentially on tight margins.”

Tuller and a few others were also concerned about the Zoom format and meeting procedure. “I know we have to stick with Zoom and I’m totally in favor of that, but I would like it if we could see who else is here,” she said.  “I have no idea how many people are in this meeting and when we can’t see the other questions that people are asking we can’t really have a group dialogue the same way that we could in person. I would argue for the chat function.”

Saba Ijada echoed that sentiment, saying: “We lose the ability to network when we are not able to see each other, even if it’s virtually.” 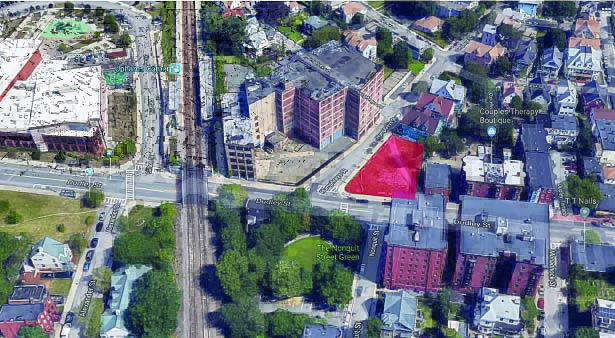 An aerial view shows the vacant lot at the corner of Dudley and Humphreys Streets.

Stephen Harvey, BPDA project manager, said he would bring the feedback to the agency. “That’s something that’s been of debate on many other meetings that I’ve hosted. I do understand the difficulty of trying to have meetings in this format,” he said.  “However, the ability to have a discussion also can get eroded with the chat format. We’re still looking at different formats, but I will take back your concerns and comments.”

When the proposal was last aired to the community in September 2019, during a BPDA-hosted public meeting that was dominated by neighborhood residents, many were upset by what they claimed was an effort by McCarthy to clear out tenants in another property he owns nearby, at 6 Humphreys St., by giving no-fault eviction notices to everyone living there, a process that had been initiated by the building’s previous owner.

Since then, in November 2019, a jury granted two tenants of 6 Humphreys, Jean Paul Doh and Tunde Kunnu, possession of their property and the right to remain in their apartments.

Pulgini said the team will be engaging in a “completely new” process with the community.  But there was still much discussion about the issues at 6 Humphreys St.

“Why would the city allow a developer who has treated his tenants at 6 Humphreys St. terribly, who is dragging his feet and barely complying with court orders to repair that building, who is doing everything he can to avoid the law and maltreat the neighborhood, to develop a new property in the neighborhood?” asked Lori Hurlebaus, a Dorchester resident.

Harvey jumped in at that point: “I do understand the community’s concern with this project. We’ve worked with city officials and tried our best to understand the 6 Humphreys situation and work with the developer. Every developer, no matter how the neighborhood or folks view them, has the right as a property owner to present proposals to the community.”

McCarthy then shared his perspective on the amends he has made since last year.

“Less than a year ago I had proposed to renovate the building and keep all of the tenants in there for a discounted rate. We’re well on our way trying to renovate the full building. We offered them brand new apartments for the same amount they were paying— or actually not paying,” he said.  “I have never collected rent in this apartment for the two and a half years that I have owned it. Not one tenant has ever paid me, and I have been spending an enormous amount of money renovating. I don’t know what else I could possibly do.”

“In 2019 at our last meeting, this issue was the elephant in the room and it was a big sticking point for a lot of people; it hit a nerve. People were angry about it and they wanted action,” said Pulgini, urging McCarthy to further elaborate on his efforts to honor the agreement reached with the tenants’ attorneys last year.

“I’m giving them completely brand new units and five-year leases. I’m working toward good relationships with the tenants and I thought we were on a pretty good path,” said McCarthy.

Hurlebaus doubled down: “The meeting definitely was contentious and there were a lot of concerns around 6 Humphreys, and those tenants did win their case, so I think there’s some framing, Greg, that I don’t think is fully accurate.”

She added that there were also concerns raised around the process of the last meeting and a lack of community engagement prior to it. “People were concerned about having more community engagement that would allow for more participation including interpretation and a more rigorous community outreach in multiple languages. Y’all did agree to that,” she said.

Pulgini said that the team, having entered into an entirely new process, will be open and accessible to the community going forward.

“The last meeting— it was a dumpster fire— I think you’ll all agree with me on that,” he said. I think out of hundreds of meetings that I have done that was probably the worst and after that meeting the whole thing got put on pause. The BPDA was upset about Humphreys Street. That was the real issue with a lot of people,” he said.  “It happened over a year ago and we hit the reset button and came back. We have a new BPDA project manager and the comment period is not closed. The whole project team will be available and we will make sure this project goes through a fair public process whether or not it gets approved.”

Hurlebaus said she hopes that an affordable housing developer will acquire McCarthy’s building at 6 Humphreys and convert it into deed-restricted affordable housing units. Such acquisitions are now a goal of Mayor Walsh whose updated housing plan calls for 1,000 apartments to be stabilized in this way.

The public comment period for the 706 Dudley project is open and accessible on the BPDA’s website, and additional community engagement meetings will be scheduled.