The red flag ("unsafe") was up on Monday at Malibu Beach. Bill Forry photo

Water quality at Dorchester’s three beaches worsened last year, according to a new report by the non-profit Save the Harbor/Save the Bay that tracks year-to-year data at urban beaches.

In 2019, the overall safety rating for regional beaches managed by the Department of Conservation and Recreation was 88 percent overall, a decline from the 2019 score of 94 percent. In Dorchester, Malibu Beach scored at 83 percent, down from the previous year’s 91. Savin Hill Beach declined from 100 percent to 79 percent and Tenean Beach went from 78 to 67 percent, making it the unsafest beach for swimming.

The scores reflect the percent of samples that complied with the Massachusetts Department of Public Health’s single sample limit for bacteria, which the report calls “the most straightforward way of evaluating beach water quality and potential impacts on human health.”

Changes in the intensity and frequency of summer rainstorms last year is seen as a likely factor contributing to the variation in water quality, said Bruce Berman, director of strategy and communications for Save the Harbor /Save the Bay.

“The period that we looked at in this report included 12 months of the largest rainfall that we’ve had in 141 years of recorded history,” said Berman. “And water quality of the three beaches in Dorchester is profoundly affected by rainfall. Of all of them the one that’s most consistently affected is Tenean.”

Still, the drop in scores for Dorchester’s three beaches has raised some concern for nearby residents.

“It’s disappointing that over time the water safety quality has decreased at our beaches when most of the others have improved,” said Paul Nutting, a longtime Savin Hill resident who has been a leading advocate for local beaches and waterfront amenities in Dorchester.

“I know there’s a seasonality to the testing and rain, but it seems like that might skew all of the results and not just the Dorchester ones.”

Nutting said he suspects that pollution in the Neponset River— which empties into Dorchester Bay near Tenean Beach— might explain some of the discrepancies in water quality.

“There’s definitely the influence of the Neponset River for our beaches, whereas at M Street beach or Carson they’re getting more of an ocean flushing influence,” he said. “During thunderstorms, all of it washes it down, and most of the others don’t have the influence of a river coming into them nearby that could potentially affect the quality.”

Berman agrees that the Neponset is likely a major contributor to the drop in scores last year. The Boston Water and Sewer Commission, he said, has done “a terrific job in addressing combined sewer and storm water overflows” near Tenean. Still, he added: “No matter what you do to clean up the pipes at Tenean, the Neponset continues to be a challenge. A lot of the problems in the Neponset don’t come from pipes; they come from runoff and stormwater.”

Maria Lyons, who lives in Port Norfolk near Tenean Beach, said storm overflow is a “very troublesome problem” there. “The beaches in Dorchester are where the people of Boston go who don’t have a house on the Cape or don’t have a ton of money to leave the city,” she said. “We have this wonderful opportunity and a lot of the time people can’t go in the water,” which, she added, “I consider an environmental injustice issue. Tenean was always the poor man’s beach and it still is.”

Lyons has for many years complained that the use of the adjacent Victory Road Park as “an off leash dog park” also contributes to poor water quality at Tenean.

“Nobody regulates that area and it’s worn down and eroding away into the ocean. And of course all of the dog waste goes over to Tenean Beach,” she said Lyons. 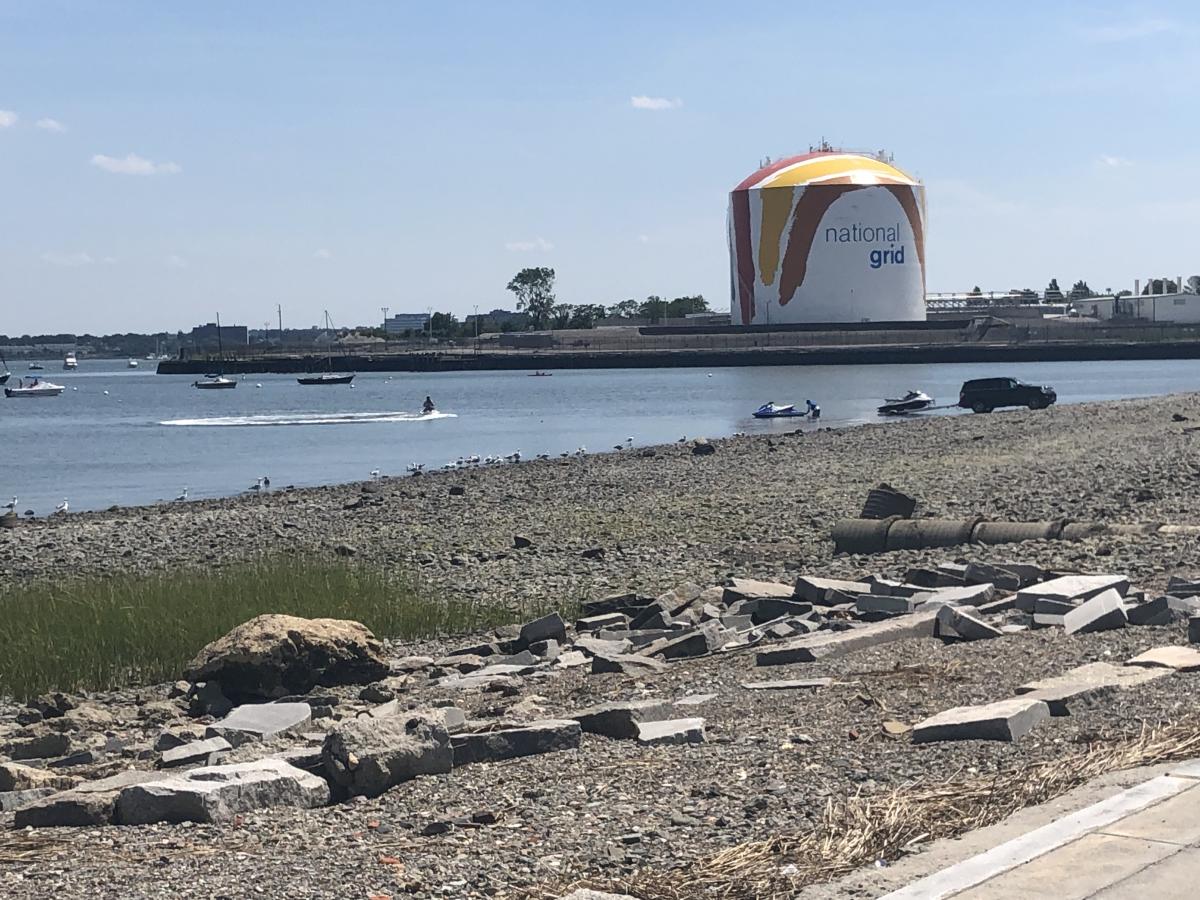 On Monday, a jet skier enjoyed a ride across from the gas tank near where a man was killed when his jet ski crashed into a sailboat on Sunday.

The report, issued last week, also identified a “critical weakness” with the way state officials alert the public to potential water quality hazards at the beaches. Currently, beach-goers are signaled by a red or blue flag flown from lifeguard stations at the beaches. (Blue means safe, red means unsafe.)

But, flag postings are always “a day late,” Berman said, since officials have to wait 24 to 36 hours to get test results that inform the warnings.
“The flagging system is fairly simple. You take a sample, put it in a temperature-controlled room, and leave it for 24 hours,” said Berman. “The tests identify the numbers of enterococcus bacteria in the samples, and if there are more than 103 colonies per milliliter of water, it exceeds the sample. This means that the flags are always 24 hours late, and that’s a problem.”

Berman says one potential solution to “do modeling, and look and see just how much storm water it takes to make a beach dirty. When you think you’re going to have that much rain you put up a flag as a precaution.”

Nutting also pointed to the issues with the current beach flagging system, noting that there has been talk “for some time” about changing the model of the signs to avoid a lag and improve accuracy.

“The current water quality testing system creates a lag time between when the test is taken and when the results come back and the flag goes up. It’s flagged for the interim, but we don’t know what happened in the interim,” he said.

“There had been some talk about a year ago over creating some sign of modeling based on the amount of rain you get, meaning that beaches would close when we get a storm. You know, at what point does the amount of rain trigger a beach closure?”

Save the Harbor/Save the Bay plans to host three forums and a conference later this year and early in 2021 on “the future of public beaches.” The organization says it will collaborate with community partners in waterfront neighborhoods and beachfront communities to address systemic racism, sea level rise, and the impacts of the COVID-19 pandemic.

Berman says that lower rainfall this summer— so far— will likely lead to better water quality scores in next year’s report.

He added: “No matter what flag you see on the beach, use caution. If it rained in the last 24 hours, use caution.”