Skip to main content
Rachel Rock, Special to the Reporter

On a hot August evening, Devin Edwards stopped in at an elderly neighbor’s house on his way home from work. That morning, Edwards had received this woman’s frantic call reporting a dead squirrel on her electrical wire. Upon arrival, he found her sitting in her garden, eyes locked on the dangling rodent. Though small in stature with a slight build, Edwards made several attempts hurling rocks and sticks to knock the rodent to the ground. Then, his better judgment told him to go through the proper channels. He uploaded photos to Boston’s 311 service request system and discovered that the line was jointly owned by the electric company and a local cable provider. He left the house, confident that he had set a solution in motion.

The 25-year-old Edwards is a legislative aide to Massachusetts state Rep. Russell Holmes and solving constituents’ problems is the bread and butter of his work. Holmes represents the state’s’ Sixth Suffolk District, which includes parts of Dorchester, Roxbury, Mattapan and Jamaica Plain, and some of Boston’s poorest streets. He has taught Edwards to see the community in which he was raised as his boss.

He projects confidence in his role as an advocate and guide for his community. He takes all requests seriously, from housing issues to dangling dead squirrels. “I get up every day because it’s a passion and there’s a certain feeling in my heart that I definitely get from being able to service my community, give back to my community,” he says with his signature smile.

Edwards’s squirrel-removal efforts paid off. Several days later, his neighbor called to thank him for showing her that she was important to him. She told him that Rep. Holmes had gained a “forever supporter.”

Winning over supporters is at the core of Edwards’s life story, even though reaching his position of influence in the Massachusetts legislative process was hardly predestined and even against the odds. He grew up with a deep distrust of government as an agent of positive social change, taking a view that had been passed down through the generations in his community.

In addition to being unlikely, the route Edwards took to Holmes’s office was littered with obstacles and pain. Yet it’s that lived experience that gives him credibility – and, by extension, Holmes – with his community.

“He brings a life experience that most folks don’t see at the State House,” said Holmes. “And it’s important for people to see that when they call into the State House, when they arrive and have never been into the building, they say, ‘Whoa, who’s this young man who actually has this amount of influence?’”

In 2012, just before Edwards’s 18th birthday, his father died after a long battle with sickle cell anemia. Grieving and angry, he dropped out of high school, began running the streets of Boston and dealing drugs. Finally recognizing that his life had spun out of control, Edwards left to live with his aunt and uncle in Florida. Two years later, he returned to Boston, determined to get his life back on track.

“For a long time, I showed my little brother and sister the wrong way to be,” Edwards says. “My mom was a great mother and instilled in me great mannerisms. She put me through good schooling, and I didn’t follow the path she had for me.”

A neighborhood street worker steered him toward what would become a second-chance journey by suggesting that he enroll in a paid internship with Resilient Coders, a tech training program offered with support and mentoring through Youth Options Unlimited (YOU). Jonathan Makrez, then-YOU program director, said that Edwards stood out from the beginning.

“His personality and social skills were special. I thought, ‘Who is this kid?’” said Makrez. “He was always asking for constructive criticism and ways to improve.” Now, years later, Makrez considers Edwards a colleague and recognizes the potency of his demonstrated ability to connect the dots for others like him.

Says Edwards: “I tell other brothers, ‘If I can do it, so can you.’ I try to teach them the importance of local government and of just trying to make sure you can do things on a straight and narrow. But I also try not to be a hypocrite. That’s a life which I came from. I’m not going to speak down on it.” 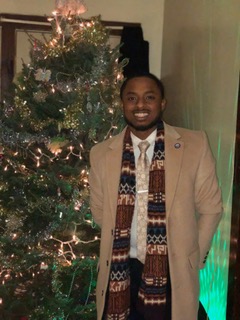 This life remains the backdrop of his days and his source of comfort. With little free time available because of work and attending college classes at night, Edwards hangs out with family and friends, tries to work out, and dines out at a one of his two favorite restaurants, Oriental De Cuba, in Jamaica Plain or, Green Tea, in Lynn. On Fridays, he goes to see his barber for either a haircut or a shape-up. And every other week, in search of solace, Edwards goes to the gravesite of his best friend, who was killed by street violence in 2016.

He embraces his status as a role model, nurtured in part by Conan Harris, one of his most influential mentors. Harris, formerly Boston’s deputy public safety director, is a force of nature with his mission to raise up young men of color. To Harris, Edwards is emblematic of the many young men in Boston who need believers rather than saviors to unlock their power.

“I told him that public service is not about being self-important,” Harris says. “No, first it’s about being an example to your family and friends. Second, it’s about reaching back and pulling other brothers up.”

Harris met Edwards as a student at Resilient Coders and saw in him a potential young leader in Boston’s efforts to open up access to opportunity for all citizens. “I recognized that Devin had a yearning and humility,” said Harris. “I placed him in the newly created Professional Pathways program that paid interns to work in the city hall offices of department chiefs and gain exposure to a wider range of job possibilities.”

His work at City Hall was just the start of Edwards’s expanding world view. He joined Harris to meet President Barack Obama at an event in December 2016 in North Carolina for Obama’s national initiative, My Brother’s Keeper (MBK). Despite being a “nervous wreck,” Edwards went to the microphone and asked the president, “What do you see MBK continuing to provide for brothers like myself who come through violent neighborhoods and troubling upbringings?”

Obama, who had met Edwards before the event, acknowledged the road Edwards had traveled and spoke of his plans to reach more individuals like him.

On a recent afternoon, Edwards listened carefully as Tiffany Vassell lobbied him for support of a bill in the Legislature that would expand Medicaid coverage to include doula (childbirth) services. Wearing a gray suit and an open necked purple shirt, Edwards read over the legislative fact sheet, his right elbow on a desk chair. On his jacket lapel is a small gold pin with the emblem of the House of Representatives.

Vassell and Edwards both live in Holmes’s district and know that what she was advocating for would save lives in a community where black and brown women suffer much higher rates of pregnancy-related complications.

Over the past few years of working inside local and state government offices, Edwards has developed his capacity to help people. He described a recent situation where he spent hours with a constituent in a basement office of the State House helping resolve an issue related to child support payments.

“I sat there, kind of like incognito, to see what the experience was like and it wasn’t great. I felt as though the state employee was in a very overwhelming position, but I also knew that she wasn’t helping my constituent do what she needed him to do,” explained Edwards. “As it became contentious, I stepped forward to say that I represent him at the state level. At that moment I guess my presence and how I approached this situation...she brought it down...he brought it down. They were able to communicate with each other and figure things out.”

In that moment, Edwards stepped into the potential that Harris saw within him years earlier. “I felt as though this is why I’m here and that’s why I’m part of the work, to bring my experience and bring everybody else’s experience so we can make these systems work a little bit better for both sides.”

Edwards wants his life over the past four years to demonstrate to others with similar backgrounds that the city of Boston and society have not given up on them. Second chances do exist.

“I try to tell the youth what I’ve been through, but I also tell them they have to be ready for a certain change in life,” says Edwards. “It’s kind of that analogy that you can bring a horse to water. The horse has to want to drink.”