Emma Allen runs the bases in Dorchester's win over the Watertown Raiders on Sunday. All photos by Erin Kelly

Girls from Dorchester’s ADSL Softball League have continued their softball season in the highly competitive Charles River Fall Softball League this fall, playing double-headers every Sunday morning. With one weekend left in the fall season, the Dot girls have a 7-3 record, playing some of the strongest teams in the area from Parkway, Westwood, Norwood, Newton, and Watertown.

Dorchester will close out the fall season with a doubleheader in Newton next Sunday.

This past Sunday, the Dot team swept a tough Watertown Raider team— which includes players from Waltham as well— taking the first game, 8-0, and the second, 12-10. The later game saw ADSL turn back a late-inning Watertown surge to hold onto the victory. 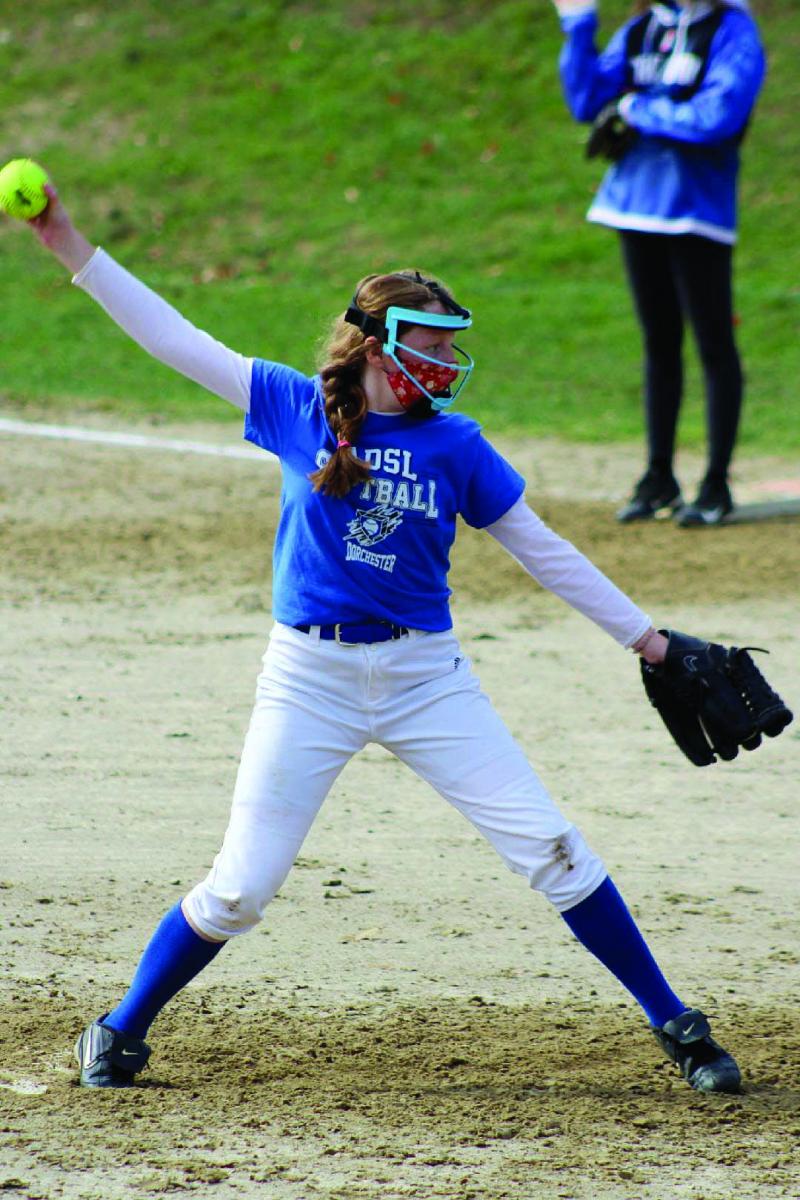 Addie Willet winds up a strike for the Dot ADSL girls.

Addie Willet and Kelly McKenna started the scoring for Dorchester in the first inning, each drawing walks and stealing second, third, and home. Audrey Kelley tried to follow suit, reaching base with a single and stealing second and third before being called out for batter interference on a delayed steal of home.

In the third and fourth innings, Dorchester scratched out only single runs with Molly Hearon scoring on a single by McKenna in the third and Christina George, who had a hit, an RBI, or a walk in each of her plate appearances in both games, scored on a single from Mickayla Miller in the fourth.

The high-scoring Dorchester offense took off in the top of the fifth when the girls plated four runs. Maggie Janulewicz led off with a walk and immediately swiped second base. Rory Shields smashed a single to right center to drive in Janulewicz and then stole second herself. Emma Allen followed with a sharp, seeing-eye-single through the infield to score Shields. Molly Hearon singled and scored when McKenna was hit by a pitch with the bases loaded.

After just a fifteen-minute rest, Addie Willet took the hill for the second game. She pitched well, striking out four over three and two-thirds. But the Dorchester offense was the story of the game, scoring four runs in each of the first three innings.

Willet and McKenna started the game with back-to-back walks. Willet scored on a single ripped to center by Audrey Kelley, and McKenna scored on a big hit from Katie Kelly. Shields then drove in Kelley and McKenna with a double she crushed into centerfield. 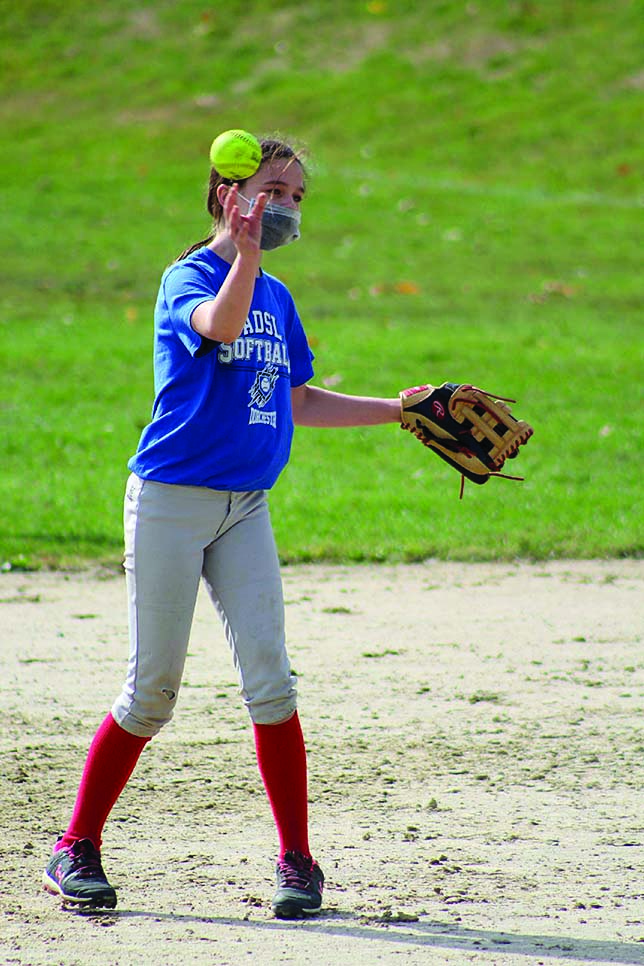 Mikayla Miller readies a pitch for the Dot defense.

The second inning was highlighted by some of the most aggressive baserunning of the fall season. Mickayla Miller led off with a sharp single up the middle. She then stole second and third with such great jumps that the Watertown catcher never had a chance to throw her out. Miller then came home on a passed ball.

Rookie nine-year-olds Nina Kelley and Maggie Janulewicz followed suit. Kelley walked and stole second cleanly, then took third after an incredible jump on a pitch that barely strayed from the Westwood catcher, then scored home on close play at the plate after a passed ball. Like Kelley, Janulewicz walked, swiped second, and then took third on a passed ball. She scored on an overthrow of Watertown’s attempt to catch her at third.

Dorchester closed the scoring in the second with another single from Emma Allen, her second of the day, and a double that Julia Studley hammered into right-center to drive in Allen. 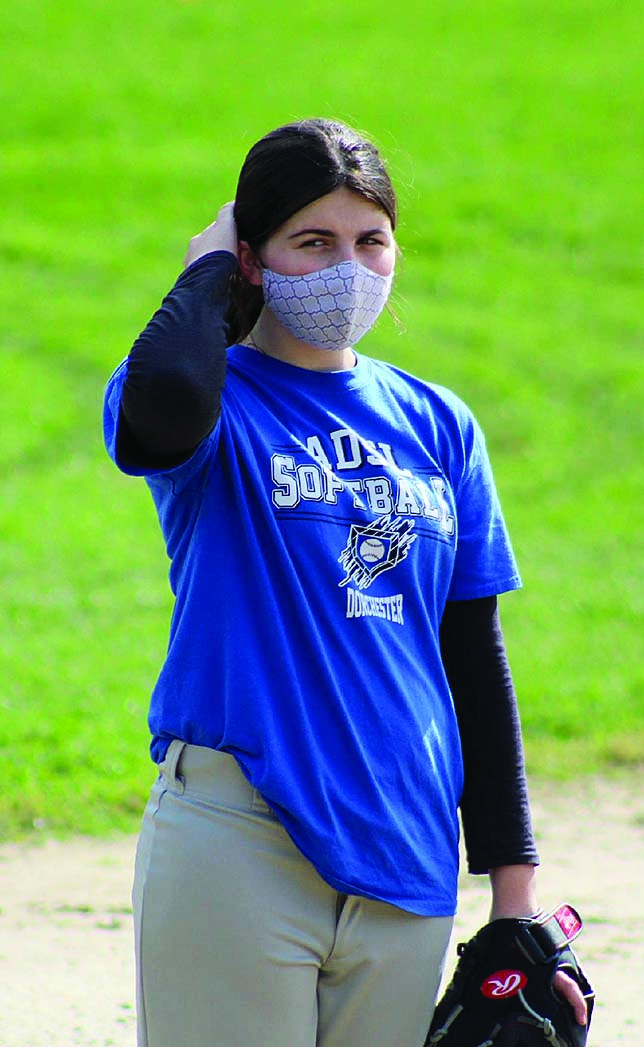 Katie Kelley on the mound for Dot.

In the third, Dorchester ran its two-game total to 20 runs. Molly Hearon walked. Nieve Tobin drove in Hearon on a hard-hit single. After Tobin swiped second, Willet walked. McKenna followed with a single of her own to drive in Hearon and Tobin. Katie Kelly then came up big once again with her second hit to the outfield to drive in Willet and McKenna.

Dorchester needed some well-timed defense and strong pitching to close out the 12-10 victory. After playing strong defense behind the plate during the first two games, Lila Curly took the mound to close out the two-run game. She coaxed a pop-up to second that Rosa McLaughlin calmly collected for the first out. The next Watertown batter cracked a single to right center, but Mickayla Miller fired the ball to first base, catching the runner trying to round first for the second out of the inning. After a walk, the tying run came to the plate. But, Curly was unfazed. She fired a tough strike on the next pitch, coaxing a harmless blooper to end the Watertown rally and save the win for Dorchester. 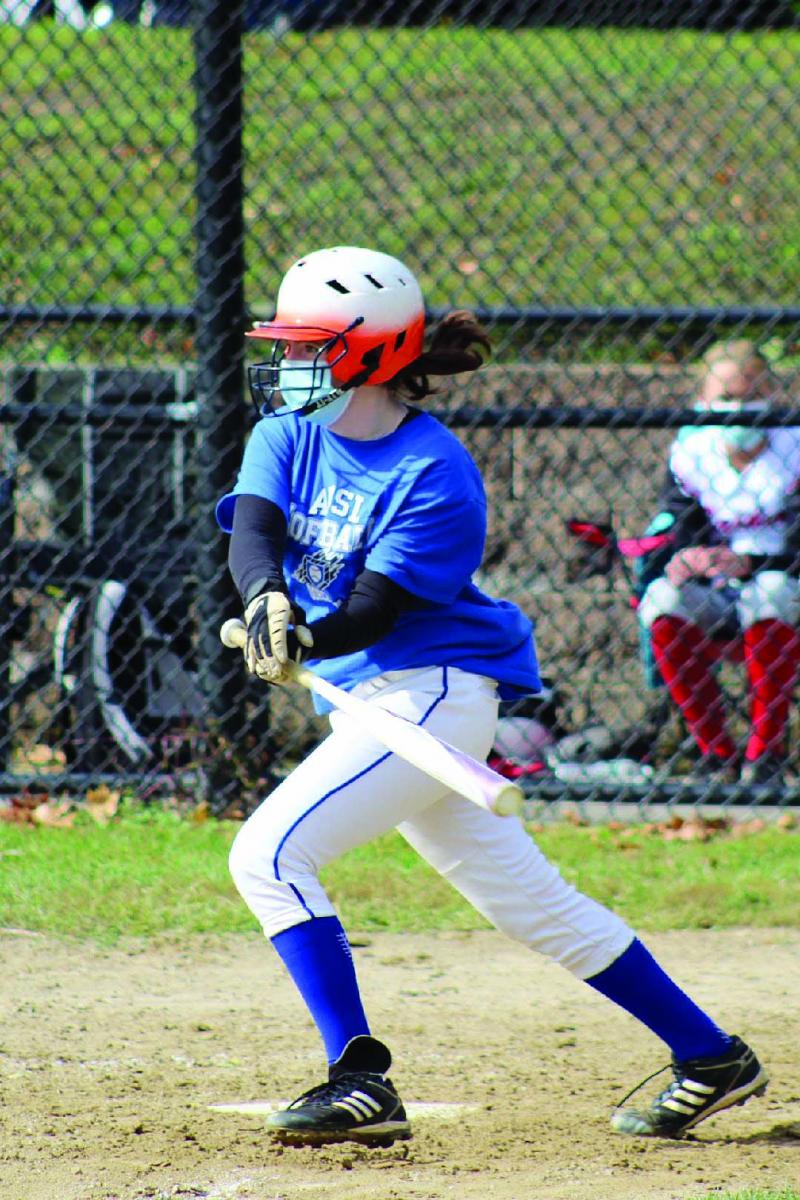 Dorchester has seen contributions from several other players throughout the fall season. Alannah Tankle has been sharp at shortstop and centerfield and is very speedy on the bases. Ava and Riley Porter have stepped up nicely. Lila Orfaly arguably had the best at-bat of the season last week with two outs and bases loaded in the last inning, working a full count against the Parkway pitcher and then fouling off four in a row before drawing the walk that let in the tying run.

Coaches Kevin George, Jason Willet, and Neil Janulewicz really appreciate the girls’ enthusiastic spirit as well as the parents for getting the girls to away games.

The coaches are impressed with the top-notch Charles River softball organization and talent and sportsmanship of our opponents.

Dan Clark and Bob Dillon as well as Ann Walsh entered teams in the older division and are competing well. The players and coaches are very grateful to generous sponsors: City of Boston Credit Union, Mass Fallen Heroes, and the Boston Firefighters Local 718.