District 5 Councillor Ricardo Arroyo is shown as he spoke during a council meeting conducted via the online tool Zoom on March 25.

(Updated— Wed., March 25, 8:20 p.m.) — In the City Council’s virtual meeting on Wednesday, District 5 Councillor Ricardo Arroyo offered a resolution calling for a citywide moratorium on rent, mortgages, evictions, and foreclosures. District 3 Councillor Frank Baker blocked the resolution — which was otherwise supported by 12 members of the 13 member body— forcing Council President Kim Janey to refer it to a committee hearing.

“This is quite a complex issue here,” said Baker. “I would like to invoke rule 33 to make sure that this goes into committee and we don’t take a vote on this today. I believe it’s too complex, and I don’t think this is within our power to call for a moratorium.” 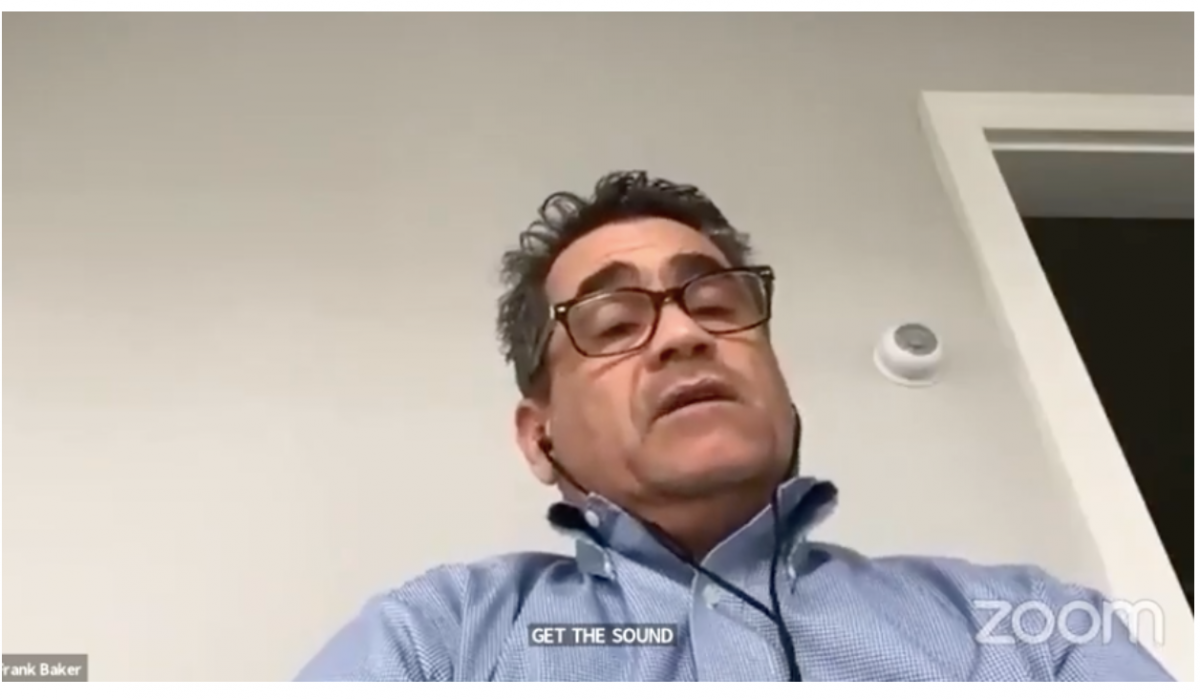 After the meeting Councillor Arroyo took to Twitter, asking residents to email Councillor Baker and urge him to support the resolution.

Arroyo wrote: “Today, all councilors, except for Frank Baker, supported my resolution calling for a moratorium on rent, mortgage, evictions, and foreclosures. His objection denied us a vote on this. Email Frank Baker at frank.baker@boston.gov and urge him to support it.”

Arroyo had also said on Twitter before the council meeting that Mayor Martin Walsh supported his resolution, writing “Just got off a call with Mayor Martin Walsh and he pledged to support my resolution calling for a moratorium on rent, mortgage, evictions, & foreclosures.”

In offering his resolution at the meeting, Arroyo urged the council to pass the resolution, which he said was urgent and necessary.

“These past few weeks have altered the word that we live in forever. I’ve had regular phone calls from residents who are facing the most difficult times of their lives,” he said.

Arroyo continued: “This is urgent for the vast majority of our residents, property owners, and business owners. Many are wondering how they are going to pay their rent and are running out of money for food and medications.Business owners who have poured their lives into their businesses are facing the possibility of having to close those businesses forever.”

Arroyo noted that property owners in the city of Boston “pay some of the highest mortgages in the country,” and are scared of losing their homes and properties due to a loss of rents or inability to pay banks because of COVID-19 related loss of income.

“The right thing to do for all of them, the just thing to do, is to immediately order a moratorium on rent, mortgages, evictions and foreclosures,” said Arroyo. “We cannot close businesses and mandate that residents stay home. I’m asking that the Boston City Council come together as one voice and support this.”

Janey referred the resolution to a hearing that will be held by the committee on housing and community development, explaining, “Because there has been an objection, we have to refer it to a hearing.”

In a phone call on Wednesday evening with the Reporter, Baker explained his decision to seek a hearing before taking a vote.

“I want to stress that I don’t disagree with the intentions of this resolution. I would just rather have a hearing when it comes to something as complex as this,” said Baker. “To ask for something like that-- calling a moratorium-- is not within our purview or power.”

Baker added: “This move to me looked like pure political posturing on his [Arroyo’s] part, trying to take advantage when we’re in a pandemic situation. He’s trying to score points here and I didn’t care for it.”

"There’s already an order for no evictions for two months in place coming down on the state. Nobody’s going to get kicked out of their homes.”

While Baker said he supports a committee hearing on the issues outlined in the resolution, Baker ultimately thinks that leadership should come from federal and state levels.

“We need to do something about it but it needs to come down from the federal and state levels.”

Baker said that he’s received “vulgar” calls on his personal devices in the hours since the council meeting.

“My home phone, my cell, and even my wife’s cell have been published,” Baker said. “I wouldn’t even say to anybody some of the things we’ve been hearing. The messages being left on my wife’s phone are vulgar.”

The rest of the councillors at Wednesday’s virtual meeting expressed support of the resolution, although a couple did call the situation “complex,” and urged careful consideration of ripple effects. District 1 Councilor Lydia Edwards said she supported the resolution, but wanted to make sure the council kept in mind the “burden,” it would place on some.

“I think we as the council certainly need to say in one voice that we see folks struggling and we understand that…. We also need to acknowledge that we are placing a burden on corporations and we need to make sure that we are addressing that,” said Edwards.

At-large Councillor Michelle Wu said, “It’s important for us to be pushing for this at the city level. We know that the devastation will continue even after the public health crisis has quieted down. Now is the time to step up and start putting in place the steps to have an equitable recovery from this.”

“In the midst of a public health emergency, there are things we have to secure first and foremost for residents-- and that's food and shelter. If you think that a foreclosure or eviction is hanging over your head it’s impossible to find any peace,” said Bok. “No evictions are going forward in the state but legislation has to recognize that whole economic ecosystem in addressing the issue. We will need to work out the details at every level.”

At-large Councillor Julia Mejia said that, if passed, the resolution should add some language to make sure landlords are communicating its information to their tenants.

“Communication is key,” said Mejia. “Some folks might not want to communicate this to their tenants. There is much anxiety from residents around this and we need to act swiftly if we hope to pass the resolution before April 1st. We also need communication and translation into multiple languages to make this accessible.

District 4 Councillor Andrea Campbell supported the resolution, saying: “No one should lose their home because of a health crisis.”

Added Campbell: “It’s critical and it's essential from an economic and public health perspective — and it’s the just and moral thing to do. I want to thank the Mayor for his leadership on this and for encouraging the real estate community to have moratorium on evictions.”

District 6 Councillor Matt O’Malley said that the council must take “extraordinary action during these extraordinary times,” but he did add that the situation is complex.

“There is of course a complexity to this, but it’s something we need to do--obviously in concert with state governments and the federal government as well,” said O’Malley. “Like everything we seem to be dealing with lately, it’s like a rubix cube. We change one thing there’s ramifications elsewhere. But ultimately I think this is a good move and something I support.”

“I know that we have folks in the city who are in dire circumstances,” he said, “we need to recognize the severity of this situation.”