Inside the rooms of an unassuming three-decker in Uphams Corner, copper rules. The gleaming metal is everywhere — in the form of pots, pans, light fixtures, model vehicles, decorative hardware, and artwork.

On one wall is a visage of President Barack Obama in profile etched on a sheet of copper through an oxidation process. On another, a painting titled “The Copper Man” portrays T. Michael Thomas, the owner of the home and the master craftsman behind much of the handiwork in it.

A lifelong Dorchester resident, Thomas honed his metalworking skills at the Local 17 Sheet Metal Workers union on Adams Street, where he was one of very few Black tradesmen. His experience there led him to start The People’s Academy (TPA), a non-profit based at the Uphams Corner house that trains neighborhood young people in the copper and metalworking trades.

“There wasn’t a lot of diversity or inclusiveness for Boston residents, women, and Black and brown people,” explained Thomas. “I often challenged it because the construction is happening in Boston, and you had people coming from all over to work— Rhode Island, Connecticut, New York, New Hampshire— but there was a huge lack of Boston residents. And they all used the excuse, you know, we don’t have the time to train them. So, I left and started The People’s Academy.”

The organization’s two-year apprenticeship program helps at-risk young adults and formerly incarcerated individuals reentering society develop a skilled trade through hands-on learning, making them employable, connecting them with union jobs, and laying the framework for their own entrepreneurial opportunities.

Incentivizing nonviolence is a central tenet of the organization; in the third-floor office space, a copper plate with the words “Trades not Triggers” displays the unofficial TPA motto. Thomas contrasted his organization’s style of addressing gun violence with that of the judicial system. 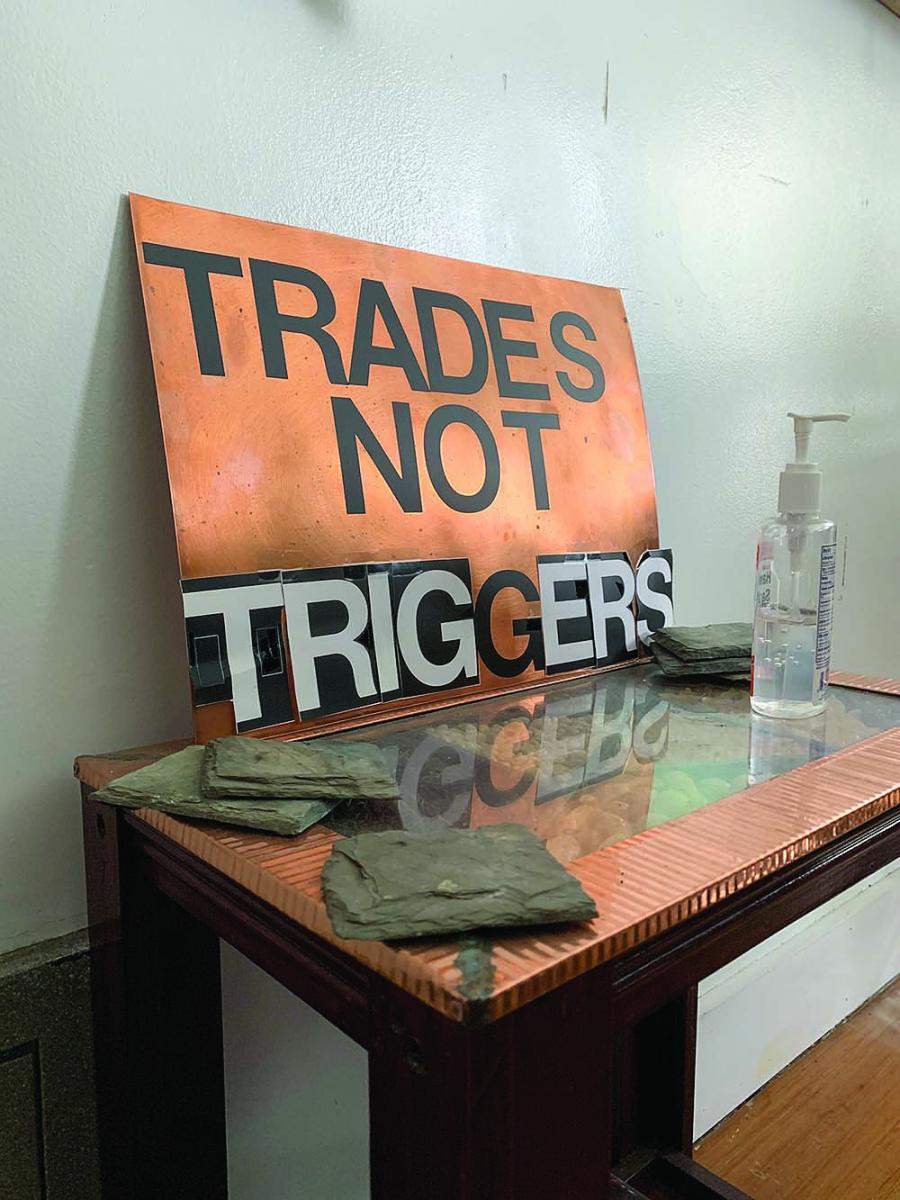 “TPA is a proactive approach; they have a reactive approach...every time there’s an incident that happens, it costs taxpayers money, it costs the families grief, it’s a negative effect. But if they work with The People’s Academy, they become employable, they have no time to run around and do whatever, plus they’re rebuilding the infrastructure. It’s a win-win.”

TPA normally trains about 30 students a year, but that number has dropped this year due to COVID safety measures and scant resources. The Academy operates on thin margins that have been squeezed even further by the pandemic and the ensuing economic crisis. Most of the program’s budget comes from contract work done on construction sites around the region, so when those jobs were cut off, so was their revenue.

“This program is self-funded,” explained Thomas. “With the virus, it made it even worse because the very few projects we were doing got shut down. We weren’t receiving any of this federal, state, city funding, so for us we’re struggling financially to carry this program...Here is something that would contribute to the economy, to the infrastructure, and it’s not getting the help it deserves.” 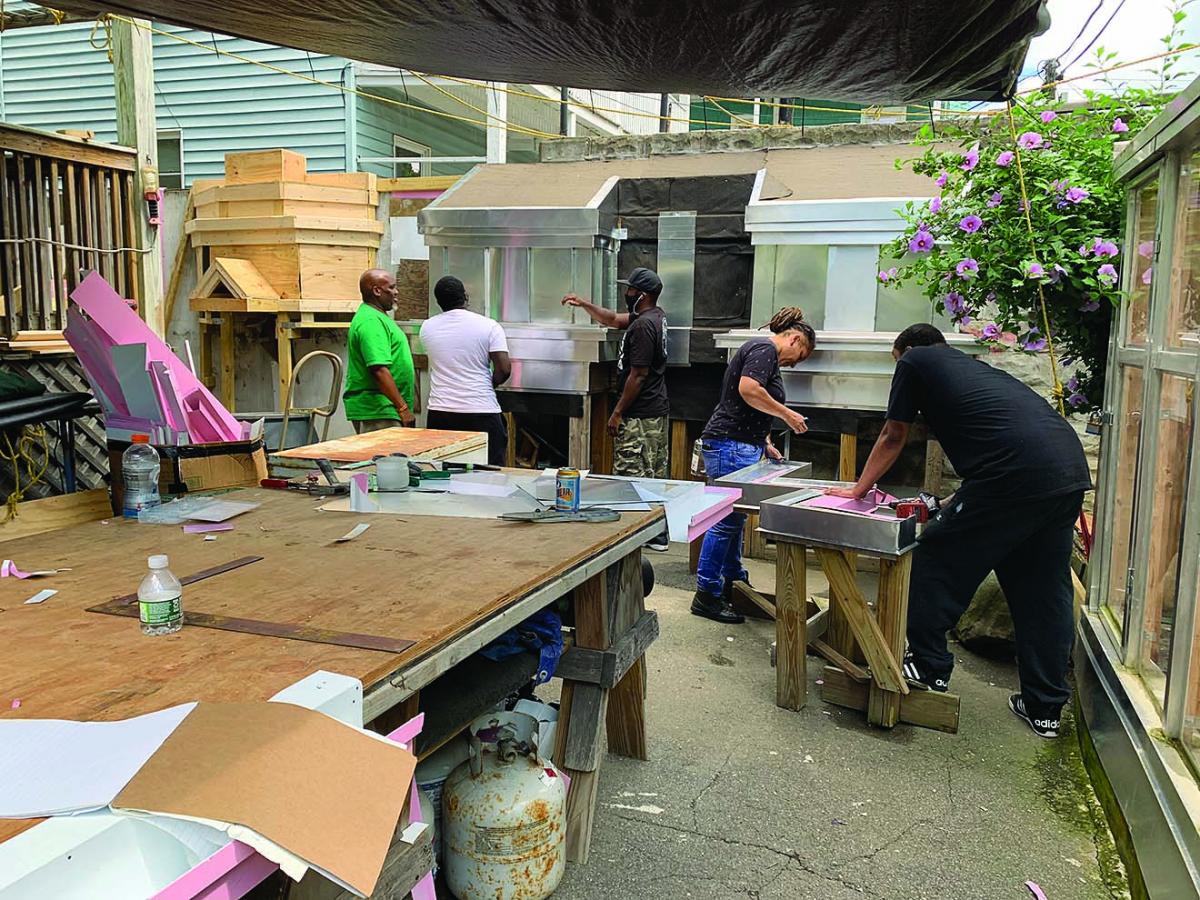 TPA apprentices learn the trade in an Uphams Corner backyard.

While funding is scarce, a recent boost from City Realty Group — in the form of a donation of several new Chromebooks— will provide crucial technology to help TPA apprentices in the educational portion of the program.

“Adding the technology component will be huge,” said TPA executive director Tanisha Stephney, in that it will allow students to draft blueprints, use architectural software, and analyze construction plans ahead of a job.

She added: “The connection that we made with City Realty is very powerful and a huge component of where TPA is needing to go. They connect us to properties and contracts built around the copper trade.”

In general, TPA is well connected with the metal, electrical, and carpentry union network in Dorchester. Thomas noted that in 2018, 43 of 50 apprentices accepted to IBEW Local 103’s electrical apprenticeship program came from TPA. The Academy’s imprint can be seen in copper work at South Bay Center and the State House, as well as in construction projects from Brookline to Cape Cod, and as far away as New Hampshire and Maine.

Still, the organization’s local ties to the neighborhood are visible— and often deeply personal. Many of the men and women in Thomas’s program are from the blocks right around the current TPA headquarters (Thomas hopes to one day move the organization to a site at Quincy and Warren streets in Roxbury, a space pending city approval that would let TPA house live-in apprentices and manufacture metal for nearby companies).

Paul Francis, 29, grew up nearby in Uphams Corner, where he caught Thomas’s eye at a young age. “He noticed that someone like me needed attention and needed something to occupy my time positively,” said Francis. “So, he’d have me do stuff around the house, wash his car, stuff like that. Once I got of age, he brought me onto a job site...it changed my life,” he said. Thomas taught him discipline, how to be punctual, and how to improvise, noting that in the metalworking field “if there’s not a way, you got to make a way.”

Working a trade is diversionary by nature, added Francis. “It keeps you busy, keeps you away from the streets.” 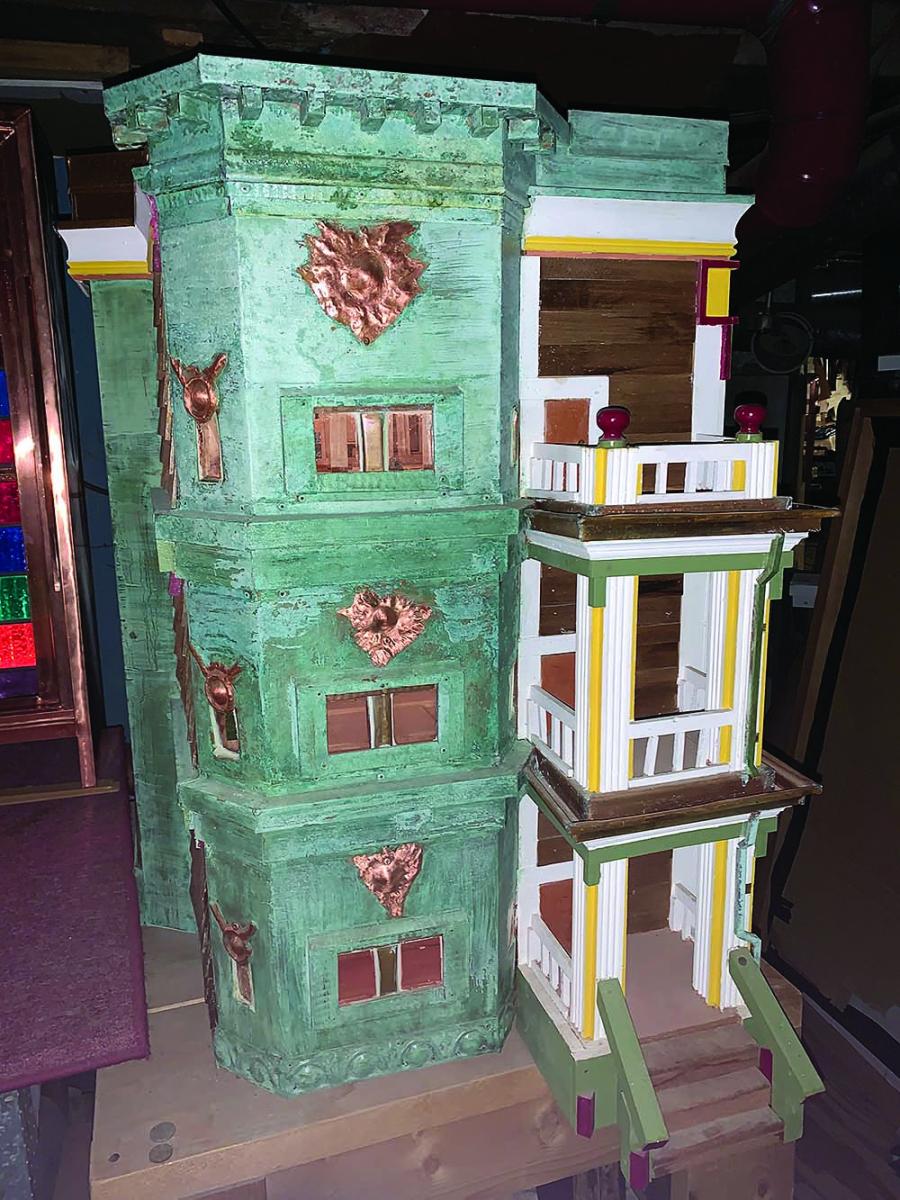 For kids in the neighborhood without a diversion or a mentor like Thomas, the consequences can sometimes be deadly. In recent years, TPA has conducted copper leaf workshops in which family members of victims of gun violence are invited to create copper leaves in memory of those who have died.

“It lets community members learn about copper and create something that represents someone they love,” explained Stephney.

The copper leaf structures, Stephney and Thomas suggested, could replace makeshift memorials that sprout at the sites of homicides around the city, which can sometimes leave behind broken glass or revive painful memories and, in turn, incite further violence.

A model of the copper tree hangs in the workshop in Thomas’s basement, alongside a copper model three-decker and copper-paneled light displays honoring victims of Covid-19 that the mayor has agreed to place on display as a memorial at City Hall at some point in the near future. 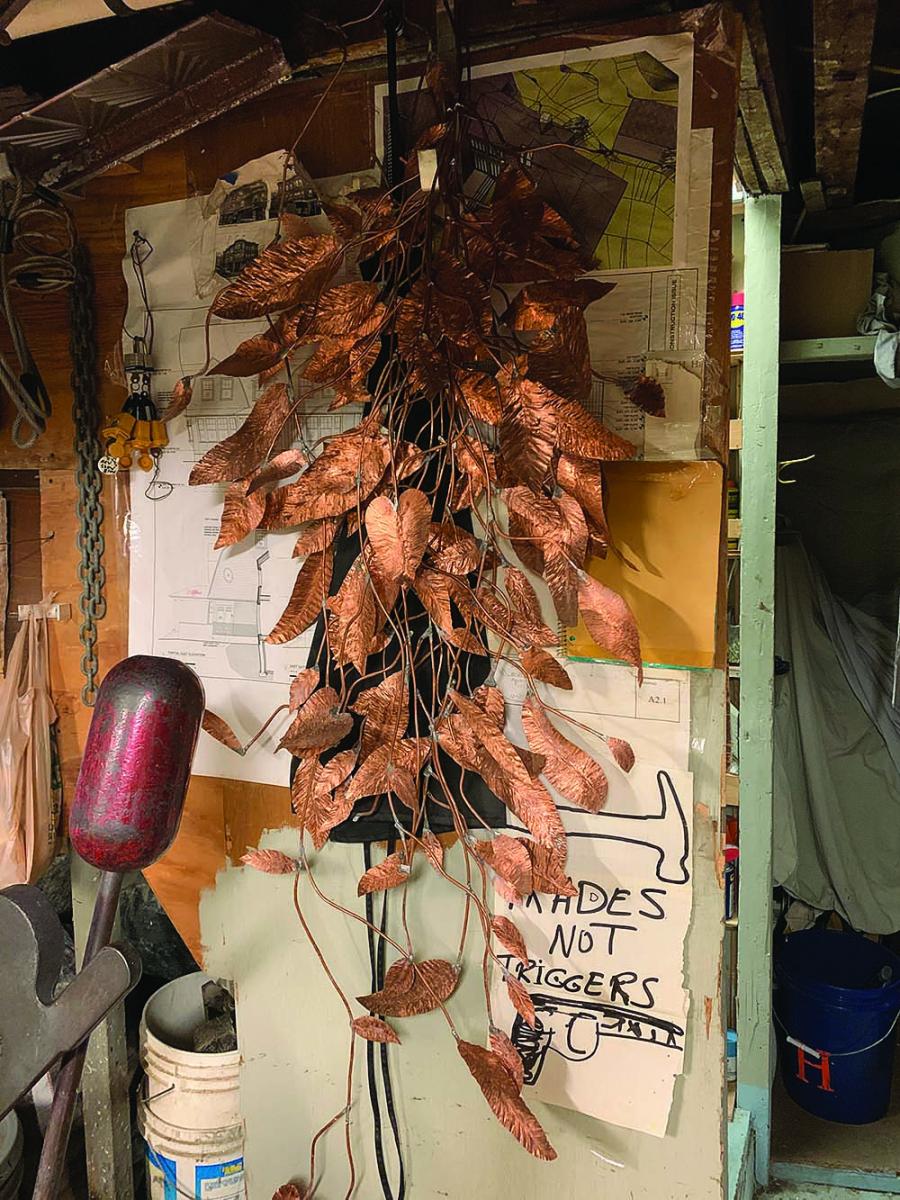 TPA apprentices say that Thomas’s artistry has rubbed off on them, even when it comes to more utilitarian work at construction sites. Working with their hands to create something tangible, and having a final product they can point to and be proud of, is meaningful in and of itself.

Shaun Andrade, 36, joined the program in 2017 after leaving a low-level job at Stop & Shop. “There was no skill to it, just moving cans and putting them back, nothing I wanted to do. Now I know a skill, I enjoy doing it, and I love talking about it, you know, telling my son about what I build or the things I’ve done. It just puts you in a different mindset.”

That change in mentality is the first step on a path to a better life, said Andrade, but for it to happen, a person needs first to be given a chance.

“Once you have a mindset of wanting to do better, you have to be willing to learn, willing to change. A lot of people have hidden talents that they don’t even know about because opportunities like this were never presented to them.”

To learn more about The People's Academy, visit peoplesacademyinc.org