Some 200 people logged on to a virtual meeting last Wed., Dec. 2 as the principals from Accordia Partners LLC delved into economic impacts and housing affordability specifics for their massive Dorchester Bay City development along the Columbia Point waterfront and later engaged in a question-and-answer segment with those who took part in the session.

This was the last in a five-part public engagement series, hosted by the Boston Planning and Development Agency (BPDA), that was set up to review elements of Accordia’s plans to transform the 34-acre site into a new community with a mix of housing, retail, and public space.

“We believe that a job to afford a home to rent or own and build wealth with plus the improved infrastructure to enhance access amounts to inclusion,” said Richard Galvin, one of the two principals at Accordia with Kirk Sykes.  “All three of those things are an important part of what you have heard us call the three-legged stool. The plan is to work creatively in partnership with the city’s Neighborhood Jobs Trust, using job linkage to train workers to be ready for employment in the future.”

Taking noted of his position as the former chairman of the Boston Federal Bank, the organization that commissioned the Color of Wealth in Boston Report, Sykes told attendees that the team intends to use Dorchester Bay City as a platform to combat the racial wealth gap, adding that closing the racial wealth gap “needs to be at the cornerstone of everything we do.”

The Color of Wealth report is commonly cited for revealing the gap with its finding that the average net worth of white families in Boston amounts to $247,500, while the net worth of Black families is just $8.

“We believe that Dorchester Bay City could be the platform for attacking that problem in South Boston and Dorchester through jobs, housing, and economic development,” he said.

The entire project could yield as much as $245 million in lease payments to UMass Boston, which owns the land being developed. Sykes and Galvin estimates the project will account for 25,000 construction and 15,000 permanent jobs, for which, Sykes said, the team “intends to reach out into the neighborhood, train for, recruit, and create contract opportunities and engage folks like everyone on this call.”

They dubbed their economic development strategy “the ramp” of access and inclusion, which they said would start when permitting begins.
“We’re starting now to help people get ready a year-and-a-half-away from any construction starting and more than three-and-a-half years before anybody would be occupying the buildings,” said Sykes.

Commercial space makes up about 75 percent of the 18-block site, with the remaining 25 percent allowing for residential buildings with 1,740 units. The team aims to fill the 155,000 square feet of ground floor retail, restaurant, and civic space with local business owners who could provide affordable options.

“We want to open up a discussion about affordable retail,” said Galvin. “We know one of the big challenges—especially today— for any small business or restaurant owner is finding low-cost retail space to attract local vendors and operators.” He added that the developers will work with the Community Advisory Committee to develop a “game plan … whether it’s lower rent, a lot of TI (tenant improvement) packages, or some combination thereof to get local vendors and restaurants into their space from South Boston, Dorchester and other neighboring communities.” 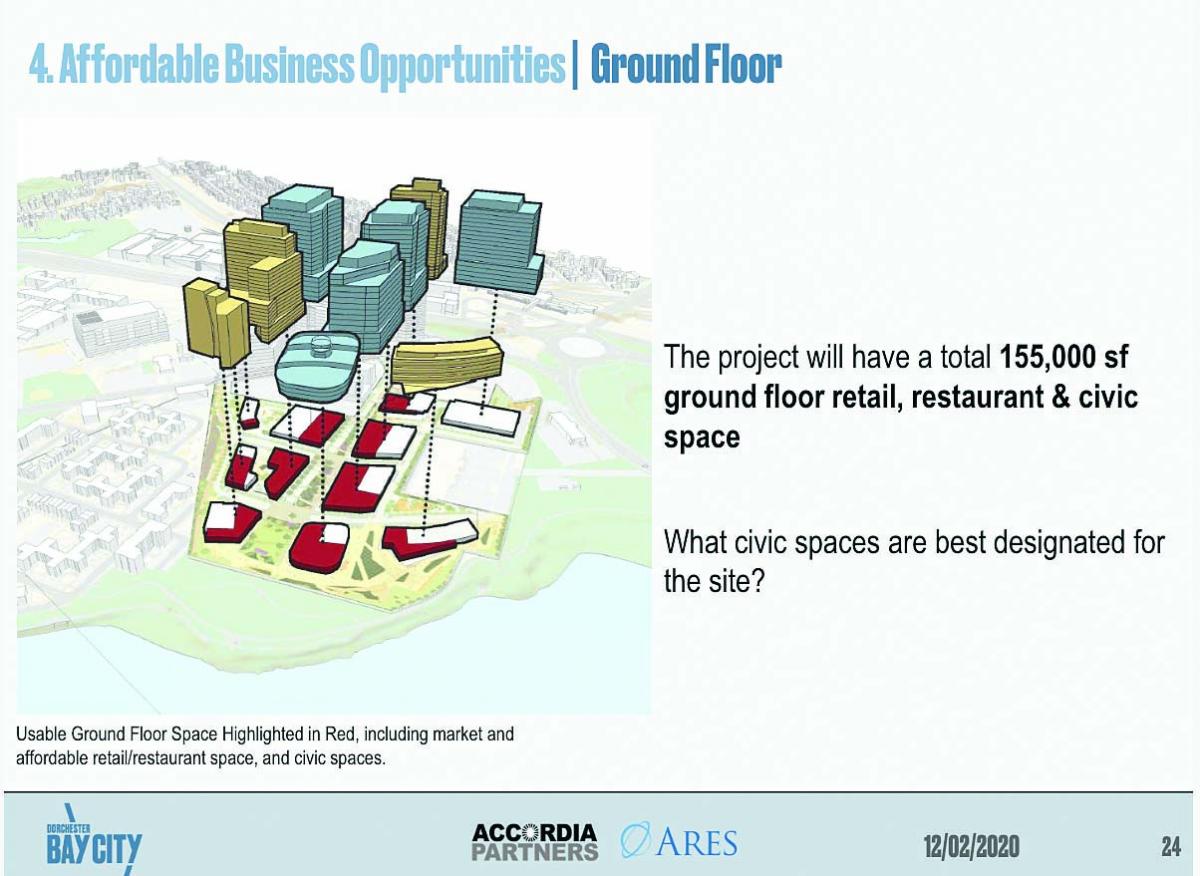 The developers discussed their plans to include broad-based affordability within the new neighborhood by exceeding the number of units required by Boston’s Inclusive Development Policy (IDP), which stipulates that developers of projects with ten or more units support the creation of income-restricted or “affordable” housing.

Under the current formula, Accordia must set aside 226 affordable units at 70 percent Area Median Income (AMI). The developers say they will pledge 261 units at 60 percent AMI. And while the city requires that Accordia pay $32.9 million into funding off-site housing, the team proposes to pay $56.4 million.

Rental limits for affordable units could range anywhere from $455 to $1,125 a month for a studio and $652 to $1,672 for a three-bedroom unit. Accordia also proposes to pay 100 percent of the housing linkage— which amounts to $10 million— when they receive a building permit, instead of paying it over several years after occupancy.

Galvin said they hope “to attack the displacement issues by getting housing built sooner,” roughly 24-26 months before Accordia would be required to pay the off-site money. They intend to work with the Dorchester-based Massachusetts Affordable Housing Association (MAHA) and other organizations to focus those funds on creating homeownership in South Boston and Dorchester.

“We want to turbo-charge [MAHA’s first-time homebuyer program] with this money and use various financing strategies that are currently available to create and preserve more than 500 homes in the area neighborhoods, but, more importantly, to help people buy a first home and start to create wealth,” said Galvin. 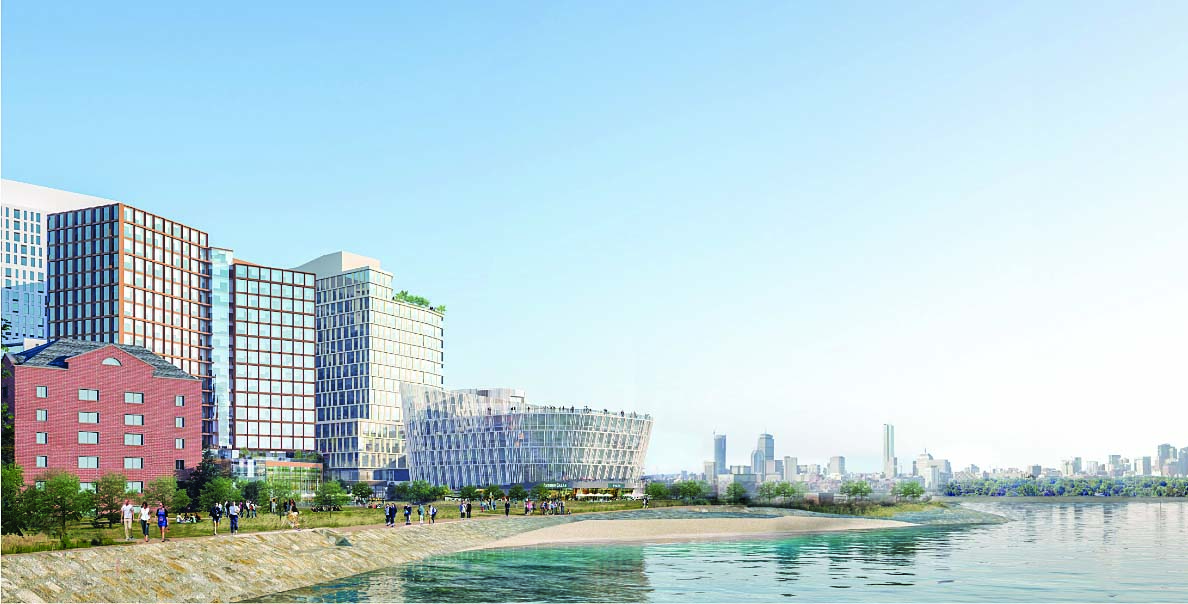 During the public comment session, which lasted about two hours, several people praised the team’s affordability plan. Symone Crawford, the director of homeownership education at MAHA, offered background context to the plans to support affordable homeownership.

“Last January, MAHA members developed a proposal for investment in affordable homeownership and first-generation homebuyers and presented it to Accordia. Since then, we have discussed this massive development and the need for increased development impact fees or linkage,” she said.

“We have engaged over 250 community members in three meetings with Accordia over the last 10 months and the result of this organizing is that we have a verbal commitment from Accordia to pay linkage fees as previously discussed – 44 percent above the city’s requirements – on the state-owned Bayside site even though that’s not required, and to pay up front as each building is permitted rather than within 8 years and to pay higher linkage fees on any building permitted after the city raises the requirement above 13 percent.

This funding could provide hundreds of affordable homes for first-time homebuyers with household incomes between $50,000 and $100,000. Crawford added that their oral agreement still must be put in writing, in the form of a memorandum of understanding with MAHA.

Fatima Ali-Salaam, chair of the Greater Mattapan Neighborhood Council, asked where anti-displacement funds would be deposited and suggested that they could be spread out among community banks. “You spoke about equity capital, and for banks, for every $11 deposited, $1 goes into the equity capital fund,” she said. “In order to have a real impact in any community, especially one like Dorchester, which has a majority low to moderate income residents, how is that money going to be circulated?” she asked.

Sykes called the suggestion a “great idea. I think we have the interest in aligning ourselves with the people who can leverage what we can provide…Whoever can align themselves with creating homeownership in the surrounding neighborhoods would be a great partner and we’re more than happy to consider diverse, local partners,” he said.

Lori Hurlebaus, a Dorchester resident, called the city’s current IDP formula “woefully inadequate” and asked if Accordia would adjust its own plans if the mandated policy is changed. Galvin replied that Accordia would “do what’s on the books” and adjust their IDP if the city’s policy adds increases.

Hurlebaus also had a question about Accordia’s commitment to an anti-displacement fund: “This land is leased for 99 years… is the $10 million going to happen once?”

Aisling Kerr, BPDA project manager, explained that the review process for Dorchester Bay City is only in its first phase. “The DBC is a large project, so it necessitates the formation of an IAG (Impact Advisory Group) and requires a multi-phased review. We’re in phase one right now, which is being held in connection with the submission of the Project Notification Form (PNF),” she said.  “We’ve gathered a whole lot of comments and feedback, and we’ll take all of that and package it all into a Scoping Determination. Everything we’re hearing and all of the comments become a part of that packet, which will shape the project going forward.”

Up next: The BPDA will review and compile the comments and suggestions from the series events in its scoping determination, and Accordia will be required to submit a scoping determination and filing of a draft project impact report, all of which will kick off another series of public meetings.

A community member get detail hunting at the meeting

Quite a few of those who engaged in last Wednesday’s informational session had specific concerns. One of them, Markeisha Moore, engaged in a substantive back-and-forth with Accordia developers Richard Galvin and Kirk Dykes on affordability and job accessibility for community residents.

Moore: “I just want to be clear. At 60 percent AMI, a household of one person has to be making $50,000 a year, and that is well above what more than half of the people who live in this community make. You haven’t really touched on the makeup of the units, and if you’re building for the people in this community, there would have to be family sizes.”

Galvin: “Part of the conversation going forward as to what is the right mix — typically, they replicate what the overall mix of the market-rate units are, but we aren’t there yet in terms of unit breakdowns and size.”

Moore: “When do you think you will be there? Are you starting this project with the inclusion of neighborhood input or are you planning on starting this project with a lot of ‘let’s see what happens’ because we’ve already had those— with Seaport, with Kendall. For a project of this size, I would think that when you come into it you would be very clear on what’s going to happen and what you’re going to do. That’s a lot of money and displacement to be put on ‘let’s see what happens.’ The community needs to be reassured.”

Galvin: “Details regarding specific unit sizes would come before any building could start.”

Moore: “We don’t only need to have the construction and maintenance jobs. We need to be a part of it, and have those long-term tech jobs, and whatever you have to do to invest in our students and the people in this community to be able to attain those jobs and keep them and afford to be in those apartments. Then people will know this is for our community and that you’re not building this for people who are going to come in from outside, out-price us, live there, and then out-price us in the surrounding communities because they have the tech jobs. We can’t compete with those people who will be looking for housing. There’s not going to be enough on that site.”

Sykes: “We very much agree with you and we are committed to putting the job training in place at all levels. We’ve already started doing the outreach for those permanent higher paying jobs to help figure out how to do that training and include local residents.”

Get the Dorchester Reporter— the paper of record for Boston’s largest and most diverse neighborhood—delivered to your door for just $50 per year.

That's 52 weeks of the Dorchester Reporter delivered by USPS for just $50.