Exclusionary zoning practices and a tightening housing market are contributing to regional pressures on vulnerable populations in Greater Boston, a new Boston Foundation report lays out. Historically affordable neighborhoods like Dorchester and Roxbury are quickly becoming more expensive, though they still include higher proportions of the city’s foreclosures and greater concentrations of poverty.

The Boston Foundation released its 16th annual Greater Boston Housing Report Card in late June, a collaboration with Northeastern’s Dukakis Center for Urban and Regional Policy, the Massachusetts Housing Partnership Center for Housing Data, and UMass’ Donahue Institute. It grades all 147 cities and towns in Massachusetts.

Greater Boston as a whole is riding a period of strong post-recession recovery and growth, the report’s authors note.

“Yet to some extent Greater Boston has become—not for the first time—the victim of its own success,” they say. “Having failed to produce an adequate supply of housing for decades, the region is not prepared to accommodate the population growth that is being propelled by the current economic boom.”

It is resulting in increased demographic and economic segregation and housing strains, made worse by a strong history of local control over zoning, which can stymie efforts to boost affordable housing supply depending on the particular municipality. Metropolitan Boston is now the fourth most expensive homeownership market of the 25 largest metropolitan areas in the U.S. and the third highest rental market in the country, higher even than Metropolitan New York.

“What might be surprising is just how expensive some historically affordable neighborhoods have become,” the report’s authors write. Median two-bedroom rents in neighborhoods like Chinatown and Back Bay are predictably expensive – around or over $4,000 – but Dorchester and Roxbury are now at $2,000 a month. 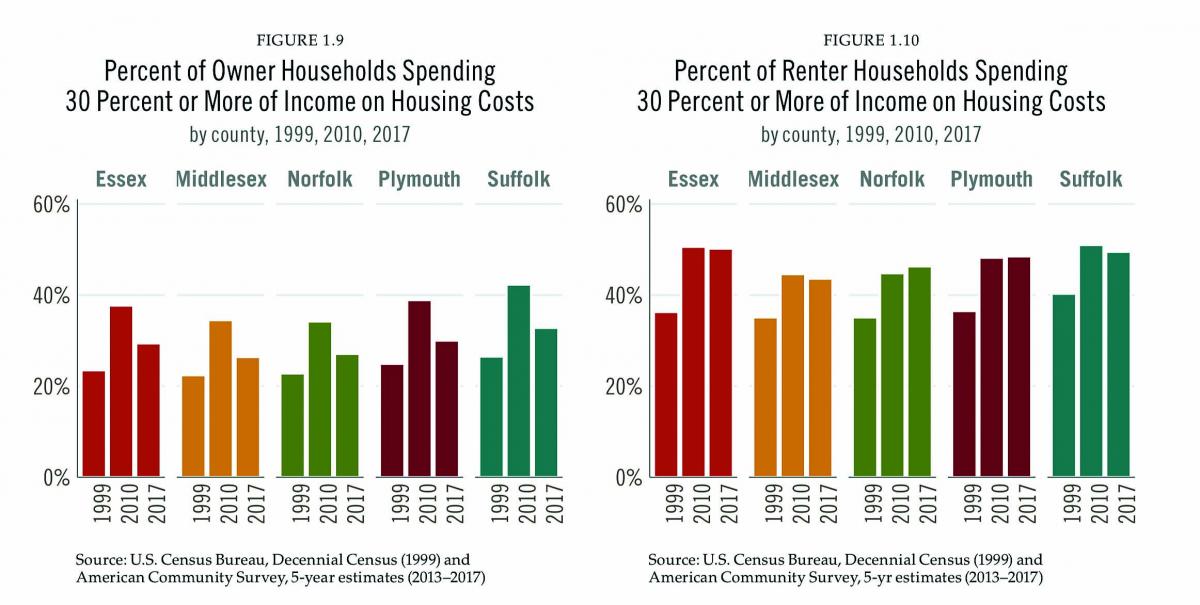 Boston in particular is carrying a heavy housing load for the region, the report notes. More than 43 percent of the multifamily housing permitted in the state over the last five years was in the city of Boston.

Even if the permitting stays on pace, the report states, Gov. Charlie Baker’s 135,000 unit goal will be insufficient for projected growth. The number of homeless families in Greater Boston increased by 27 percent and the number of homeless individuals by 45 percent in the last decade, according to the report, with a spike in 2018 driven by displaced residents of Puerto Rico.

Displacement concerns haunt the region, though foreclosures have dropped by two-thirds in Greater Boston since the recession. Foreclosures and tenant evictions, however, are still concentrated in some Gateway Cities including Lawrence, Lowell, Haverhill, and Brockton, and in Boston neighborhoods including Dorchester, Roxbury, and Mattapan.

The suburban/urban divide is also compounded by a transit divide, with fewer units permitted in areas without public transit.

“Multifamily development is increasingly concentrated in cities and towns served by the MBTA subway system but not in communities served by MBTA commuter rail, where stations are typically surrounded by low density housing,” according to the report.

“Generally, this shift in housing development patterns appears aligned with state and regional policy goals,” the report notes. “While new housing and a diverse mix of housing is needed in all Greater Boston communities, an emphasis on transit-oriented locations is more sustainable, takes better advantage of existing transit infrastructure, reduces traffic impacts, and lowers transportation costs for new residents.”

Boston checks off all six. Some are relatively new moves, like expanding a pilot ADU program that ran from 2017 to spring 2019 in Jamaica Plain, Greater Mattapan and East Boston Neighborhood Districts. The majority of pilot applicants for ADUs, which let homeowners build out additional smaller units on their property, were for basement conversions.

More than one third of all “racially and ethnically-concentrated areas of poverty” are in Suffolk County, primarily in neighborhoods like Dorchester and Roxbury. Reducing segregation goes hand in hand with permitting more housing units, the report states, but the right mix of housing types is critical. 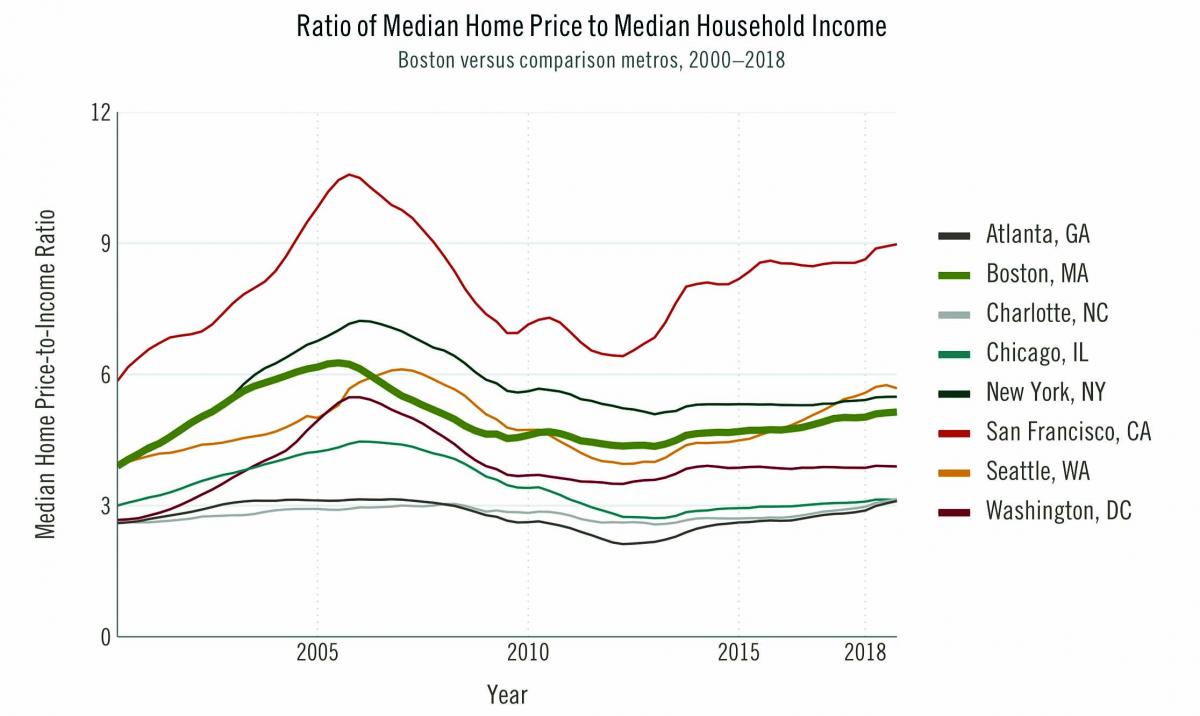 “Simply building more units without considering the type or affordability is unlikely to reduce segregation,” the authors write.

The report recommended steps for the state legislature, such as requiring multi-family zoning for areas suited for high-density housing like transit hubs or neighborhood centers and allowing multi-family housing types in all single-family zones.

It also recommends laws “penalizing frivolous appeals of local approvals to build new housing where the appeals are simply a delay tactic that raise no significant issues of law or fact.”

Outside of legislation, the Greater Boston report recommends increasing resources for pro-housing groups and education about the value of building denser housing supply.

“For most of the last century Greater Boston has been a national leader in addressing the housing needs of its residents,” the report concludes. “As much as has been accomplished, this Report Card illustrates that serious challenges remain and that new ones have emerged. The need for strong civic leadership on housing is as great as ever.”