Ann Wessmann: An exhibit “about what we pay attention to.” Dan Sheehan photo

Over the years, the artist Ann Wessmann has developed a special relationship with the Linden tree that stands in a school yard just behind her Dorchester home. Leaves and leaf bracts from the tree blow into Wessmann’s yard on Pope’s Hill on a regular basis, a reality that inspired her to use the natural material to create a work of art, which she titled “Homage to the Linden Tree.”

The piece is one of several “homages” to trees in Wessmann’s new installation, “Gathering: An Homage,” currently on display at Kingston Gallery in the South End.

Wessmann explained in an interview that the name of the collection reflects the process by which she collected materials for each piece.

“I’ve been doing this for a long time,” she said, referring to her habit of collecting fallen leaves, pine cones, seeds, and other debris, which she calls “important but generally overlooked and discarded materials.”

“This exhibition has to with the beauty of the object, but also it’s about what we pay attention to and what we don’t, and what happens when we do pay attention and how rewarding that can be.”

For her “Homage to the Linden Tree,” Wessmann tied hundreds of fallen leaves and seeds to strands of linen thread to create a natural curtain that contains the viewer on three sides. Standing amid the piece, the viewer feels a sensation of falling; the leaves stir with every slight breeze of air, forming a living, breathing structure. 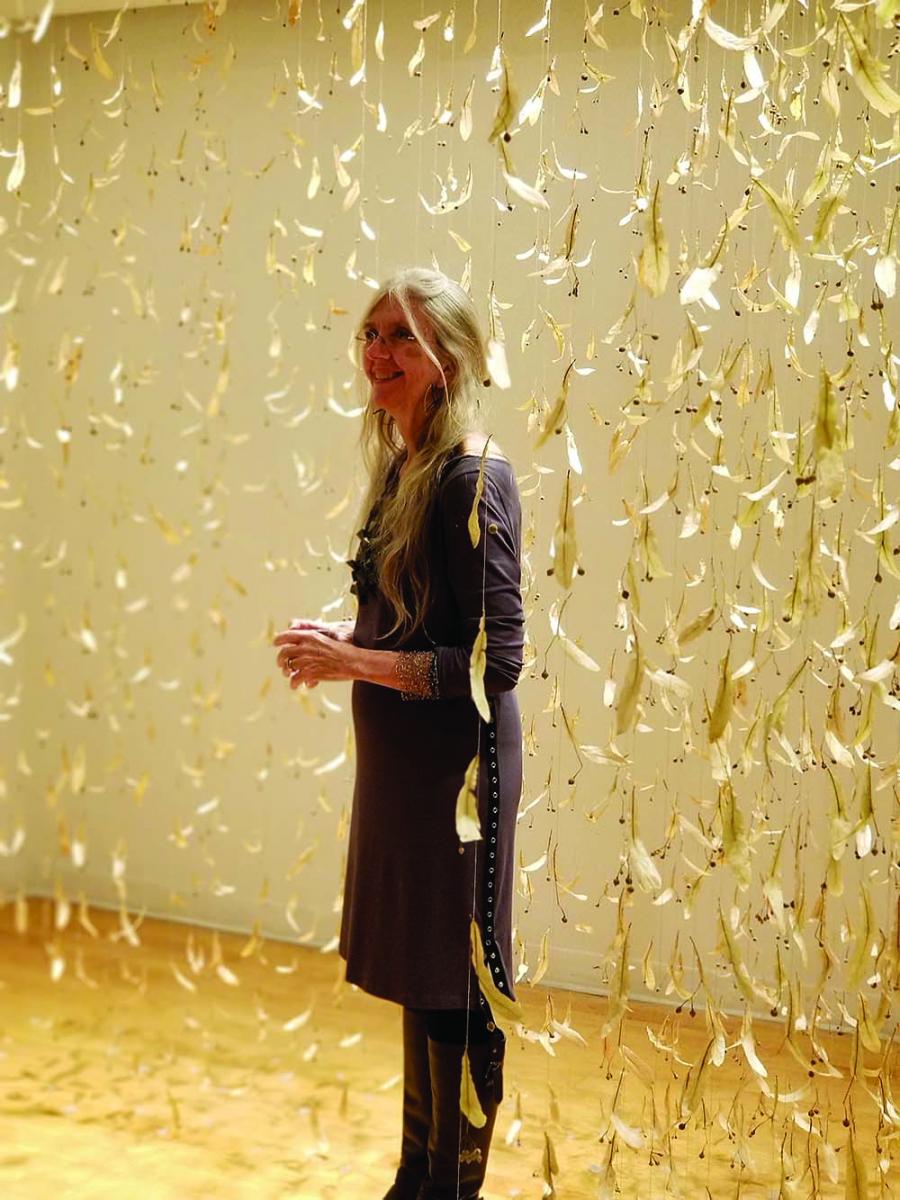 “With [Homage], I was interested in creating a peaceful environment,” she said. “It wound up being almost architectural.”

Wessmann’s artistic process is often slow and painstaking, requiring hours of harvesting materials from her backyard and elsewhere. For a sister piece to “Homage,” she boiled leaves from the linden tree in water and sodium carbonate and then “skeletonized” them by scraping them with a toothbrush until the dead plant matter flaked away, leaving delicate, ghostly outlines of leaves in their place.

For another piece, she arranged hundreds of horse chestnut tree twigs in an elaborate lattice-like pattern that forms the shape of a rectangle on the gallery wall. Installing the piece took nine hours, she said.

“It really makes me appreciate the material,” she said, noting that the arrangement of the twigs resembles a type of calligraphy. “You get to experience it in different ways if you observe from afar and then go look at them up close.” 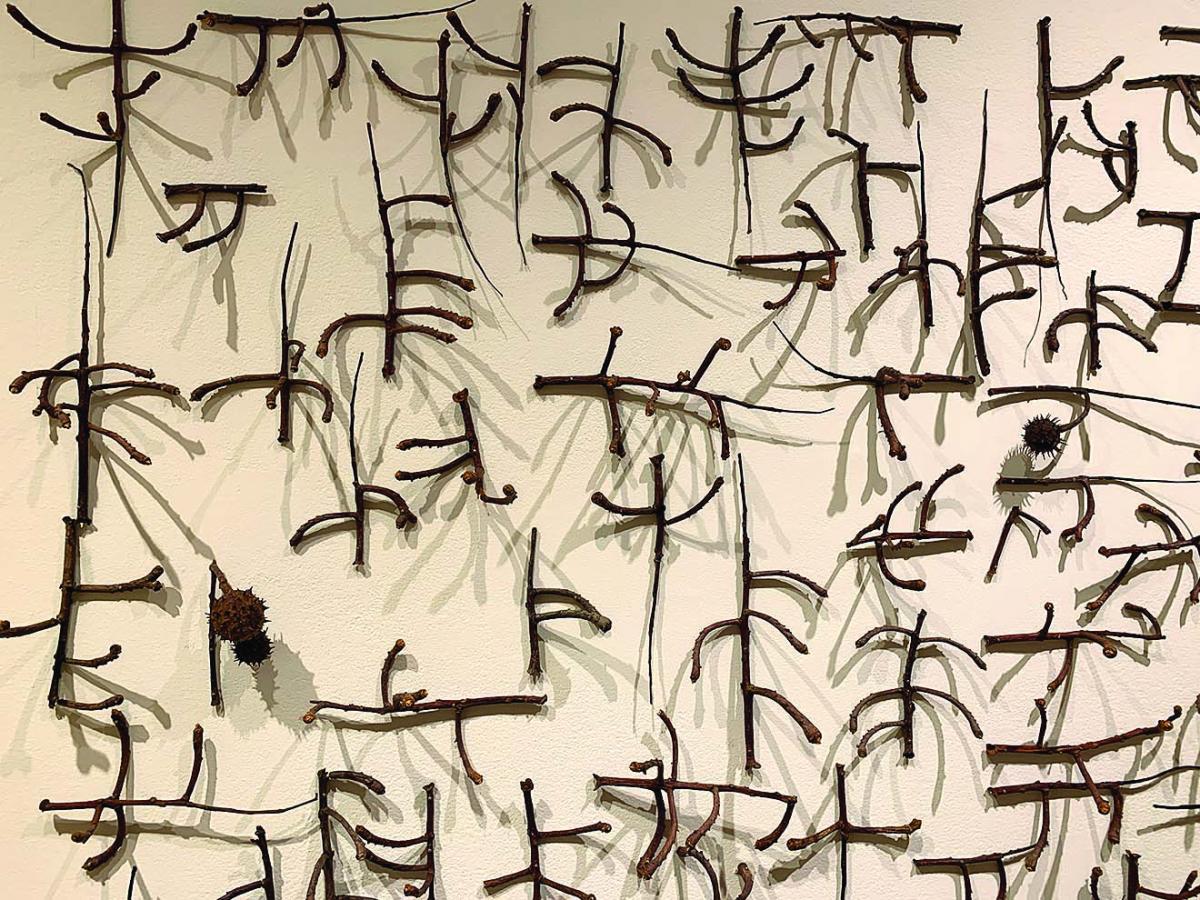 The twigs come from a pair of trees that stood for years in the yard of Wessmann’s childhood home in Scituate. An adjacent piece puts to use fragments of fallen horse chestnuts – some of them decades old – from the same tree to form vertical bead-like columns. The two works hold special sentimental value because of their origins, said Wessmann, who explained that the trees in Scituate have been a part of her life for nearly 67 years. They also serve as a memorial for one of the trees, which after many years of decline died a couple of years ago. 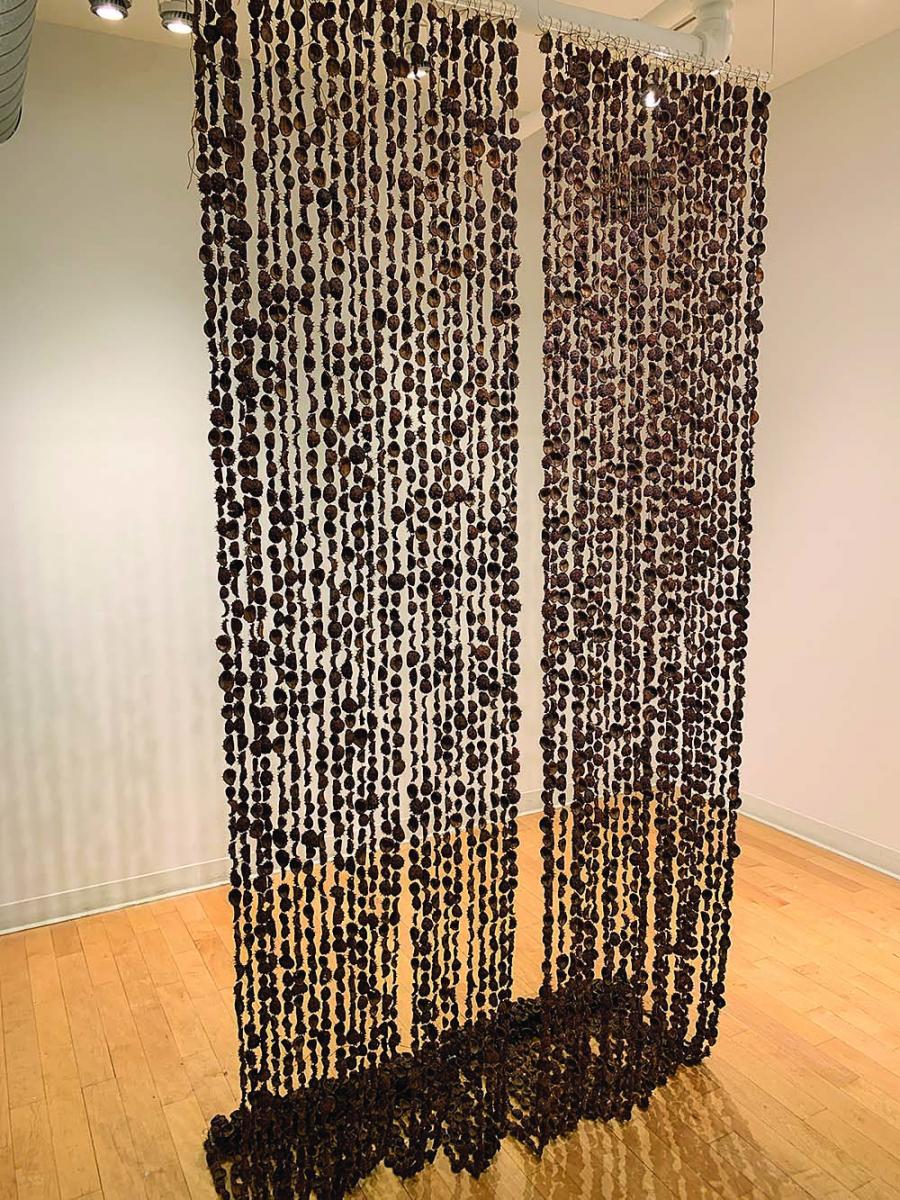 “I’m drawn to trees,” she said, “because they’re living, and changing as we are, going through the same life cycles. “A lot of events took place under that tree –wedding receptions, my grandparents’ 50th anniversary party. There are so many memories tied to that tree.”

Gathering: An Homage is on display in Kingston Gallery at SoWa Market through Dec. 1. Gallery hours are noon to 5 p.m. Wednesday through Sunday, or by appointment.