A rendering of the redesigned Codman Square Park of the future. Image courtesy Urban Culture Institute.

An upgrade is in the works for Codman Square Park, and after a presentation by the design team Tuesday evening in Codman Academy’s black box theater, residents in the neighborhood have a better idea of what that vision might look like.

Over the past few years, the Codman Square Neighborhood Council and the Urban Culture Institute have spearheaded efforts to redesign the small park at the corner of Washington and Talbot Street. Now, after digesting feedback from the community and handpicking a design team, they are one step closer to a finalized plan. In an interview with the Reporter, Cynthia Loesch-Johnson of the Codman Square Neighborhood Council explained that the impending redesign is a continuation of a process that began years ago.

“The CSNC was instrumental in establishing that space as a park in the first place back in the 80s,” said Loesch-Johnson. “Back then having green space in general was exciting. Today, it’s wonderful to have but it’s not utilized as much as it should or could be.”

While the park plays host to a weekly farmer’s market in the warmer months, it sees little other programming throughout the year. Community activists hope a fresh look and a more welcoming layout will inject some life into the patch of greenery.

“The goal of this redesign is to reactivate the space,” said Loesch-Johnson, who described the process to make the park more intergenerational and interactive as “collaborative” and “inclusive”. “Young people are involved, Pastor Victor Price and the Second Church are involved, even the people that, you know, there’s sometimes some negative activity happening in the park, but those people use it regularly, so it’s open to them, too. Anyone who uses the park has been a part of the process.”

After a nationwide appeal to artists, Dorchester native Destiny Palmer was selected out of 130 applicants for her proposal. In her final design laid out in Tuesday's presentation, Palmer included several features intended to make the park more dynamic, including a live performance stage, an array of low sculpted walls that double as seating areas, and a widened, colorfully patterned walkway that would serve as home base for the park's farmer's market. 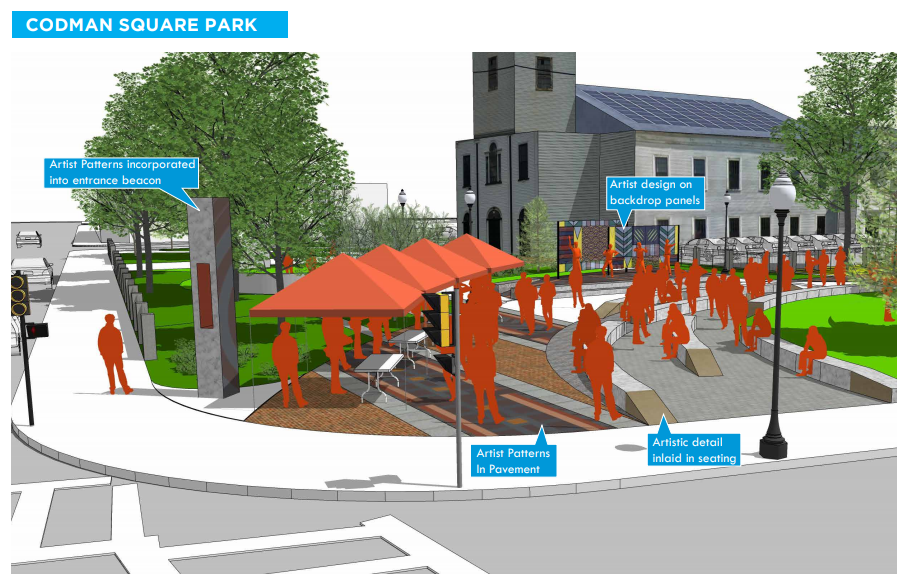 A ground level view of the park from the corner of Washington and Talbot Street.

On the walkway and on backdrop panels for the stage, Palmer incorporated cultural patterns reflective of the various peoples that have settled in Dorchester over the years to form a holistic "Codman Square Pattern," one that features a traditional Irish quilting pattern, a West African mudcloth design, traditional Vietnamese red patterns, South American quilt designs, Neponset Indian bead work, and a Puritan floral pattern, among others. 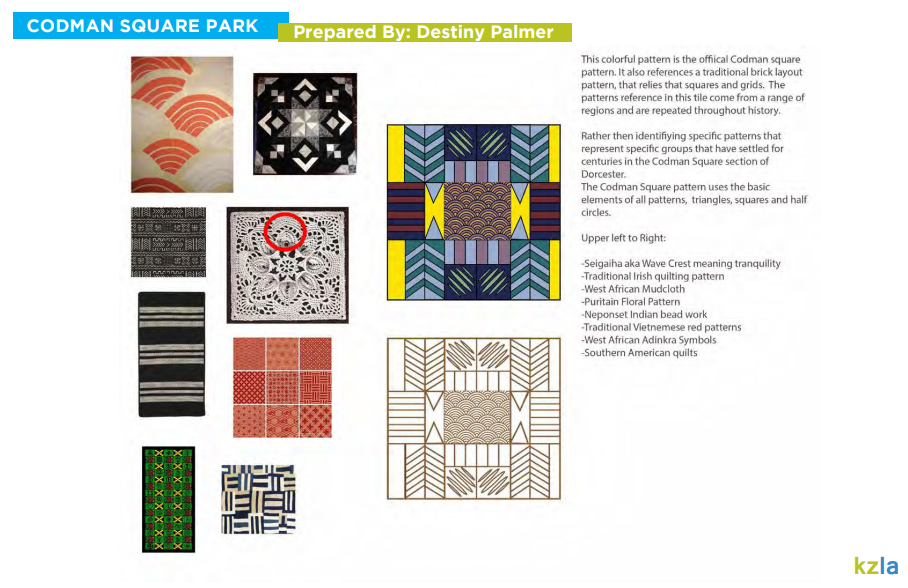 Christina Lanzl of the Urban Culture Institute explained that, while the selection process was difficult, Palmer eventually won out because of her creative vision and strong connections to the community.

“We wanted a feature or element where we had an integral part of the landscape design that offers a sense of place and is specific to our neighborhood,” said Lanzl, emphasizing the much-needed pop of color that Palmer’s proposal would provide.

The CSNC then tapped Boston-based landscape architect Kyle Zick as the second half of the design team, largely due to his past experience revamping area parks.

“His firm did Adams Park in Roslindale, which is a park that’s very similar to us. One of its big uses is a farmer’s market, and it’s also kind of an awkward, narrow space. But he did a great job with it,” said Loesch-Johnson.

Once the finalized design plans are approved, next steps in the process will mostly be structured around acquiring funding. The project has already received a pledge from the City of Boston's Edward Ingersoll Browne Trust, but will need to do a good deal of fundraising to match those funds going forward. The neighborhood is likely still a year or two away from the realization of a redesign, but Loesch-Johnson says she is encouraged by the energy already surrounding the project.

“The park is so centrally located and it will really transform our neighborhood, and it really needs the love and attention it hasn’t gotten since the 80s,” noted Loesch-Johnson. “So, to me it’s a no-brainer.”

You can see the full redesign presentation here. For more information or to volunteer for the redesign project, contact csncouncil@gmail.com or visit urbancultureinstitute.org/codman-square-park.html.