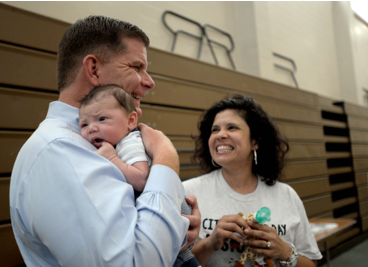 Walsh announced his endorsement of St. Guillen (shown with the mayor in a campaign photo, above) in an e-mail sent out by her campaign.

“When the Trump administration took office and began to carry out their vicious attacks and policies on the immigrant community, Alejandra made sure the Office for Immigrant Advancement would be there to serve all our immigrant neighbors, expand legal services to those who needed them and educate the immigrant community about their rights and how to protect themselves.”

Mayor Walsh said, “I am proud to endorse her candidacy for Boston City Council At-Large, because she leads with compassion and empathy and will always be an advocate to make Boston better for all.”

St. Guillen worked for Walsh's administration prior to jumping into the at-large field.

Essaibi-George, a lifelong Dorchester resident, was elected to the City Council in 2015. As a former Boston Public School teacher and parent, she’s worked as Chair of the Education Committee, addressing students’ social and emotional learning in addition to economic success. She is also Chair of the Homelessness, Mental Health and Recovery Committee, dedicating time to researching methods to address the opioid crisis in Boston.

The Mayor said in a statement: “Annissa goes to work every day fighting for and delivering real results for the residents of Boston. I know that we will all benefit from her continued leadership on the City Council. That’s why I’m proud to support her and why I will be casting my vote for her this election day, September 24.”

Current At-Large City Council seats are occupied by Michael Flaherty, Michelle Wu, Essabi-George and Althea Garrison, who finished fifth in the4 last city election and was elevated to the council when US Rep. Ayanna Pressley resigned to take her seat in Congress last January. An at- large Councillor represents the entire City, while nine district councillors represent specific areas of the City. The 13-member body is elected every two years.