A rendering shows the exterior of the proposed Martin Richard Dorchester Field House, which would be sited on land owned by the Boston Public Schools on Mt. Vernon Street. The $30 million indoor sports and community center would be operated by the Boys and Girls Clubs of Dorchester in partnership with the Martin W. Richard Foundation. Image courtesy RODE Architects

Two well-respected Dorchester institutions have joined forces to plan a new, $30 million indoor sports and community center that would be built on what is now a little-used field next to the McCormack Middle School on Columbia Point. The Boys and Girls Clubs of Dorchester and the Martin W. Richard Foundation submitted their plan for the proposed facility —named the Martin Richard Dorchester Field House— to the Boston Public Schools (BPS) this summer.

The new building, if approved by city officials, would house a turf field for soccer, lacrosse, rugby, football and other sports; an elevated, three-lane running and walking track; a fitness center with locker rooms, classrooms and a nutrition center, along with some open space outside. The building would be managed and programmed by the Boys and Girls Clubs of Dorchester, but would be fully accessible to the Boston Public School students at the neighboring McCormack-Dever campus. The facility would also be open to the larger community, and to adult sports teams, for example, that could rent the space for games and practices when not in use by children and teens.

The project is largely the brainchild of Bill and Denise Richard, who created the Martin Richard Foundation— named for their 8 year-old son who was killed in a terrorist bombing at the Boston Marathon in 2013. They enlisted the Boys and Girls Clubs of Dorchester— led by Bob Scannell and his wife Mary Kinsella— to bring their vision of an indoor recreation facility for city kids in particular to fruition. Together, they have been seeking an appropriate site— ideally in Dorchester— for the past four years.

“This is a space that will bring us together as neighbors for sporting events, birthdays, all sorts of events. It fits our mission of helping kids,” said Bill Richard. “The idea goes back a number of years and it comes from talking to parents here in Dorchester over the years at games and practices for our kids. So many times we’ve been on the sidelines or in the stands and the rain comes we we’d say, ‘We wish we had something indoors like they have in the suburban towns.”

“Dorchester deserves this facility,” said Scannell, who has led the BGCD for 35 years and supervises two campuses— one on Dorchester Avenue and a second in the Harbor Point development, right across the street from the proposed Martin Richard Dorchester Field House. “There is nothing like this in the city of Boston.”

In their response submitted to the BPS in July, Richard and Scannell added: “The vision for the [field house] is to create an inclusive, welcoming space unprecedented in the Dorchester community and indeed in the city as a whole… The [Field House] will be a symbol of inclusion to all of Boston.” 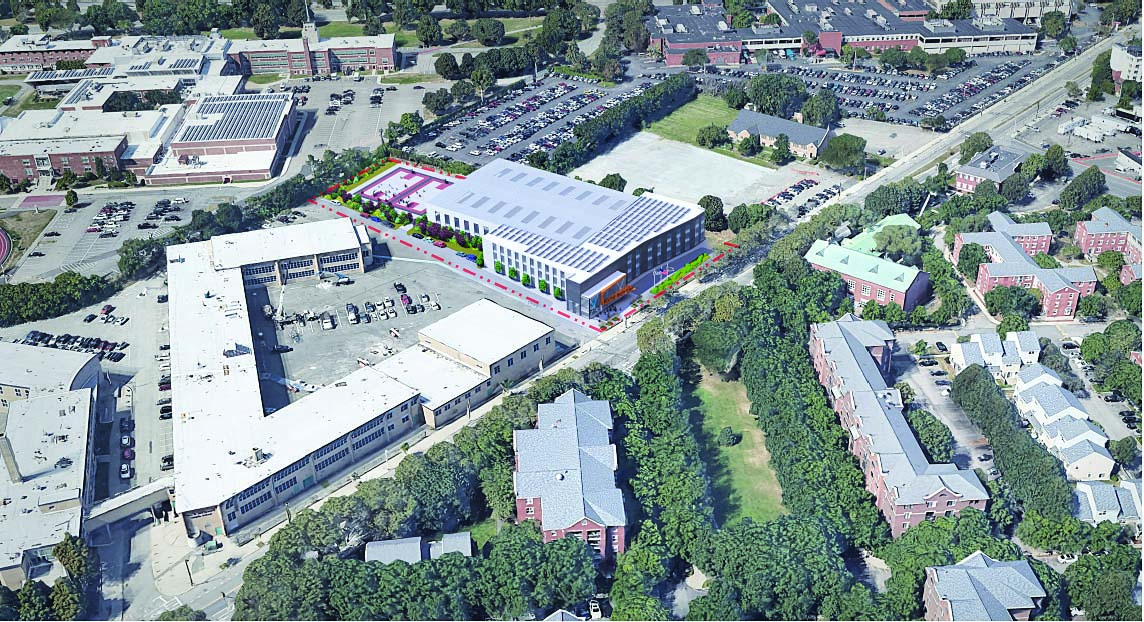 The Martin Richard Dorchester Field House, depicted above in an architect’s graphic, will be located next to what is now the McCormack Middle school, at left above.

This current proposal came in response to a BPS Request for Proposals (RFP) for the site along Mt. Vernon Street, an open space that is tucked in between the McCormack school building and a parking lot owned by the Archdiocese of Boston, which owns St. Christopher Church. The field goes largely unused most of the year.

As first reported in the Reporter last year, BPS officials sought and received unanimous consent from the School Committee to issue the RFP last spring. The concept, according to Rob Consalvo—a special advisor to the BPS Superintendent— is to activate and improve the BPS owned land. The RFP sought a private development team that would lease the land and create a new use that would benefit the school community and the larger Columbia Point and Dorchester neighborhood.

“Normally, this would be an expense [to the city] in the capital budget, but we think there’s an opportunity to partner with an outside private entity to build some sort of athletic facility at little or no cost to the city of Boston,” Consalvo told the Reporter.

In fact, under the terms of the proposal, any lease agreement would include no payment to the city of Boston for the land. However, the BGCD and Richard Foundation would be responsible for financing the construction and ongoing maintenance and operations of the building.

“The facility will be able to be used by any age groups,” said Consalvo. “The neighborhood will be able to use it, just as we encourage the communities around our schools to use our gyms and playgrounds. That’s a benefit for everyone, not just BPS kids.”

The proposal from the BGCD and the Richard Foundation was the only one that was submitted. The RFP was published and publicized— as all city RFPs are— in the City Record and the Boston Herald. The time frame for responses was June 24-July 19.

This month, as outlined in the RFP, the proposal will be presented to community groups, including a Harbor Point tenant organization, the school community and McCormack-Dever and the Columbia-Savin Hill Civic Association, which will see the full proposal at their next meeting on Monday (Oct. 7, 7 p.m.) at the Little House on East Cottage Street.

“What we agreed to do with the community was that before awarding it, we would come back out and see all of the RFPs," said Consalvo." We are honoring our commitment. We will take all that feedback back to an evaluation committee inside BPS.”

Scannell and Richard say that— if approved by BPS— they are eager to hold even further community meetings to solicit detailed input about what sort of programming and amenities should be built into the field house. 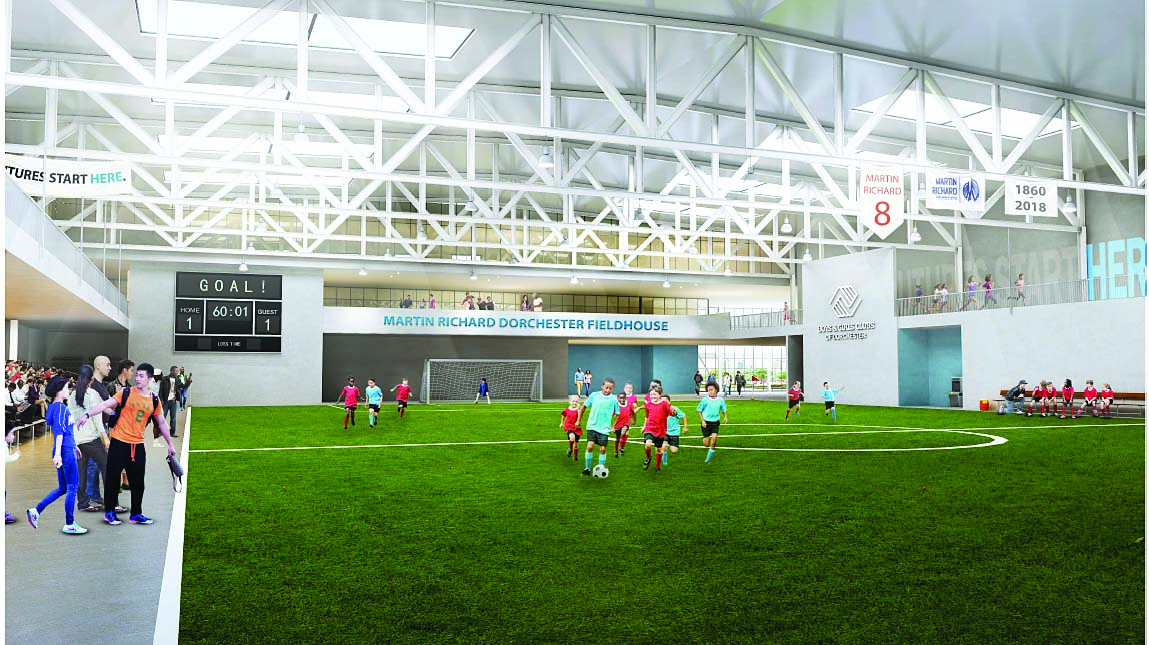 A rendering shows the potential for an indoor turf field in the proposed Martin Richard Dorchester Field House, which would be sited next to the McCormack School on Mt. Vernon Street under a proposal submitted to the Boston Public Schools this summer. Image courtesy RODE Architects, Inc.

The Martin Richard Dorchester Field House project represents the first phase of what Bob Scannell says is a two-phase capital campaign that the BGCD will launch this fall that will likely require more than $50 million in contributions. The second phase will include the construction of a new clubhouse on Deer Street, where the BGCD has been based for nearly 50 years.

“As an organization we have been serving the kids and families of Dorchester for almost 50 years and we’ve made a measured and thoughtful decision to plan for the next 50 years,” said Scannell.

Two other businesses with deep roots in Dorchester are key partners in the Field House proposal: Lee Kennedy Company, a construction management company; and RODE Architects, whose principal owners are Dorchester residents. Lee Kennedy serves as the chairman of the board of the BGCD.

The Richard Foundation has most recently been the key non-profit entity behind the creation of Boston’s newest public space, Martin’s Park, an inclusive play and open space which opened to rave reviews last summer. The experience, Richard said, gave the organization new insights into how it can fulfill its mission of helping kids of all abilities in his home neighborhood.

In a short time span, the foundation has emerged as a major supporter of youth organizations, including the Martin Richard Challenger Sports Program, launched in partnership with BGCD in 2014, which engages children and young adults with cognitive and physical challenges in sports leagues.