A DCR photo of the flooded Morrissey Boulevard.

For the last year, the only things visibly moving on Morrissey Boulevard have been cars and a few bicycles, at least when the flood-prone roadway isn’t inundated with seawater and left impassable.

A state-led effort to redesign the critical coastal roadway, on the other hand, has been publicly stuck in neutral since the most recent community meetings and comment period on the topic ended in December 2017.

This week, city and state leaders— notably Mayor Martin Walsh— told the Reporter that they want to see the project swing back into motion.

“I know people are frustrated and it’s been a long time,” Walsh said on Tuesday. “I think now we have to have a serious conversation about moving forward.”

Morrissey Boulevard is controlled by the state’s Department of Conservation and Recreation (DCR), which undertook a public process in 2016 to solicit opinions, show design options, and re-engineer key sections of the roadway with an eye on rising sea levels and increased development.

The project— which is not yet funded although design is still included in the five year capital plan—could cost as much as $40 million over ten years, according to some estimates. The agency envisions a modernized Morrissey as a parkway with better multi-modal paths and more greenery as it connects the upper tip of Columbia Point with Neponset. For climate resiliency purposes, parts of the roadway would need to be raised and drainage improved.

According to past statements from DCR, the agency’s plan is now at 25 percent design. Officials have said they still have to navigate a series of complicated easement issues and assess the project’s impacts on Boston’s streets.

But the agency has been noticeably quiet about how and when the project might resume a public engagement to resolve several thorny issues along the route, including the potential of adding dedicated bike lanes and potentially removing vehicular travel lanes.

Tony Lechuga, an Emerald Network program manager with the LivableStreets Alliance, said that at an April 11 meeting with the DCR commissioner transit advocates were told that the agency was looking at additional protections based on new thinking around climate issues.

“They’ve been very unclear about when we can see new designs,” Lechuga said, noting the project website still says the redesign will be at 75 percent in 2018. “DCR has often been a closed book to us and for me personally it has been extremely frustrating because we have made a good-faith effort to say this is a project that we fully support.”

On Tuesday, Governor Charlie Baker’s office declined to comment on the Morrissey Boulevard project, referring the matter to DCR, which had not made a statement on the record since March. After repeated requests for comment, DCR spokesperson Olivia Dorrance said in an email:

“The Baker-Polito Administration remains committed to the redesign and reconstruction of Morrissey Boulevard, and will continue to engage residents and stakeholders as it progresses further along in an effort to ensure the parkway meets the needs of the community and businesses while protecting critical infrastructure from the impacts of climate change.”

For Walsh, the time has come to revisit the planning in a public way.

“I don‘t think it's dead,” he told the Reporter. “I mean, it’s fluid. I think it’s been slow. It’s been moving since in the early ‘90s. I just think that it’s a matter of resources. I think that the DCR’s probably looking at making a commitment to it. But I think that we can all work together, look at some public-private investment now on the boulevard, look at having real strong conversations. I think now’s the time to have that dialogue.”

Meanwhile, the area around the boulevard is booming. Most of the major parcels on its northern stretch have changed hands and are being eyed for ambitious new development – the reinvention of the former Boston Globe site will come down the line first, set to be a tech, office, and community hub. Its neighboring parcels have been snapped up, as has the sprawling former Bayside Exposition Center site on Columbia Point.

In 1997, Walsh— then a state representative— lobbied to get the roadway reconstructed. An improvement plan devised by the DCR’s predecessor agency— the Metropolitan District Commission (MDC)— was never funded, although the state did fund the replacement of the Beades drawbridge. 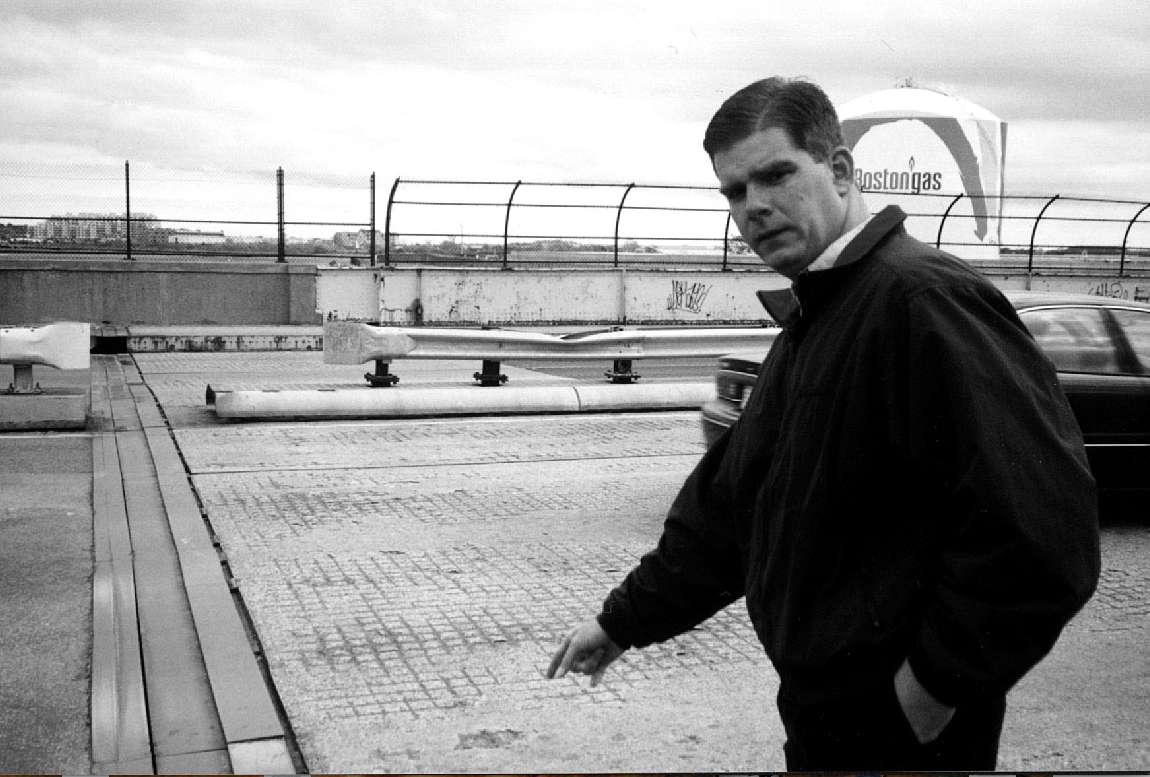 Above, State Rep. Martin J. Walsh pointed out his concerns about the conditions of the Beades bridge on Morrissey Blvd. in 1999. The aging bridge has since been replaced, but plans to modernize and raise the rest of the boulevard have been stalled. Bill Forry photo

“I think in light of all the potential development in there, maybe it’s good it didn’t happen back then,” the mayor said, “because there’s going to be a lot more congestion around that area, particularly around Bayside and the Boston Globe and the other sites down there. So, I think that we have to have a well-thought-out plan.”

Two years ago, the mayor echoed some neighborhood concerns over a boulevard design that would reduce the number of vehicle lanes in exchange for better signaling and roadway configuration, sending the project back to community meetings.

Related reading: From the Morrissey re-design mailbag: ‘Let’s get this going!’

Morrissey traces a long stretch of Dorchester coastline vulnerable to flooding and dramatic weather events. The Dorchester leg of the city’s Climate Ready Boston plan expects to move into public meetings this summer, officials said at a neighborhood coffee hour on Tuesday.

The DCR has an annual budget just north of $80 million and has spent about $191 million of the capital budget in the past five years through the DCR Engineering Division. This money includes funding for parkway and bridge projects, as well as trails, such as the Neponset Greenway, DCR notes.

Morrissey’s redesign was ballparked as at least $40 million back in 2016 when the new public process kicked off. For financial reasons, project managers have said, they expect the construction will need to take place in phases.

“In 2004, Governor Romney made the mission of DCR impossible by combining MDC and DEM (Department of Environmental Management) and at the same time cut the funding, so for the last 15 years the agency has been grossly underfunded,” noted Hunt, who worked at DCR prior to his election as state representative in 2013. His priority, he reiterated on Tuesday, is to “make sure this is maintained as a parkway and operated by DCR.”

For now, there are no scheduled public meetings on the Morrissey redesign, which could involve alterations to lanes and roadway heights since the last go-round.

State Sen. Nick Collins and Hunt serve districts that span the roadway, including the bustling area around JFK/UMass station, the middle stretch considered the most vulnerable to flooding and in need of raising, and the Clam Point and Neponset tips where new development may yet arise.

“Like most in the community, I am excited to move forward with this much needed project,” said Collins. “All residents deserve safe, accessible, and resilient roads, and with the effects of climate change clearer than ever, now is the time to act. As our city continues to grow, it is important that we leverage any large-scale developments to make significant, lasting improvements.”