Anthony Paciulli spent most of his adult life managing community banks, helping people to organize their finances and buy their first homes. These days, after retiring from leadership roles in banking and mortgage businesses, he has discovered a new passion: helping people find a resting spot for all eternity.

Paciulli is the interim superintendent of Cedar Grove Cemetery, a role he took on last March. Earlier, he had been deeply involved in the 101 year-old burial ground’s operations as a member of the board of trustees, which he joined in 2015.

The more he delved into the cemetery’s finances and history, the more he became convinced that it needed the sort of leadership skills and business acumen that helped him build a very successful community bank based in Lower Mills.

At first, Paciulli was part-time, but spend a few minutes with Tony— as most people call him— and you find out fast: He’s not a “part-time” kind of guy.

His latest obsession is carving out space for new plots and expanding the edges of existing cemetery sections. With the aid of surveyors, he thinks he has identified room for 1,000 new burial plots in the existing footprint of the cemetery. With some additional work he and his team can identify perhaps 2,000 more, Paciulli says. “I think we can find a couple of thousand more. That’s give us a 25, 30-year supply.”

As he walks briskly through Section 34— which backs up to private homes along Adams Street— Paciulli describes work that’s under way near a thirty-foot tall “feature” tree.

“There was a 20-foot culvert here and so we’ve filled this in and expanded Section 34 down here and we put this beautiful feature tree in,” he said. “Look at all these rows here. You can just visualize how many graves we’ve added.”

He gestures to his right, a smaller section of what is now just grass with no monuments. “Over here is going to be a cremation garden,” he says. “Fifty percent of burials in this day and age are cremations. It’s the new thing. Massachusetts runs a little bit behind, but it’s catching up. People want to go in the ground with a smaller thing and put a marker down.” 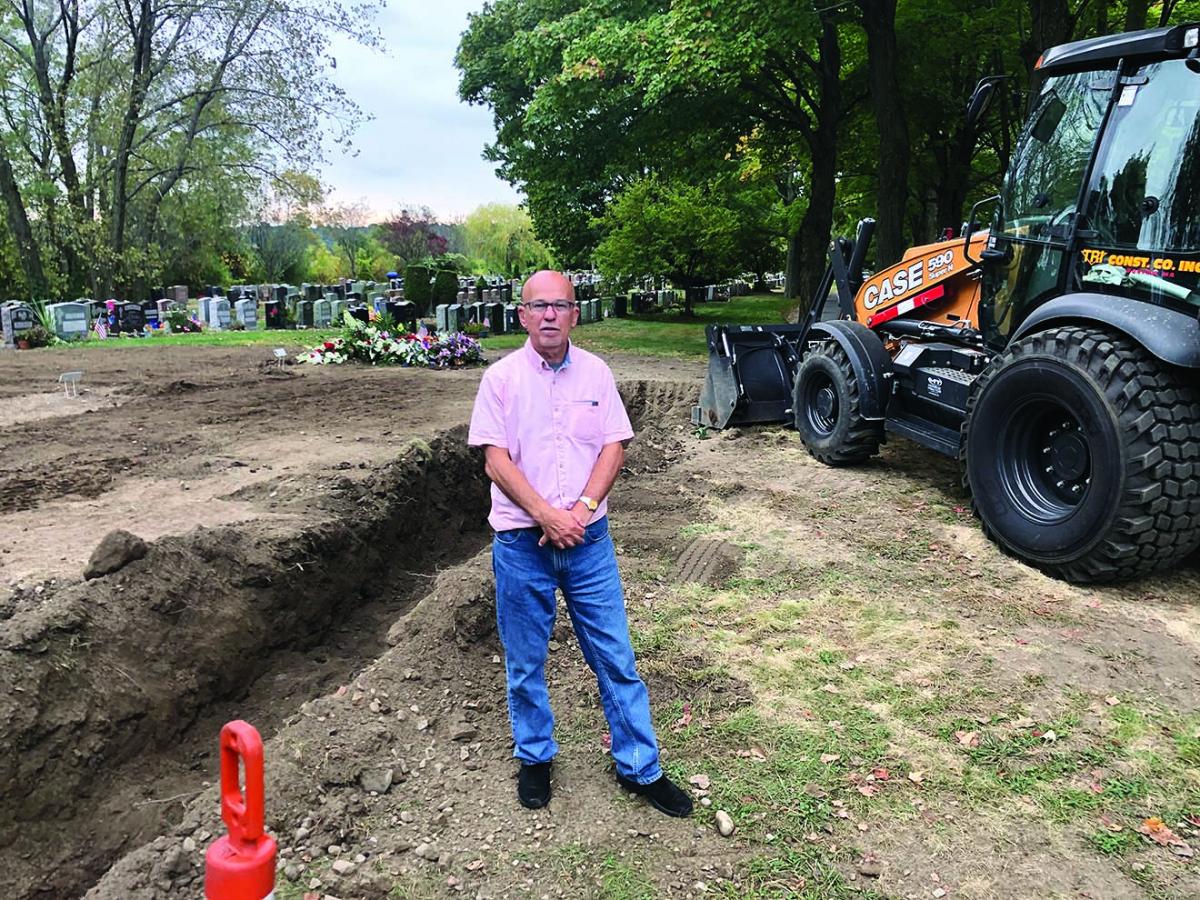 Cedar Grove sells about 150 burial plots each year, he says. On top of that, there are between 150-175 burials per year for people who were already accounted for in pre-purchased family plots.

But creating up to 2,000 more new burial spots is not his only challenge. There are, for example, long-deferred maintenance projects, such as the wrought-iron perimeter fence that needs partial replacement.

He wants to restore a now-disabled system of pipes to supply water to visitors who tend to memorial plantings throughout the cemetery.

And a greenhouse, which sits close to the Granite Avenue end of the property, could be enhanced, he says, to generate more income.

All cemeteries need to think long range about financing maintenance costs, he says, long after they have exhausted the limits of burial space. That means an endowment and new streams of revenue.

One near-term endeavor on Paciulli’s to-do list: The creation of a Friends of Cedar Grove Cemetery group that he hopes will bring in new volunteers to help with special projects.

“We’re planning have our first meeting of the new Friends of Cedar Grove Cemetery on Wed., Oct. 16, at six o’clock in the [Gilman] chapel,” he says, referring to the small church located just inside the Adams Street entrance of the cemetery.

“We only want them to come in a couple of times a year. Share ideas. I need someone who says, ‘I know how to do some research to maybe make get you some historical recognition. Or, I can look for some grants.’ ”

Last month, in what might be a first for the cemetery, the Gilman Chapel hosted a concert by a local reggae band. It’s all part of Paciulli’s campaign to put the cemetery into the public view more regularly. Other music nights are planned in the future.

“That’s why,” he says, “we’ve been doing the music shows: To get people to come in and talk to us.”