A new exhibition at UMass Boston’s University Hall Gallery titled “Dot Now” features work from a diverse group of a dozen artists based in Dorchester or with significant connections to the neighborhood.

“Inspired by requests from our visitors to highlight more local artists, ‘Dot Now’ presents artworks made by artists living and/or working in our neighborhood of Dorchester,” reads a press release about the exhibit, which continues:

“The exhibition seeks to foster a stronger sense of community between artists in the area and UMass Boston while celebrating their work within the Greater Boston Area. ‘Dot Now’ gathers a set of intergenerational artists who are working in a variety of media, connected through their locale and shared social concerns, but distinctive in their artistic practices and personal narratives.”

Among the artists spotlighted in the collection is Joanna Tam, who is based at Dorchester Art Project in Fields Corner. Her piece, ‘Make a Wish for Dorchester,’ presents a visual and auditory portrait of the neighborhood in Dorchester residents’ own words.

“For this project, I have done audio interviews with people who live, work, or study in Dorchester to share their personal stories about Dorchester and their thoughts about home, community and how to make Dorchester a even better neighborhood,” said Tam.

“The audio material is played at the gallery,” she said. “I want gallery visitors to learn more about Dorchester and its people through the voices of the people who have connection to Dorchester. It is important to me that the voices of ordinary people to be amplified at a prominent institution like UMass Boston, which is also in Dorchester.” 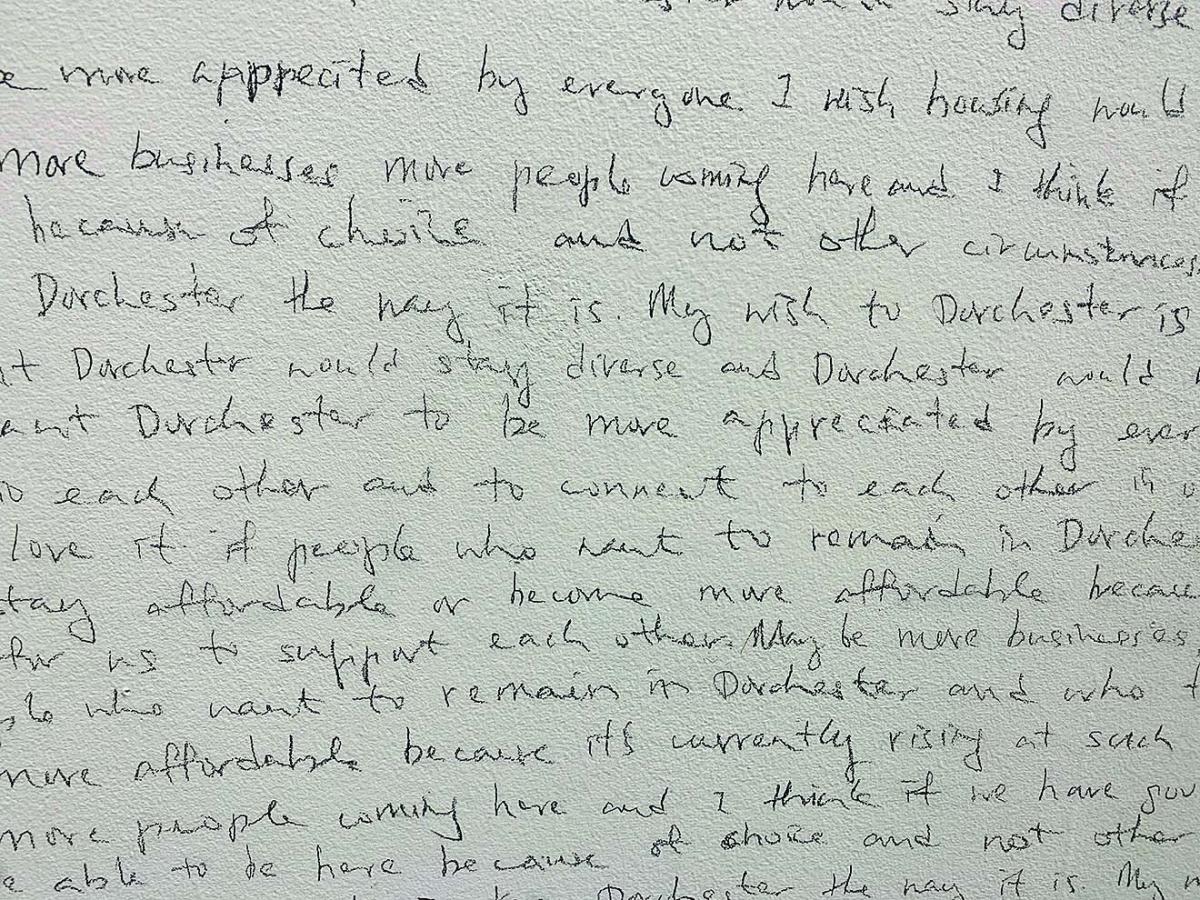 In addition to the recording, ‘Make a Wish for Dorchester’ also includes a section of wall on which Tam has written in pencil some of the most common responses and wishes from interviewees, as well as a book in which viewers are invited to write their own wishes for Dorchester.

Another artist whose work is displayed in the exhibition, Andrew Mowbray, crafted two pieces out of milk crates and driftwood that he salvaged from the shores of Dorchester.

The first work, titled “Raft,” is a group of six block-shaped sculptures made of “reassembled castaway driftwood cut offs” that anchors the center of the exhibition. The second work, “Milk-crate Column,” is a floor-to-ceiling height tower of found and gathered milk crates that Mowbray describes as “a selected Taxonomy of modular forms from past to present.” 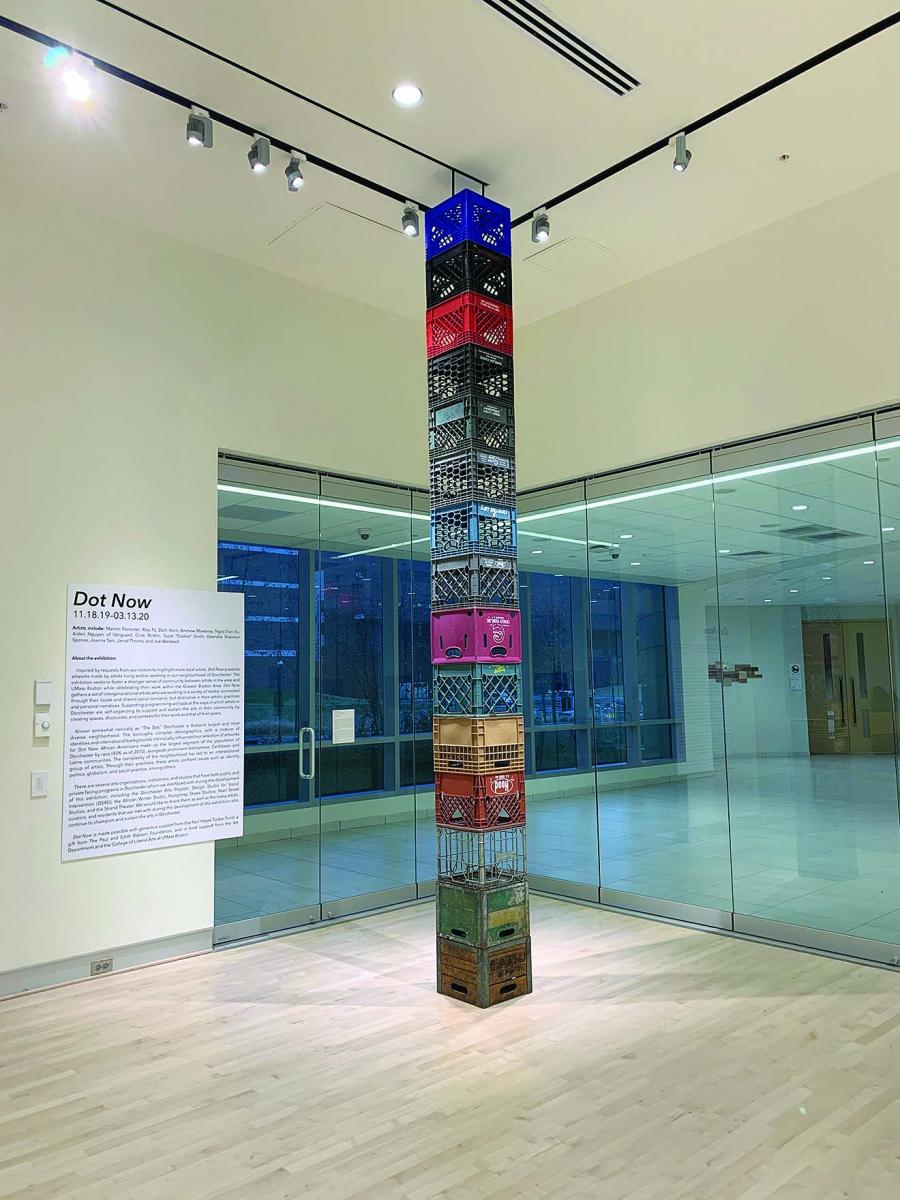 “My work is often project based,” said Mowbray about his artistic vision. “I look a lot at common ubiquitous objects and materials found in the urban environment, and I think about how they are used and whom they serve...in this work, I am interested in exploring and archiving the milk-crate’s use as a functional, architectural object within the urban environment and within the gallery.”

“SEIU 32BJ (Francisco)” is a portrait by Zach Horn, a Savin Hill resident who is an artist and lecturer at UMass Boston, that depicts Francisco Gil, a member of the cleaning crew at UMass Boston. The work is a selection from Horn’s ‘United We Bargain’ exhibition that spotlights workers who “normally are considered numbers in the system of a corporation, company, or in this case a state university.” 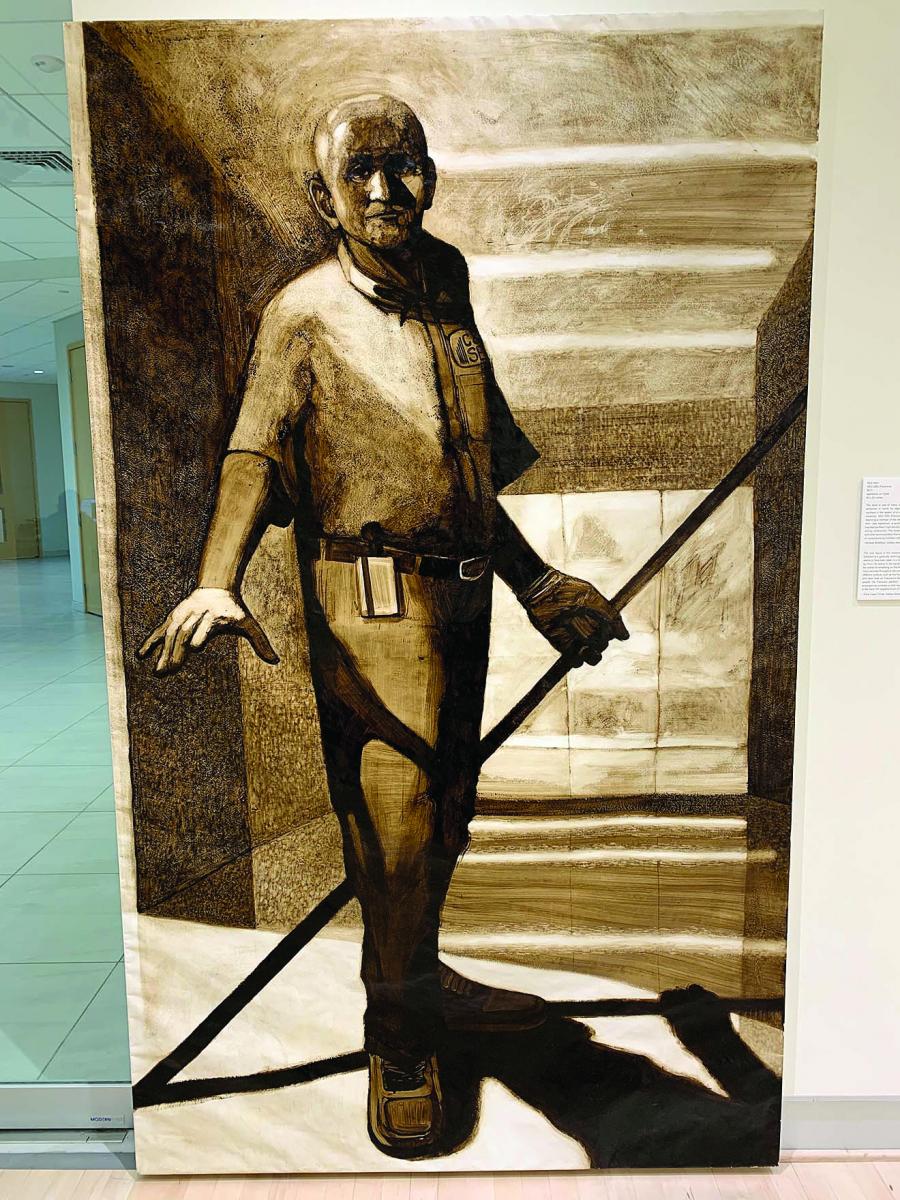 For the piece, Horn used asphaltum, a quick drying tar-like asphalt paint, which he applied to Tyvek, a synthetic polyethylene fabric used to protect buildings during construction. The materials “allude to the labor of construction and other service workers that are oftentimes only recognized by companies or corporations as numbers rather than individuals.”

Ngoc-Tran Vu, a visual artist and activist who is an active member of the Dorchester community, contributed her photograph “My Vietnamese Father” to the exhibition. The photo depicts her father holding a second, older photograph of himself from his time as a soldier in the Vietnam War.

“I took this photograph in 2007, I believe,” wrote Vu. “It was a family project I did when I was working in the darkroom heavily. I was photographing my family in the everyday when I saw a photograph of my dad when he was in the South Vietnamese military and I asked him to hold it up for me by the light. The context of the photograph is of my dad while in his first year of military school training in 1970. He later became a lieutenant in the South Vietnamese army. 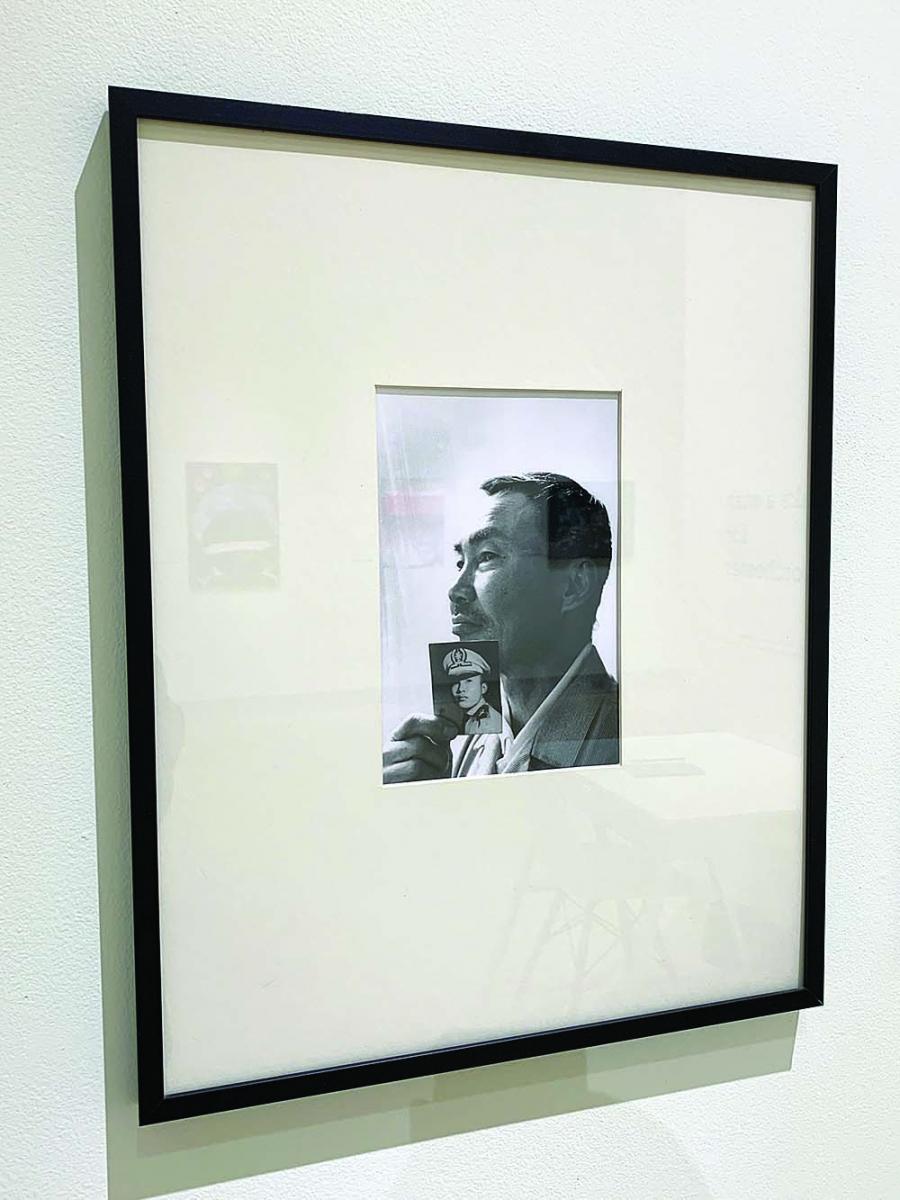 “Consequently, it was because of my dad’s involvement in the war that my family and I were able to come to the US as political refugees through the Humanitarian Operation (HO) program in the early ‘90s as part of the third wave of Vietnamese resettlement.”

In much of his recent work, Dorchester-bred artist Marlon Forrester has utilized elements of basketball culture to evoke ideals of transcendence and issues of race associated with the game within American popular culture.

In his piece “Ballupface,” he uses ink and collage to depict a black figure wearing a “ball up face” expression, a look of intensity and preparedness to play in a game. 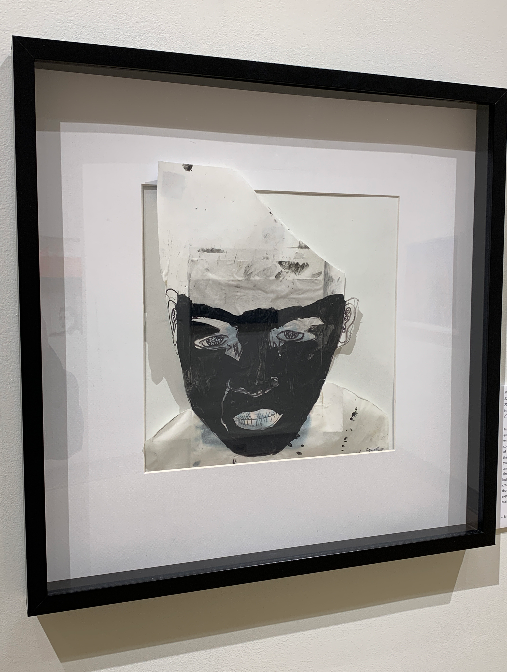 According to Forrester, his paintings, drawings, sculptures, and multimedia works “reflect meditations on the exploitation implicit in the simultaneous apotheosis and fear of the muscular black figure in America.”

The artist and Savin Hill resident Cristi Rinklin turns her artistic lens on the issue of climate change in two pieces from her “HARBINGER” series, inspired by the ongoing process by which rising temperatures are melting the Siberian tundra and releasing methane gas into the air. Rinklin’s painting depicts a thermokarst, a hole or depression formed by thawing ice, to create “an unsettling feeling of depth and impending danger.” 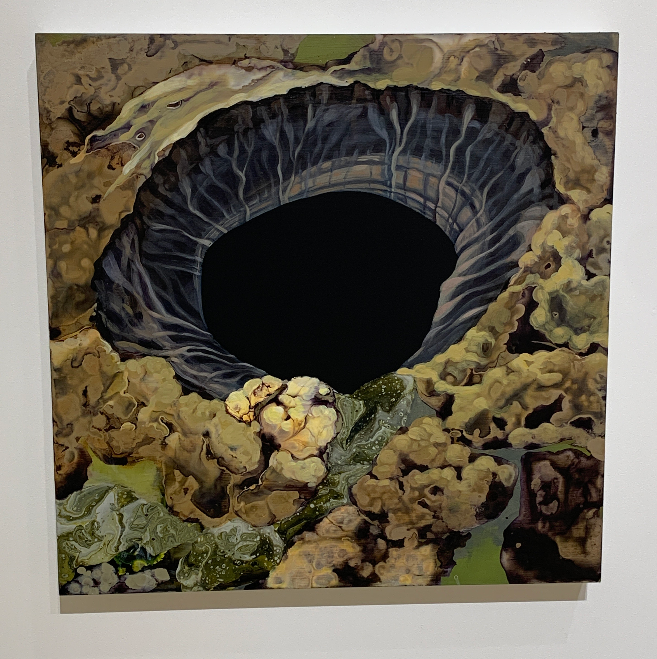 Joe Wardwell, who lives in Jamaica Plain but works at Humphreys Street Studios in Dorchester, layered stencils to create his piece titled “What Causes the Room to Shutter.” The work combines a scene of a sunset with superimposed lyrics from 1970s Boston punk band The Girls’ song “Jeffrey I Hear You” to create an unsettling feeling. 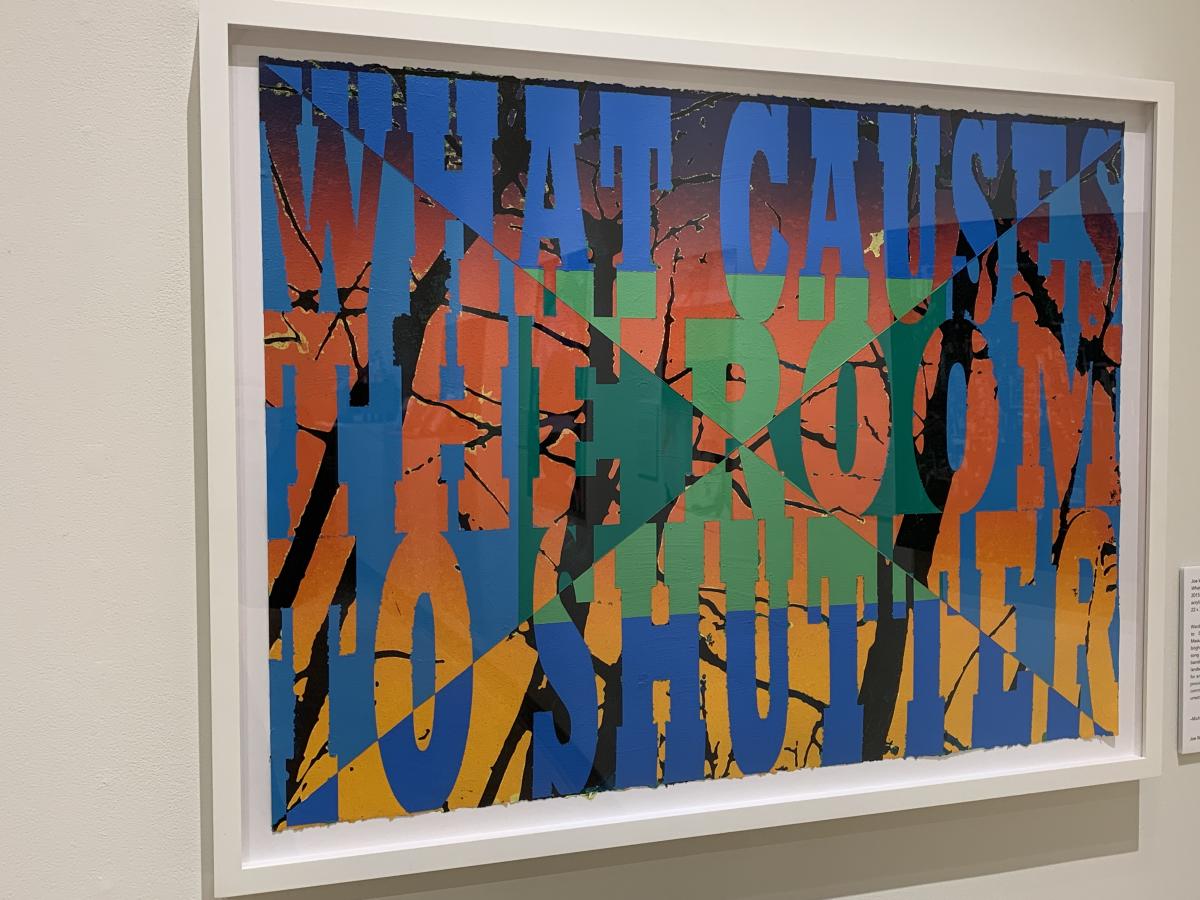 Jamal Thorne, another artist based out of Dorchester Art Project, uses an interpretation of hip hop duo Run The Jewels’ album cover design as the centerpiece of his work “Untitled #22.” While the album cover features a hand shaped in the likeness of a gun and a closed fist grasping a gold chain, Thorne’s mixed media piece includes partial fragments of a real gun as well as layered boxes of tape and peace symbols to form a collage that illustrates his anger about racial and gun violence across America. 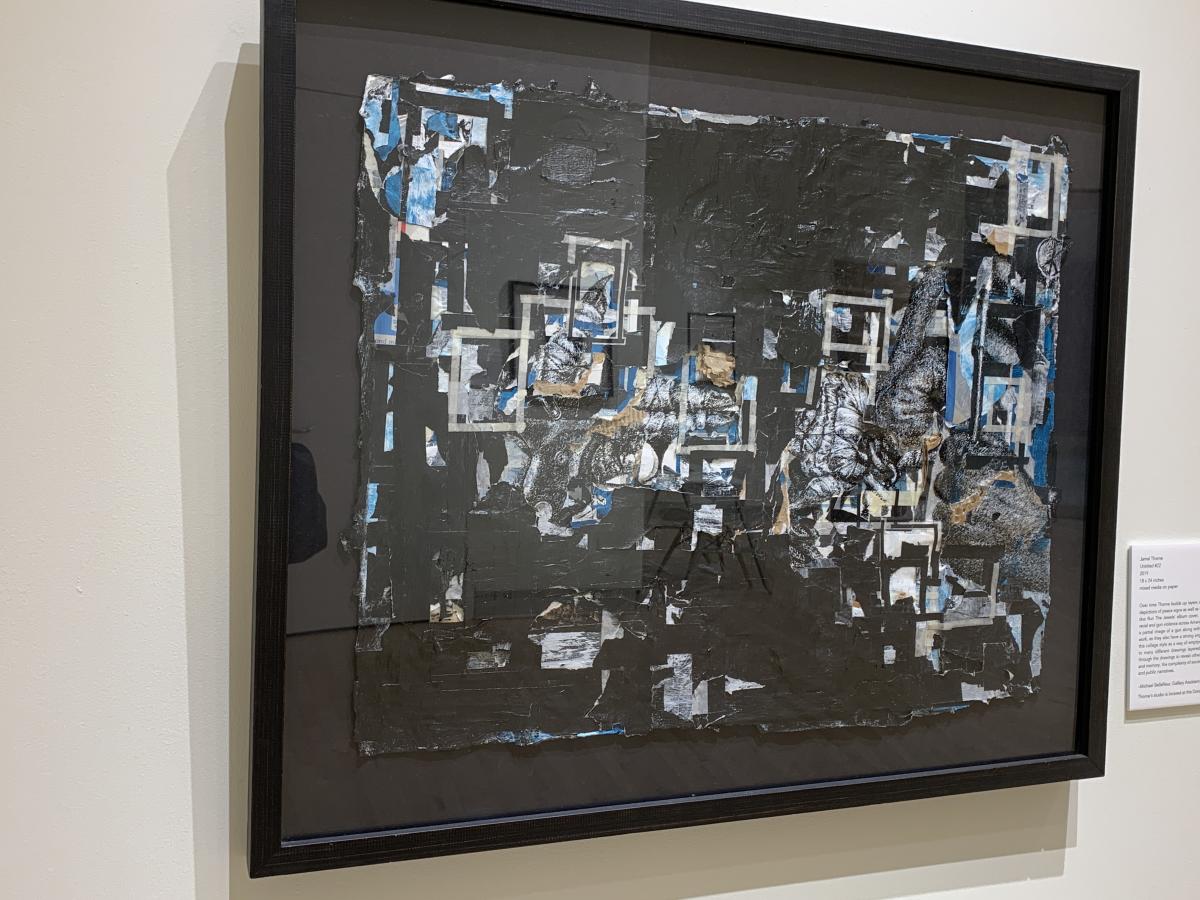 The way Thorne layers complex drawings and media on top of each other, then cuts through them to reveal different pieces underneath relates, he says, to “time and memory, the complexity of societal issues, and the collision of personal and public narratives.”

Rixy Fernandez, a recent graduate of UMB’s Art Department, used her 2019 Ruth Butler Travel Scholarship to travel to Mexico City to explore the city’s graffiti and street art culture. She created her featured piece during that trip.

“Another Round,” said Fernandez, “is inspired by fighting and aggression in video games, and was a result of fury due to various situations. When unbearable, my emotions created the textures and accents shown, asking myself if I wanted to continue fighting during a ‘time-out.’ 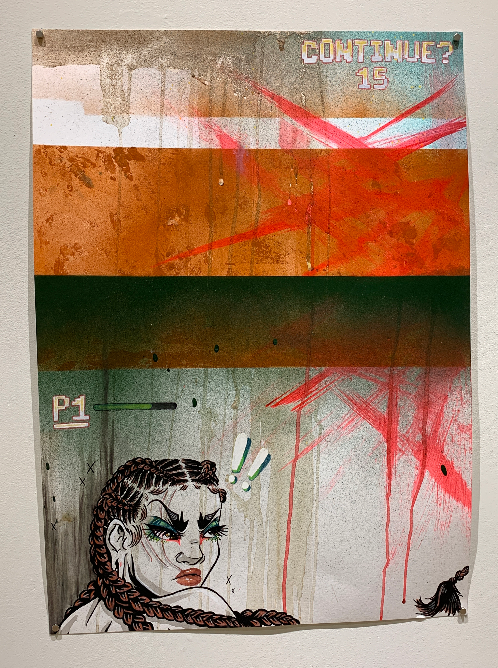 “The series [that the work is from] collectively expresses my various emotions and their details that arose in each moment. Without constraints, planning, or a second shot, it became therapy to release a feeling of a relationship onto paper; not only the one with myself, but one of a new journey and myself. I surrounded myself with all my tools and mediums, and allowed my intuition to tell me what connects to the feeling.

Cardboard, glass, and steel wanted to touch the purity of the page. Colors and texture had dialogue, and they wanted to shape the composition a certain way with a specific tool. From start to end, it became a conversation where everything spoke, until it stopped – then the diary entry itself stopped.”

Deandra Shannon Spence, a student at the Helen Y. Davis Leadership Academy in Fields Corner, is the youngest artist to ever have a work shown at University Hall gallery. Her untitled piece draws from elements of afrofuturism to depict a black woman with an afro set against a cosmic backdrop of stars and planets. A pink brush stroke obscuring the woman’s eyes, she says, “could be seen as symbolizing the erasure of vision and access to sight, or enlightenment through the transcendence of art.” 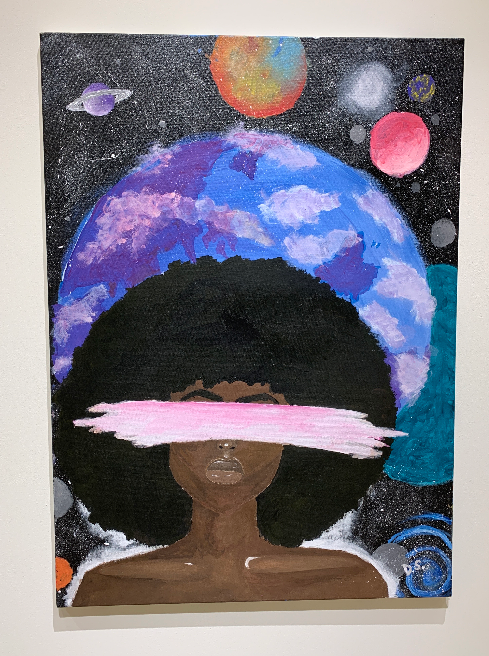 Fields Corner native Aiden Nguyen and co-collaborator Thanh Mai created Vanguard, an underground art and poetry zine, with the intention of creating a safe platform for the visibility and individuality of self-identifying lesbian, gay, bisexual, transgender/trans, and queer (LGBTQ) Vietnamese artists and writers. Several copies of the zine are on display at the Dot Now exhibition as part of a collection, which was the subject of a Reporter story on May 15 of this year. 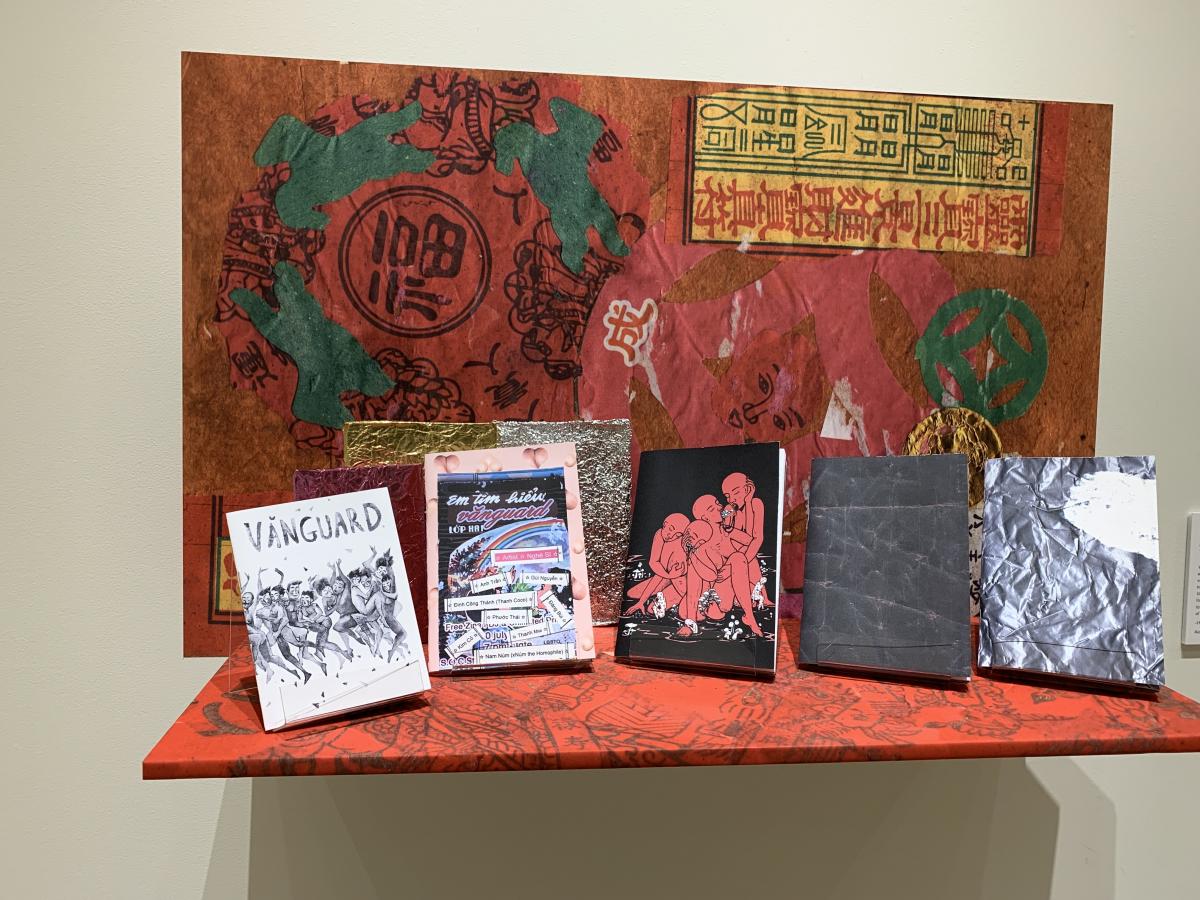 Mount Bowdoin resident Suzie “Cookie” Smith made “Cara’s House,” a sculpture made of crimped cuttings of aluminum cans, wood, and collaged photos, with the aim of forming a miniature model of her grandmother’s home in Alabama. A portrait of her grandmother adorns the roof of the model house, which is decorated with a pattern of colors and photos resembling a patchwork quilt. Smith said the memory of her grandmother and the historical significance of the house, which she now owns, inspired her to craft the sculpture:

“She built it and owned it until the day she died in August of 2001,” wrote Smith. “Her home sits on a parcel of cleared land that is located adjacent to her sister Rosie Steele’s farm. This is of historical significance because this land is located on the Selma to Montgomery National Historic Trail. 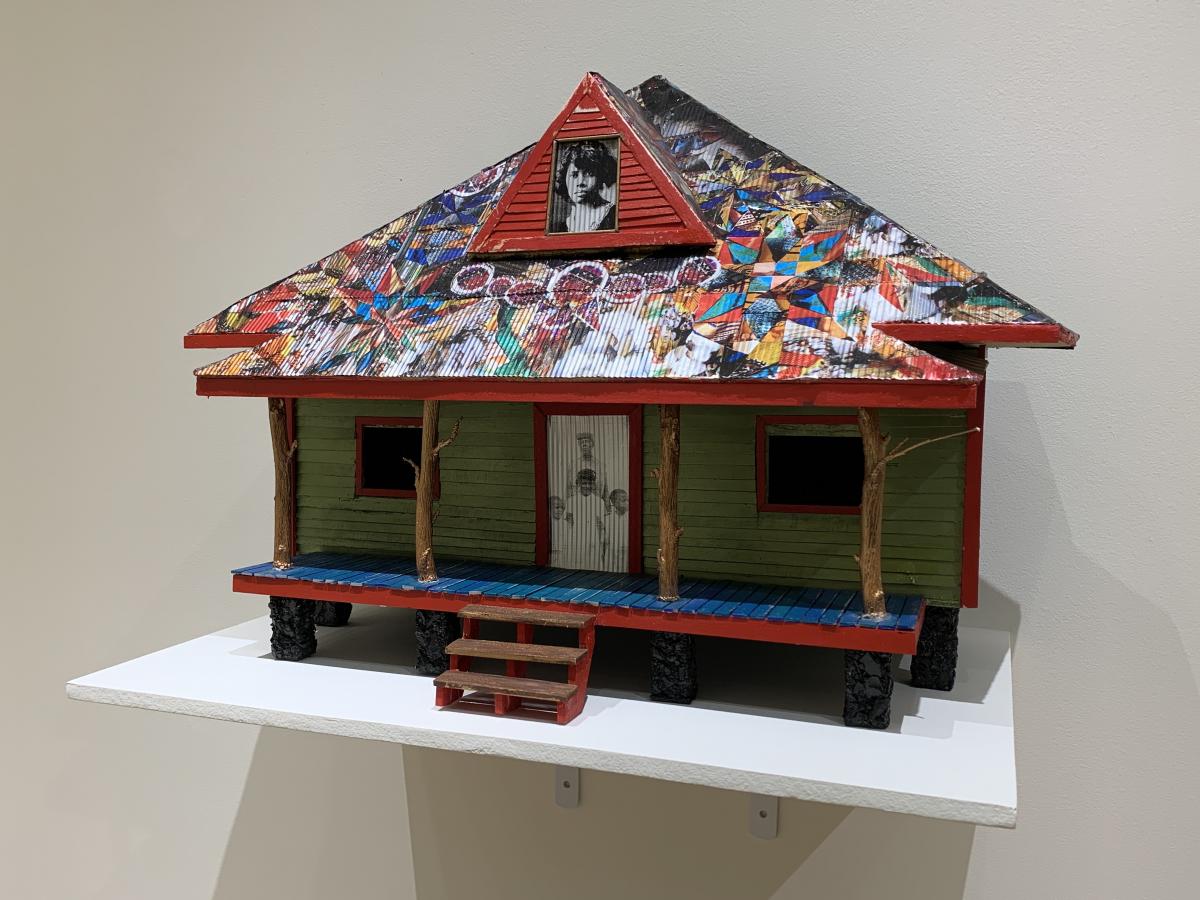 “On March 22, 1965, this land served as Campsite #2 for marchers walking 50 miles from Selma to Montgomery, Alabama, fighting for the right to vote. A sign was erected on the site by the National Park Service to commemorate this historic event. I see Cara’s house as a bridge that links our family to a remarkable past that we must never forget.”

“Dot Now” will be on display at UMass Boston’s University Hall gallery through March 13, 2020. Gallery hours are daily from noon to 6 p.m. This exhibition is made possible with generous support from the Paul Hayes Tucker Fund and a gift from The Paul and Edith Babson Foundation.