At a community meeting hosted by the Boston Planning and Development agency (BPDA) last week, associates with the Herb Chambers Companies presented plans for a new four-story headquarters setup for their Honda dealership that opened earlier this year at 710-720 Morrissey Blvd.

If approved, the multi-story complex would comprise some 112,600 square-feet of space for showrooms, offices, service bays, vehicle storage, and customer lounges and amenities.

Preliminary plans indicate that the project would allocate space for roughly 222 cars within the building, including inventory, and about 178 outside spaces surrounding the dealership.

Paul Losordo, corporate counsel for the Chambers Cos., introduced the development team and offered some background. “This dealership was located for over 20 years at 1186 Commonwealth Ave, but,” he said, “we had other uses for that property and we were asked by that community to try to keep [the dealership] in Boston, which was not easy because wherever we go we compete with developers. We bought [this site] and moved in at the beginning of 2019.”

“The goal,” he added, “is to create a four-story, state-of-the-art building instead of having the old-style building where everything is moving around outside. We want to bring the cars inside and have high-speed doors… So the point is, to spend money to internalize the operations.”

Losordo said that the plans had been presented to both the Pope’s Hill and Clam Point Civic associations last summer and they had been “favorably received.” He also noted that residents at the meetings said they would prefer the dealership to another development.

James Mullarkey, an architect with the Curtis Architectural Group, went over the specifics of the building proposal.

“The idea is to make the building look more like an office building than a car dealership by using a lot of glass,” he said, adding that the building’s exterior, which would be made of metal panels and glass, would “look good and maintain well.”

In noting that “Herb Chambers has made the decision to keep all of the vehicle storage inside the building,” Mullarkey said, “That’s key in a site like this because of its city location. Keeping the cars inside eliminates the satellite parking lot. We are trying to be sensitive to the location that it’s in,” he added. 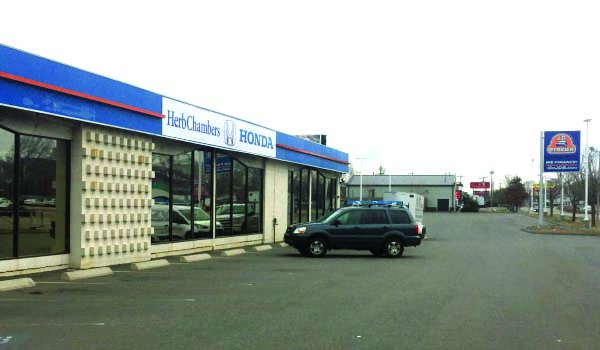 The existing Herb Chambers Honda dealership at 720 Morrissey Blvd. would be replaced with a new building under a plan now in a design phase. Reporter file photo

Campbell then opened the Q&A session of the meeting, giving John Lyons, president of the Port Norfolk Civic Association, the opportunity to point out some concerns he had with the proposal.

“I want to open by saying I’m not here tonight to oppose your proposal or to impede progress, but I do have some particular concerns here. The first one is height and building mass. I think it sets a bad precedent,” said Lyons.

“Although Morrissey has transformed recently into a regional transportation artery, it traditionally was a parkway,” he said, “and there is a major project being considered by DCR and MassDot to bring it back to the parkway. I don’t think a building with that mass and amount of glass, obviously intended to function more like a billboard than a window, is appropriate. It’s not what we want here,” added Lyons.

Maria Lyons, also with Port Norfolk Civic, then spoke up. “I just don’t think people understand and appreciate this area for exactly what it is,” she said. “We’re a waterfront area. The location just doesn’t get the respect it deserves. It’s part of an area that is under critical environmental concern and there are significant local and migrating bird populations nesting there.”

She added: “The people in Dorchester have been separated from their waterfront and by putting in these big buildings we’re just going backwards. I just plead with you. The height is an absolute problem, you’re blocking sea breezes, cutting off views, and you’re changing the environment.”

In response, Losordo said, “There’s only so much we can do” to compromise. “Just going away and not building anything I suppose is an option. More likely it would get sold to somebody who might build something else.”

Losordo noted that the development team is taking into consideration both environmental and climate change factors related to flooding, saying, “we will be going through a conservation process and a lot of those things will be discussed.”

A handful of union workers who came to the meeting asked the development team to consider employing union workers for the project.

“I feel like the community might be a little bit more comfortable if you could give some guarantee for union labor. We’ve been having a really tough time with non-union workers getting a good amount of work. I understand it’s cheaper, but you’re also not paying them benefits,” said Josra Reyes, a Local 7 union Iron Worker.

“We have so many skilled workers, and when it comes down to it ,you guys are just going to take the bid that costs less,” he said. “You’re not doing the community any good by giving someone else the job when locals are here in Dorchester.”

One participant, Ben Johnson, offered what he saw to be a reasonable way to go forward with the discussion between opponents and the Chambers Companies.

As the meeting closed, Campbell confirmed that he would schedule an Impact Advisory Group (IAG) session and he urged attendees to join in that event. He also said that he would be extending the project’s public comment period.

“I think we can deal with a lot of these issues with the IAG meeting,” said Campbell, “And we are definitely going to have to come back out here for a public meeting to get some answers to a couple of dozen questions.”