Donnie Wahlberg: In Dot, you ‘earn your keep’

Walk into the Wahlburgers in Hingham and you’re greeted with a merchandise kiosk that says “Dorchester to Hingham.” On the wall there’s a huge image with a map of Dorchester, a row of three-deckers, and a story about the nine Wahlberg kids growing up with little to call their own. Then there’s the menu: the “OFD” – Originally from Dorchester – burger, and the thousand-calorie “triple-decker” burger, topped with “government cheese.”

It’s the merchandising of Dorchester culture, or at least one element of it.

“Being from here, I’m going to roll my eyes at it,” explains Chris Hislop, a Dorchester native who works the counter at a deli in the Polish Triangle, “because I work at a place that actually is working class, and is true to its roots and its heritage.”

The deli is just a few blocks from the future Wahlburgers spot inside the South Bay Town Center. Hislop says the restaurant chain is perpetuating stereotypes about his hometown – and it’s not a good look on the neighborhood.

“I don’t want the same thing that happened to Southie, where people make movies in Boston, [and] all they do is they want to have that Southie experience with the mobsters,” Hislop said. “I don’t want people to think of Dorchester as this exclusively low-income housing neighborhood that the Wahlbergs came from, and now they got out and made a ton of money and have a restaurant chain.”

As Hislop scoffs at the notion of his old neighborhood becoming a corporate theme, Wahlberg fans like Dan Middleton – who recently trucked his family to the original Wahlburgers in Hingham — say there’s no cooler place to grab lunch.“I had the double [decker] burger with fries, my son had the bacon macaroni with cheese, and my daughter had the Fiesta burger,” he said.

The Wahlburgers restaurant was actually part of the reason the Middletons came here on vacation from upstate New York. They watch Donnie Wahlberg’s show “Blue Bloods” religiously – and at home they even have a replica teddy bear from Mark Wahlberg’s movie “Ted.”

That’s about to change. 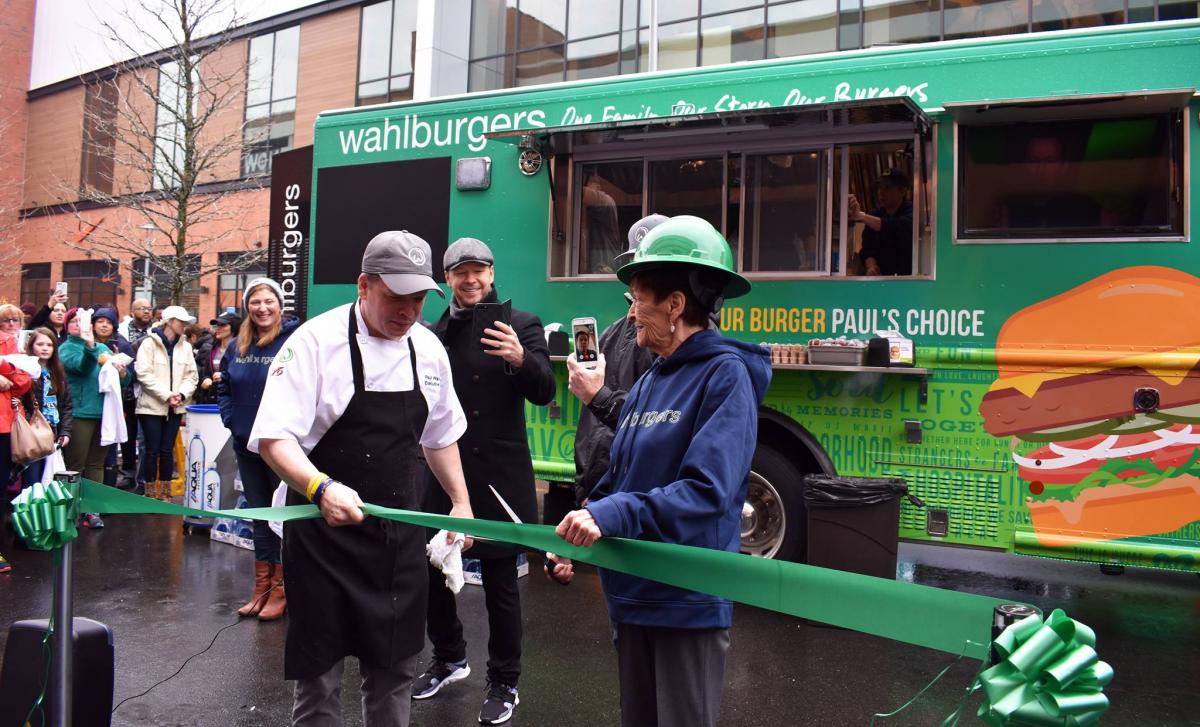 The Wahlberg clan, including matriarch Alma Wahlberg, celebrated the launch of a Wahlburger's food truck and the future home of their first Dorchester restaurant at the South Bay Town Village, last month.

“It feels great to be here in Dorchester!”

After more than two dozen Wahlburgers locations have opened across the country – including four in Massachusetts — Dorchester will have its first in the fall. The Dot Wahlburgers will open in a $200 million mixed use development – the expansion of the South Bay shopping center. It’s next to a Starbucks, a Nike store, and a gleaming AMC movie theater, with a hotel and several hundred units of housing under construction.

This historically blue collar part of the city is now at the head of a real estate boom, and it offers the opportunity the Wahlbergs needed to open their restaurant in their old neighborhood.

At a launch event at South Bay last month, Donnie Wahlberg worked his fans into a frenzy outside a Wahlburgers-branded food truck: “It feels great to be here in Dorchester!” he said, stressing the silent “ahs” at every “ar.” “Born and raised right up the street at St. Margaret’s Hospital.”
“I should know,” chimed in his mother, Alma Wahlberg, who was at Donnie’s side. “I went there nine times!”

But for some Dorchester folks, there’s irony in a working class brand opening in one of the most rapidly modernizing parts of the city. Asked by a reporter how he feels when people say they should have opened in another part of the neighborhood, Donnie said nobody’s ever raised that with him.

“Who says that?” he asked. “I’ve never heard anyone say that, so I’m not really sure where that comes from, but certainly you could say that we saved the best for last. And certainly you could say that we had to learn to get it right before we brought it back to Dorchester, because if we show up in Dorchester and screw it up, that ain’t gonna look good.”

Donnie says Hingham was the first Wahlburgers location because the chef in the family - Paul Wahlberg - lives there. “South Bay was supposed to be the second location in the country after Hingham,” he said. “Obviously, Dorchester was high on our list. It was always in our sights. There was never any question [about that], but it was a matter of when.”

Gentrification: Its ups and downs

For the scrappy matriarch of the Wahlberg clan, it’s a joy to see the family restaurant going into her old stomping ground. But with gentrification in full swing, Alma Wahlberg laments the things Dorchester is losing. She recalled the community she knew growing up.

“They tried to evict a family and we wouldn’t let them in to evict them,” she said with a chuckle, speaking to reporters at the launch last month. “We all stood in front of her apartment -- hysterical! – but that’s the way it was then. We all looked out for each other. Honestly, sometimes I feel like somebody could have passed away in their apartment today and you may not know it for two weeks.”

Of the six Wahlberg brothers and three sisters – only Bob Wahlberg remains a resident of Dorchester. The seventh sibling (Donnie and Mark are eight and nine), Bob has also done some acting — he appeared in “The Departed” alongside Mark and was in the 1999 movie “Southie” that starred Donnie. But he couldn’t be more of a contrast to his younger brothers. He lives in a humble single-family home near Neponset Circle with his wife and two kids and works for the power company.

Bob says he sees the downside of the neighborhood’s boom-time and he understands why some people would prefer to eat a triple-decker burger among actual three-deckers instead of in South Bay.

But the decision wasn’t his. After all, Wahlburgers is a business.

“There’s a team that looks for locations and they have to make sense,” Bob said in an interview last week. “And I have no part of that because if I did I would’ve put it right around the corner from my house. But I was pushing for a couple of locations, one in Neponset Circle and one nearby in Savin Hill. But, like I said, it has to make sense and this place really was a home run.”

Defenders of the Wahlbergs cast their critics as haters who want to drag down a successful family. But a legitimate beef with the family can be found among those who knew them as teen troublemakers.

“The Wahlbergs were a tough crowd in its day in Dorchester,” says Bill Walczak, a longtime Savin Hill resident and activist who co-founded the Codman Square Community Health Center. “I don’t think the Wahlbergs had any impact during their period of growing up that was positive on the neighborhood,” said Walczak, referring specifically to Mark, Donnie, and James.

“I moved right next to Savin Hill Park in 1981 and the Wahlbergs were part of a group of kids that used to go into the park and cause lots of problems. There were fights up there, there were tons of cases of beer and smashed bottles, and all sorts of problems that were involved with them in their teenagehood.”

And, Walczak said, there’s still glass on the ground at the park. But that was probably the least of it.

In 1988, Mark Wahlberg was convicted of assaulting two Vietnamese men and did a stint in jail for it. Nearly 30 years later, he petitioned the state Parole Board to scrub the crimes from his record. But the scrubbing never happened, and Wahlberg later said he regretted even raising the issue.
That history still sits uneasily with people like Walczak. But others have nothing but positive things to say about the Wahlbergs.

Wahlburgers “is something that was created in Boston, created for Boston,” said Amir Shakir, an old associate of Donnie and Mark Wahlberg who grew up in Roxbury and now lives in California. “This is us, just appreciate it. This is us worldwide.”

Shakir, who also uses his performance name, MC Spice, shares the credits in the biggest hits of Mark Wahlberg’s early ‘90s group Marky Mark and the Funky Bunch. He says his years working with Donnie and Mark were among the best in his life.

As for their teenage years? “I think that that’s water way under the bridge, but I also think… that was the Dorchester we came from. And what happened happened,” said Shakir.

And despite its flaws as a neighborhood, Dorchester is a place a lot of people are proud of. One of them is James Dolan, who was a district court judge in the neighborhood in the ‘70s and ‘80s — when the Wahlberg boys were coming of age.

That sentiment is prevalent among those familiar with the work of the Mark Wahlberg Foundation, which has spread its philanthropic largesse across greater Boston, especially in Dorchester. From its launch in 2001 through 2012, the foundation has dispersed millions of dollars in grants, mainly to youth-oriented programs in city neighborhoods. The Boys and Girls Clubs of Dorchester has been the largest single recipient – about $4.2 million and counting.

“The impact is enormous,” says Bob Scannell, the president of the Dorchester facility. “And that doesn’t even include tens of thousands in scholarships, and the film studio Mark built for us.”

Wahlberg serves on the club’s board and his foundation sends hundreds of its teens to summer camp in Maine each year for free while also directing more money to other local causes, like the annual Mother’s Day Walk for Peace, a Dorchester tradition since 1995.

“The one thing that’s so clear to me – with all of the Wahlbergs – is that they don’t forget where they came from,” says Scannell. “I know so many millionaires who grew up here and won’t give this place the time of day. What they do as a family is pretty special, actually.”

The Reporter and WBUR 90.9FM, Boston’s NPR News Station, have a partnership in which the news organizations share resources to collaborate on stories. Simón Rios is a WBUR reporter who is currently working from the Dorchester Reporter newsroom. He may be reached at srios@wbur.org. Reporter editor and publisher Bill Forry contributed reporting to this story.